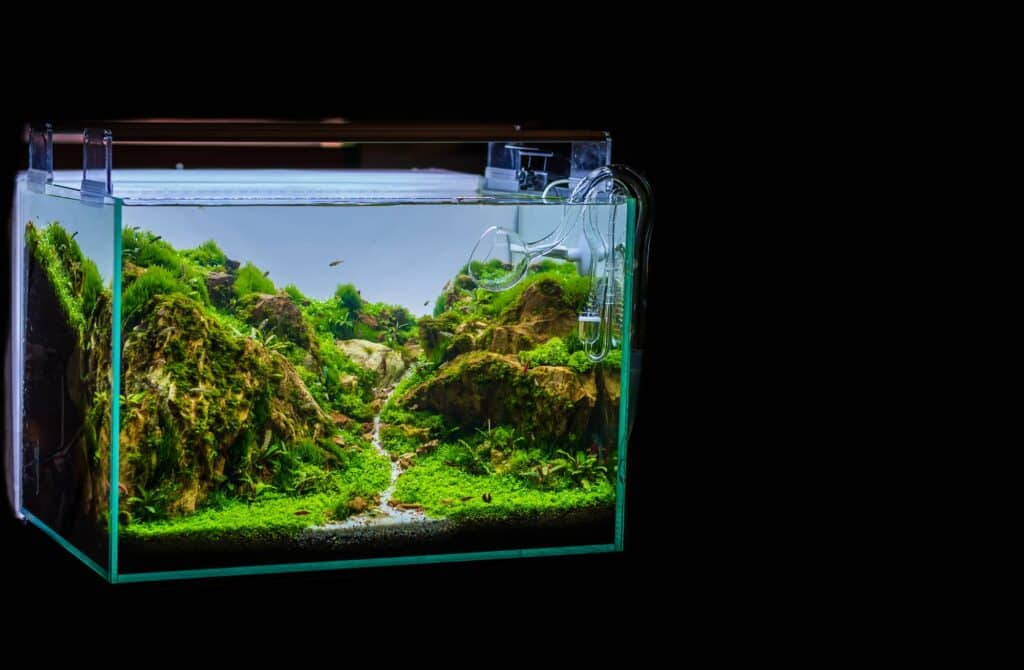 This article about Lily pipes was written by Jesse of Aquatic Mag, an aquarium website containing articles about fishkeeping as well as an online aquarium plant store!

What are Lily Pipes?

In the aquatic world, you typically have filtration. With bigger aquariums (10+ gallons), stronger filtration is necessary and many hobbyists turn to canister filters. This creates lots of tubing from the aquarium to the filter to deal with the dirty water and provide fresh clean water. While many aquarists don’t mind the tubing, it can look quite ugly, especially in an aquascape where the focus should be on the plants. This is where lily pipes come in!

Lily pipes were created to minimize the amount of equipment in an aquarium while still letting the filter do its job of sending clean water throughout the aquarium. As you can see in the top picture, the pipes are barely visible. Because they can be placed near the bottom of the aquarium, these pipes also help reduce stagnation points which can cause algae blooms.

Glassware called lily pipes? Glassware is such a board-term that hobbyists had to start using the term lily pipe to reference filtration pipes. The lily pipe was designed with the image of a lily flower in mind. Nowadays, there are multiple types of filtration pipes available in the aquarium trade, but they are all usually referenced to as lily pipes to clarify their function.

Not every aquarium is the same and there are different types of aquatic pipes that all perform in their own ways. The list below covers the most popular types of lily pipes, but there are many more available.

There are many lily pipes available, ranging from the most expensive and well known brands like ADA lily pipes, Cal Aqua fluxus/efflux pipes to DIY acrylic pipes and everything in between.

ADA lily pipes are well known and are probably the most expensive glassware in the aquatic world. With this high cost and reputation of quality comes popularity; they are definitely the most sought after glassware and hold up to their name. But do ADA, Cal Aqua fluxus, efflux and influx lily pipes perform better? Are these lily pipes thicker and stronger than the competitors? Simple answer is “no”.

As mentioned before, the quality of less expensive lily pipes is usually the same as that of more expensive brands. If you’re looking for quality glassware for an aquascape but don’t care much about big brand names, VIV Lily pipes are almost the same quality as ADA lily pipes but for half the cost. They aren’t the most well known brand but finally seem to be popping up in both the United States and Europe. VIV Lily pipes function the same as all other glassware – see the video above for a demonstration!

I can’t personally tell you which pipe or brand is the best is to use. Lily pipes come in all shapes and sizes and with different aquariums come different needs. You will need to experiment and see which one works for your aquarium!

Every type of lily pipe you may need can be found online.

If you have any more questions about lily pipes or if you want to share your experience with this lovely delicate glassware, be sure to leave a comment below. Happy fishkeeping!

8 thoughts on “All About Lily Pipes: Clean Water Filtration”