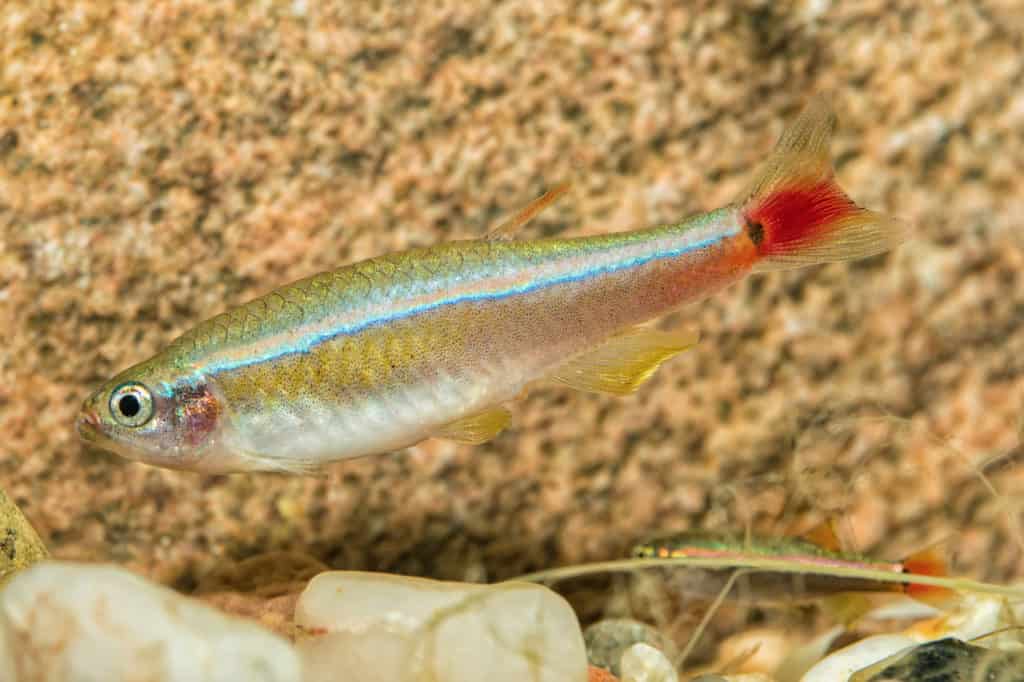 White clouds mountain minnow are a unique and hardy species of fish. Although you will usually find them next to tropical tetras, they are actually a type of peaceful minnow that is able to withstand cold water temperatures. Their docile nature and unique adaptability make them a great fish to keep in the aquarium setting.

This care sheet was written by the lovely Scalestails, Tumblr’s favorite pet expert!

The cloud mountain minnow was first discovered in 1932 and was known to inhabit the streams of Mount Baiyun, north of Guangzhou, and Guangdong Province, China. Eventually, their native waters became polluted and the wild species was considered extinct. In 2007, an additional population was found on Hainan Island, a large island south of China and east of Vietnam, far away from their original place of origin.

White cloud mountain minnows are found at high elevations in cool waters with an ideal temperature range of 64–72 °F (18–22 °C), but have been known to survive 41 °F (5 °C) water conditions. They prefer areas with plenty of plants, rocky substrates, and low to medium water flow, and can be expected to live 4-5 years.

White cloud mountain minnows have a typical torpedo-shaped body that only reaches about 1.5 inches (2.5 cm) in size when fully grown. They have a pink/white iridescent line running the length of their green/silver body that ends with a black dot at the base of the tail.

Males have a splash of red on their dorsal and caudal fins, as well as a hint of color on their mouths. Females are slightly larger, lack any red color, and have rounder torsos. Males typically have nicer colors overall and can be seen displaying and sparring with each other.

While there are only one species of Tanichthys albonubes, there is some variety in shape and color available in the aquarium hobby:

Because of the conditions found in their natural habitat, these fish give us the unique chance to recreate their environment in a small unheated tank. The most common fish species that can go in unheated tanks are goldfish. However, their large waste output and adult size make them impossible to keep in small tanks. On the other hand, the white cloud mountain minnow tank size is much smaller at only 15 gallons (57 L) and can accommodate a full school (5 fish).

If you want to mimic their wild environment, imagine this when planning your tank: a long shallow aquarium with moderate water flow, and a substrate of sand and smooth pebbles that are preferably grey-black. Large water-worn (smooth) stones can be the main decor, with possibly a few interspersed pieces of driftwood. Plants should be free to grow and able to withstand a lower temperature range. However, since they are such adaptable fish, they will also do perfectly well in a normal aquarium with stable water quality. Still, a dark substrate brings out their color and an abundance of plants will provide them with much-needed cover.

Just because these fish are used to a lower temperature doesn’t mean that your white cloud mountain minnow tank needs to be boring with just one species. These easy fish are incredibly hardy and are known to do well in just about any community tank. In the wild, they naturally live with many peaceful species like odessa barbs, rosy barbs, golden barbs, and paradise fish (Macropodus opercularis). Aggressive fish, such as cichlids and betta fish, should not be kept with white cloud mountain minnows as they will quickly become food!

White clouds may also be successfully kept with smaller invertebrates, like shrimp and snails. However, it is important to take note of which type of white cloud mountain minnow you have. If you have the longfin/meteor variety, they are more likely to have their fins nipped at by other fish. This means that you need to be more selective with what you are going to put in your tank, especially if you plan on keeping barbs that are notorious for picking at fins.

As mentioned before, these peaceful fish prefer a lower temperature range of 64–72 °F (18–22 °C) and do not require a heater. The only other widely available species of fish that prefer these conditions are goldfish. However, just because they both prefer a cold habitat does not make them compatible; goldfish are too big and too dirty for your white clouds!

That being said, your white cloud mountain minnows will do just as well in a heated aquarium than in one that is not.

These fish are micropredators in their wild habitat, often feeding on the little aquatic invertebrates that swim throughout the water column. In an established tank, they also have a wide diet and will readily accept flakes, crisps, frozen foods (bloodworms, daphnia, etc.) and freeze-dried foods. You can also consider live foods like brine shrimp, which you can breed yourself in a separate aquarium.

These fish are a very peaceful addition to the aquarium when kept correctly, making them excellent choices for keeping with other species with long fins. Again, they will not bother any bottom-feeding fish, algae eaters, small invertebrates (unless they are shrimplets), or community fish. They may be eaten or bullied by larger more aggressive fish though, so they shouldn’t be readily mixed with South American cichlids, African cichlids, or large semi-aggressive fish like Congo tetras.

They are decidedly schooling fish species with males displaying to females by opening their colorful fins. They may display to other males and occasionally “fight,” rarely resulting in injuries. Keeping them in a group of 8 or more is ideal for them to safely school. White cloud mountain minnow prefers the middle and upper parts of the aquarium, where they will actively swim and display their colors.

For such an easy fish, these minnows make a beautiful addition to any tank.

This species of fish are egg scatterers, with breeding and spawning coming easily to healthy specimens. If you are looking to breed:

In 48-60 hours, the eggs will hatch and the fry will become free-swimming. They are often too small for conventional foods so they need to be fed infusoria when first hatched. The simplest way to supply this is by adding more plants; the infusoria should show up after a few days. However, it will be important to make sure there is some in the tank so buying some beforehand is recommended.

As they get older, feed them microworms, then baby brine shrimp, then daphnia, then brine shrimp/bloodworms/etc. and eventually flakes and other frozen foods. Successful spawning will result in a new fish that could stay with you for the next few years!

This small bright fish species is perfect for indoor tanks or outdoor ponds (that are properly secured and regulated!); they can be quite an efficient mosquito control. However, special care should be taken so that they do not reenter native waterways. They are an underrated fish, with interesting behavior and attractive colors and fins.

Note from Mari: Thank you so much for this wonderful care sheet, Scalestails! I, too, would definitely recommend these lovely little fish to anyone who is interested in an unheated aquarium. Their display behavior is fascinating to watch and their natural habitat is easy to imitate, plus they are widely available in many pet stores!