What Do Tadpoles Eat? Fruits, Vegetables, And More 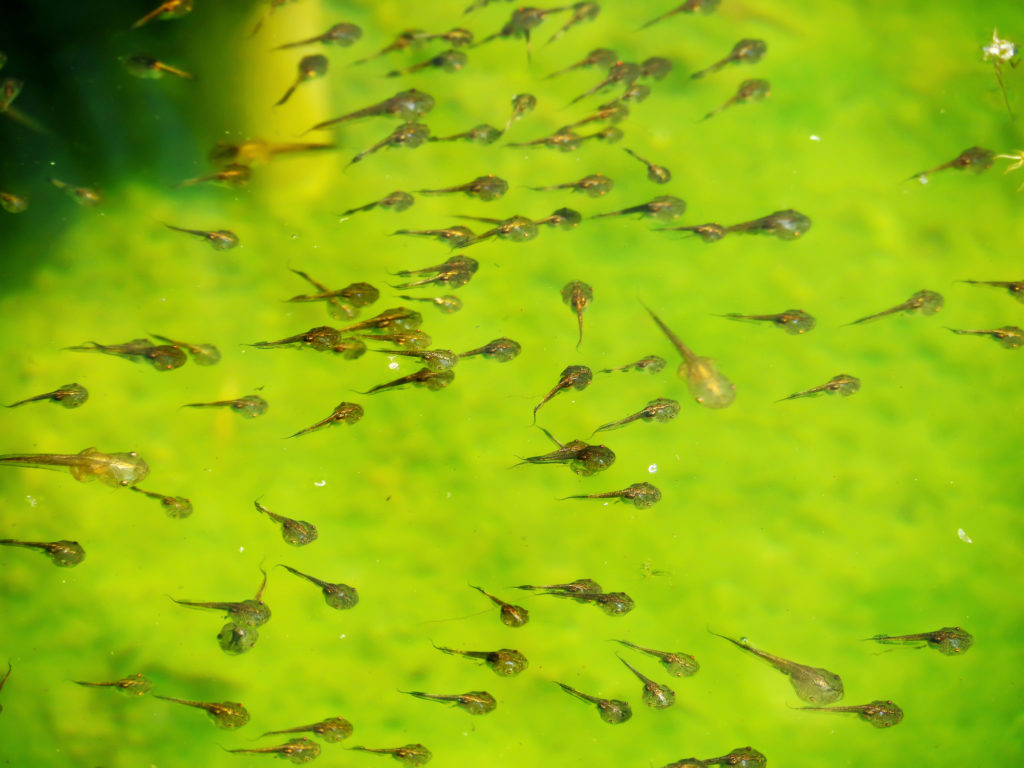 While many hobbyists keep fish for their amazing colors and interesting behaviors, too often another aquatic life is completely forgotten about and discarded as an option. However, if you already have or have hopes of setting up a pond or paludarium, then you realize just how much else there is to aquatic ecosystems. One of the keystone animals of these ecosystems is the frog.

Keep reading to find out everything you need to know about frogs and tadpoles, and to find out the answer to: what do tadpoles eat?

Frogs (and also toads) are amphibians, meaning they depend on both land and water ecosystems to survive. These animals are especially interesting as they undergo four main life cycles as they move from egg to tadpole to young frog (froglet) to mature frog.

Note: Frogs are mostly aquatic and have smooth and slimy skin. Toads are a classification of frog, and will normally stay by areas with water but spend much more time on land than frogs; toads will also have bumpier and drier skin.

In short, these life stages are:

During spawning times, adult frogs will usually pair up through loud vocalizations and croaking. If successful, the female frog will lay her eggs in dense vegetation; some species of frogs will look after their eggs while others will leave the nest entirely. Some other frogs have more unique methods of reproducing, such as the Suriname toad whose eggs actually spawn out of the female’s back.

In general, eggs are ready to hatch within 1-3 weeks.

After breaking free from the egg, the baby frog emerges as a tadpole. At the very beginning, tadpoles have a very large head with a mouth and rudimentary gills as well as a long trailing tail. For about two weeks, the tadpole is not very active and uses this time to feed off the remaining yolk.

Once the yolk reserve is depleted, the tadpoles become much more active and will begin to slowly grow hind legs. At the same time, the body will elongate and the exact species of frog becomes a little easier to identify; lungs will also begin to develop and replace the gills and will allow the tadpoles to start navigating on land. During this time, tadpole diet mainly consists of algae and other plant matter and detritus. This stage lasts about two months.

At this point, the tadpoles will resemble a full-grown frog but are not quite fully mature yet; they will have all four legs, lungs, and the remnants of their tadpole tail. The lungs will be fully developed and will have replaced the gills. About 12 weeks after hatching, the frog will have full access to terrestrial life. A froglet’s main diet will be various insects, but they will still feed on some plant matter.

Once the froglet has finally lost its tadpole tail, the frog has fully matured. This usually happens between 12-16 weeks of total development. The frog may now live freely between land and water, mainly surviving on insects, worms, and other meaty foods. When breeding season comes, the mature frog will be ready to start the cycle all over again.

Most aquarium and pet stores will sell frogs that have already successfully hatched and have entered their tadpole state; it is also easier to find tadpoles in an outdoor lake or pond than it is to find eggs! Luckily, raising tadpoles doesn’t take too much expertise. However, there are a few things that you will need to keep your tadpoles healthy and growing:

Tadpole tank setup is relatively easy. It is best to have relatively shallow water that is clear and regularly filtered and/or changed out. The water can be collected from ponds and lakes or harvested from rainwater; tap water should only be used if absolutely necessary as it contains chlorine which is highly toxic to tadpoles. If this is not possible, allow tap water to stand for at least 3 days in direct sunlight and dose water conditioner.

For a tadpole tank, you can either choose to use a gravel substrate or leave the aquarium bare-bottom. One of the benefits to using gravel is having the ability to build up one side of the substrate so that the tadpoles have a gradient to emerge from the water once they start to grow legs; however, gravel can be a little harder to clean and tends to trap a lot of detritus. A bare-bottom tank will be easier for maintenance, but you will eventually need to add rocks and other safe decorations for your tadpoles to use for the same purpose as they grow. Live plants will provide food and shelter for your tadpole for the first several weeks of its life; it will also help introduce oxygen into the water by way of photosynthesis.

While tadpoles can survive a wide range of temperatures in the wild, all the way from 40° F (4.4° C) to 90° F (32.2° C), it is best to have a constant temperature around 75° F (23.9° C) by using an aquarium heater. Remember, the growth rate of your tadpole largely depends on temperature and cooler temperatures cause slower growth. On top of a heater, an air pump/light filtration will also keep the water aerated and clean.

Though air pumps/light filtration is not entirely necessary for the success of your frogs, regular water changes would need to be scheduled as a substitute. Remember, these small frogs can’t swim that well when they’re just born, so make sure that the water current isn’t too strong for them if you choose to go with extra equipment.

What do tadpoles eat?

As they grow from tadpoles to frogs, their diet also changes; tadpoles are omnivores while frogs are carnivores, namely insectivores. It is important to understand what best to feed, when to feed, and how to feed.

Tadpoles. When tadpoles first hatch, they will survive off the remaining yolk from their eggs. After about a week or two, the tadpoles will become free-swimming and will start to munch on algae and other small organic particles that naturally occur in the tank; during this brief time, it not necessary to supplement additional food.

Once the tadpoles start growing their hind legs and their bodies elongate, they are ready to start eating blanched fruits and vegetables. Many tadpole-enthusiasts have found that their small frogs absolutely love lettuce and spinach. The fruits and vegetables should be boiled in water for 10 to 15 minutes and then removed from the pot. It should then be chopped up into very small pieces and frozen in preparation for the next feeding. If you collected your tadpoles from a local waterway, then it may be possible to gather leaves from the area and place them into the tank as well.

Note: Make sure that this waterway is pollutant-free and it is legal to collect in your area.

Remove any leftover food from the feeding as it will rot and contaminate the water. It is recommended to feed once or twice a day in small portions as long as most of the food is being eaten in one sitting. It should also be noted that tadpoles will eat various types of fish food, like flakes, pellets, and wafers. However, fish food should only be a last resort as feeding more natural options will prepare them for release and/or life in a pond.

Froglets. As the tadpoles grow into froglets, they will start needing a steady supply of insects. Pet stores and aquarium stores usually sell packaged live or dead insects, like crickets and mealworms; however, froglets are more stimulated by live food and might refuse to eat already-dead insects. Alternatively, you can also feed insects that you find around your house and/or by the area of collection; similarly, make sure that these places aren’t polluted and chemicals, like pesticides, have not recently been used.

While you will need to start offering your froglet insects, the transition does not happen overnight from omnivore to carnivore. It is best to feed insects a couple of times a week at first and then increase frequency while still offering fruits and vegetables. Fish food may still be offered throughout this period but should decrease in frequency.

Mature frog. Once your froglet has lost its tail and matured into a full-grown frog, it will become almost exclusively a carnivore. This means that their diet should mainly be made up of insects, though they may still take from vegetables from time to time. It is important to vary what you feed, making sure that one food is not being given more than another.

Yes, tadpoles eat bread crumbs, but this does not mean that they should be fed them. Bread crumbs have little nutritional value, are not naturally found in the wild, and are not compatible with their digestive tract. This is true for many other aquatic species as well, so do research before the next time you head to the pond with bread!

Yes, tadpoles eat eggs! The yolks especially are actually a good source of protein and can be offered during feeding times in very small portions.

Cucumbers require a little more preparation than other food but will be readily accepted by your tadpoles! It is important to blanch them like any other fruit or vegetable, remove the seeds, and chop them into very small pieces that are easy to eat.

So what do tadpoles eat? It depends on what stage your tadpole is at in its life cycle; is your tadpole actually still a tadpole, or has it moved onto its froglet stage? As they move from an omnivorous appetite to a carnivorous palette, it is important to know what to feed tadpoles to make sure they keep growing healthy and strong.

If you have any other questions about tadpole food, tadpole feeding, frog life cycles, or have had experience with your own tadpoles, don’t hesitate to leave a comment below!

4 thoughts on “What Do Tadpoles Eat? Fruits, Vegetables, And More”