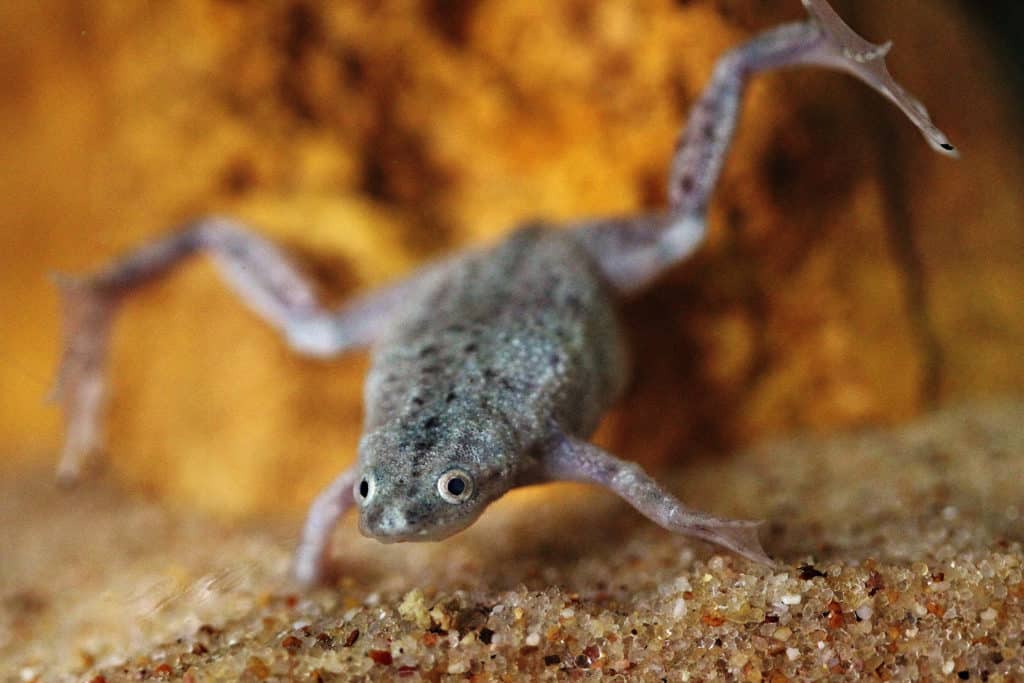 African dwarf frogs from the Hymenochirus genus are a small aquatic frog species. Their size and silly look have made them popular in the aquarium hobby, but unfortunately, there is still a lot of misinformation about their requirements.

As their common name suggests, African dwarf frogs are naturally found throughout Africa with each species thriving in a different freshwater region:

Here, their habitat depends on the season. In the wet season, you can find them in shallow rivers and ponds with calm water. During the dry season, they move to the flooded canopies of the forest. Their dark appearance allows them to camouflage from larger fish while they graze on plants and detritus above the substrate.

If this matches your frog, then you have identified the correct species for your tank! Sexing these frogs can be a little difficult, but females are generally larger and rounder than males. Males also have a small gland behind their front legs and may help your pet “sing” when it is ready to mate.

Although these amphibians don’t have many requirements when it comes to housing and care, there is a lot of misinformation out there. For example, many sites list a minimum of 5 gallons (19 L) or even make mention of a “1 gallon (3.8 L) per frog” rule. This is way too small!

African dwarf frogs are messy eaters and need quite a bit of water to swim in. 5 gallons (19 L) per frog is a good place to start, but these are social animals that should be kept in groups of at least 3; this means you’ll need an aquarium of at least around 15 gallons (57 L). Because they need to swim to the surface of the water to breathe air, a longer tank is more preferable than a taller tank.

These frogs prefer a habitat with calm water and lots of plants that offer coverage from larger fish and invertebrates. Avoid filters with very strong flow, use live plants for a natural ecosystem, and use hides such as these. Plant-wise, floating plants are especially appreciated and will be used by the frogs to hang out near the surface and easily go for gulps of air. Because medium sized gravel can accidentally be eaten and cause damage to the intestinal tract, it’s best to provide a sandy substrate.

Can you hold your African dwarf frog?

While they make for a great pet, these amphibians should not be handled. Like terrestrial frogs, aquatic frogs are skilled jumpers. They need water to survive and will quickly dry out and die without it, so be sure to always use an aquarium lid to prevent your frogs from escaping.

These frogs are often kept with Betta fish. Unfortunately, these pets are not compatible; the frogs are easily outcompeted for food and might be bothered by a nippy betta. The average betta fish tank is also not large enough to sustain a group of African dwarf frogs, so it’s just not ideal. You can find a list of better betta tankmates here.

Because African dwarf frogs are easily outcompeted and pretty vulnerable, many aquarists choose to keep them in a single-species frog aquarium without any other fish. If you do want to add other fish or inverts, go for calm species and avoid anything that can fit into your frog’s mouth. Schooling fish and bottom dwellers such as bronze Corydorasare a common pairing.

African dwarf frogs are carnivorous amphibians that should be fed a protein-based diet. (Thawed) frozen foods like mosquito larvae and worms, such as bloodworms and white worms, will provide the nutrients your pet needs! Setting up your own worm tank might be a good idea if you want to have plenty of worms on hand – it doesn’t require a lot of time and care and your other aquarium inhabitants will love regular wormy meals!

Keep in mind that these dwarf frogs are not the most skilled feeders. Just tossing food into the tank usually won’t be enough, as the frogs probably won’t notice. This can result in bad water quality and skinny frogs, so an alternative feeding method is needed. Target feeding is a good option: place the food near the frog using a turkey baster or a pair of tongs and make sure the food is eaten. Remove any uneaten food bits as soon as possible to prevent problems with water quality.

Like many other aquatic pets, African dwarf frogs will eat anything they can find and keep eating until all food is gone. Juveniles can be fed daily but adults don’t need nearly as much food and are prone to getting fat. Feed your adult frogs every other day or every two days to prevent obesity.

African dwarf frogs are appreciated by aquarium keepers for their often silly and awkward looking behavior. They spend much of their time suspended in the water, resting on plants, or occasionally darting to the surface to breathe. You may even find them at the top of your tank in an oddly-outstretched position. Don’t be alarmed! They may look like they are dead, but this is actually a completely normal behavior called “burbling.”

Since they are nocturnal animals, they stay pretty quiet during the day. But when the lights go out, they become very active. They are especially clumsy while feeding and might be spotted making strange movements during their molting process!

As long as all care requirements are met, breeding shouldn’t be too much of a challenge. While imitating the rainy season can help initiate the breeding process, this might not even be necessary. When ready to breed, female frogs will become considerably rounder and male frogs will start their singing.

The male will start the process by tightly grasping the female. The frogs will then make their way to the water surface, where the female lays her eggs and the male fertilizes them. When the egg-laying process is completed the female will turn her back and remain motionless for some time. Don’t worry, she’s fine!

Be sure to remove either the frogs or the eggs to prevent the parents and other fish from eating their own eggs or fry. Tiny tadpoles will hatch after a few days and can be fed infusoria until they are large enough to consume other foods. They can be moved back in with the parents once they have completed the transformation to small frogs.

If you have any more questions about African dwarf frog care or want to share your own experiences with this adorably awkward aquarium inhabitant, don’t hesitate to leave a comment below.