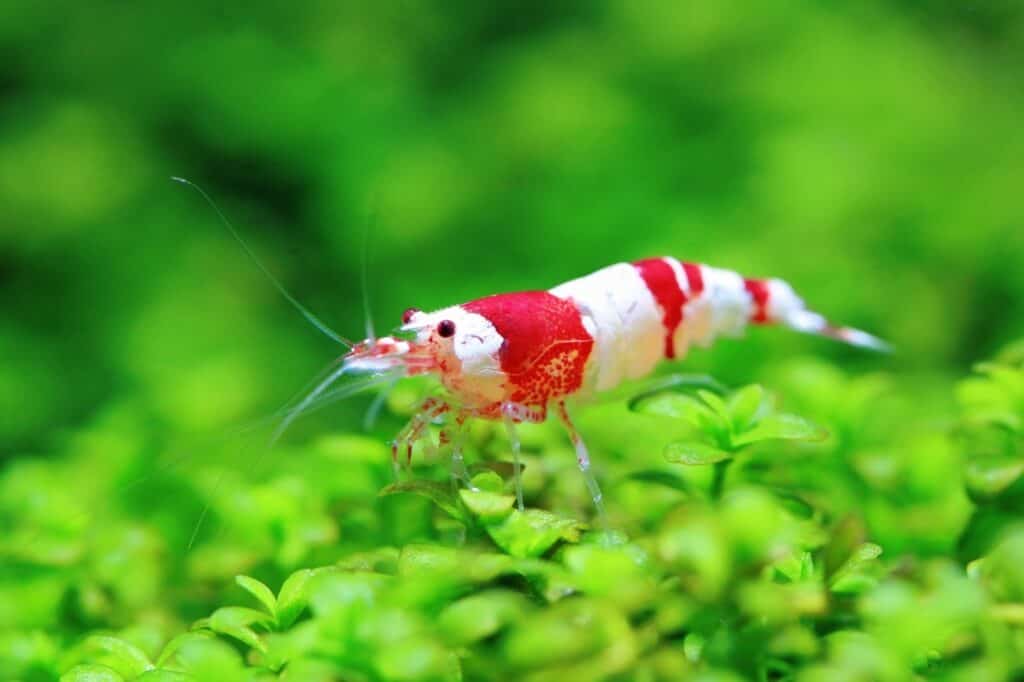 One of the most sought-after freshwater fish species is the crystal red shrimp. These small invertebrates have beautiful red and white markings that make them stand out in planted aquariums.

Their miniature size makes them a favorite for nano tanks where other larger fish might not be able to fit comfortably.

However, these shrimp can be difficult to introduce to some aquariums and need more exact water parameters than other decorative species.

Keep reading to find out everything you need to know about crystal red shrimp and getting a self-sustaining population running in your own aquarium!

Since crystal red shrimp were bred for aquarium purposes, they do not exist naturally in the wild. However, the bee shrimp is a wild shrimp and is native to China, Japan, and possibly some regions of Vietnam.

Bee shrimp live in mountain streams and rivers, and actually seem to do better in subtropical ecosystems with soft water and slightly acidic conditions; it is believed that oxygen levels influence their environment more than the actual temperature of the water.

All species in the dwarf shrimp hobby have been bred from these select populations.

Fully grown, crystal red shrimp can grow to be about 1.0-1.5 inches (2.5-3.8 cm). These shrimp are very appealing to hobbyists with their bright red and white mottled patterns.

Crystal red shrimp have been bred to express the best colors though, and are usually sold on a grading system.

Grading is largely dependent on the amount of color, the intensity of color, and the placement of color on the shrimp. Crystal red shrimp may be placed into “SSS”, “SS”, “S”, “A”, B”, or “C” grades.

The most desirable crystal red shrimp will be near opaque white with a red flower near the head of the shrimp. These variations are referred to as “SSS” grades.

On the other hand, “SS” shrimp will have more red than “SSS”; if this red is a spot on the shrimp’s back then it is also known as the “Hinomaru” pattern and is common in “SS” shrimp.

“S” shrimp are usually more red than white, but still have opacity to their colorations that make defined bands easier to see; band patterns further distinguish shrimp with designer names.

An “S” shrimp may be downgraded to an “A” shrimp because the colors lack intensity. “B” shrimp will be mostly red with unclear patterning and even less intensity. “C” shrimp were the first crystal red shrimp available and are red with loose white spotting.

It is important to remember that while genetics will determine the overall grade of the shrimp, good water parameters and a high-protein diet can still make any grade of these shrimp really pop!

Crystal red shrimp grow fast. They can reach their mature size in less than two months from when they were hatched.

However, Caridina sp. seem to reach breeding maturity slightly slower than other shrimp species. While similar species, like those from the Neocaridina genus, might be ready to breed 2-4 months after hatching, crystal red shrimp tend to take more than 5-6 months after hatching.

Of course, tank conditions will affect growth rate and breeding maturity and it is not uncommon for sibling shrimp to even grow at different rates!

The great thing about nano shrimp species is that they don’t create a lot of waste, which means that you can have larger populations in smaller aquariums without very many problems.

Of course, you will want to keep your nutrient import and export under control so that ammonia and nitrite don’t spike, but larger groups of these shrimp can be kept together in nano tanks.

The minimum tank size for these shrimp is 2.5-5.0 gallons (9.5-18.9 L). About 3 to 5 shrimp would be a good starting place for this tank size, allowing for breeding and a maintainable bioload.

The problem with crystal red shrimp is that they tend to be more sensitive to water parameters than other species.

Because these shrimp might not adapt well to sudden or even relatively gradual changes in water parameters, many hobbyists prefer keeping them in at least 10 gallons (37.9 L) for more stability and more room for live plants to maintain a balance.

These shrimp will do especially well with live plants as they love to feed on biofilm in the tank; because of this, and also because of their minute size, a sponge filter can make the perfect grazing grounds for your crystal red shrimp colony!

A soft, sandy substrate will make traversing the landscape easy for your crystal red shrimp and prevent possible injury, though they won’t have too much trouble on gravel or pellets either. It may be worthwhile to use plant-specific substrates if planning on keeping dense vegetation.

We always recommend using a heater for stability and greater control over your aquarium parameters, but crystal red shrimp don’t absolutely need a heater if you keep a close eye on the temperature.

However, many hobbyists have also had success keeping these shrimp without a heater and with a fluctuating room temperature. For the most part, these shrimp will remain active above 60° F (15.6° C). Below that, they may start to become lethargic and stop reproducing.

While an unheated tank setup may work for some shrimp keepers, it’s still recommended to use a heater to prevent any sudden dips in temperature; an unheated tank also tends to work better with larger tanks that retain heat better due to water volume.

Are crystal red shrimp suitable for your aquarium?

As mentioned before, crystal red shrimp are some of the more difficult–and definitely more expensive–kinds of ornate freshwater shrimp that you can get for your aquarium.

Ideal crystal red shrimp care will include a heavily planted tank with good biological filtration and natural biofilm. There should be no predators that could injure or eat the shrimp, and the water flow should be minimal to prevent injury as well.

Water parameters should always be kept in check for possible ammonia, nitrite, and copper especially. This may require getting filtered water and remineralizing it later on.

Many hobbyists like to keep shrimp-only tanks, allowing these little creatures to create a natural ecosystem in their aquarium.

Crystal red shrimp colonies can easily be kept with some fish species as long as they’re community-safe. These small shrimp can easily become quick snacks by fish even if that species isn’t known to go after invertebrates; it is better to choose fish species that have small mouths, like guppies and smaller tetras, that couldn’t eat the shrimp even if they wanted to!

Can you mix different types of shrimp?

While shrimp are some of the most peaceful and community-friendly invertebrates, different species can’t be so easily mixed together. This is mainly due to the possibility of hybridization.

Hybrid species, like flowerhorns, are the result of when two closely-related species, that are usually within the same scientific genus, breed.

This often leaves the offspring sterile and can cause both desirable and undesirable mutations; because of the chance that these mutations affect the quality of life of the offspring, hybridization is not recommended.

This means that other species within the Caridina genus should not be placed with crystal red shrimp (Caridina cantonensis var. ‘Crystal Red’). These hybrids often result in paler colors and more tones of greys and browns.

While it hasn’t been proven, hobbyists also believe that Caridina sp. can hybridize with Neocardina sp., like cherry shrimp; breeders will often put these two genera together for selective breeding, though it’s not encouraged in the home aquarium.

Otherwise, crystal red shrimp can generally be kept with other shrimp species as long as they’re from a different genus. Make sure to understand the different water parameters needed for each species, as sometimes these ranges have little overlap.

How many shrimp can be kept per gallon?

Crystal red shimp are very small and can be kept in large numbers. In total, 2-5 shrimp per gallon is a good starting point.

As mentioned before, it’s usually best to start with a smaller population and allow for natural breeding to happen on its own. The population size will depend on the space and food available in the tank.

Crystal red shrimp are prey animals and can be shy at first. They like to forage for food on every surface of the aquarium, but will especially like foreground plants and sponge filters if you have one.

About every month or so, your crystal red shrimp will shed its exoskeleton in order to grow.

This molted exoskeleton can very easily be mistaken for a dead shrimp, but if everything else in the tank is acting normal, then there’s usually no reason to worry. The molt should be left in the aquarium as the shrimp will eat it to regain some nutrients.

It is normal for the shrimp to disappear from the viewing areas of the tank during this time as it is at its most vulnerable. You might even notice some strange behavior in the shrimp before and after the shed, like long periods of motionless or erratic movement.

For the most part, there’s no reason to worry if your shrimp acts odd one day as long as everything else in the tank looks normal.

If one day, all your shrimp start to jet around the tank, then there might be something wrong and parameters should be tested immediately.

Crystal red shrimp are largely scavengers and will constantly survey the tank for available food. Most often, they will plop themselves down on a leaf and graze on whatever is there or floats along.

Even with mature tanks, it’s always a good idea to supplement feedings regularly. Crystal red shrimp will appreciate most foods, and can be live, frozen, or freeze-dried foods like bloodworms, insect larvae, and algae wafers; blanched vegetables will also be appreciated from time to time.

Shrimp-specific pellets are recommended to increase calcium consumption as it helps with molting.

Many hobbyists want to try their hand at breeding shrimp. As mentioned before, all of the Caridina cantonensis variations available today are the offspring of those few bee shrimp populations in the wild.

Crystal red shrimp might be difficult to set up a tank for, but once you have a stable population, they’re relatively easy and straightforward to breed!

The easiest way to make sure that your baby shrimp survive is by eliminating any potential threats. Shrimp are nearly microscopic when born and are a favorite snack for most fish and invertebrates.

Don’t forget that an overly powerful filter or powerhead will also hurt juvenile and adult shrimp!

Otherwise, keep conditions stable and make sure that you have both males and females present in the tank. Females release pheromones into the water when they are ready to mate, and before long, you will have a female shrimp with eggs ready to hatch in about a month.

These baby shrimp do best with powder shrimp supplements at first, but will eventually move onto plant detritus and other microscopic findings around the tank. It will take a few weeks before their true colors form.

Breeding lower grades of crystal red shrimp can result in higher grades, making this a lucrative practice if desired.

Not only are crystal red shrimp beautiful in a planted tank, but the breeding that goes into creating high-grade variations is also fascinating. These shrimp can definitely be the highlight of any tank as long as their exact conditions are met.

Because of their higher demands, they are not considered beginner shrimp. But as long as water conditions are ideal and other species from the genus are not introduced into the same tank, then you will have a thriving colony before long!

If you have any questions about crystal red shrimp, other species of dwarf shrimp, or have had experience breeding these beautiful invertebrates, don’t hesitate to leave a comment below!