What Do Shrimp Eat? Plants and Proteins They Need In Their Diet 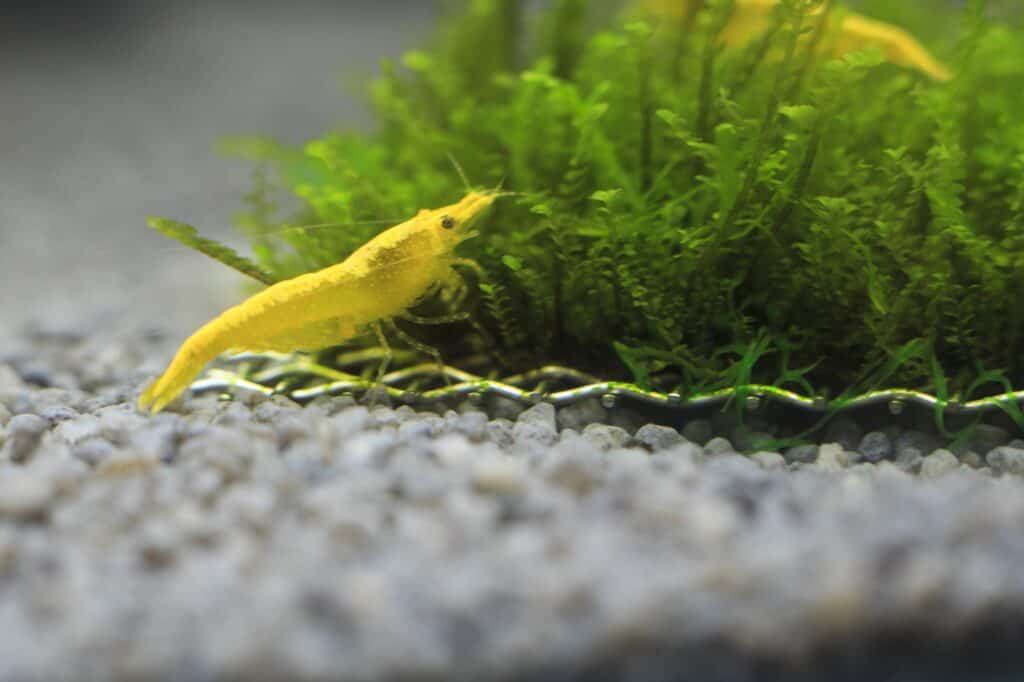 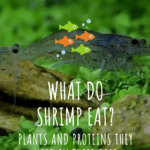 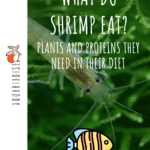 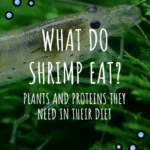 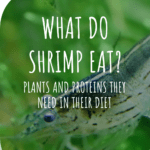 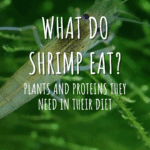 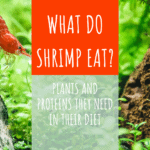 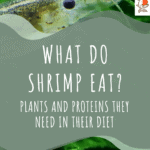 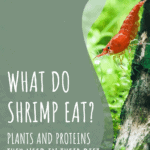 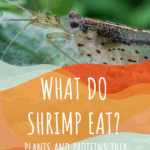 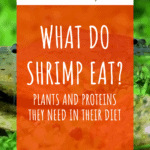 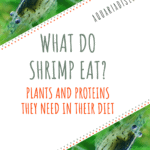 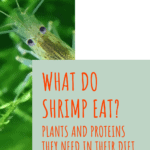 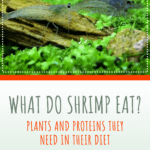 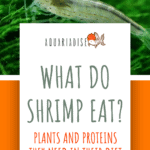 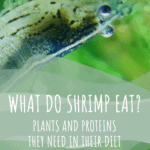 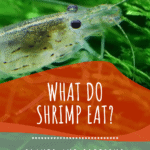 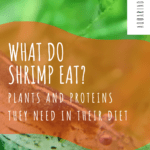 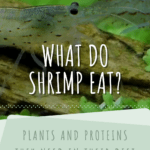 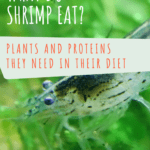 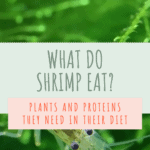 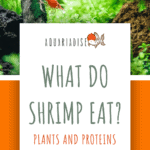 Marine and freshwater shrimp are becoming an extremely popular addition to many home aquariums. These peaceful little creatures are not only fascinating to watch as they scurry around the tank in their endless search for food, but they also make a great clean-up crew, helping to keep your tank tidy.

So, shrimp are well-known for eating certain algae species, leftover fish food, and general detritus, but do you need to feed your shrimp anything else to keep them healthy?

Read this comprehensive guide to find out!

What do shrimp eat?

All species of shrimp eat a wide variety of things, depending on where they live and what’s available to them in their environment, and their stage of growth. To keep your shrimp healthy and thriving, you need to feed them a similar diet to their natural one.

Shrimp are mainly scavengers, grazing on whatever organic food they can find that is small enough for them to eat. Essentially, tank-bred shrimp and their wild relatives both eat the same diet and have the same nutritional requirements.

If you have a saltwater marine or reef tank, you may like to add a few shrimp varieties. Marine shrimp come in many colors and patterns, making a beautiful addition to your community, as well as being industrious cleaners and working for you, too.

In nature, shrimp spawn a few miles offshore. The fertilized eggs sink to the bottom of the ocean, hatching into tiny larvae that float and drift with the current on the water surface. Several larval stages occur over a few weeks, after which the shrimp emerge as tiny adults.

The juvenile shrimp make their way back to the ocean floor or tidal estuaries, where they become scavengers, crawling along on the substrate and eating whatever organic matter they can find, including algae and plankton.

Adult marine shrimp scavenge on whatever they can find in their environment. Ocean shrimp feed on dead fish, worms, plant matter, clams, crabs, snails, and any other decomposing organic matter they come across while patrolling the substrate. Shrimp are also cannibals, preying on any smaller, weaker shrimp that happens across their path.

You may observe your shrimp scuffing up the substrate as if burrowing. In fact, the shrimp are hunting for prey, eating whatever tiny creatures they stir up and detecting likely items of food by “smelling” it, using the tiny feelers on their heads.

What to feed marine shrimp

So, marine shrimp are omnivorous creatures that need a plant-based diet containing plenty of meaty protein.

Like their ocean-dwelling relatives, species of freshwater shrimp are scavengers, searching the substrate for bacteria, algae, decaying plant matter, and other microorganisms that they spend much of their time grazing on. Freshwater shrimp will also eat dead fish and other deceased creatures, including shrimp.

So, basically, all aquarium shrimp need a plant-based diet with some animal protein included to provide them with a properly balanced diet.

All shrimp shed their outer carapace periodically, going into hiding for a few days as their new shell hardens. Don’t throw away the discarded shell! The shell is packed with calcium, and the shrimp will eat it to replenish their supply of the mineral, helping to keep their outer carapace strong and healthy.

What to feed your freshwater shrimp

Here’s an overview of what you should feed your shrimp to keep them healthy and thriving.

The majority of your shrimps’ diet should consist of algae. So, you should only add shrimp to a mature tank that contains plenty of green algae for the shrimp to graze on. The shrimp will happily nibble away at the algae pretty much 24/7, which is why these busy little invertebrates are so popular as pets in a community fish tank.

If there are lots of algae in the tank and you can see the shrimp eating it, you most likely don’t need to worry too much about giving them anything else. However, if the algae are all gone, you will need to supplement the shrimps’ diet. Likewise, if you notice that your shrimp are not eating the algae, it’s likely that you’re giving them too many, more appetizing alternatives!

In that case, all you need to do is stop feeding the shrimp for a day or two, and they should go back to eating algae.

If algae levels are becoming depleted, you can give your shrimp some veggies to supplement their diet. Try offering kale, sweet potato, spinach, zucchini, broccoli, and carrot.

You’ll need to peel the veggies, slice them thinly, and blanch them in boiling water for a couple of minutes. Remove the veggies from the water and place in a dish over a bowl of ice to stop the cooking process. That cooking method helps to break down the fibrous veggies so that they’re soft enough for the shrimp to eat and prevents the veg from floating out of the shrimps’ reach.

You can leave a piece of veg in the tank overnight and remove what’s left of it in the morning.

Freshwater shrimp live in an environment where the substrate is often covered with a layer of fallen leaves. Those leaves harbor colonies of infusoria, microorganisms, and harmless bacteria that gradually break down the leaves. Shrimp thrive on the decomposing matter and the organisms that live on it, so adding a layer of dried leaves to your tank is great for the shrimp. SunGrow Indian Almond Leaves, Water Conditioner for Betta & Gouramis Check Price on Amazon
We earn a commission if you make a purchase, at no additional cost to you.

Rather than collecting leaves from your garden or local park that could be contaminated with pesticide or carry pests that you don’t want in your fish tank, buy almond leaves (Catappa leaves) from your local fish store or online. These leaves are perfect for use in the aquarium because large leaves provide a big surface area for the shrimp to graze on. The leaves also leach flavonoids and tannins that have excellent anti-inflammatory and antimicrobial properties, promoting a healthy environment for your fish.

Although commercial shrimp foods are convenient and easy to use, be careful that you buy high-quality food that contains a healthy balance of nutrition.

Some cheaper brands of food are made of mostly animal protein, rather than algae or spirulina. So, look out for plant-based shrimp foods and add some fresh meaty protein to the shrimps’ diet a couple of times each week.

When it comes to feeding your shrimp, the key to getting it right is to provide your pets with a varied diet that consists mainly of plant-based foods, supplemented with meaty proteins. Essentially, you want to replicate what the shrimp would eat in their natural environment, which is pretty much whatever they can find that’s small enough to fit into their mouths!

Your aquarium should be mature enough to contain a good supply of algae and biofilm that will provide the shrimp with the basis of their diet. Add a layer of leaf litter to provide plenty of surfaces on which bacteria, microbes, and infusoria can develop and colonize, which adds another layer to the shrimps’ buffet. Add a few blanched, fresh vegetables each week, and the shrimp will have all the plant material that they need to fulfill their nutritional requirements.

Supplement the shrimps’ diet with meaty proteins, including thawed frozen foods. You can also include commercial shrimp food, but do make sure that it’s high-quality and contains plenty of algae or some other form of plant material.

Finally, remember to leave your shrimps’ shells in the tank after they’ve been shed. The shrimp needs the calcium that the shell contains to promote a strong and healthy new carapace.