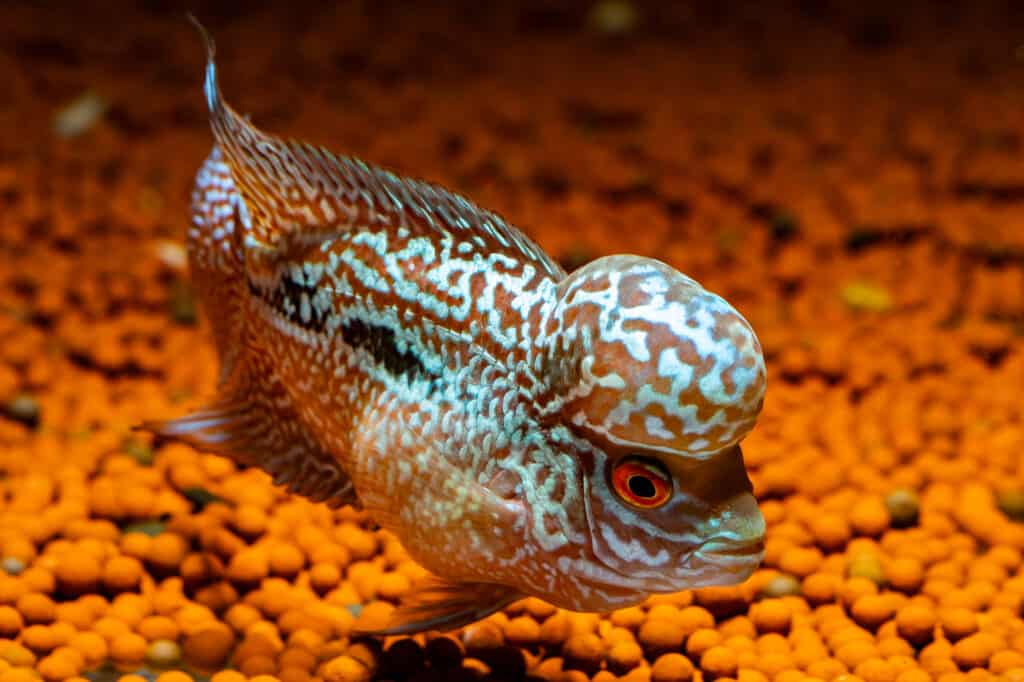 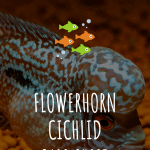 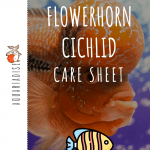 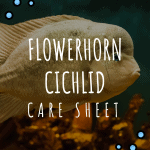 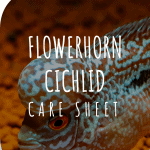 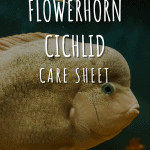 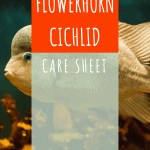 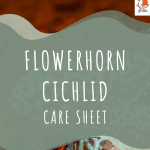 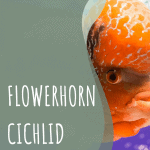 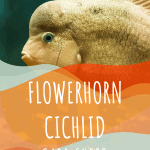 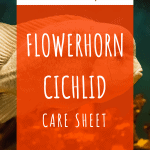 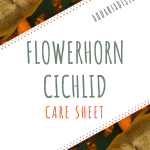 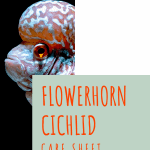 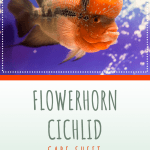 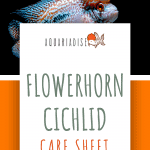 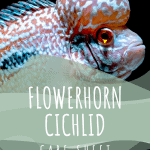 The Flowerhorn cichlid is a remarkable fish that has looks and personality to burn! These stunning fish can make an eye-catching addition to the aquarium, but would one of these amazing creatures be the right choice of pet for you?

In this guide, we take a closer look at the Flowerhorn cichlid to find out more about their origins and learn how to care for them.

Flowerhorns do not exist in the wild environment. These are essentially hybrids that resulted from extensive cichlid interbreeding. Cichlids are generally not fussy when it comes to mating, and they will spawn with pretty much any other fish of the opposite sex, as long as it is either the same species or another variety of cichlid. That promiscuous nature has created a wide variety of often bizarre and weird results!

A unique feature of the Flowerhorn Cichlid is that its coloring and pattern evolve and change throughout its juvenile years, only becoming permanent when the fish reaches adulthood. So, if you want a particular look to your fish, you need to know that you are taking potluck when you buy an immature specimen. However, many Flowerhorn owners love to watch their pet’s journey as it grows and changes. Also, juvenile Flowerhorns tend to be much less expensive than adults.

Unlike the popular Blood Parrot hybrid cichlid, the Flowerhorn was created artificially, so you won’t find them living in the wild. Malaysian fishkeeping enthusiasts carefully developed the Flowerhorn in the mid-1900s through crossbreeding many varieties of South American cichlids. The fish are said to have been admired by the breeders for the large nuchal humps on the creatures’ heads that resemble “Karoi,” the warships found in the west of the country.

It’s thought that the Flowerhorn was created by interbreeding various species, including:

Nowadays, the bloodlines of those perfect specimens are kept pure. That not only preserves the look of the fish but also helps to keep the animal healthy and free from many of the ailments that often afflict many of the other hybrid cichlid species. Flowerhorns are also fertile, which is very uncommon among hybrid fish.

First-generation Flowerhorns that you find for sale in fish stores today are called the Hua Luo Han Cichlids and were produced around 1998 by crossbreeding the hybrid Jingang Blood Parrot with the original Blood Parrot. At first, you could only find two kinds of Flowerhorns in the U.S.; the golden-based and regular varieties.

Within those species, there were further variations. However, by 1999, the Flowerhorn had developed into four distinct strains:

Further crossbreeding in 2000 and 2001 produced the Kamfa strains, which were a crossbreed of any of those four species and certain Blood Parrot cichlids. Those experimental hybrids created fish with larger nuchal humps, sunken eyes, wraparound tails, short mouths, and ever brighter coloration.

Thanks to their air of mystique and outrageous looks, the Flowerhorn fish is regarded with something akin to celebrity status in Asia’s tropical fish keeping community. The species are said to bring good fortune to their owners, as well as good Feng Shui, affecting relationships, influencing wealth, and even having a bearing on the health of the keeper.

Because of the Flowerhorn fish’s almost supernatural reputation, specimens with unique patterns and colors, such as pink hearts or Chinese lettering, can sell for many thousands of dollars. Fish with especially large nuchal humps can bring good luck to their owner. The humps grow with the fish, giving the fish a resemblance to the Chinese God of Longevity. So, the bigger the hump, the luckier the fish, and the higher its value.

Unfortunately, the Flowerhorn cichlid is not suitable for life in a community tank, unless you have an aquarium of more than 200 gallons.

These fish are extremely aggressive and highly territorial, and they will readily attack any other fishes in their tank. In fact, Flowerhorns have been known to attack their human owners during routine tank cleaning, leaving minor lacerations on the unfortunate fishkeeper’s skin.

Flowerhorn cichlids are unmistakable in appearance. The fish has a thick, oval-shaped body with a large nuchal hump on the head.

These are very big fish, growing to between 12 and 16 inches in length. The scales can be greenish-blue and metallic to red and pink at the front of the body. Most strains have black horizontal striping.

The Flowerhorn cichlid generally lives for between eight and ten years if kept in appropriate conditions and fed a nutritious, balanced diet.

There are seven distinct points to look for when choosing a Flowerhorn, including:

Take a look at the Flowerhorn’s head, and you will notice that the fish has one nostril on either side. The fish sucks in and expels water, sampling it for scents.

Despite their size and exotic appearance, Flowerhorn cichlids are actually pretty straightforward to care for and would make a good pet for a relative novice to the hobby, as long as a large aquarium is provided.

Flowerhorn cichlids are large fishes that require plenty of space, so you will need to provide a tank of at least 55 gallons, ideally at least four feet long by two feet wide. If you decide to keep a breeding pair of these fishes, a tank of at least 125 gallons is required, and if you decide to keep your specimen with other large tankmates, a 200-gallon aquarium is a very minimum that you can get away with.

The Flowerhorn cichlid tends to be quite destructive, digging in the substrate and uprooting live plants, which they will also eat.

A gravel substrate is perfect, and your fish will appreciate a few rocks, too, that must be well-anchored so that they don’t get knocked over. However, these fish tend to spend much of their time cruising around the tank in the open water, so do leave plenty of space for that.

Normal to moderate lighting levels are fine for these fish.

These large, freshwater fish need an efficient filtration system, and moderate water flow throughout the tank.

The Flowerhorn cichlid appreciates water temperatures of between 80° to 89.0° Fahrenheit. The pH range should be between 6.5 and 7.8, with the water hardness in the range 9 to 20 dGH.

The Flowerhorn cichlid is a carnivore that has a considerable appetite, and it’s very easy to underfeed these fish.

These fish will eat pretty much any kind of live, frozen, or fresh meaty foods. It’s important to provide variety too, including cichlid pellets, bloodworms, krill, crickets, nightcrawlers, earthworms, and supplements enriched with carotene to boost the fish’s colors.

Do not feed Flowerhorns with any form of mammal meat, such as beef heart, which can cause digestive problems.

Feed your Flowerhorn two or three times per day.

The Flowerhorn cichlid is not a community fish, as it can be highly territorial and aggressive. So, you really need to keep these fishes alone or in a breeding pair in a very large tank. If you do want to try keeping the Flowerhorn in the company, choose other large and aggressive cichlid species and be sure to invest in a very large aquarium with plenty of decoration that creates natural territories.

If you do decide to breed the Flowerhorn, you must know that the species can also be aggressive toward each other, so you’ll need to watch your fish closely to make sure that they do not start fighting, potentially until one dies.

You cannot keep invertebrates in the same tank as the Flowerhorn cichlid, as they will be regarded as a potential food source.

If you want to try breeding your Flowerhorn cichlids, you first need to know how to determine the gender of your fish.

Determining the gender of Flowerhorns is not straightforward, although there are a few methods that can be used.

Breeding these fish is not easy, largely because of their aggressive nature, but it can be achieved.

When setting up the spawning tank, make sure that you include plenty of hiding places for the female so that she can get out of the male’s way and line of sight when necessary. You should also place a divider in the bottom of the tank with the bottom elevated, allowing the fish to interact without making physical contact that could prove dangerous. If you take that approach, place a flat stone adjacent to the divider and leave the rest of the tank devoid of spawning locations. That forces the female to deposit her eggs in a spot where the male is able to fertilize them.

By directing the water flow from the male’s side of the divider to the female’s side, you’ll assist the fertilizing process.

The water in the spawning tank should be around 82° Fahrenheit with a pH of neutral or 7.0.

Condition the fish for spawning by feeding them a high-quality diet several times daily, and carry out frequent water changes so that the increased bioload doesn’t pollute the water.

Once the eggs are laid and fertilized, the parents will guard them ferociously. Watch closely to make sure that the male doesn’t attack the female, and remove her if necessary.

Once the eggs hatch and the fry appear, they can be fed baby brine shrimp at first and then crushed cichlid pellets or flake foods after the first couple of weeks.

Flowerhord cichlids are pretty hardy, although they can be prone to a few common freshwater fish ailments, especially if the water condition and oxygenation are poor.

Ich is a very common ailment that affects both coldwater and tropical aquarium fish. Ich is caused by the Ichthyophthirius multifiliis protozoan parasite. The parasite lives in the water, attacking fish that are stressed or weakened by poor tank conditions.

You’ll notice the fish rubbing against the substrate and tank decorations in response to the skin irritation that the parasites cause. After a few days, a rash of tiny white spots appears on the fish’s skin, gills, and fins, hence the other common name for the disease; white spot.

Elevate the tank temperature to 86° Fahrenheit for three days, and treat the water with an over-the-counter medication as per the manufacturer’s instructions.

Cichlids are prone to Hole-In-Head disease, or Hexamita.

Hexamitiasis is caused by a parasite. Lesions appear on the fish’s head and flanks, hence the condition’s common name. As with most parasitic diseases, the condition can be treated with a proprietary medication that you’ll get from your local fish store.

Prevention is better than cure with all fish diseases. Keep the tank clean, and the filter system properly maintained, feed your fish a correct, high-quality diet, and all should be well.

If you put new plants or decorations into the tank, always wash them first to remove parasites, and quarantine new fish for at least two weeks before adding them to your display tank.

Flowerhorn cichlids are available from a specialist fish store, and you can usually find them if you search online. These are typically not cheap fish, and you can expect to pay from $100 for a well-marked, mature specimen. Generally, the older the fish, the larger the nuchal hump, and the more extravagantly marked, the more expensive it will be.

Flowerhorn cichlids are a fascinating and unusual fish species that you might like to consider if you have a very large tank, and you’re happy to keep just one of these creatures in isolation.

Flowerhorns are pretty easy to care for, provided that you give them their preferred water conditions and a high-quality, nutritious diet. So, if you have a very large tank, one of these beautiful, eye-catching cichlids might be a great pet for you.