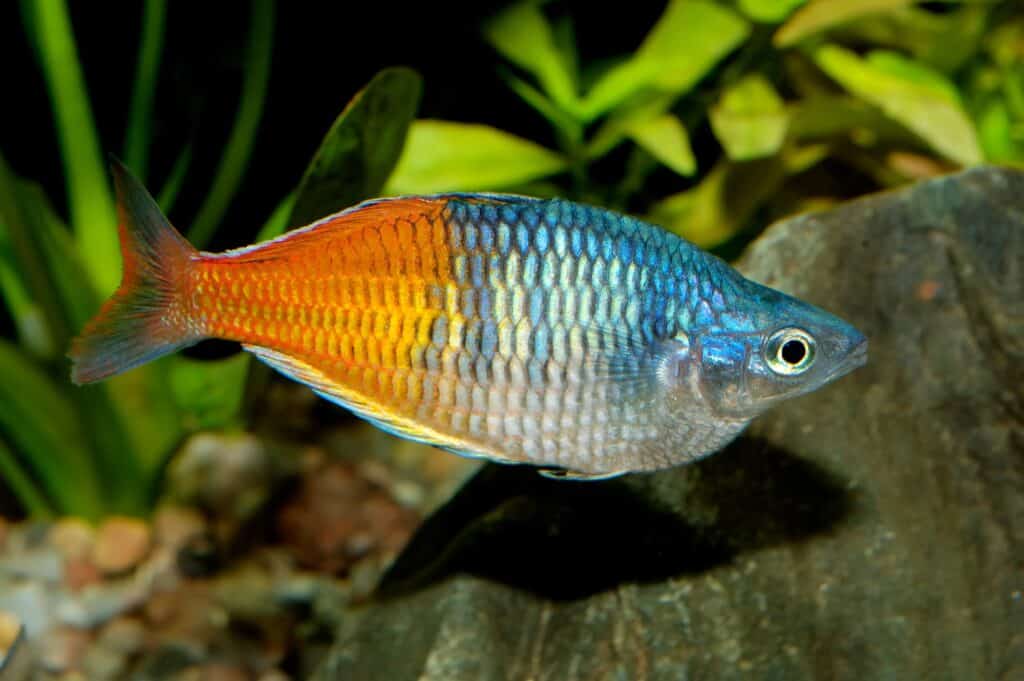 Probably one of the most beautiful and most popular species of freshwater fish is the Boesemani rainbowfish. These fish are easily recognized by the male’s signature gradient of blue and orange. They are active schooling fish that would make a great addition to planted tanks with lots of open water to swim.

Keep reading to find out everything you need to know about Boesemani rainbowfish and how to keep a school of these colorful fish in your own freshwater aquarium!

Melanotaenia boesemani is commonly known as Boeseman’s rainbowfish or as Boesemani rainbowfish. These fish belong to the Melanotaeniidae family which houses some of the most colorful tropical fish in the freshwater aquarium hobby.

With over 80 species belonging to the same genus as Boesemani rainbowfish, there are many different shapes and sizes of rainbowfish available. However, while these fish come in many colors, they do not change colors throughout their adult lives and only feature a few colors independently.

The Boesemani rainbowfish comes from the warm waters of Indonesia. Their natural range is very limited and they’re only thought to occur in the regions surrounding the Ajamaru lake system in the western areas of Bird’s Head Peninsula in West Papua, Indonesia.

There, these fish school together in the shallower parts of the lake ecosystems and hide among dense vegetation. These lakes often have very hard and alkaline water, meaning that the total mineral content is high and pH is usually upwards of neutral. While these fish are used to these parameters in this specific area of Indonesia, they have also been found in waters with much different water parameters.

In general, rainbowfish species are pretty easy to tell apart from other community fish. They typically have wide bodies with a downward sloping face. Boesemani rainbowfish are usually easy to identify due to their signature blue and orange colors.

On the other hand, female Boesemani rainbows are much less ornate, but beautiful nevertheless. Females are much less vibrant and don’t have such a deep body. Instead, they usually have a greenish-brown dorsal area that fades to white/silver on their underbellies. Like males, females may also have two to three noticeable dark black or grey stripes behind the gills.

How big do Boesemani rainbows get?

The Boesemani rainbow has a much deeper body than it is long, and only grows to about 4.0 inches (10.2 cm) when fully grown; female Boesemani usually grow slightly smaller, between 3.0-3.5 inches (7.6-8.9 cm). As many Boesemani rainbowfish are sold as juveniles that are uniform in appearance, it can be difficult to know how many males and females you are getting.

While relatively small, keep in mind that these fish need to be kept in schools which can quickly fill up space in a tank.

As Boesemani rainbow can be relatively expensive for a tropical schooling fish, it’s reassuring to know that they can live for upwards of 5 years with exceptional care.

The best Boesemani rainbow tank setup will be one that accentuates the natural colors and behaviors of the fish. Some hobbyists believe that 30 gallons (113.6 L) is enough room to keep a healthy school of rainbowfish, but 40 gallons (151.4 L) will give your fish plenty of space to swim while allowing for dense vegetation and aquascaping.

Rainbowfish can be slightly more demanding than other tropical fish due to the natural hardness and alkaline pH of their natural ecosystems. While most rainbowfish have acclimated to the more typical water parameters of freshwater home systems, it’s always best to ask the preferred water conditions for these particular fish.

Otherwise, these fish will appreciate a background of vegetation and medium water flow. In order to help accentuate their colors even more, many hobbyists choose to keep them on darker substrates.

Generally, Boesemani rainbow fish are hardy. However, their more exact water hardness, pH, and water temperature requirements can make them a slightly more challenging species to keep, and parameters need to be maintained. They will not do well in softer, more acidic water.

Also, keep in mind that these fish cannot be kept alone and need to be kept in a school; otherwise, they can quickly stress out and catch a disease and/or die.

Rainbowfish are generally peaceful fish that do well in community aquarium setups with other fish that are similar in shape, size, and behavior. These fish come from a very specific ecosystem in Indonesia and the species that they’re usually found with are few and far between in the hobby.

If you’re going for a tank full of life, then you will want to go with schooling species. This includes other rainbowfish (praecox/dwarf rainbowfish, turquoise rainbowfish), Corydoras, danios (zebra danio, longfin zebra danios), loaches, Otocinclus, and larger tetras, like congo tetras; celestial pearl danios may be added but can get stressed from overactivity. Most of these fish require large schools and are active throughout the day, so keep that in mind when stocking!

On the other hand, you can keep Boesemani rainbowfish with more semi-aggressive species that might not do the best with smaller community fish. Some of these options include the rainbow cichlid, keyhole cichlid, and the blue acara cichlid, especially since most cichlids prefer more alkaline water; keep in mind that while these fish can be kept with Boesemani rainbowfish, they cannot necessarily be kept with each other.

Can you keep Boesemani rainbowfish together?

Yes! It is actually a requirement to have a school of Boesemani rainbowfish in your aquarium in order to make them feel safe. In general, it’s always best to have more females than males to prevent males from trying to get too much attention from females, leaving both fish to become stressed out.

If you have an especially active rainbowfish, it might help to add more rainbows as they tend to calm down with bigger numbers.

Boesemani rainbowfish are active fish that need a lot of open space for swimming. Their large bodies and sudden movements can easily stress out smaller, less active fish. They also tend to be pretty skittish and may immediately react to movements outside of the tank.

It should also be noted that these fish display their best colors over time given the right tank setup, diet, and ecosystem. However, because of dwindling numbers in the wild, these fish have been mass-bred in the aquarium hobby. Consequently, this has led to a decreased quality of genes which has led to some weird behaviors and less vibrant colors.

These fish are largely omnivorous and appreciate a mixed diet of plant- and animal-based foods. While these fish might look like they have large mouths, they cannot accept larger foods as their throat becomes more narrow.

Instead, you can offer an assortment of appropriately-sized live, frozen, and freeze-dried foods. They especially love insect larvae and worms, like bloodworms and Tubifex worms. A good high-quality fish flake or pellet should be the main staple of the diet in order to give your fish the nutrients it needs to keep colors bright.

While these fish are omnivores, they will not pick at any healthy, live plants in your aquarium. However, they will pick up any loose detritus or dying leaves. They will also appreciate blanched vegetables, like zucchini and spinach, as well as algae wafers or pellets from time to time.

Because of diminishing populations in the wild and the simple beauty of these fish, the Boesemani rainbowfish is a popular and easy fish to breed in the home aquarium. While easy to breed, it is more tricky to raise the fry than it is to breed a pair.

Boesemani rainbowfish are egg scatterers, which means that the female will lay eggs and the male will fertilize them. You will know that your female rainbow is ready to spawn when her abdomen is noticeably plumper; males will also intensify in color and might develop a stripe on their heads as well as start displaying between each other. Once conditions are right, the female will spawn over vegetation, most preferably, moss.

Spawning can continue over the course of a few weeks for each female. After another week or two, the fry will hatch and begin eating. Interestingly, adult Boesemani rainbowfish rarely eat their young, but if you want more control and success over your fry, then it’s best to complete the breeding process in a separate tank.

The fry will tend to stay towards the surface of the water and in vegetation. They can initially take infusoria and gradually be moved onto bigger foods, like brine shrimp.

The Boesemani rainbowfish is one of the most beautiful fish currently available in the aquarium hobby. While they might need some extra care in regards to more hard and alkaline water conditions as well as more active tank mates, their care is relatively easy and highly rewarding. As long as you keep your Boesemani rainbowfish happy and healthy with a well-varied died, your fish will display its best colors possible in return!

If you have any questions about Boesemani rainbowfish, other species of rainbowfish, or have had experience with these colorful freshwater fish in your own aquarium, don’t hesitate to leave a comment below!