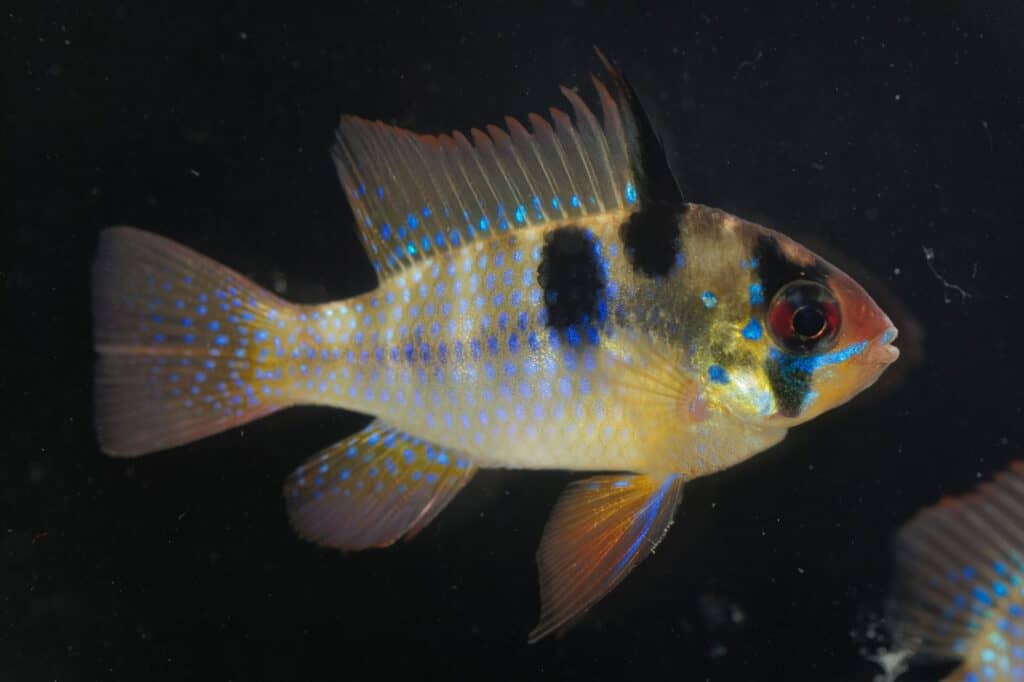 German blue rams are some of the most popular species of South American cichlid currently available in the tropical fish hobby. But did you know that they come in a bunch of other colors too?

One of these variations is known as the gold ram after its yellow tones and hints of typical German blue ram markings. Despite their beauty, these fish aren’t for beginners. As we’ll discuss, they’re very sensitive to water parameters and improper breeding has left some variations to be more susceptible to disease and infection. However, if you’re able to find a reputable breeder and set up the tank properly, then the beautiful gold ram cichlid might be the fish for you.

Keep reading to find out everything you need to know about caring for and breeding gold rams in your own freshwater fish tank!

In general, these fish tend to be some of the smaller and more peaceful species of cichlid.

The gold ram does not exist in the wild, but its relative, the blue ram, does. Blue rams are native to the tropical grassland plains of Venezuela and Colombia, just east of the Andes mountain range; these regions are highly influenced by the wet and dry seasons.

These areas are also rich in plant diversity, giving the blue rams plenty of natural hiding places. Because of the low water flow and high amounts of detritus, these waters are usually a little more acidic with pH ranging between 5.2 and 6.7.

German blue rams are a more desirable aquarium version of the wild blue ram and are named after being selectively bred in Germany for their color. Gold rams have been further bred from the German blue ram to express specific colors and do not exist in the wild either. Because of this intense breeding, many variations of blue rams exist, such as the gold ram, electric blue ram, and balloon ram cichlid.

Gold rams are typically easy to identify due to their bright and attractive yellow glow. These fish are mango-colored and a bit darker around the head; the second half of the body is usually a lighter shade or white entirely. In the light, it is possible to see the distinct blue iridescent spots along the body and fins, similar to those markings on the German blue ram.

Gold ram cichlids are considered a dwarf cichlid. They have the same compact body shape as German blue rams and only grow up to about 3-4 inches (7.6-10.2 cm) when fully grown.

How long do ram fish live?

Sadly, due to breeding conditions, possible dye-enhancers, and sometimes growth hormone supplements, these fish do not live a long time. In fact, most gold ram cichlids only make it to 2-4 years of age even with perfect tank and water conditions.

In the limited amount of time you have with your fish, how can you make sure to give it the best care possible?

Gold rams don’t actually need an elaborate tank setup, even though it might seem like they do. Some hobbyists even have success keeping a breeding pair in a 10 gallon (37.9 L) aquarium, though we recommend a minimum tank size of 15 or 20 gallons (56.8-75.7 L). Water flow should be minimal, but enough to keep the aquarium well aerated.

While not necessary, gold rams will appreciate some natural foliage in the form of live plants and other vegetation, just like the ecosystems they would naturally be found in the wild. They will also love having options between caves and other hiding places, especially if you plan on breeding them.

Gold rams are not hardy. Due to inbreeding, unideal breeding conditions, and other artificial enhancers, these fish cannot tolerate imperfect water quality or parameter swings.

These fish need to be kept in a mature and stable aquarium with 0 ppm ammonia, 0 ppm nitrite, and a traceable amount of nitrates. Water temperature should be slightly higher than most other freshwater tropical fish at a constant value between 78-85° F (25.5-29.0° C). Gold rams need softer and more acidic water, with pH between 5.2-6.7; it may be worthwhile adding tannins in the form of Indian almond leaves or another natural supplement to bolster immunity as well as to soften and acidify the water.

Gold rams need stable water conditions, which can be difficult to maintain especially for beginners. Because of this and their already shortened lifespan, these cichlids are usually referred to as ‘expert only.’

Because gold ram cichlids are considered to be a dwarf cichlid and one of the more peaceful species of cichlid, these fish can often be kept in a community aquarium setting. If wanting to keep your gold ram in a community setting, it is best to have at least a 25-gallon tank (94.6 L) or more to allow for territories to be established; it will also help to add even more hiding spots for your rams to choose from to prevent aggressive interactions between species.

Otherwise, gold rams will do well with other freshwater tropical fish that prefer the same conditions. When searching for tank mates, look for species that prefer slow-moving currents, dense vegetation, and more acidic and softer water conditions. Some popular gold ram tank mates are cardinal tetras (Paracheirodon axelrodi), rummy nose tetras (Hemigrammus rhodostomus), and various species of Corydoras depending on the tank size.

One of the hardest water parameters that needs to be met between species is temperature as these fish need warmer water.

Can multiple rams be kept together in the same aquarium?

Gold rams don’t necessarily school together when put into larger groups. Instead, usually one male and one female pair up and claim a specific area in the aquarium. In general, it is best to keep this one to one ratio, though some hobbyists have had luck keeping two females for every male cichlid.

Can you keep rams with shrimp?

In general, it is not recommended to keep gold rams with smaller invertebrates. While these are peaceful fish, they are have also been known to be opportunistic eaters. Larger snail species should be safe from becoming a quick snack, but small shrimp and other invertebrates could end up becoming a meal at any given point.

If you are considering a small tank mate for your dwarf cichlid, make sure that it can’t easily fit in the mouth of your fish first!

Gold ram cichlids are desired for their intense yellow color. This color is the result of good tank husbandry, stable water quality, and a diverse and high-protein diet.

In general, gold rams are omnivores; this means that they eat both plant- and animal-based foods. These dwarf cichlids can sometimes be challenging to feed, especially if they’ve recently been added to a new aquarium. Because of this, it’s usually best to be prepared with a live food hatchery, whether it be brine shrimp or even cherry shrimp (Neocaridina davidi); live food will help stimulate the interest and natural predatory instincts of your fish.

Otherwise, gold rams will eat most types of fish food. They should be given a variety of live, frozen, and freeze-dried foods to ensure that they get protein from several sources, don’t get tired of just one food, and preserve their natural color.

Some good diet choices include worms (earthworms, bloodworms, Tubifex worms), brine shrimp, mosquito larvae, and high-quality fish flakes and pellets. Blanched vegetables, like spinach and cucumbers, may also be given from time to time.

Luckily, because blue rams come from waters with dense vegetation, they are not likely to munch on any live plants in the aquarium. However, it is still best to make sure that the plant is compatible with this specific cichlid before planting it in your tank!

What do gold rams eat in the wild?

In the wild, blue rams are known for sifting through the substrate for food by taking scoops up with their mouth and filtering it through their gills. By doing this, they catch organic detritus that has fallen from above and small organisms. Along with this method, they also look for food on rocks and branches and feed on larger organisms right out of the water column as well.

While these fish are of cichlid origin–a group usually known for their bold personalities and aggressive tendencies–the gold ram is a more tranquil and reserved variation. As mentioned before, it will take some time for your gold ram to acclimate to tank conditions when first added, but given the right time and care, a gold ram pair will light up the aquarium.

In general, these cichlids do best when kept in pairs. Once bonded, the male and female will claim a territory in the tank and spawn if conditions are right; during these spawning times, the parents can become more aggressive than usual, and might chase away other fish that get too close to their eggs. Even then, a bonded pair of gold rams with eggs will still not compare to the aggression levels exhibited by some other fish during spawning periods.

Many hobbyists keep variations of German blue ram cichlids not only for display in their aquariums but also for the joy of watching them breed. Bue rams make some of the best parents in the aquatic world and care for their eggs and fry until maturity.

How do you breed gold ram cichlids?

Some hobbyists like to set up a separate tank for their gold ram cichlid breeding pair, but it is also possible to remove them from the display at any given point if problems with aggression start to arise or if eggs/fry keep getting eaten.

You will know that the female is ready to spawn when her stomach turns a more reddish color and becomes plump. In a few days, she will lay the eggs; gold rams are not too specific about what they lay their eggs on, and they may end up on the aquarium glass, under plants, or in the corner of the tank! Once laid, the parents will work together to care for the nest.

Both the male and female will use a fin to wave water over the nest to ensure that the eggs are being well-oxygenated. If water quality is ideal and the temperature is stable, then the eggs should hatch around 5 days later. The fry will stay close to the nest and the parents will continue to watch over them.

There is some discussion about how good captive-bred gold rams actually are at parenting. Some hobbyists have found that their rams abandon the nest or simply fail to protect it from other tank mates. It is believed that this is either the result of low predation in the wild or the result of inbreeding of blue rams within the aquarium hobby.

Gold rams are a type of German blue ram that has been bred over the past several years for its desirable coloration and peaceful demeanor; however, because of this intense breeding, some fish have shortened lifespans and might not make the best parents.

These fish are one of the more difficult species to keep in aquariums as they require very specific and stable water parameters; even the smallest fluctuations can cause these fish to stress out. Gold rams are also one of the few cichlids available to be able to live in a community tank setting with other peaceful tropical fish and are a very popular species to breed.

If you have any questions about the gold ram cichlid, the German blue ram cichlid, or have had experience with any other relatives of these fish, don’t hesitate to leave a comment below!