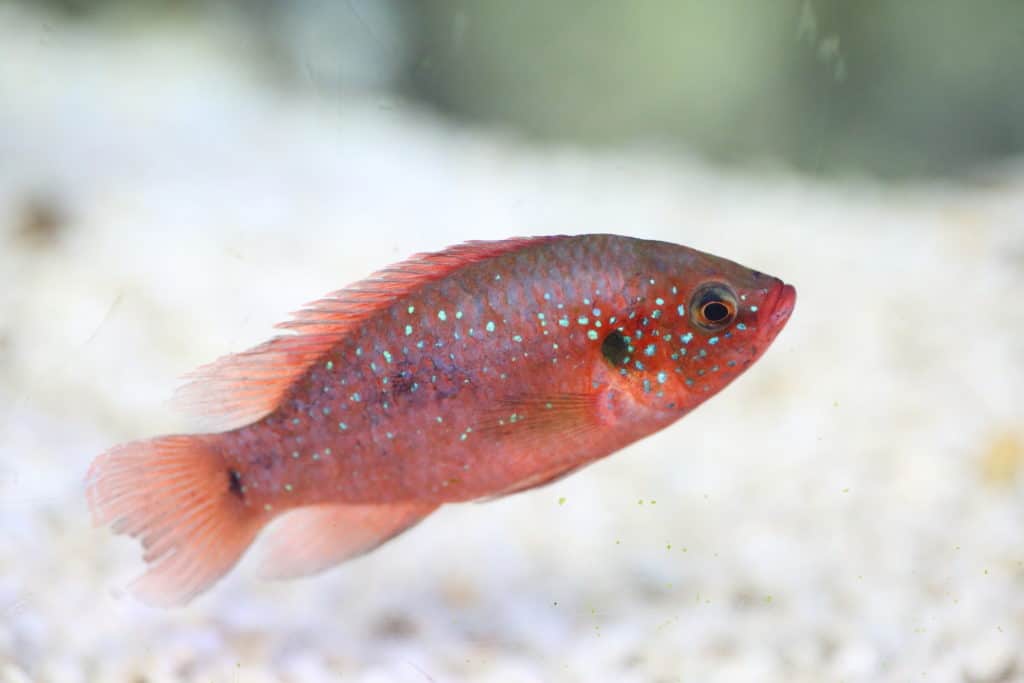 Are you looking for the gem that completes your cichlid tank? Or maybe you’re just venturing into the many different species of cichlid available, and the jewel cichlid has caught your eye. For whatever reason you’re looking into getting one of these breathtaking fish, definitely make sure that this species is right for your tank setup first as they can become very territorial!

Keep reading to find out everything you need to know about jewel cichlid care and keeping this freshwater fish in your own aquarium!

Hemichromis bimaculatus is commonly known as the jewel cichlid or jewelfish.

In general, the Hemichromis genus is referred to as the jewel cichlids and houses 12 different species. Jewel cichlids live in Africa and most are revered for their bright colors. This genus is not fully defined, and many specimens are not accurately identified due to hybrids and populations introduced by the aquarium trade.

This article will only focus on the jewel cichlid, Hemichromis bimaculatus, in the aquarium setting.

The jewel cichlid is mostly found along the west coast of Africa, spanning from Guinea to Liberia. They have also been documented more along with northern Africa, from Algeria to Egypt, but the occurrence is rare. Jewel cichlids are commonly found at the bottom of forested areas in smaller streams and rivers, with lots of overhanging vegetation.

Not much variety of food is available in these areas. The diet of this fish has been shown to include invertebrates, detritus, some algae, and other freshwater fish.

Note: some populations of Hemichromis bimaculatus are thought to be spread across Florida by way of aquarium introduction, but there is speculation of possible hybrid species and resulting false identifications.

Jewel cichlids are one of the most striking cichlid species available and appeal to beginner and experienced aquarists alike. They can grow to about 6 inches (15 cm), though size varies on tank conditions and quality of diet; most hobbyists report their fish only growing to about 4-5 inches (10-13 cm).

These fish are a deep ruby with iridescent spots of light blue across their body that really resemble small flashing rhinestones in the water! Hemichromis bimaculatus will have three dark spots: one on the gill flap, one mid-body, and one at the base of the caudal tail.

However, there are much other similar fish that share the same patterning. Here are some other species you’re likely to come across while searching for the next fish for your tank:

Hemichromis lifalili. This fish is also commonly known as the blood-red jewel cichlid. This species is mostly only found in the Democratic Republic of Congo in slow-moving and oxygen-rich water. They only grow to about 4 inches (10 cm) and are an even darker red than Hemichromis bimaculatus. These cichlids will also have rows of light blue spots, but will only have two dark spots instead of three; these spots will be on the gill flap and in the middle of the body.

Hemichromis guttatus. Not much is known about this species, and so these fish are commonly labeled as Hemichromis bimaculatus or Hemichromis lifalili. One of the main differences between this species and the other two cichlids is the dark spots across their body. These fish lack the caudal tail spot but have ones on the gill flap and mid-body. The key is to look at the spot on the mid-body:

How do I tell my female jewel cichlid apart from my male?

It is very difficult to tell a female jewel cichlid apart from a male. Male jewel cichlids tend to have a more reticulated (net-like) patterning on their fins. Their dorsal fins may also be noticeably pointed.

How fast do jewel cichlids grow?

Given the fact that cichlids can live up to 10 years, your fish has a long time to reach full maturity! The rate at which your fish grows will also depend on the quality of care, diet, tank size, and other aquarium conditions. The species of the cichlid will also matter as potential size changes from fish to fish.

In addition, age and size will always be affected by water conditions, tank size, and overall aquarium care. Your fish is more likely to live for 5 years than a maximum of 10.

On average, you can expect your fish to reach its expected size in 2-3 years; this does not mean that your fish can’t exceed these expectations though, and may continue to grow!

As a cichlid, these fish can get quite aggressive. They should never be thrown into a typical community tank, though they may do well in a cichlid community tank as we’ll discuss later.

Plenty of hides in the form of rocks, plants, and driftwood, should be added throughout the tank to help prevent territorial issues. However, jewel cichlids are notorious diggers and burrowers so any plants should be securely planted. While some care sites may say that a sand substrate is better for your jewel cichlid, hobbyists have found no true difference between keeping their cichlids on sand or on gravel.

As for live plants, Amazon swords and Cryptocorynemay be able to withstand your jewel cichlid.

These fish will do best in a single-species tank or a cichlid community tank. Unfortunately, the best way to get a pair of these fish is by either buying them as an established pair or introducing a group into the tank and waiting for a pair to happen. Some hobbyists may choose to keep their jewel cichlid with other types of cichlids as well.

Surprisingly, there are a few success stories of keeping these fish with tropical community fish, like tetras, catfish, and barbs. The best way to achieve this is probably by providing a large enough tank size where each fish can live in its own respective space. Water parameters should be completely stable and enough food should be provided to not cause any reason for aggression.

While this is a possible setup, remember that each fish has its own personality and that these cichlids feed on smaller fish in the wild. Our ultimate suggestion would be to not house these fish in an aquarium with other freshwater fish that you wouldn’t want to be eaten or to keep them completely alone.

Jewel cichlids will roam around the entirety of your tank but mostly like to stay towards the bottom. There, they will burrow and look for hiding spaces, and potentially even spawning areas if you’re lucky enough!

These fish can be fin-nippers, so take care to regularly check up on anything else in your aquarium for signs of injury.

Like most cichlids, the jewel cichlid displays intense parental care where the paired fish do almost everything together in the aquarium. We will discuss this relationship more in-depth in our breeding jewel cichlids section.

The safest answer to this question would be: yes. Like all cichlids, the jewel cichlid is no exception to displaying aggressive behaviors. Especially during spawning times, the male can become especially territorial over certain areas of the aquarium.

It is not unheard of for these fish to go after your hand if you need to go in the water for some reason!

In the wild, jewel cichlid diet consists of invertebrates, small freshwater fish, and some algae. This makes them a typical omnivore. However, diet is especially important for maintaining color and promoting spawning.

These fish will do best with a variety of foods, like flakes specifically formulated with cichlids in mind, live foods, and frozen foods. Their diet should be high-quality and the selection should change from day to day to keep your jewel cichlid interested and balanced.

Just make sure to not overfeed your fish as your cichlids will definitely readily accept anything they’re given!

Many hobbyists get into keeping cichlids to gain experience with aquarium breeding. The jewel cichlid is especially coveted for its intense coloration.

During these breeding periods, water conditions should remain unchanged and give consistent readings, and diet should be varied and of high-quality; steadily raising the water temperature to 80-82° F (26.7-27.8° C) may help induce spawning.

One of the most interesting things about this fish is their monogamous relations; the jewel cichlid pairs for life. The initial pairing behavior is dangerous as each fish will essentially ‘size each other up,’ which can possibly result in death for the smaller fish. However, once the relationship is sealed, the male will eventually grow a lot larger and would actually die protecting the female.

Once paired, these fish will do everything together, including preparing the nest and actively caring for the eggs and fry. You will know that your jewel cichlid pair is ready to mate when their colors intensify and aggression rises; if you have any other fish in the tank, it is recommended to remove them as there is a good possibility they will be injured or killed. The pair will then pick the perfect spot in the aquarium to spawn; this is usually a flat surface that is slightly angled, like on a rock or even on the side of the tank.

A male jewel cichlid can become especially aggressive and demanding towards the female at this point, so often check to make sure that both cichlids are unscathed.

At this point, the female jewel will usually move the brood to these dips; this may happen a few times. After another day, the brood will become free-swimming. Provide infusoria at first and then offer crushed fish foods as they start to grow larger.

The parents will take care of the fry for about a month. At this point, it is advised to remove the juveniles from the tank as they can become aggressive towards each other if space is limited and the parents may actually be getting ready to spawn again.

Can jewel cichlids breed with other cichlids?

Yes, it is possible to cross-breed cichlid species to create a hybrid. However, it is not advised at all and is actually looked down upon in most cases.

Many aquarium keepers are actually very against the idea of purposefully creating hybrids and believe that eggs should be immediately destroyed. Not only would these ‘designer’ hybrids overwhelm the aquarium trade, but the health of the fish would also be compromised due to mixed genes.

There is no telling what kind of health issues could arise from these pairings, and most hobbyists don’t want to cruelly experiment on their fish to see the results.

Hemichromis bimaculatus is definitely a beautiful fish, but not every hobbyist has the right aquarium setup to keep them happy. A single-species tank works best, especially if you have plans for breeding, but some have had luck introducing these fish into either a cichlid community tank or an otherwise-modified community tank.

Watching these fish pair and breed in the aquarium setting is like no other species available, but their intense aggression always needs to be monitored.

If you have any questions about the jewel cichlid (Hemichromis bimaculatus), other members of Hemichromis, or have to experience keeping any of these freshwater fish in your aquarium, don’t hesitate to leave a comment below!