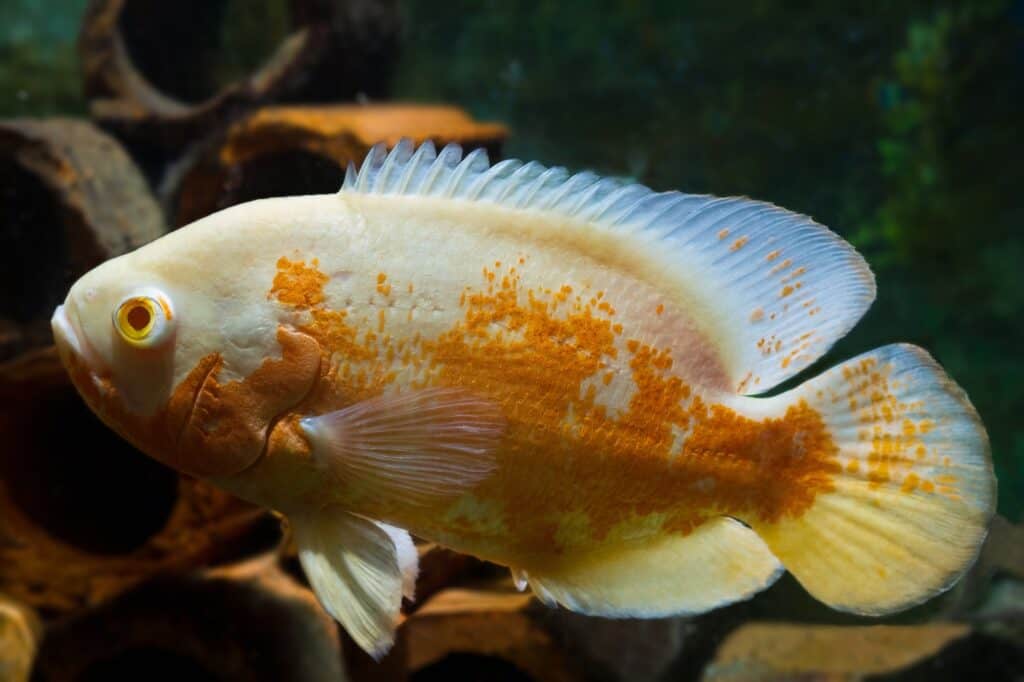 The tiger oscar is one of the most personable and exciting species that you can have in your freshwater aquarium. But did you know that these South American fish also come in an albino variety?

Albino oscars have all of the personality that their darker-colored relatives have, but have a platinum white body with beautiful bright pink markings that can’t be missed. These fish can have some demanding needs, so it’s best to be prepared for their diet and size.

Keep reading to find out everything you need to know about albino oscars and how they’re different from other kinds of oscars!

While usually referred to just as oscars, all variations of Astronotus ocellatus belong to the Cichlidae family and are actually a type of cichlid.

In the wild, these fish live throughout South America and can mainly be found along the Amazon River in Peru, Brazil, French Guiana, and Ecuador. There, they stick to slow-moving and shallow waters with lots of plants and vegetation as well as large structures for shelter.

Due to the oscar’s popularity in the aquarium hobby, it has been unintentionally been introduced to many non-native ecosystems.

Wild South American oscars are various tones of brown, green, grey, and black and often have orange mottling along the sides of their bodies. They have a distinct eyespot at the base of their tail fin that can help confuse larger fish and animals.

The aquarium hobby has since bred these fish to exhibit a variety of colors including lemon, red, and tiger variations. One of the rarer colorations to come across is the albino tiger oscar. However, these fish are often confused with the lutino coloration.

Albinism is the result of one or more defective genes failing to produce or distribute melanin in the correct amounts or at all. As a result, areas where melanin is present, like skin and hair, lack pigment or intensity in color.

A true albino oscar will be one that has a near-white base color with pink mottling. The defining feature of albinism for these fish is the pinkish-red eye. It is very common for aquarium stores to throw a blanket ‘albino’ name on any oscar cichlid that is white, but this is not true albinism.

If the fish is not genetically albino, then it is lutino. It can be very difficult to tell the difference between these two colorations, especially since lutino fish can start to develop their darker colors later on.

As we said before, you will want to check for a pink eye when looking for a true albino oscar. A lutino oscar may have a pinkish eye and a white body, but may also have orange mottling and greying around the edges of the fins.

It can also be easy to mix up lemon oscars with albino oscars and lutino oscars.

How big do albino oscars get?

All Astronotus ocellatus, including albino oscars, can all get to be around the same size. These fish can grow very large and very quickly which can be deceiving to beginner enthusiasts that want to buy oscars as juveniles.

Oscar fish can easily reach a foot (30.5 cm) long when fully grown, though it’s not unheard of for them to push 2 feet (61.0 cm). It is also believed that they can grow about 1 inch (2.5 cm) every month until they reach their mature size.

How long do albino oscars live?

Not only do oscars grow to impressive sizes, but they can also live for a considerably long time!

In captivity, these fish can easily live to be 10 years old, with wild ones even living to 20.

While the albino tiger oscar might be much rarer than other colors of oscar, they don’t require anything different. These are big fish and they need a big tank.

The minimum tank size recommended for albino oscar fish is 55 gallons (208.2 L) for one fish with lots of extra filtration; a 75 gallon (283.9 L) gallon is even better for one oscar and will allow space for your fish to reach its full potential size without the worry of running out of room.

A 100 gallon (378.5 L) tank should be able to house two oscars for some time, though nutrient levels will need to be watched as well as growth rate. While some hobbyists use larger tanks as grow-out aquariums for several oscars, having more than two in the same tank can quickly lead to overcrowding.

Otherwise, these fish don’t require anything too special. They are a digging species so a soft sand substrate will keep your fish from injuring itself. Plenty of secured bogwood and driftwood structures as well as dimmed lighting will give your fish the protection they need to stay happy.

Oscars usually do best in a species-only tank where their full personality can shine. It’s also important to keep in mind that more fish means that you need an even larger aquarium in the long-term.

However, if you have the space and the filtration power, then severum cichlids, arowanas, Jack Dempsey’s, and plecos should be compatible with your fish. Remember that each oscar has its own personality and compatibility is never guaranteed; they are still a type of cichlid after all!

Oscars are popular fish because of their extremely outgoing personalities. They are usually out and about in the front of the tank and can even be trained to come to the surface when it’s time to eat.

Because oscars can get so big though, they tend to be labeled as aggressive.

Albino oscars aren’t overly aggressive fish. The problem is that they will eat any smaller fish that can fit in their mouths.

You might find that your oscar chases after other fish. Remember that oscars are a type of cichlid and this could still be a sign of possible aggression. In this case, the stressed fish should be removed and placed into a quarantine tank until ready to be transferred to another aquarium.

Albino tiger oscar care is relatively straightforward as long as you give them the space they need. These fish are omnivores and are very likely to eat any food you put in front of them.

Always make sure that you’re not overfeeding your fish as this species, in particular, will beg at the top of the tank until you give them something!

What do albino oscars eat?

As omnivores, these fish will accept a variety of animal- and plant-based foods. They can be given an assortment of live, frozen, and freeze-dried food options, like worms (earthworms, bloodworms, Tubifex worms), brine shrimp, and feeder fish.

Oscars do best on a high-protein diet and should be regularly offered oscar- or cichlid-formulated flakes or pellets.

These fish may also be given blanched vegetables from time to time, like spinach and cucumbers, though some oscars prefer food that activates their natural predatory instincts.

Albino oscar fish can be difficult to breed in the aquarium. Not only do they require a lot of space, but it is also very difficult to tell the males apart from the females, making a guaranteed pair difficult to find.

Even given enough space for a mated pair, aggression is always a possibility and could lead to serious injuries. If you’re lucky enough that your fish accept each other and do mate, then you also have to make sure that the eggs and subsequent fry aren’t eaten by the parents.

While breeding oscar fish isn’t impossible, it’s very unlikely to be successful and will take some considerable amount of time and effort from the aquarist.

The oscar fish is one of the most sought-after freshwater fish due to their loveable personalities and black, red, and orange colorations. Since this species has been introduced into the aquarium, the elusive albino tiger oscar has been the dream of many oscar owners.

However, body-color can be deceiving with this high-maintenance fish, and many variations of white oscars aren’t actually true albinos. Nevertheless, your oscar fish will make a fantastic addition to a larger aquarium!

If you have any questions about oscars, other species of cichlid, or have had experience breeding the incredible albino tiger oscar, don’t hesitate to leave a comment below!