How Many Ghost Shrimp Can I Add per Gallon? (+ Other FAQs) 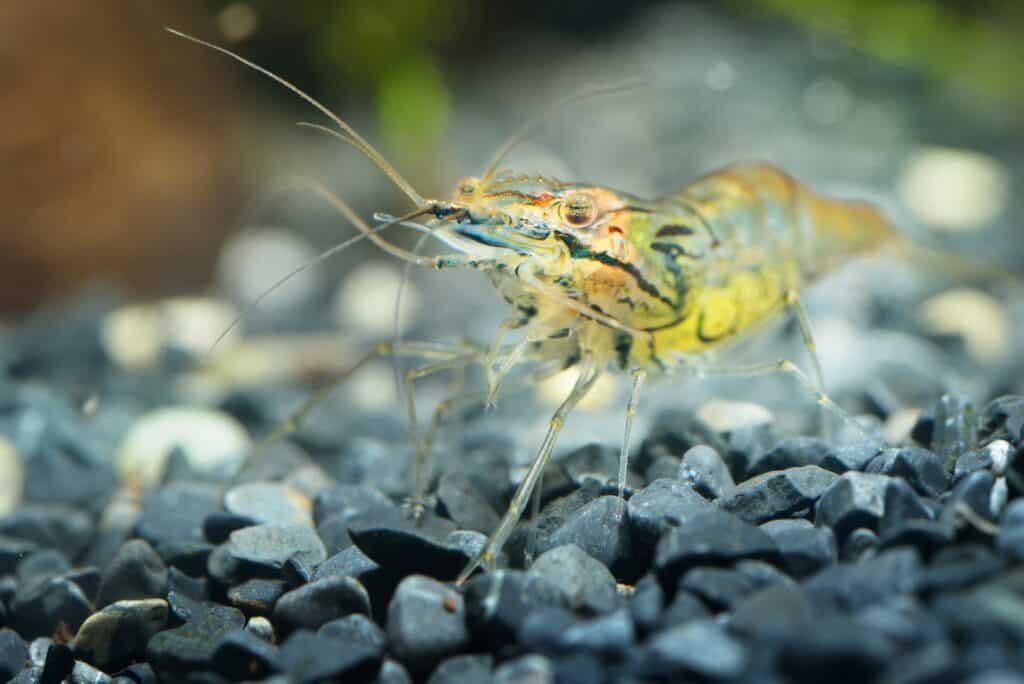 If you’re looking to start a ghost shrimp colony, or just add a few to your tank, you might be wondering how many shrimps you can add per gallon. Usually, five ghost shrimp can be kept per gallon of water.

There are several other factors to consider, however. Read on to find out the things you’ll need to consider when keeping these aquatic creatures.

How Many Can Be Kept Together?

As stated, the general rule is five ghost shrimp per gallon of water, but this number can fluctuate depending on the size of the shrimp, the number of tankmates housed with them, and so on.

Following the general rule, this is how many ghost shrimp can be held in each size tank:

Ghost shrimps are very small, just over two inches long, but the estimates above can’t just be applied to any tank because there are other factors to consider, including:

Just like shrimp, plants take up space in your community tank. If your tank is heavily planted and an average size, add only 25 ghost shrimp at maximum. A tank overpopulated with plants can lead to an overcrowded tank, stressed shrimp, illness, and eventual death.

If you are looking to start a community tank with fish, snails, and other aquatic creatures, you have to add them into the mix when considering tank space. For each fish in your tank, reduce the amount of freshwater shrimp by at least five.

This shrimp species aren’t as messy as other tankmates. They keep your aquarium cleaner by eating decaying and dead debris.

However, the more aquatic creatures you have in your tank, the more waste will be produced. Your filtration system will need to be able to keep up with your ghost shrimp tank.

If you plan on pairing ghost shrimp with aggressive fish, you’ll need to add more places for your freshwater shrimp to hide. If you have peaceful fish, you can keep fewer decorations.

There are many compatible tank mates for ghost shrimp, including:

Do You Need More Than One Shrimp?

Ghost shrimp are social creatures that enjoy each other’s company; however, they don’t have to live in groups and can live alone.

How Many Shrimp Are Needed For a Colony?

To start a colony, you need ten ghost shrimp in your community fish tank. Keeping two females for every male is best.

Ghost shrimp typically don’t need a heater, and the slight temperature changes between day and night can mimic their natural habitat.

Here are some additional tips for starting a colony:

What Can Happen If You Keep Too Many Shrimp?

If you have too many shrimps in your community aquarium, it can cause several problems, including the following:

What If You End up With Too Many Shrimp?

Because shrimp breed so easily, you may end up with too many. You’ll need to avoid overcrowding, which can cause a dirty tank, poor water conditions, and deoxygenated water.

Nonetheless, here are some options for what to do if you end up with too many shrimp:

Certain fish eat ghost shrimp, including goldfish, cichlids, gourami, etc. Don’t overcrowd your tank with aggressive species of fish, however. Depending on the size of your tank, you will likely only need two or three aggressive fish.

While predators aren’t the most humane solution, it doesn’t require much work on your part.

If you end up with excess shrimp, another option is to consider extra space by getting a bigger tank. A larger tank can also be more beneficial in the long run because they take longer to become dirty with debris.

If you don’t want breeding to get out of control, the other option is to separate the males and females to prevent breeding.

Many fish stores will buy ghost shrimp from you, or they can be sold to other aquarists.

What Is the Ghost Shrimp’s Lifespan?

Ghost shrimp usually live up to a year or more.

How Often Should I Clean Their Tank?

It is recommended to clean your pre-filter once every two weeks, your main aquarium filter monthly, and change 30 percent of the water weekly.

What Do Ghost Shrimp Eat?

These creatures are opportunistic eaters that will consume nearly anything; besides debris and algae, they will also eat fish flakes, shrimp pellets, fish pellets, and more. They also need calcium supplements for a healthy shell.

How Easy Is It to Care for a Ghost Shrimp?

Caring for ghost shrimp is fairly easy. Provided they have a varied diet and proper water conditions, they’re generally healthy. Just make sure to avoid sharp decorations and have enough aquarium capacity.

What Is Their Temperament?

Ghost shrimp are generally peaceful aquatic creatures. If aggression occurs, it’s typically due to a lack of space or other stress-inducing factors.

Even though ghost shrimp live just a short time, they do molt frequently. How often they molt depends on how quickly they grow and how much they eat.

Hiding spots are very important to provide places for your shrimp to molt in peace. Molting can take several days, so if your shrimp disappear, don’t worry. It’s important not to disturb them during the molting process and cause stress.

Generally, you can keep up to five shrimp per gallon of water, but this number can vary based on the factors we mentioned. This type of ghost shrimp can multiply quickly, so it’s best to start out with a small number first.

As long as you keep the proper aquarium water conditions and tank environment, you’ll keep your shrimp happy and healthy.