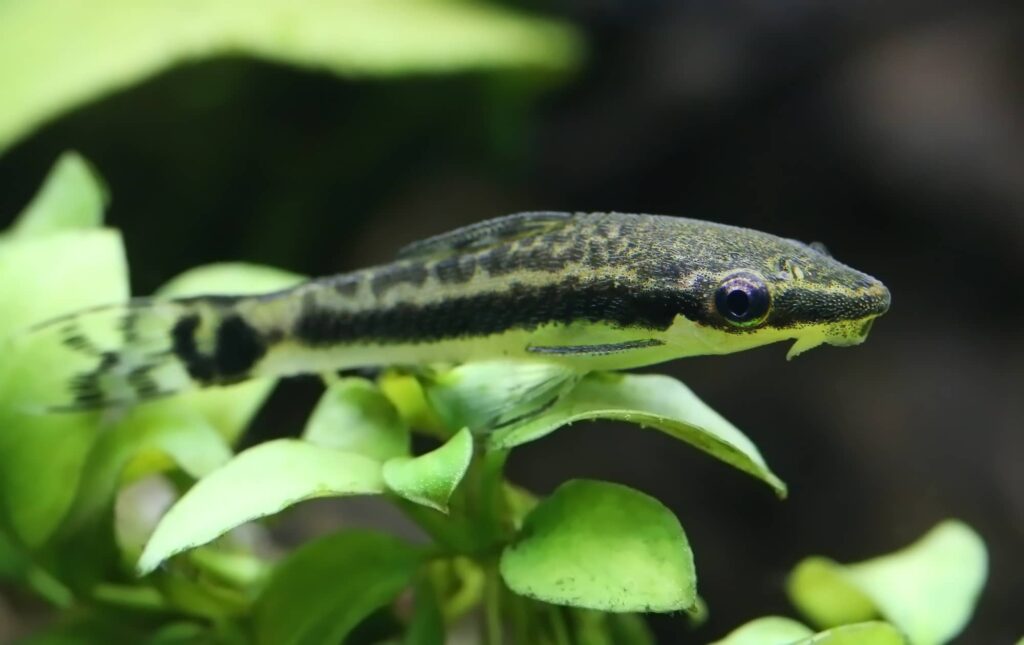 Otocinclus, or Otos as they’re affectionately known to many hobbyists, can make an interesting and useful addition to tropical, freshwater community aquariums. In total, there are 19 species of Otocinclus, but in this article, we’re focusing on Otocinclus vestitus, the little catfish characterized by the dark stripe on its back.

Read this guide to find out everything you need to know about keeping these peaceful fish.

Otocinclus is a genus of freshwater catfish belonging to the Loricariidae family, which encompasses a diversity of fishes from over 680 species. Often commonly called “Oto” or “Dwarf Sucker,” the Otocinclus genus of catfish is especially diverse, coming in a range of different colors, patterns, and sizes.

In the wild environment, Otos live in shallow rivers and associated streams of South America, especially the rivers of Venezuela and Northern Argentina. Interestingly, they are not found in the Amazon River that traverses the continent.

In South America, the water is tropical and well-oxygenated with a neutral pH. The substrate is generally soft and sandy and littered with wood, rocks, and other debris. The habitat is well-lit by sunlight shining through the shallow water, and there is some sparse aquatic vegetation and plenty of algae, too.

Otocinclus are peacefu catfish that make a nice addition to your tank, but they are also incredibly helpful creatures. As an additional fish in your cleaning crew, they search for algae to graze on along the surface of aquarium glass and decorations, or on the leaves of an aquarium plant.

How long do Otocinclus vestitus live?

These beginner-friendly fish can live between 3 to 5 years if given a high-quality diet and kept in a clean tank.

You can expect to pay from $3 and $5 per fish, depending on the species and the size of the fish.

Their body is cylindrical in shape, narrowing toward the head and tail fin. They have strong suckermouths that they use to latch onto wood, rocks, aquarium viewing panes, or any other larger surface. Once secured in place, these peaceful catfish are safe from being swept away by the current and spends their time grazing on green algae.

These catfish are armor-plated, having rows of hard scales across their body that protect them from attacks by aggressive tank mates or damage from rough substrates. Otos are not labyrinth-breathers like betta fish, but they do have a limited ability to breathe atmospheric air via a hollow duct situated between the fish’s stomach and esophagus.

Otos have bodies of a silver color with a lateral stripe of varied brown colors. Females are generally larger and broader in shape than males, especially when viewed from above or below.

These peaceful little creatures preferr to keep to themselves. Skittish by nature, Otos will dart for cover if they feel threatened by larger tank mates.

Most of the time, they will hang out at the bottom of the tank or eat green algae off the aquarium glass and decorations. These social fish usually stay together in groups. Often, you can several clinging to the glass, allowing you a good view of their undersides and suckermouths.

What tank conditions does Otocinclus need?

As with all fish species, the ideal tank setup is one that replicates their natural habitat as closely as possible.

As Otos are small, a group of four to six individuals can be kept in a 10-gallon tank or 20-gallon tank. Otos are happiest when kept in small groups of seven or more individuals. Overcrowded tanks can lead to several big issues, so be sure to allow 1 gallon of water per 1 inch of fish so you have plenty of space for a group of Otos and some other tank mates.

A rectangular tank with plenty of floor space is the most suitable setup for this species, providing plenty of swimming space.

Otos are bottom-dwelling fish, spending most of their time on the bottom of the tank or the decorations associated with it.

For that reason, you must provide a soft, fine-grained sandy substrate that won’t scratch or damage the fish’s vulnerable underside. Coarse substrates should be avoided as that could injure your fish.

You’ll need to provide plenty of surfaces for biofilm and algae to grow on so that the Otos have plenty to eat. Smooth stones and driftwood are ideal for that, and you can add a few rocky caves to provide hiding places, too.

Plants are also great for offering shelter and will also act as a growing space for algae. Otos are herbivores, but they eat algae, not plants, so your aquatic planting will be safe.

The aquarium water should be kept pristine, as Otos do best in a cleaner tank than most other larger fish will tolerate. Levels of ammonia and nitrites in the water must be zero, while nitrate levels should be at 20ppm or below.

Otocinclus vestitus is a tropical species that appreciate an aquarium water temperature between 72° and 79°F. The water pH should be close to neutral, ideally between 6.8 to 7.5, and a water hardness of 15dH.

Lighting in the aquarium should be provided between 8 to 10 hours per day so that your aquatic plants can grow and photosynthesize. Standard aquarium lights or natural lighting will be fine.

You can replicate the dappled conditions of the Oto’s home environment by using floating plants to create shade. However, you’ll need to keep on top of trimming and thinning out the plants so that the tank doesn’t become too dark for your other plants.

Since Otos need very clean water to thrive, an efficient filtration system is essential. Although these fish can happily live in a tank with a reasonable flow rate, it’s advisable to buffer the flow slightly so that the fish don’t get stressed. Excessive tank disturbance can cause high anxiety levels in Otos.

Carry out partial water changes of up to 20% every couple of days, and keep on top of filter maintenance. Once a month, you’ll need to rinse the filter media in tank water to remove any sludge that would impede the flow of water through the media. When the media is spoiled, replace it in line with the manufacturer’s guidelines.

What are good tank mates for Otocinclus vestitus?

As previously mentioned, Otos are great community fish that can live in groups. In fact, the larger the group, the better, as far as the Otos are concerned.

There are plenty of popular tank mates for your Otos, including:

Also, you can keep invertebrates. Snails and shrimp are interesting additions to your aquarium community that can also make useful members of your cleaning crew. Just be careful that you choose sturdy plants that the snails won’t destroy.

The Otos’ small size can make them a target for larger, predatory, or aggressive fish. So, many of the cichlids are not a good choice. As a general rule, avoid including large, carnivorous semi-aggressive species that could eat your little Otos.

What do Otocinclus vestitus eat?

Otos are herbivorous fish whose main natural diet is algae. That can be a problem if your tank doesn’t have a lot of algae growing in it, as the Otos will very quickly demolish what there is.

So, you’ll need to supplement that diet with algae wafers. You can also feed your Otos blanched green vegetables, such as spinach, zucchini, and lettuce. Simply chop off a couple of small pieces of veggies and add them to the tank once or twice a week. Remove any uneaten pieces of food from the aquarium after 24 hours. Homemade fish foods can also be offered to your Otos.

One common problem with Otos is starvation if the tank doesn’t have enough algae to support the population of fish living there. So, you’ll need to keep a very close eye on algae growth and supplement that with fresh veggies or algae wafers when necessary. Be careful when cleaning your tank that you don’t remove algae and biofilm from the tank surfaces.

Although Otos are easy to care for and suitable for a beginner’s aquarium, they can be somewhat fragile fish. In fact, you may have a few deaths immediately after introducing new Otos to your tank.

Otos can suffer from a few common fish diseases, including Ich, fungus, and bacterial infections. However, if the tank is clean, the fish are not stressed by aggressive tank mates, and they have plenty to eat, your Otos should remain healthy fish.

Ich is also commonly called Ick or White Spot Disease and is just about the most common disease that attacks pet freshwater fish.

White Spot Disease is caused by an aquatic parasite. The parasite latches onto the fish’s fins, gill, and body, appearing as a sprinkling of white dots that resemble grains of salt or sand. Affected fish flash or flick against solid objects within the tank in an attempt to remove the parasites.

The Ichthyophthirius multifiliis parasite lives in most aquariums without causing any issues for the fish until they are weakened by stress or some other form of disease or injury. To avoid Ich affecting your Otos, keep the tank clean and properly maintained, ensure that the water parameters are within acceptable limits, and feed your fish a correct diet. Also, keep an eye on your Otcinclus’ tank mates and remove bullies.

Ich is pretty easy to treat once you’ve identified it. Raise the water temperature slightly, and use an over-the-counter Ich treatment, following the full course to kill all stages of the parasite’s life cycle.

There are many species of bacteria living in freshwater fish tanks, many of which are harmless unless the fish are weak or injured.

Bacteria can attack your fish in different ways, appearing as ulcers, torn fins, missing scales, red patches on the skin, and general malaise. Internal bacterial infections can cause the fish to become very lethargic, lose their appetite, and swim erratically.

Depending on the cause of the problem, bacterial infections can be treated with medication that you can get from your local fish store.

Otocinclus vestitus is not an easy species to breed in captivity. However, it can be done if luck is on your side and you keep a healthy tank.

Although it is difficult to determine the sex of Otos, you have a good chance of getting a mixture of male and female fish if you keep a large group. Ideal tank conditions are essential to encourage your Otos to breed. That means that you need a scrupulously clean tank with the correct water parameters for the species, and you’ll need to provide the fish with a nutritious diet and plenty of food.

In the wild environment, rising water temperatures can act as a trigger for the fish to mate. So, if you raise the tank temperature slightly, that can encourage spawning.

The tiny fry hatch and are free-swimming within a couple of days. The youngsters feed on algae, biofilm, and bacteria around the tank, soon beginning to eat the same foods as the adult fish.

Are Otocinclus vestitus a good choice for my fish tank?

These fish are easy to care for, making them suitable for a beginner. Also, Otocinclus shares the same requirements for water conditions as many other tropical species, so finding tank mates for them is pretty straightforward.

Otos are active bottom-dwellers that make a wonderful addition to your aquarium cleaning crew, as they are almost exclusively algae eaters.

Do you have Otos in your tank? How effective at clearing away excess algae are they? Tell us about your cleaning crew in the comments box below.