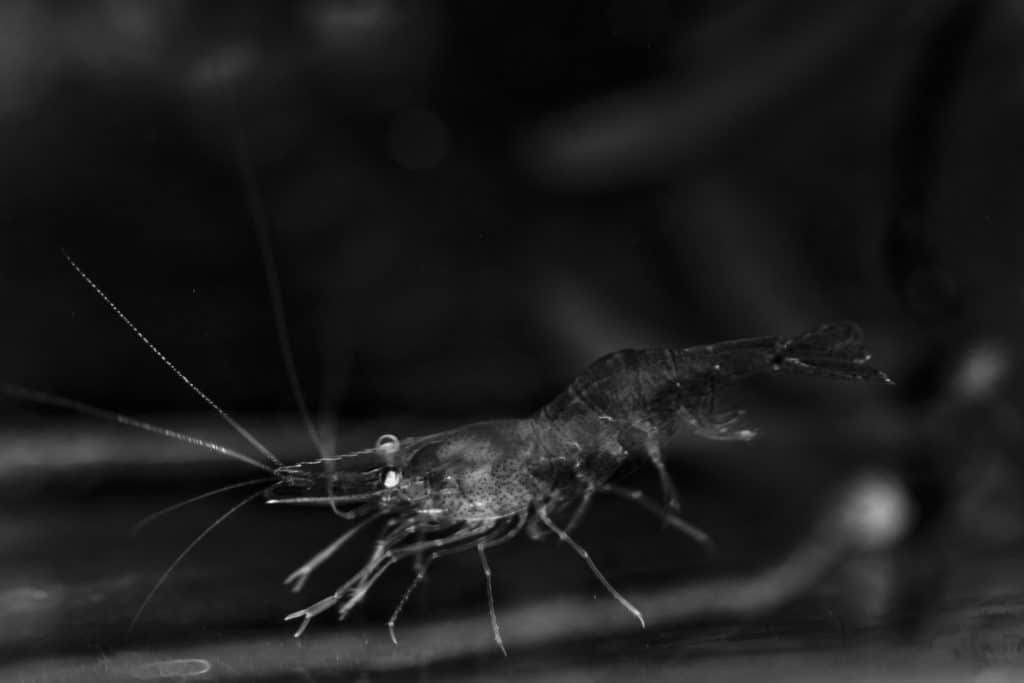 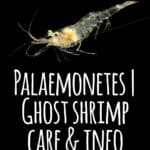 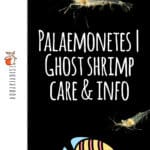 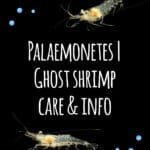 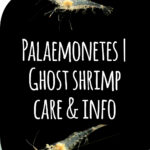 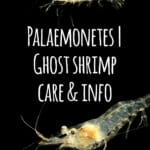 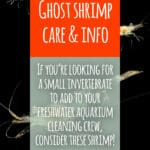 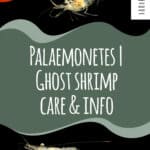 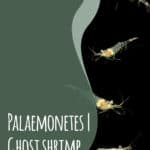 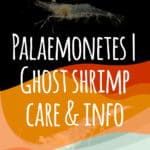 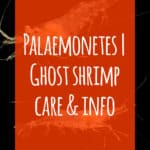 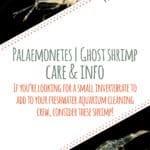 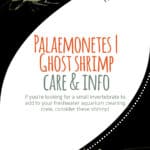 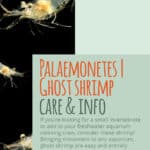 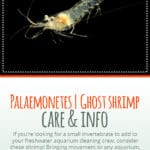 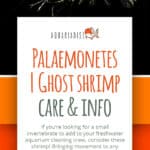 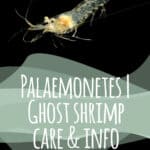 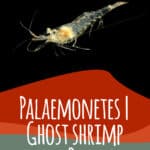 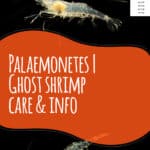 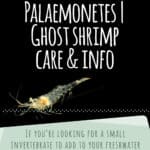 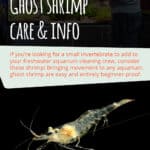 When it comes to keeping shrimp, most freshwater aquarists lean towards more exciting and colorful dwarf shrimp, like the Amano shrimp or Cherry Shrimp. Ghost shrimp are just as fun to watch and are often sold at aquarium stores for very low prices.

If you’re looking for a small invertebrate to add to your freshwater aquarium cleaning crew, consider these shrimp! Bringing movement to any aquarium, ghost shrimp are easy and entirely beginner-proof.

Keep reading for everything you need to know about ghost shrimp care, breeding, and feeders in the aquarium environment!

Palaemonetes paludosus is commonly known as ghost shrimp, glass shrimp, or the eastern grass shrimp. The species was first described in 1850 by Gibbes and is categorized alongside many other types of Palaemonetes.

Ghost shrimp live in freshwater areas across the southeastern United States. These shrimp prefer a heavily planted environment for easy hiding and often reside in lakes where the water is calm. However, ghost shrimp have been documented in brackish water and located as far west as Louisiana, Texas, and California. Their origin is not completely understood, and their popular use in aquarium keeping has caused their range to increase.

Ghost shrimp are considered a keystone species for many types of larger fish and bird, meaning they are essential to the food chain. They filter feed on phytoplankton at night and use the surrounding plants to hide during the day. Their abundance changes with the seasons, with increased numbers from May to August.

What is the average lifespan of a ghost shrimp?

On average, ghost shrimp live for one year given ideal water conditions. They are either eaten by larger predators or simply die of natural causes.

Ghost shrimp get their name from their color (or actually, lack thereof). As a dwarf shrimp species, they are a small shrimp and tend to be mostly clear with some muted shades of yellow, orange, grey, and brown. Different Palaemonetes species may have varied colors of dots and other markings. Their translucency allows you to watch their inner workings, which is always fascinating when a shrimp has just eaten.

It is common for males to grow up to 1.5 inches (4 cm) in length, with females hitting the 2-inch (5 cm ) mark. Female ghost shrimp also often show a green saddle and may have eggs under the abdomen, making them easily distinguishable from the males. Both are usually more streamlined than Amano shrimp.

Ghost shrimp exhibit sexual dimorphism in both the wild and in the aquarium setting. This is when the male and female of a species differ in appearance. Apart from the males being smaller, their pleopods (a forked swimming limb) have a different structure and are generally larger than those of female ghost shrimp.

Given their size, it’s recommended to have a tank of at least 5 gallons (19 L). Ghost shrimp are known to become aggressive and territorial if there are too many other shrimp and fish in a small water volume. Despite this, stocking recommendations vary among aquarium keepers and there isn’t really any agreement on the best way to go. While some people may only recommend one ghost shrimp per gallon (3.8 L) of water, others recommend 3-4, all the way up to 10 per gallon. It is always important to consider the bioload and the effect of additional fish and invertebrates in your aquarium.

Whatever the numbers, these small shrimp do well with live plants that allow them to get away from larger, more aggressive fish and shrimp. They enjoy grazing on driftwood and leaves, feeding on biofilm, and skimming the surface of the water. As such, it’s a good idea to add plenty of this décor to your tank for a natural environment that provides both food and protection. Some wood, or even something like a shrimp hide, will be greatly appreciated by your ghost shrimp!

As for water quality, ghost shrimp tend to do best at tropical temperatures (72 to 82 degrees Fahrenheit) with a pH between 7.0 and 8.0. Ammonia, nitrites, and nitrates should always be monitored. When it comes to filtration, sponge filters are your best bet since they help keep the water oxygenated without too strong of a flow, while giving the shrimp an extra place to graze. Unlike some other filter types, a sponge filter can’t suck up very small shrimp, making it the preferred choice for most shrimp tank enthusiasts.

Ghost shrimp get along best with small, peaceful community fish. As long as the shrimp has plenty of live plants and hiding places to keep themselves safe, they are easy to keep. They are especially vulnerable to predators during molting periods when their new shells are at their weakest.

Although ghost shrimp are considered by most to be peaceful, there are reported cases of ghost shrimp harassing and attacking fish and other shrimp. More so, the concern is with your ghost shrimp being eaten by larger fish! Other good fish to keep in your tank are tetras, hatchetfish, and danios. Larger loaches and catfish should be avoided. A good rule of thumb for your tank is if you think your ghost shrimp can fit into one of your fishes’ mouths, then it probably will.

Ghost shrimp are also often kept in a Betta splendens tank. However, bettas may snack on a small shrimp or two, and they may have their fins attacked in return, especially the long-finned varieties. So if you keep ghost shrimp and bettas together, just have another freshwater aquarium handy in case things go south. This list contains a few more risk-free tankmate options for betta fish.

The best thing about ghost shrimp is that they’re not fussy when it comes to food; they’ll eat anything from algae to frozen foods. They are excellent at cleaning up uneaten food from other fish, making them a valuable addition to your tank’s clean-up crew. That being said, you should still supplement food specifically made for shrimp from time to time for replenishing trace nutrients important for growing new exoskeletons.

Sinking wafers and pellets will give the shrimp a chance to snag the food and scuttle off before other inhabitants gorge themselves. Go for a high-quality staple like GlasGarten (review here) to make sure the shrimp have access to all the nutrients they need to molt successfully. Given the chance, they will also scavenge the remains of deceased tankmates, as well as their own molts, for extra protein and calcium.

Ghost shrimp are a joy to watch. Whether they are free-swimming or grazing, they are full of life and bring excitement to any aquarium. Because of their size, they are more active during the night than the day in order to avoid becoming food. They fill the bottom areas of a tank, providing additional movement as they duck in and out of their hiding places.

If you optimize your ghost shrimp care, you’ll at least give them a chance to shine in your aquarium for however long they’re with you. Alternatively, you could consider trying your hand at breeding ghost shrimp and getting a small population going!

Around every month and a half, your ghost shrimp will go through a molting period. This is when your shrimp sheds its exoskeleton and creates a new one in order to grow. It is very easy to mistake a freshly-shed exoskeleton for a dead shrimp when looking into your aquarium! During this time, your ghost shrimp will also be in hiding among plants as it is at its most vulnerable and most likely to be eaten by other fish.

If you think your ghost shrimp has molted, allow a few hours to pass. If there are still no signs of your shrimp after that time, remove the exoskeleton from the tank. Examine the shell. The exoskeleton should not have any internal leftovers or remnants. If it ends up that your shrimp did die, make sure to test water parameters as soon as possible as you don’t want your tank to crash.

Most people consider ghost shrimp easy to breed. They’ll often reproduce on their own in your aquarium if they aren’t constantly being stressed by predators and water quality is good. That being said, if your goal is to purposely breed them to build up your colony or as feeder food, you will want a separate breeding tank with matching water parameters. If the pregnant ghost shrimp are normally kept in a community setting, the young may become food for the other fish and invertebrates in the tank.

There are various different methods of breeding depending on personal preferences and breeding goals. For example, some people wait until they see ghost shrimp with eggs before moving them into a separate tank to let the eggs hatch. Once the eggs have hatched a couple of weeks later, breeders then take out the females to avoid having them eat their own young. Larvae will feed on any plant detritus and algae provided. Once they have grown legs, their diet can be switched over to that of regular adult ghost shrimp. After a month and a half to two months, your ghost shrimp should be ready to join your main display tank!

When buying ghost shrimp, if your goal is for them to breed, you will want to have at least a group of 10 individuals (although more is better, when possible). They tend to range from $1 to $3 per shrimp, so they’re great for beginners since you won’t break the bank if your ghost shrimp care needs some fine-tuning. Their cheap price also makes them a great choice for live food for bigger fish.

You can buy your starter colony of ghost shrimp online here!

If you have any more questions about ghost shrimp care or want to share your own experiences with these fascinating aquarium shrimp, don’t hesitate to leave a comment below!