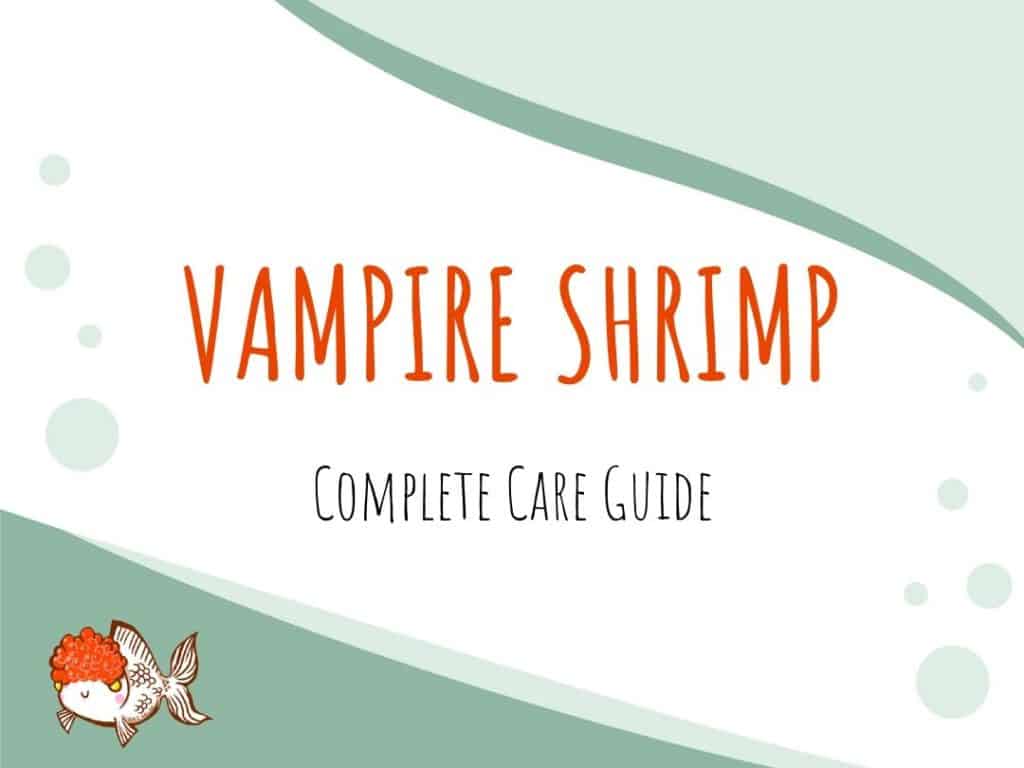 If you’re looking for a rare kind of freshwater shrimp that looks a little scary (but is completely harmless), then the vampire shrimp might be right for you. These shrimp are actually incredibly peaceful and can be seen sifting through the water column for food with their tiny fan-like appendages. They’re a little hard to find for sale within the hobby, but if you do happen to find one, a vampire shrimp could be exactly what the bottom of your tank has been missing!

Atya gabonensis come from the Atya genus which houses 13 species in total. Not much is known about these kinds of shrimp, but they are mostly documented in areas of freshwater around Central and South America as well as western Africa.

Vampire shrimp live in fast-moving and highly-oxygenated water with rocky bottoms so that they can anchor themselves and filter feed food particles out of the current. During the day, vampire shrimp will take cover under logs and rocks but will emerge closer to dusk to filter through the water column.

How long do vampire shrimp live?

In the right tank with exceptional water conditions, vampire shrimp can live up to 5 years. Though it is more common for your vampire shrimp to only live for 3 years. If your little shrimp manages to survive the first couple of months after being introduced into your aquarium, then you should have it for a decent amount of time!

It is pretty common for invertebrates, especially these shrimp, to die within the first month or two of having them in your tank. Mostly this is caused by the stress of being introduced into a new environment with different water parameters and tank conditions.

Vampire shrimp can grow up to about 6 inches (15 cm) long. Their appearance may be a little scary at first as they can look very strong and appear to be armored, but their blue-ish grey tones are actually beautiful and match their peaceful demeanor. Vampire shrimp are especially cute when they have their front fan-like appendages out in the water current!

Your shrimp may actually change colors over time as well as after it has shed its exoskeleton. It has been observed that vampire shrimp actually get darker in color as they age and can turn almost black. This may be something to look out for if you’re planning on adding a larger vampire shrimp to your tank.

These shrimp will also turn white or a lighter blue after molting. You shouldn’t see your shrimp like this too many times as it will usually hide for a few days after molting.

If you see an exoskeleton floating in the water, don’t be alarmed. Molting will usually happen every 4-6 weeks, but you might not see the resulting shell every time.

During these times, many people mistake the exoskeleton for being the actual dead shrimp. While the dead shrimp and the exoskeleton look very similar, if your water parameters are stable and nothing has changed in the tank otherwise, it is most likely a molt.

If you are still really concerned, remove the exoskeleton with a net and observe the shell within the net. If it looks like there is still meat inside, it could be your shrimp. Vampire shrimp that have died will usually be covered in snails, too, so look out for that.

Otherwise, if it is just the exoskeleton, leave it in the tank. Your shrimp will eat it for nutrients and any remaining pieces will breakdown and reenter the water.

Vampire shrimp are relatively large shrimp and although they live on the bottom of the aquarium, they need enough space to hide and to feed. A minimum tank size of 20 gallons (75.7 L) is recommended for one vampire shrimp, with bigger always being better and additional space for more.

As filter feeders, these shrimp need access to a high water current to catch passing food particles; this also means that while your tank shouldn’t be covered in algae and fish waste, some dirt and grime will be appreciated by your fan shrimp.

A powerhead is strongly recommended to help replicate the water currents in their natural environment and to keep them fed. You can also add an air pump to increase water oxygenation. Just make sure that the powerhead isn’t so strong that it pushes your vampire shrimp off its perch!

After your shrimp sheds its exoskeleton, it will be very vulnerable and will want to stay safe by staying out of sight. There is no way to speed up this process while the new exoskeleton is hardening and your shrimp will most likely stay hidden for a couple of days.

Your fan shrimp will greatly appreciate a substrate that can’t hurt them! Gravel could possibly damage your filter feeders’ fans so sand is a much safer alternative. However, a few larger rocks will make for a perfect place to perch and catch food especially if placed by the main current!

Vampire shrimp need ‘messier’ aquariums so that they have something to feed on in the water, but that doesn’t mean that they don’t need stable water parameters. They should be kept in a tropical tank with water temperatures between 75-84° F (24-29° C). Water pH should be between 6.5-7.5 with KH between 3-10.

As always, weekly or biweekly water changes are a must with regular filter maintenance. Make sure that the parameters of the new water match those of your tank (temperature, pH, etc.) to help keep your shrimp and fish from getting stressed.

Vampire shrimp are some of the most ideal shrimp to have for an aquarium; they are large enough to hold their own, yet peaceful enough to get along with most other community fish. While they are peaceful shrimp, they do tend to be more on the shy side, so make sure not to get a lot of overly active fish that could make your vampire want to hide even more.

Many hobbyists report success keeping vampire shrimp with other vampires, as well as other filter shrimp species. Some other shrimp to consider might be bamboo shrimp, cherry shrimp, and Amano shrimp.

Some compatible fish species include tetras, platies, rasboras, and angelfish (as long as your shrimp can’t fit in the mouth of your fish they will most likely get along!).

Your shrimp will also get along with living plants! The only way they can ‘ingest’ your plant is when microscopic pieces have broken off into the water and can then be caught by their fans. Your shrimp will also definitely appreciate the added coverage and hiding spots.

Vampire shrimp are a very peaceful shrimp that can be kept with an assortment of other community fish. However, they do tend to establish a ‘home’ cave within the tank that they spend most of their days in and emerge from to feed at night.

Because of their dependency on this cave, it is highly recommended to not rearrange any decor in your tank once you have added your shrimp. Also, be careful when doing water changes that you don’t bump into the structure at all! Hobbyists have observed their shrimp becoming overstressed when they can’t seem to find their way home or if it has been altered even in the slightest way.

If you absolutely must change something in your tank, make sure to return everything back to where it was as close as you can. Still, your shrimp may be unhappy with the changes and will move somewhere else so make sure there are plenty of other spots available.

Vampire Shrimp are omnivores, which means that you will need to provide both plants- and animal-based foods for your shrimp to truly thrive. However, these filter feeders are especially known for being picky eaters, and you should always make sure that your shrimp are getting the nutrients that it needs.

One common method of feeding your shrimp is by squeezing some of the filter pad into the water flow so that food particles can be caught by their fans. Just make sure that too much detritus isn’t released back into the tank or you could cause algae to bloom and/or affect water parameters.

You can also try feeding ground-up fish, shrimp, and algae pellets or flakes. If you have other fish or invertebrates in your tank, your vampire shrimp will most likely get what it needs from the leftovers, but it doesn’t hurt to try feeding a little extra from time to time!

Vampire shrimp are filter feeders and do not ingest algae like other algae eaters. While these shrimp are omnivores, you will not see them grazing on patches of algae in your aquarium.

However, your vampire shrimp will probably contribute to maintaining algae levels on a more microscopic level. By using their fans, they are able to filter out any detritus which may have been from algae or that could cause algae.

Like Amano shrimp, vampire shrimp are very difficult to breed in an aquarium setting due to their different larval stages. In the wild, the larvae hatch in brackish water or saltwater and later need to be transferred to freshwater, making these changing water conditions very difficult to recreate in a hobby setting.

While breeding vampire shrimp is hard, it has been done. Though you will definitely need the time and patience, as well as the resources, to be able to pull it off!

If you’ve decided on vampire shrimp, Atya gabonensis, above all other freshwater shrimp species, you might have some difficulty actually finding one. They’re not too common in fish stores and those that do show up tend to go fast. If you do happen to see one in the store, make sure that its color is not too dark and that it appears to be healthy.

Otherwise, your best bet to find a vampire shrimp for sale is online; they may also be listed as viper shrimp.

Vampire shrimp don’t live up to their name, and that’s a good thing in this case! This large species of freshwater shrimp brings a beautiful dash of blue to the bottom of a community tank. With its peaceful demeanor and easy care requirements, the vampire shrimp is really a joy to watch as it filters the water searching for food.

Though not the easiest shrimp to find in the industry, the vampire shrimp is definitely worth the search!

If you have any questions about vampire shrimp care or have experience keeping or breeding vampire shrimp in your own aquarium, don’t hesitate to leave a comment below!