Ghost Shrimp Turning White? Read on To Find Out Why! 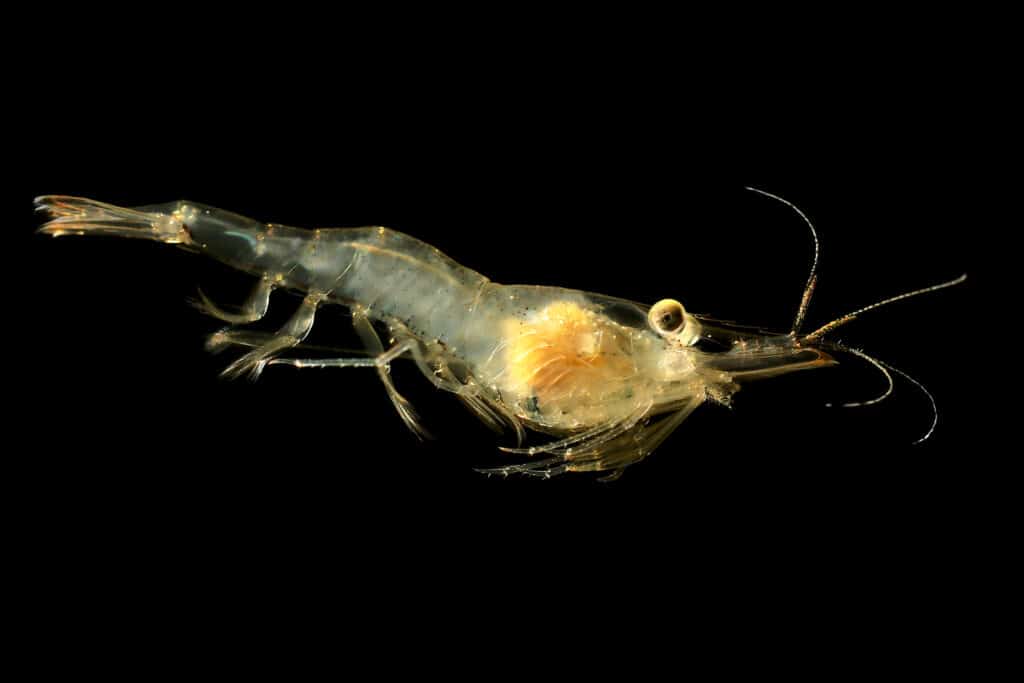 Ghost shrimp are popular additions to a peaceful community tank. These active little creatures spend much of their time foraging around their habitat, looking for scraps of food and algae to eat, providing the ideal cleanup crew for your setup.

What Are Ghost Shrimp?

Ghost shrimp are small tropical crustaceans that make a nice addition to a peaceful community tank.

Palaemonetes paludosus, to give the Ghost shrimp its scientific name, is found across the southeastern United States. In the wild, these little creatures form an important part of the food chain, providing nutrition for birds and larger fish species.

However, in captivity, the Ghost shrimp feeds on leftover fish food, some types of algae, and general detritus, making them a popular cleanup crew member for many hobbyists.

What Color Should a Ghost Shrimp Be?

Ghost shrimps are so-named because they are transparent. That’s part of the shrimp’s appeal since you can see the creature’s internal organs as it moves around the tank.

Interestingly, Ghost shrimp sometimes change color to blend in with the substrate in their habitat, appearing black or brown with patches on the body. In addition, Ghost shrimp can lose some of their transparency as they age, becoming darker in color.

Despite being hardier than many other low-grade neocardina shrimp, Ghost shrimp have a short lifespan, surviving for around one year.

Why Do Ghost Shrimp Turn White?

There are a couple of reasons why Ghost shrimp sometimes turn white.

The most common reason for your Ghost shrimp turning white is the natural process of aging.

The shrimp typically start showing signs of aging at around six months old, roughly halfway through their natural lifespan. At first, the shrimp develops white patches on its body and might even become more transparent.

By the time the shrimp reaches eight months old, it will lose its translucent body color and start turning a cloudy white hue. That process can make the shrimp appear slightly blue in color, making the creatures difficult to spot in the aquarium.

Once your shrimp start turning white, they usually have only a few weeks of life remaining.

Another reason for your Ghost shrimp to turn white is if the creature is molting.

Shrimp are invertebrates and have an exoskeleton on the outside of their bodies as protection from predators. When a shrimp molts, it leaves its tight-fitting exoskeleton so that it can start growing a larger one.

Healthy adult shrimp molt every three to four weeks. However, younger shrimp often molt more frequently than that, depending on their growth rate, sometimes shedding their skin every one or two weeks.

Maintaining consistent water quality is essential for newly-molted shrimp. Once the animal has shed its hard outer shell, it will absorb some water, growing a little bit larger, and then wait for the new exoskeleton to harden in a slightly larger size.

Molting is essential for the shrimp to breed. When a female Ghost shrimp sheds her exoskeleton, she releases a pheromone that encourages male shrimp to mate with her.

Signs That Your Ghost Shrimp Is Molting

There are a few signals to watch out for that can indicate that your Ghost shrimp is about to begin molting.

The most common pre-molting sign is that the shrimp spend much of their time inactive, sometimes not moving at all for over an hour. That’s very unusual for shrimp since these are typically pretty active creatures that spend most of their day exploring and foraging around their environment.

Often the shrimp stop eating, simply remaining motionless. At that stage, you might think you’re looking at a dead Ghost shrimp. However, if you look closely, you’ll see the shrimp’s antennae moving very slightly.

If you observe a large number of your Ghost shrimp sitting motionless on the substrate, it’s unlikely that they are all molting at the same time. In those circumstances, it’s more likely that there are problems with the water quality in your aquarium.

However, it’s not unheard of for a few shrimp to molt simultaneously. So, don’t worry too much if your water quality is correct and several Ghost shrimp display the typical pre-molting behaviors described above.

Once the shrimp have molted, their bodies are very soft and extremely vulnerable to damage and attack by predators. So, immediately after molting, the Ghost shrimp usually hide away for several days. During that time, don’t be surprised if you don’t see your shrimp.

It’s generally possible to predict your shrimp’s molting by their behavior. However, if a shrimp is very lethargic or slow and hangs around in the open rather than hiding away, it could be either sick or about to pass away.

Unfortunately, there’s not much you can do for diseases among Ghost shrimp. We recommend that you isolate the shrimp to prevent any bacterial infections or parasites from spreading throughout your community. That could easily happen if a predatory fish or invert eats the infected shrimp after it dies.

So, if you notice that several of your Ghost shrimp have turned white, it’s a good idea to remove them and keep them in a quarantine tank under observation. We also recommend that you carry out a partial water change as soon as you have removed the sick Ghost shrimp.

Adult Ghost shrimp have certain water parameters that they need to remain healthy and thriving.

The ideal aquarium for a single Ghost shrimp will be between 5 and 10 gallons. If you want to keep a larger number of shrimp, you’ll need a bigger tank.

The tank should contain lots of dense plants where the shrimp can hide and feed. The water temperature should be 65 to 77 F, with pH levels between 6.5 and 7.5, and water hardness of 5 to 12 dKH and 5 to 10 dGH.

Ghost shrimp are pretty hardy creatures, but they are sensitive to even slight water changes. So, you should check the water quality and parameters in the tank on a weekly basis.

Muscular necrosis is a common form of sickness that affects all varieties of shrimp, including Palaemonetes paludosus.

You can tell if a shrimp has muscular necrosis because the creature develops white spots or whole white areas around the shrimp’s tail or abdomen. This health condition occurs for several reasons, including changes in the water pH and a lack of nutrients in the water.

Other causes of muscular necrosis are rapid water temperature changes or poor levels of dissolved oxygen in the water.

Muscular necrosis is infectious, and the disease can affect all your shrimp if it’s not successfully dealt with. Place all affected shrimp in a quarantine tank away from the rest of your livestock. You can’t treat this disease, although it can sometimes be resolved through carrying out daily partial water changes of at least 10% of the tank water.

Copper is highly toxic to many invertebrates, including Ghost shrimp. A small amount of copper is necessary for the shrimp as part of their respiratory process. However, in large amounts, copper will cause your shrimp to turn white and ultimately kill them.

Be vigilant when using any fish medication as many drugs contain copper.

There is a small chance that your Ghost shrimp are turning white due to organ failure.

In that case, there’s nothing you can do for your sick shrimp.

Can You Prevent White Patches on Ghost Shrimp?

Unfortunately, you can’t stop your shrimp from turning white due to old age.

However, you can help the shrimp retain their usual color while they are molting.

How To Encourage Molting

If your Ghost shrimp are to remain healthy and survive, it’s essential that they go through the molting cycle regularly.

If the shrimp don’t molt, they will outgrow their exoskeleton and die prematurely. However, sometimes the molting progress doesn’t happen, usually because the water hardness is too low or too high.

Provide the shrimp with a boiled cuttlebone that you’ll find in your local pet store in the bird section. That helps to boost the additional calcium that the shrimp need in their diet.

Shrimp calcium powder and crushed eggshells added to the water column can also help to supplement the shrimp. When the shrimp molt, don’t remove their shed exoskeletons from the aquarium, as that can provide a valuable source of calcium for the shrimp, too.

That additional calcium helps encourage the molting process and prevents fragments of the shell from adhering to the shrimp as it molts.

In addition, some experienced shrimp hobbyists recommend grating cuttlebone powder onto the water’s surface. The shrimp can then extract the calcium they need from the water surface, just as they do when ingesting biofilm.

Did you enjoy our guide on why your Ghost shrimp might be turning white? If you found the article helpful, please share it!

Ghost shrimp most commonly turn white as they approach the end of their lives, typically from the age of around six months. However, the shrimp can also change color through a natural process, because of poor or unsuitable water parameters, and when molting.

Certain diseases and health issues can also affect your Ghost shrimp and cause them to turn white.

Do you keep Ghost shrimp? Did your shrimp turn white? Tell us about your community tank in the comments box below.