Are Guppies Hardy? (Their Health & Environment) 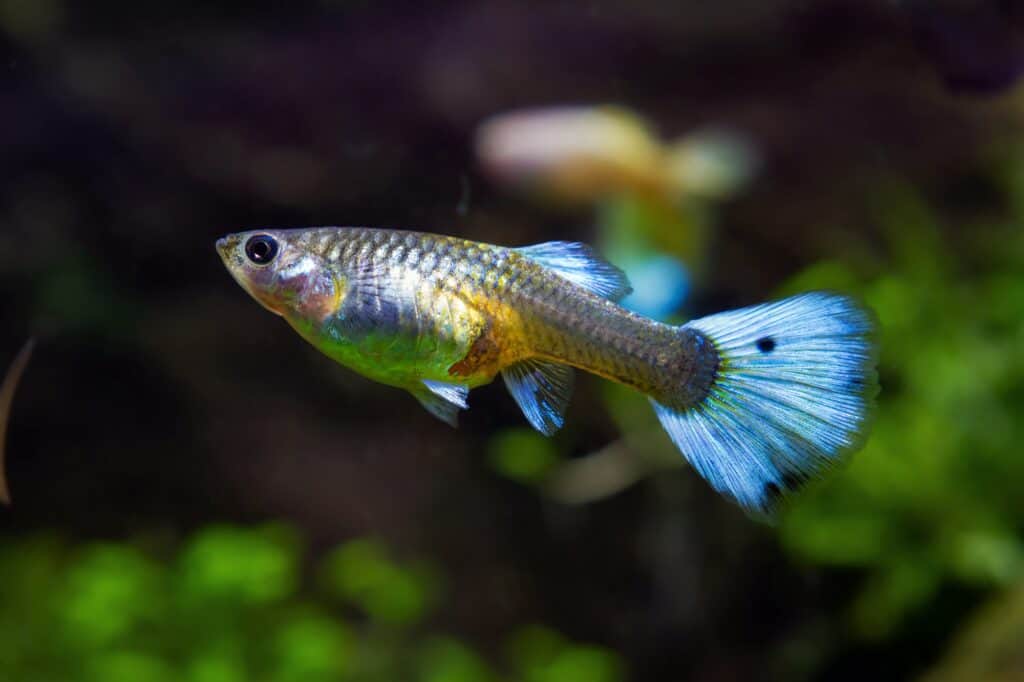 Guppies are known to be among the more robust freshwater aquarium fish. Not only are they tolerant of a wide range of water conditions, but they’re also forgiving when it comes to temperature, feeding regime, and tankmates.

However, there’s a big difference between a guppy surviving and a guppy fulfilling its optimal health, appearance, and lifespan. Here we’ll take a closer look at how you can help your guppies not only survive, but thrive for years to come.

Guppies have a hardy nature that tends to be very forgiving when it comes to their upkeep. They can tolerate a wider range of water parameters and temperatures than other tropical fish. As well, they can put up with less-than-perfect water quality and feeding.

In a community tank, guppies are also quite a peaceful species that are good at staying out of trouble, which is a big boon for helping them to stay alive.

Of course, guppies certainly aren’t invincible. Many people have blamed modern breeding for producing guppies that aren’t as tough as they used to be.

Also, just like other fish, they have their limits when it comes to the range of conditions and the quality of care they’re provided.

In the wild, guppies can live for up to 5 years of age. While there are some reports that guppies have also reached this age in captivity, a more typical life expectancy for an aquarium guppy is 2-3 years.

One report from Dr. Eugene Larr in 1972 suggests that the secret to long-lived guppies lies in the water temperature. While guppies raised at 80 Fahrenheit may develop quickly, they’ll likely die within two years.

However, specimens kept at the lower end of their preferred range (around 74 Fahrenheit) will often exceed 4 years of age.

Temperature is just one of the many factors that can have a big impact on the health and lifespan of a pet guppy, which we’ll explore further.

The Best Conditions to Keep Your Guppies Healthy and Happy

Give Your Guppies a Large Enough Tank

As with any other aquarium fish, guppies need a large enough tank to keep them happy. A 5-gallon tank would barely give you enough space for 3 guppies, and since guppies need to be kept in groups of at least 3 individuals, an aquarium of at least 10 gallons is much better.

Larger tanks can be much easier to maintain stable water conditions and will allow your guppies more space to stake out their own territories and hiding places.

Guppies are fairly laid back when it comes to water chemistry, but they’ll be at optimum health between pH 6.8-7.8. If your water is more acidic than this, you could consider using a substrate that includes limestone to raise your water’s pH.

You may be surprised to learn that in the wild, guppies come from brackish waters, and some guppy keepers like to add a little aquarium salt to the water, believing it will help their fish’s health.

A scientific study from Sri Lanka in 2019 revealed that guppies can generally tolerate salinity levels up to 28ppt and even up to 38ppt if the concentration is increased gradually.

Use an Aquarium Heater for Stable Water Temperatures

Guppies can withstand water temperatures for short periods between 55-100 Fahrenheit – a range far greater than most other fish species could tolerate. That’s why some people also keep guppies in outdoor ponds!

While some people do keep guppies in unheated, cold water aquariums, conditions below 68 Fahrenheit are not ideal water temperatures for guppy health and well-being.

Guppies prefer a temperature range between 71-80 Fahrenheit – a range that’s compatible with most other aquarium fish. Use a reliable aquarium heater and thermometer to ensure temperatures are kept within the optimum range.

Use a Biological Filter and Keep the Tank Clean

Guppies produce a fairly high bio-load for such a small fish. Although some people have kept them in fish bowls without a filter, this is certainly not a practical or responsible way to keep guppies.

Without a biological filter, ammonia levels will build up in the tank and your guppies could easily be permanently damaged or die from ammonia poisoning.

As well as maintaining a reliable aquarium filter, it’s essential to perform regular tank maintenance such as vacuuming, partial water changes, and universal water tests to ensure the well-being of your fish.

Feed Your Guppies a Varied But Moderate Diet

Guppies can survive purely on dried fish foods such as flake foods or fish pellets – but they won’t thrive on them.

Guppies are omnivorous, meaning that as well as these meaty treats, they will enjoy nibbling on some plant material, too.

Keeping live plants in the aquarium is an excellent way to provide vegetable sustenance for your guppies, while also improving water quality and oxygen levels.

Some of the most common health problems in guppies are caused by overfeeding. An overfed guppy fish is likely to develop bloating, constipation, obesity, and even swim bladder disorder – especially with commercial fish foods.

One of the very best steps you can take to ensure good health in your guppies is tolimit their feeding to no more than they can eat in two minutes, once or twice per day.

Decorate Your Tank With Plants and Hiding Places

Not only do aquarium plants give your guppies something to eat and help regulate the water chemistry, but they also offer a refuge for them when they’re feeling vulnerable, sleepy, or in need of escaping an aggressive tank mate.

A guppy tank with plenty of live plants and some rocks and caves for your fish to hide among will help your hardy fish feel relaxed and safe, which is one of the keys to lower stress levels, long life, and well-being.

As with any other fish, it’s important to keep a close eye on your guppy’s health – you need to be checking them closely every day for potential maladies.

If you do spot anything unusual in your fish, it’s essential that you act fast to rectify the problem before it’s too late.

Common diseases in guppies include velvet parasites, white spot disease, and digestive disorders. All of these can be easily remedied if you respond promptly.

However, if you fail to recognize the symptoms of a sick fish and don’t act fast enough, your guppies could die needlessly.

Keep Your Guppies in Groups

Guppies aren’t exactly schooling fish, but they don’t like to be kept alone either. A lone guppy may experience increased levels of stress and be more vulnerable to diseases than those kept in groups.

To maintain their health, always keep guppies in groups of 3 or more. All-male and all-female groups of guppies are possible.

However, you should note that all-male groups can become rather aggressive toward one another if they’re deprived of the opportunity to mate.

You can also keep them in mixed groups, but it’s vital to provide enough females for each male to prevent harassment and aggression between your fish. Many guppy experts advise you keep at least 3 females for every male.

Just remember that mixed groups of guppies will likely breed and their numbers can get out of hand very quickly.

Give Your Guppies Compatible Tankmates

Guppies are fairly peaceful fish that are also quite active and good at steering clear of more aggressive fish.

However, you must bear in mind that they’re still nano fish with long fins that can be nipped or torn by other fish species.

As well, larger fish like red-tailed black sharks and angelfish may also predate guppies that are weakened or vulnerable.

Buy Your Guppies From Experienced Breeders

There has been a lot of talk in recent years about the declining quality of guppy genetics. Guppies breed so readily that much of the time breeding occurs accidentally.

Consequently, hobbyists and pet stores find themselves with much extra fish that they need to find homes for. Without a proper, planned breeding program, guppy genetics can become weak and inbred.

Pet store guppies are notoriously unreliable and may have weaker immune systems and a shorter lifespan than those raised in professional breeding programs.

Why Are My Guppies Suddenly Dying?

If your guppies are dying unexpectedly, health issues caused by poor water conditions or toxic substances are the most likely cause.

Even small amounts of ammonia can be very dangerous for aquarium fish, as can nitrites, soap residues, chlorine, and other toxic substances.

If you see a sick or dead fish without any apparent cause, do a full water test as soon as you can.

If ammonia, nitrite, nitrate, or dissolved oxygen levels are outside of the safe range, you can rectify the situation temporarily by performing a 30-50% partial water change.

You must then work quickly to treat the underlying cause of the problem to prevent sudden deaths from recurring.

Guppies are one of the easiest to keep of all aquarium fish, but there are several other species that are also very forgiving.

Zebra danios, white cloud mountain minnows, platies, mollies, swordtails, and harlequin rasboras are other species of fish that are tolerant of a wide range of conditions and are eminently suitable for beginners.

Are Guppies Good for Beginners?

Guppies are great fish for beginners because they are generally peaceful, friendly, and hardy fish. Their diverse, beautiful shapes and colors will be sure to keep you interested, and they are also incredibly easy to breed.

It must be said, though, that the ease of breeding guppies is a double-edged sword. That’s because it’s also not so easy to stop guppies breeding!

While it can be an enthralling experience as a novice fishkeeper to rear your own fry, you’ll also need to find a way to manage all those extra little fish when they’re born.

If you’re ready to set up an extra breeding tank and find homes for the new generation of guppies when they grow up, then this can be a rewarding next step in your fishkeeping journey.

On the other hand, if you let your guppies breed in your community tank, they’ll likely be eaten by not only other species of fish but also their own parents! Yes, guppies are cannibals – just be ready!

Guppies are a beautiful, hardy fish species that are tolerant of a wide range of conditions compared to many other types of fish.

Even so, you’ll still need to work hard at keeping water conditions healthy and stable for them to thrive. Equally important is choosing the right tank mates and making sure your guppies are fit and healthy on a daily basis.

Guppies are a good beginner’s fish, but it’s important to think ahead about the breeding potential of this prolific livebearer if you want to keep a mixed group of them.