Demystifying Glofish Angelfish: Can They Live Together? 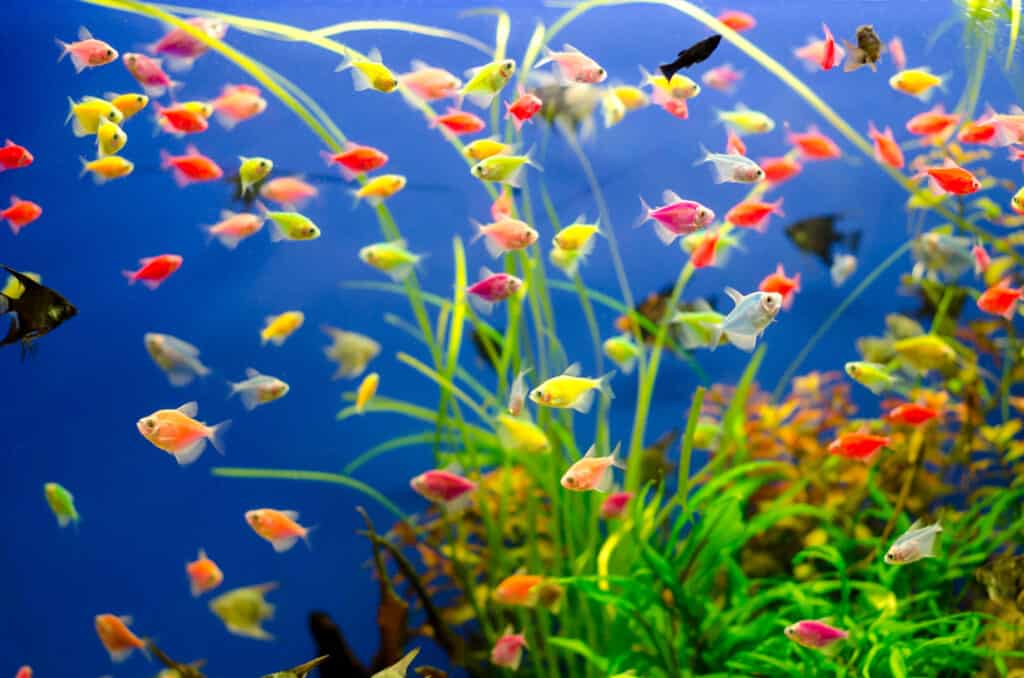 If you’re interested in creating a stunning tropical freshwater community fish tank, you may currently be looking for ideas of what fish you can house together.

One very common choice in any freshwater tank is the beautiful Angelfish, one of my favorites; angelfish are a stunningly unique cichlid and make a fascinating addition to any home aquarium.

Choosing a fish to pair with this can be a challenge, and many people often opt for something equally as flashy – well, if that sounds like you, then look no further than the Glofish!

In this article, we discuss which Glofish makes good tankmates for Angelfish and which radiant flashy friends shouldn’t be found anywhere near them!

Read on to discover how to fill your tank with plenty of colorful, flashy friends!

What Is a Glofish?

Glofish are an exciting new type of aquarium fish, becoming popular in recent years due to their vibrant flashy colors. Colors that are, sadly, not naturally occurring.

Yep, you read that right! These fish have been genetically engineered to have a fluorescent coloration, and you can get various types of fish in various color forms.

They’re stunning to keep as display pets and can bring life and vibrance to any tropical freshwater tank setup.

Glofish can be found in the following colors:

And, get this! It’s almost like a customize-your-own neon-fish mix-and-match extravaganza! These various Glofish colors can all be found in the following fish species:

What Is an Angelfish?

Angelfish are a freshwater species of Cichlid, native to the various river systems throughout Brazil, Columbia, French Guinea, Guyana, and Peru, including the Amazon, the Rio Essequibo, and the Rio Oyapock.

They can reach up to 6 inches in length and 8 inches in height, making them relatively large. There are different species of angelfish, including flowy angelfish.

They have a compressed body structure, so they’re very thin and come in a wide variety of beautiful colors, ranging from solid silver to colored stripes or the common silver and black marbled color.

They’re a typically peaceful species but may not get along particularly well with very small fish. The tetra with angelfish is common in pristine water.

Typically, they prefer to be housed with their own kind and can live up to around 10 years or even more!

However, they have specific water requirements as wrong water parameters, such as foul water, interfere with their good health.

Can Glofish Danios Live With Angelfish?

Glofish Danios, also known as Zebrafish or Zebra Danios, are hardy little guys. Although they have preferences for the water parameters they like to live in, they don’t mind compromising a little within that range, making them ideal tankmates for many species, including the Angelfish.

If you plan on housing Danios with Angelfish, you should ensure to meet the following conditions to keep all members of your Tank happy:

Due to the Angelfish preferring water temperatures that are on the higher end, many keepers recommend not putting these two species together.

As I mentioned, the Danios can be hardy, and so long as the temperature is within their preferred range, they’ll get along swimmingly!

Nope, keeping Tiger Barbs with Angelfish is bad, as these guys are notorious for their fin-nipping behavior.

This inherent behavior is also common amongst different types of Gourami, including pleco Gouramis and Dwarf Gouramis.

They’re both territorial fish, and a Tiger Barb will usually come out victorious if they end up in a fight. I mean, let’s face it – what sounds scarier? A tiger or an Angel? Yep…

That’s what I thought, and just like your little angelfish, I wouldn’t want to be on the receiving end of a tiger attack either!

Whilst attacks can be more severe, fin nipping isn’t deadly, but it can cause your Angelfish to become stressed and unhappy. After all – you likely wouldn’t want a new housemate moving in that was prone to biting you!

Again, the clue is in the name here – I can say for certain that I wouldn’t like to be on the receiving end of a Glofish Shark attack either.

Can Serpae Tetras Live With Angelfish?

Another nasty fin-nipper, Serpae Tetras, is generally quite a peaceful fish. Still, just like Tiger Barbs and Rainbow Sharks, they’re often drawn to the long floaty fins of the Angelfish, and sometimes they just can’t quite help themselves.

Tetras cannot live in the same tank as angelfish. The poor angelfish, especially female angelfish, would suffer due to the remorseless fin nippers!

The chances of Serpae Tetras actually attacking Angelfish, though, depends on the tank’s conditions, the fish’s temperament, and various other factors, including stress levels, diet, tank parameters, and so forth.

Can Neon Tetras Live With Angelfish?

Yes! Whilst many believe that Angelfish and Neon Glo fish Tetras cannot be housed together due to the small size of the Tetras, they actually get along quite well.

Just be sure that none of them will ‘accidentally’ end up in the Angelfish’s mouth, so be sure to get fish of appropriate sizes if housing them in the same tank.

If planning on housing these two fish together, you’ll want to ensure that the tank is big enough for them both to have their own space and offer both species plenty of places to hide and retreat if they feel threatened.

Can Cardinal Tetras Live With Angelfish?

Cardinal Tetras and Angelfish alike are both beautiful fish and make for a stunning display in any home aquarium if housed together. Cardinals are a great addition to an Angelfish community tank.

If housed with other non-aggressive tank mates such as Rasboras and Danios, they can be part of a truly stunning and diverse setup.

Whilst glofish, all seem super unique and fun to own. It’s crucial to remember that despite them all being glofish, they should still be treated with the care and conditions needed by their own particular breed.

And no matter who you choose to house your angelfish with, they make for a stunning tankmate, making your setup dazzling and fun!