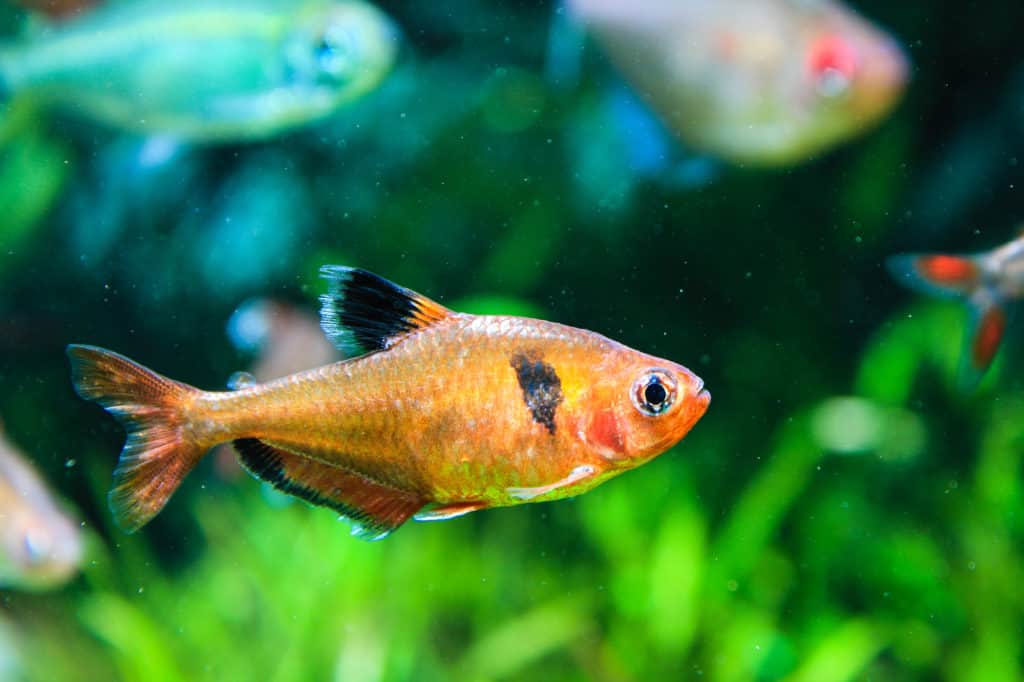 The Serpae tetra is a brightly colored, attractive tropical freshwater fish that’s a favorite with many aquarists. These fish are very easy to care for, making them a great choice for the beginner who wants a small, long-lived fish that’s hardy, tolerant of a range of water conditions, and easy to breed.

In this article, we tell you everything that you need to know about the sparkling Serpae tetra and explain just what it needs to thrive in the aquarium.

The Serpae tetra has the scientific name, Hyphessobrycon eques, and belongs to the Characidae family of fishes. These flashy little fish are also known by many other common names, including:

Serpae tetras are part of a group that’s commonly known as the Blood tetras, so-called because of their red coloration. There’s much debate within the scientific community about this group of fish because of the similarity of some of its members. For example, Serpae tetras are extremely similar to  Hyphessobrycon swegles, and they are also known as the Red Phantom tetra, although the two are not identical.

This tropical freshwater species inhabits in the stagnant, densely-planted waters of small lakes, ponds, and tributaries. The tetras primarily live in the upper part of the water column, feeding on worms, plant matter, insects, and small crustaceans. Also, schools of the fish are seen to gather around submerged tree roots and dense vegetation.

The species is not regarded as endangered in the wild, and the specimens that you’ll find for sale in fish stores are mainly captive-bred.

Captive-bred Serpae tetra Hyphessobrycon generally has a lifespan of between five and seven years, although some hobbyists have reported fish that have survived for ten years or more.

Serpae tetras are deep-bodied fishes with the usual tetra shape. The body is long, flat, and oval-shaped, and the fish reaches an average length of around 1.5 inches at maturity.

Something to watch out for when purchasing the Callistus tetra are fishes that appear faded in color, which is a sign of aging in this species and is especially noticeable in the black mark behind the gills.

If you want to breed your fish, you should aim to buy a mixture of males and females. Female tetras are generally fatter and less brightly colored than males.

Most tetra varieties are renowned for being easy to keep, and the Serpae tetra is no exception to that. Here’s the lowdown on how to care for your Blood tetras.

The best way to help your new fish settle into their new home is by providing a habitat that closely replicates that of the animals’ wild environment.

So, in the case of the Red tetra, you should try to create an Amazon habitat. The water flow in the aquarium should be minimal, and you should include bogwood, driftwood, and leaf litter in your tank décor scheme. Dense planting around the perimeter of the tank is good, and a dark-colored, sandy substrate will help to make the fishes’ colors really pop.

You can use peat or blackwater extract to create the soft, acidic water that the fish prefer, and a few handfuls of dried leaves scattered across the bottom of the tank can help to recreate the river environment that the fish are used to.

The Jewel tetra is a very active little fish, so you must allow plenty of open-water swimming space amid the planting and other decorations.

The ideal aquarium size for a group of six Red tetras is around 20 gallons. As a general rule, you should add another gallon of water per extra inch of fish.

Lighting within the aquarium should be on the dim side, as the fish’s natural habitat is forested and dark. Consequently, Red tetras are comfortable spendig much of their time around the surface, and you can encourage that behavior by providing plenty of floating aquatic plants.

Serpae tetras can be sensitive to poor water quality, so you’ll need to use a high-quality filtration system that doesn’t create too much flow, as the species prefers sluggish water.

The water temperature should be between 72o to 82o with a pH in the range of 5.5 to 7.5 and hardness between 5 and 20 dGH. These tetras are a freshwater species and cannot tolerate a brackish environment.

The Serpae tetra is easy to care for, although you must keep the water clean. Decomposing organic matter causes the levels of harmful nitrates and phosphates to increase, and water evaporation can impact on the water hardness. For that reason, you’ll need to carry out 25% to 50% water changes every other week.

In nature, Serpae tetras eat worms, insects, plant matter, and small invertebrates. Tank-kept tetras will accept pretty much any foods, including flakes, pellets, frozen, freeze-dried, and fresh foods. A balanced and varied diet will help to bring out the fishes’ colors and keep them in good general health.

These omnivorous fish enjoy several small feedings every day. Offer the fish only as much as they will eat in a few minutes.

Although the Serpae tetra is widely regarded as a peaceful species and does best when kept in schools of at least six individuals, they do have a reputation for fin nipping. That aggressive behavior is almost always directed at fellow shoal members and usually happens during feeding times.

The ideal tankmates for the Jewel tetra include other active fish species that are larger or of a similar size to the Serpae, including:

Fish species that should be avoided as tankmates for the Serpae tetra include slow-moving species, such as Angelfish and those with long, flowing finnage. For example, betta fish can be harassed by Jewel tetras and might sustain fin damage as a result of nipping.

A good way to discourage aggressive behavior is to place the tetras’ food at multiple locations in the tank during feeding time. You could also try using several feeding rings, which might help to prevent the problem.

If you fancy taking on a relatively simple project, you might want to breed from your Serpae tetras. The species is pretty easy to breed in the aquarium environment, provided that you create the correct spawning habitat.

Start by buying a group of at least six individuals with equal numbers of female and male fish, and set up a dedicated breeding tank.

The breeding tank should be small with very dim lighting, dark-colored substrate, and plenty of fine-leaved plants, such as Myriophyllum or Java moss.

The water in the tank should be in a very soft range between 6.0 and 8.0 dGH with a pH level of 6.0 or thereabouts. The best form of filtration for the breeding tank is an air-driven sponge system with a very low flow. The water temperature needs to be around 80o Fahrenheit.

You’ll need to bring your fish into spawning condition by feeding a high-quality diet that includes plenty of live foods.

When in prime breeding condition, female fish will be noticeably plumper, and males will become much more brightly colored. When you have a pair of fish in spawning condition, transfer them to your breeding tank.

The female will lay her fertilized eggs over the spawning mop or plants, usually early in the morning. As soon as the eggs have been laid, you must remove both the adults to prevent them from eating the eggs and fry. In each spawning, 200 to 300 eggs are released.

The eggs are highly sensitive to light, so once the parent fish have been removed, switch off all the tank lighting. Hatching usually happens within a day or two. For the first few days, the fry will feed on their yolk sac. When the fry is free-swimming, you will need to feed them on freshly hatched baby brine shrimp and infusoria. If you don’t have brine shrimp, commercially-prepared fry food or finely crushed flakes will do fine.

This species of tetra is a very hardy species that doesn’t generally suffer from any specific diseases. That said, these fish can become stressed very easily if the water quality in the aquarium is poor. Stress lowers the animal’s autoimmune system, making the fish more susceptible to common fish diseases, such as Ich, skin flukes, and bacterial infections.

Ich is just about the most common disease that affects freshwater tropical and coldwater fish. Ich is caused by the parasite, Ichthyophthirius multifiliis, a protozoan that is usually present in most aquariums.

Ich doesn’t attack healthy fish. However, any animals that are weakened by stress or disease are vulnerable. Poor water conditions are commonly to blame for outbreaks of White Spot disease in tetras.

Affected specimens will rub or flick their bodies against the substrate and tank decorations as a response to the skin irritation caused by the parasite. A rash of tiny white spots appears on the fish’s body, including the head, fins, and gills, and the fish may have clamped fins, rapid breathing, and lethargy.

If the condition isn’t treated promptly, the parasites can clog the fish’s gills, ultimately causing suffocation and death.

Ich is easily treated by using over-the-counter products that you add to the aquarium and raising the water temperature to 82o.

When introducing anything new to your aquarium, including tank decorations, plants, and substrate, be sure to wash the items thoroughly first to remove debris and parasites. All new fish should be placed in a quarantine tank for two weeks before adding them to your main display tank. That enables you to watch out for signs of disease and treat it accordingly, rather than exposing your whole collection to a potential problem.

You can generally buy the Serpae tetra in most fish stores and online from dealers for a few dollars per fish. Often, if you buy a group of specimens, the price is lower. The long-finned variant may also be found, and it is usually advertised as the Long Fin Red Minor tetra or Long Finned Serpae tetra.

In this section of our comprehensive guide to caring for these beautiful fish, we answer a few of the questions that are most commonly asked by people who may be considering adding the Serpae tetra Hyphessobrycon eques to their collection.

A: No. These tetras are basically very peaceable, although they can be feisty with their own kind, especially during feeding times when fin nipping can be a problem.

Q: How big do Serpae Tetras get?

A: These fish grow to measure around 1.5 inches in length.

Q: Will Serpae Tetra school with other tetras?

A: By nature, the Hyphessobrycon eques is a shoaling species that will mix with fish of their own species and also with fish of a similar size.

The Serpae tetra is a peaceful, schooling species that makes a bright, colorful addition to any community tank. These fish are ideal for beginner aquarists, being very easy to care for. That said, these fish do demand correct and stable water conditions and a balanced, varied diet to remain in good health and reach their full lifespan.

You can keep a species-specific aquarium or choose some suitable tankmates that will get along well with these generally peaceful fish. If you fancy undertaking a fun project, you might want to try breeding from your Jewel tetras.