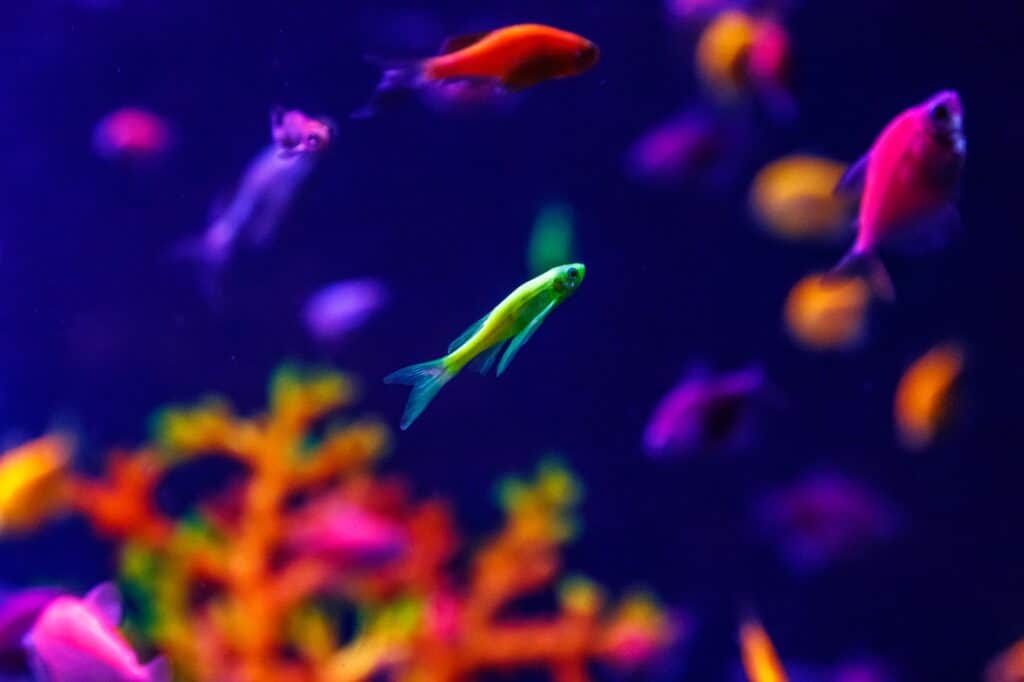 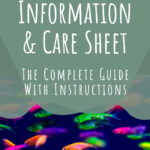 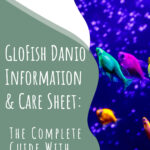 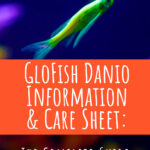 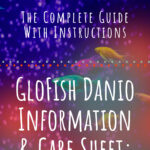 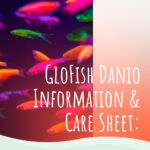 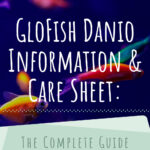 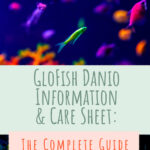 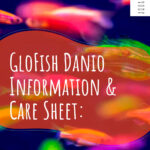 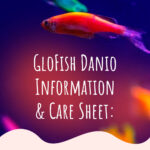 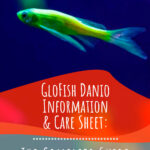 GloFish® danios are not artificially dyed or cruelly injected with colors. Instead, these fish are the result of genetic testing that has led to their bright fluorescent color assortment. If you plan on getting one of these fish, it’s important to know how to properly take care of it as their attractive colors have often led to too many impulsive buys.

Keep reading to find out everything you need to know about GloFish danios, why they’re fluorescent, and how to care for a school of them in your own freshwater aquarium!

You’ve probably seen these fish before in your local pet store as they’re very hard to miss due to their captivating fluorescent colors; this fluorescence is the result of an electromagnetic wavelength being temporarily absorbed and then being released at a lower energy level, resulting in a different color.

Usually, these fish will be a common freshwater species, like tetras, barb, or danios, except they’re a different color; these fish are part of the trademarked GloFish market.

How are GloFish danios different from zebra danios?

GloFish offers a variety of freshwater fish species that have been genetically modified to display fluorescent colors. Contrary to popular belief, these colors are not the result of dye injections and are passed down through genetics.

In the scientific field, Danio rerio is considered one of the top model organisms for research. Along the way, scientists injected a green fluorescent protein (GFP) into a zebra danio embryo with hopes that fluorescence would indicate toxins and pollutants in the immediate environment; this GFP was originally extracted from a species of jellyfish, most often Aequorea victoria.

As genetically modified organisms were studied more and were understood better, other genes were extracted and added to the zebra danio, including those from a sea coral that led to red fluorescence and other orange and yellow variations from other jellyfish genes.

GloFish has adopted these colors and created Starfire Red®, Electric Green®, Sunburst Orange®, Cosmic Blue®, Galactic Purple®, and Moonrise Pink® variations that can be found across danios, tetras, betta fish, and more. Unlike fish that have been artificially dyed, these fish are the offspring of genetically modified adults, so the color is inherited and does not fade with time.

There is still some discussion in the aquarium hobby about whether or not GloFish should be kept, but it is reassuring to know that the fish have not been subjected to inhumane practices. If planning on getting an aquarium full of these fish, then it’s important to know how to take care of them properly.

For the most part, any species of GloFish needs the same level of care as their regular-colored counterparts. The most important thing to consider when getting a GloFish danio though is that these fish come from coldwater environments and they will need a lower temperature than most community freshwater fish.

The zebra danio is a schooling fish that has high activity levels in the aquarium. This means that it’s best to keep them in as large of a tank as possible, though a 10-gallon (37.9 L) aquarium will comfortably keep a school of six; for every additional fish added past this, a larger tank size is required.

Because of their high activity levels, these fish need lots of open water to swim and exhibit their natural schooling behaviors. For the most part, these fish tend to stick towards the upper and middle portions of the water column. They will appreciate natural foliage in the form of live plants and a gravel or sand substrate; most GloFish hobbyists like to keep their fish on a dark substrate and under special LED lighting designed to showcase their fluorescence best.

The zebra danio can be found in many countries throughout South Asia, including Pakistan, Nepal, and Bhutan; they are especially abundant in the Ganges and Brahmaputra River basins. These regions are often cooler than tropical conditions, making both the zebra danio and the GloFish danio a coldwater species.

In the aquarium, it’s usually best to keep the water temperature between 68-72° F (20.0-22.2° C) with a relatively neutral pH between 6.5-8.0. However, because of the intense breeding and adaptations made by the aquarium hobby, these fish can usually withstand more tropical conditions; it is best to ask the store the temperature of the tank they are being kept in to help reduce shock.

Otherwise, these fish need stable water conditions, with 0 ppm ammonia, 0 ppm nitrites, and maintained nitrate levels; a filter is needed, though a heater may not be necessary given the climate of the place they’re being kept. In general, even if keeping a coldwater species, it is best to use an aquarium heater to keep the temperature stable, even if you’re not using it to heat up the water.

As long as you have an appropriate number of danios, then you can safely put a good amount of coldwater species with them. However, it’s important to match the active behavior of these fish with other fish in order to keep stress levels from rising in the tank; because of this, it’s best to avoid slow-moving and more docile fish. There is also a chance that fish with longer fins may be nipped at occasionally, so it’s generally best to avoid those species as well.

GloFish danios are not picky eaters, though you want to make sure to feed a variety of foods that keep their red, orange, yellow, green, blue, and purple colors the brightest that they can possibly be. In the wild, these zebra danios are omnivores, which means that they eat both animal- and plant-based foods.

In the aquarium, it’s best to also have a variety of live, frozen, and freeze-dried food available to keep your fish interested and eating healthy. A high-quality fish food, like flakes or pellets, should be the main staple of the diet. Other treats, like bloodworms, brine shrimp, or mosquito larvae may be offered every now and then.

Here are some questions you should consider about these genetically modified fish before going out and getting one for your own freshwater tank!

How big do GloFish danios get?

GloFish danios get as big as regular Danio rerio and reach adult size around 2-3 inches (5.1-7.6 cm). While they are relatively small fish, it’s important to consider that they need to be kept in a sizeable school of at least six or more and a larger tank will still be needed.

How long do GloFish danios live?

Unfortunately, GloFish danios don’t live too long. On average, they live between 2-3 years, with 5 years being the extreme. However, it is not believed that genetic engineering has had an effect on the lifespan of these fish as regular Danio rerio only live a couple of years as well, even given perfect tank and water conditions.

How many GloFish danios should be kept together?

Like Danio rerio, GloFish danios like to school together and become much more active in larger numbers. In general, it’s best to keep at least six or more GloFish danios together in order to increase activity level as well as to deter aggression.

While both GloFish danios and zebra danios are community fish, they tend to be more aggressive among themselves when kept in smaller numbers. This is most like a pecking order, where the weakest and smallest fish gets left behind.

These fish might also be more aggressive if kept in a smaller tank where there is not enough room to freely school.

Can you breed GloFish?

No, you cannot intentionally or commercially breed GloFish. Because GloFish is a patented and trademarked brand, breeding these fish is prohibited.

However, breeding zerba danios is relatively easy otherwise and may even happen on its own in your tank without any intervention. For more information about breeding zebra danios, make sure to check out our full Dani rerio care sheet here.

GloFish danios, tetras, and barbs might seem like the byproduct of something unnatural, but actually, they’re not very much different from their regular-colored counterparts at all; however, some aquarium hobbyists do not support the commercialization of these fish regardless.

In fact, these GloFish danios require the same diet, water parameters, and tank maintenance as usual, though their coldwater demands need to be taken into consideration. It is also important to note that GloFish danios, tetras, barbs, and all other official GloFish species cannot be intentionally bred or sold within the aquarium setting.

If you have any questions about GloFish, zebra danios, or have had experience keeping any other variations of these fish, don’t hesitate to leave a comment below!