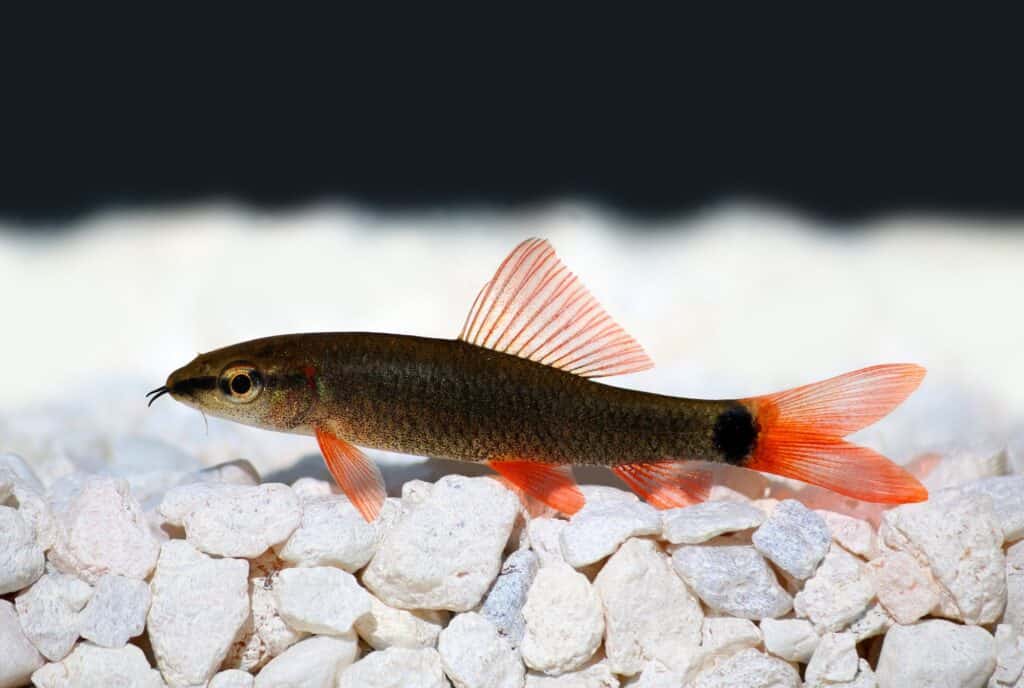 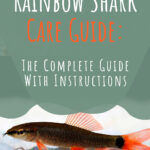 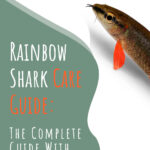 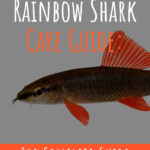 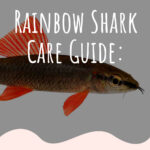 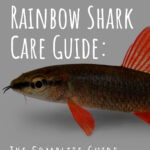 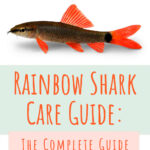 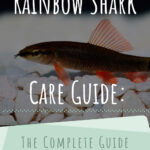 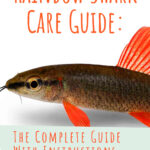 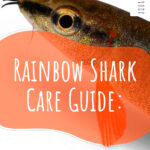 The rainbow shark’s appearance is far from the colorful array that you might expect from its name, but these fish make a fascinating addition to the freshwater aquarium nevertheless. This species is commonly confused with other similar-looking fish but is easily identified if you know what to look for! Otherwise, a single rainbow shark can fill out the bottom of most freshwater semi-aggressive aquarium setups.

Keep reading to find out everything you need to know about the rainbow shark, how to identify one, and if this species is right for your aquarium!

Epalzeorhynchos frenatum goes by many common names and sometimes the wrong name altogether. These fish are known as the ruby shark, red-finned shark, red-fin shark, and most often, the rainbow shark.

As we’ll discuss later, the rainbow shark is commonly misidentified as the red tail shark (Epalzeorhynchos bicolor). Both of these fish belong to the same genus, which contains most freshwater ‘sharks’; this name is given due to the similarity between their body shape and marine sharks, especially with the iconic tall dorsal fin.

The rainbow shark has largely been documented in and around the Mae Klong, Chao Phraya, and Mekong River basins throughout Thailand, Cambodia, Laos, and even Vietnam. In these warm waters, they stay towards the substrate, foraging on the sand and in between rocks.

The exact range and population count of the rainbow shark remains a mystery; dams and other manufactured water systems have interrupted the natural flow and ecosystems of these once pristine rivers. Secondary pollution and harvesting have also seemed to have an effect, though the exact consequences have not yet been measured.

There are a few species of freshwater aquarium fish that resemble the rainbow shark, namely the red tail shark (Epalzeorhynchos bicolor); both of these fish are in the same scientific genus and come from the same regions of Southeast Asia. Luckily, there are a few ways to tell these two sharks apart.

Are there different types of rainbow shark?

While there is only one true rainbow shark, Epalzeorhynchos frenatum, the red tail shark is often misidentified and mislabeled under the same name.

When looking to correctly identify a rainbow shark, you will want to look at the body shape of the fish. Rainbow sharks are long and slim and have a pointed snout that has two barbs around their downward-pointing mouth. Red tail sharks tend to be less streamlined, but also have similar barbels.

Next, you can compare colors. Contrary to their name, rainbow sharks do not have all the seven colors of the rainbow. Instead, they’re mostly shades of greens, greys, and browns with lighter underbellies; in different lights and aquarium setups, they may change colors right before your very eyes! But in general, these fish are lighter than the almost-black red tail shark and also have a darker spot before their caudal fin as well as a band that stretches eye-to-eye.

Other varieties of rainbow shark

While true rainbow sharks will match this description, it is believed that red tail sharks and rainbow sharks have created a hybridized variety since being introduced into the aquarium hobby; because of sterilization and other possible mutations that may arise from hybridization, many hobbyists try their best to prevent the two species from spawning.

It should also be noted that there is an albino rainbow shark variation. This is when the fish has a deficiency of pigment so the body is usually a creamy peach color and the fins are are a less vibrant red. Sadly, this has made it easy for some companies to create and market an artificially dyed albino rainbow shark; if you happen to see a rainbow shark that is any color other than natural tones or albino, stay away!

How big do male and female rainbow sharks grow?

Gender is not possible to differentiate between juvenile rainbow sharks.

The rainbow shark is usually a favorite for many beginner hobbyists due to its orange fins and active lower water column behavior. However, these fish can grow to impressive sizes and can be too aggressive for some freshwater community fish.

The minimum aquarium size recommended for one rainbow shark is 55 gallons (208.2 L); if wanting to keep more than one shark, it is recommended to have at least 125 gallons (473.2 L) with bigger always being better.

There are some things you will need to take into consideration when setting up a tank with a rainbow shark in mind. As we’ll discuss later, these fish are more on the aggressive side than they are on the community-friendly side. They need lots of cracks and crevices to claim as territory all throughout the tank.

The rainbow shark is a relatively hardy species and does well in normal freshwater aquarium conditions. Water temperature should be constant between 72-79° F (22.2-26.1° C) with a relatively neutral pH between 6.5-8.0. In order to best replicate their natural habitat around the flowing Mae Klong, Chao Phraya, and Mekong River basins, water movement should be moderate.

Though these fish are best known as bottom dwellers, they have enough power to project themselves out of the top of the aquarium. It is highly recommended to have a secure aquarium lid or netting to make sure that you don’t lose your rainbow shark!

What substrate is best for a rainbow shark?

In general, sand is the best substrate option for rainbow sharks. Not only does it keep from injuring the undersides of the fish, but sand is also the most common substrate found in their natural ecosystems.

Rounded rocks and cured driftwood may then be arranged in the sand. Hardier plants may be added as rainbow sharks usually won’t try to nibble on vegetation.

Rainbow sharks are often sold while they are still small as juveniles. While these fish are small, they are usually advertised as being suitable for community aquariums. However, as they grow, their true personalities start to develop and many hobbyists run into problems when all of a sudden, their friendly rainbow shark starts chasing all the other fish in the aquarium!

When preparing to purchase a rainbow shark, it is important to consider the full size and personality that the fish can potentially grow into over time.

What fish can live with a rainbow shark?

One rainbow shark needs at least 55 gallons (208.2 L) to itself. Luckily, this leaves a lot of room for other species!

No matter if you’re getting a mature or juvenile rainbow shark, it’s best to get tank mates that are slightly more aggressive than typical community fish. These fish should be more active and able to defend themselves if your shark decides to be especially aggressive; it is also best to avoid other bottom dwellers and stick with fish that stay in the middle and upper water columns.

Some compatible species are gouramis, hatchetfish, barbs, rainbowfish, and bala sharks. If wanting to keep another bottom-dwelling fish, it is recommended to go with a larger species of fish that is still appropriate for the tank size, like the bristlenose pleco.

Many hobbyists have found that their rainbow sharks tend to become more aggressive over time. Whether this is because they get physically larger or they just become more comfortable in the tank, it’s a very real possibility that you end up with a rainbow shark bully.

For the most part, rainbow sharks stay in the lower water column, darting in and out of caves and establishing a territory system. If other freshwater fish species, or even other rainbow sharks, come into this area, then it is likely they will be chased away and nipped at.

In general, yes, rainbow sharks are semi-aggressive and should always be treated as such. They may start out as a community fish as a juvenile, but they can quickly become territorial as they grow.

Can rainbow sharks live together?

Interestingly, the rainbow shark has been noted to be more of an algae eater than red tail sharks. However, this does not mean that this fish is the best solution for your algae problems.

While your rainbow shark might help clean up detritus and nibble on some patches of algae, this species should not be seen as a means for algae prevention or algae control. Instead, they will need a varied diet of both plant- and animal-based foods to keep their red-orange fins as vibrant as they can be.

What do rainbow sharks eat?

In the aquarium, it’s best to give your rainbow shark a variety of live, frozen, and freeze-dried foods. They will appreciate worms (earthworms, bloodworms, Tubifex worms), shrimp (brine shrimp and mysis shrimp), and high-quality fish flakes and pellets. In order to meet their plant-based needs, blanched vegetables, like spinach, zucchini, and peas, should be offered every so often alongside an algae wafer or pellet.

Rainbow sharks have not yet been successfully bred in the aquarium hobby to a notable extent. Most of the fish currently available in the aquarium trade have been harvested from the wild or from commercial farms throughout Southeast Asia.

Breeding rainbow sharks can be difficult for a few reasons. First, it is very hard to tell the females apart from males, which can lead to wasted time and resources. Secondly, remember that these fish tend to be pretty aggressive towards each other. If neither fish is ready to spawn and the tank is not large enough for the both of them, then this can easily turn into a dangerous situation.

Lastly, these fish rely on the seasons to spawn. When conditions are right, the female will lay eggs and the male will fertilize them. However, these changing conditions can be hard to replicate in the aquarium setting.

These semi-aggressive fish need decent amounts of swimming space and additional objects in the tank to claim as territory. They can grow to impressive sizes and need to be fed an omnivorous diet.

If you have any questions about rainbow shark care, how to tell these similar species apart, or have kept a rainbow or redtail shark in your own freshwater aquarium, don’t hesitate to leave a comment below!