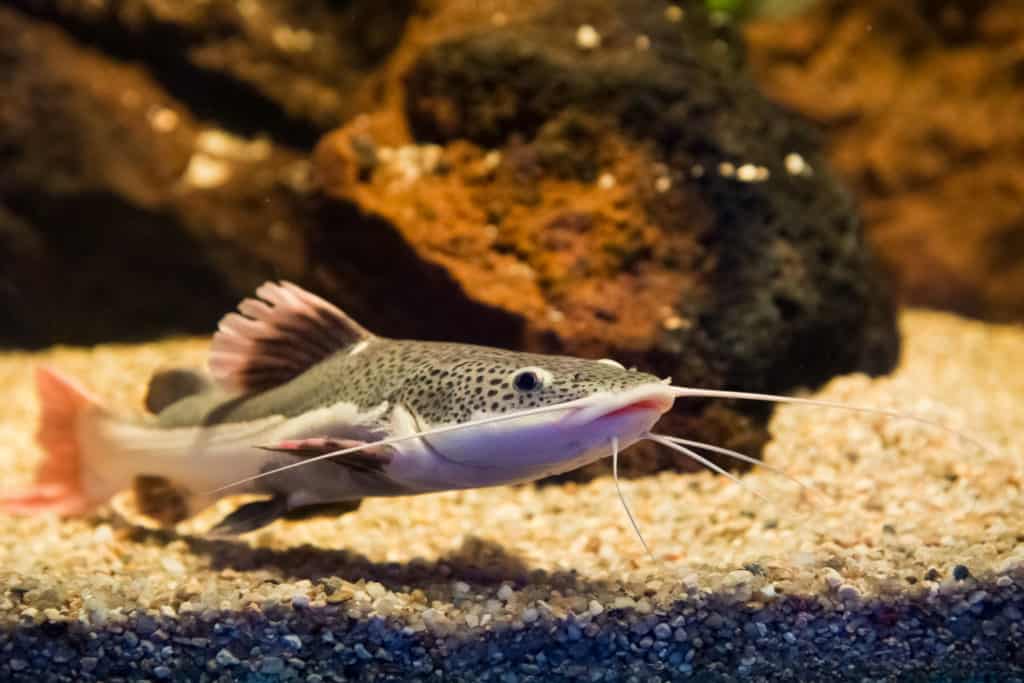 If you don’t have a 2700 gallon (10220 L) fish tank, this fish is not for you. We do not encourage purchasing a redtail catfish if you do not have the means to house it for the duration of its life and the full 5 feet (152.4 cm) it could potentially reach. Otherwise, these fish are extremely beautiful and are a fascinating species of catfish to admire from afar.

Keep reading to found out everything you need to know about the redtail catfish as well as some fun facts about all other kinds of catfish!

Phractocephalus hemioliopterus is commonly known as the redtail catfish (RTC) and banana catfish; in Venezuela is it known as the cajaro and in Brazil it is known as the pirarara.

This catfish is the only current species in the Phractocephalus genus. However, fossil records of P. nassi and P. acreornatus throughout Venezuela and Brazil respectively show that the genus is well over 10 million years old.

Because of its size and scavenger instincts, the redtail catfish has been blamed for the disappearances of people within the Amazon region as well as other parts of the world; because of the aquarium trade and other releases, this species has been introduced to new waters as far away as Thailand.

Most infamously, the redtail catfish is thought to be the culprit behind the drownings of the many that sank with the Sobral Santos II in 1981.

Today, the redtail catfish lurks the river beds of the Amazon and Rio Orinoco basins that run throughout large portions of South America, including Colombia, Venezuela, Guyana, Ecuador, Peru, Bolivia, and Brazil. This species can survive a broad range of water conditions and regularly travels between river basins and flooded forests. It is believed that these fish can live well over 15 years.

This fish is a very popular species for sport fishing and is commercially farmed in the Amazon for consumption.

What fish live with redtail catfish?

The Amazon and Rio Orinoco basins are large waterways that house a huge variety of aquatic species. Some notable wild freshwater fish species that share these river basins are arapaima, piranha, arowana, electric eel, freshwater stingrays, and many more.

Some aquarium species you may recognize are neon tetra, angelfish, oscars, discus, as well as many different kinds of pleco and catfish.

Note: Just because these fish can be found in the same rivers as the redtail catfish does not necessarily mean that they are compatible in an aquarium setting!

The redtail catfish is truly a beautiful fish that is very easy to identify. While they can easily grow up to and most likely even surpass 5 feet (152.4 cm), Phractocephalus hemioliopterus does not change appearance throughout its life. However, these fish have been hybridized with other species, such as the tiger shovelnose catfish (Pseudoplatystoma fasciatum), so some can be a little more difficult to exactly identify; they also come in a striking and very expensive ‘platinum’ color variation.

A purebred redtail catfish (Phractocephalus hemioliopterus) will have a white belly, brownish-black back, and signature red-orange tail fin; there may be some tints of yellow on their tail and sides. They have a flat body with 3 pairs of barbels, with one on the top jaw and two on the bottom.

There is no known way to differentiate a female redtail catfish from a male.

How big does a redtail catfish get?

While you are likely to see these fish at a reasonable size at the pet store, they grow extremely fast and will quickly outgrow a small aquarium. These fish are used to swimming up and down Amazon River basins, eating anything that can fit in their large mouth. Before buying one of these freshwater fish, make sure that you have a large enough aquarium to house it indefinitely as well as enough food to keep up with its near-insatiable demand.

Remember, never buy a fish with hopes of upgrading and never release any aquarium fish into the wild.

While it is strongly advised to not keep redtail catfish as pets, if you have space, make sure to keep them responsibly.

These large fish require at least a 2700 gallon (10220 L) aquarium or pond that is deep and wide since they like to stay towards the lower water column. They will do best in an aquarium without substrate, but can be kept on sand if you don’t mind it getting pushed around the rest of the aquarium; gravel and other stones can easily be eaten and can cause damage to the underbelly and gills of your fish.

Redtail catfish do not need any decorations in the aquarium, but some secured branches or driftwood/bogwood will give your fish a place to hide. Dim lighting should also be used to keep your fish from stressing out while replicating the natural murkiness and turbidity of South American river basins.

They will need a stable water temperature between 70-79° F (21-26° C) with pH between 6.0-7.5. It is best to keep as much filtration out of the aquarium as possible as these fish will blindly eat anything that can fit in their mouth. Especially for such a large aquarium like this, external filtration may take up its own separate room.

Redtail catfish can be housed with other freshwater fish if kept in a large enough aquarium as long as those fish can’t easily be eaten. It is best to go with similar species from the Amazon and surrounding areas that are relative in size. Even at a small size, these fish should not be housed with smaller fish, like tetras.

Some suggested tank mates are Doradids, Characins, and Cyprinids.

Redtail catfish are actually pretty peaceful. The problem is that they are opportunistic scavengers, and will try to eat anything they detect with their barbels.

These large fish tend to gently drift along the bottom but can quickly react once a stimulus is introduced into the water, like something falling or other fish swimming nearby.

Redtail catfish can become territorial in small spaces and can kill other fish in attempts to defend their established areas in the aquarium or pond. Since they need such a large aquarium, it is usually safest to only keep one redtail catfish by itself to prevent any possibilities of other fish becoming a meal.

Redtail catfish are known to eat practically anything that can fit inside their mouth; they will not even hesitate to go after prey that is half their own size! Their main diet consists of other freshwater fish, invertebrates, and anything else that may have fallen into the water.

In the aquarium setting, redtail catfish should be provided a variety of food but should never be overfed as catfish tend to reach an overweight size very quickly. Redtail catfish also tend to become picky and if they’re given the same food regularly, they may start to refuse other foods. An adult only needs to be fed about once a week.

Redtail catfish can be offered small invertebrates, worms, and frozen fish that you would normally buy at the grocery store. Never feed chicken or beef as these cannot be properly digested by your fish. These foods could lead to increased deposits of fat or even organ damage.

While Phractocephalus hemioliopterus might be the fish of your dream aquarium, all catfish have something unique about them! Here are some things about catfish that you may not have known:

Why are catfish called catfish?

What came first, the cat or the catfish? It might seem simple, but these fish are named exactly after their resemblance to terrestrial cats with barbels looking like whiskers. Similarly, these fish also use their barbels to detect their surroundings just like cats rely on their whiskers to help them.

How do catfish detect food?

Catfish have amazing smell, taste, and touch, which helps them navigate the deep murky waters where they’re naturally found. Most notably, catfish have barbels which are modified sensory organs near the mouth of the fish that further help detect possible food. These barbels are filled with taste receptors that process enzymes that have been emitted from a food source or from a predator. Some catfish even have receptors across their entire body that further help smell and taste through the water.

Others have been known to develop barbel-like structures in response to external influences such as low oxygen levels and low food availability.

Where do catfish live?

With over 3000 different kinds of unique catfish, these fish can be found on every continent except for Antarctica. Most are from South America like the redtail catfish, but there are also high populations in Africa and Asia as well. Interestingly, only members of the Ictaluridae family are native to North America while only members of the Siluridae family are native to Europe.

Some species live underground, while others take refuge in caves. Some even live in saltwater environments! However, most catfish live in freshwater environments in shallow, running waters.

How are catfish different from other fish?

Catfish are categorized under the Siluriformes order while most typical aquarium fish are found under Characiformes (tetras, hatchetfish, pirahna), Cichliformes (cichlids), Cypriniformes (loaches, minnows, carp), or another order.

Members of Siluriformes can be identified by the structures of their skull and swimbladder. Catfish have a flattened bony head that helps with burrowing through substrate and a large un-protruding mouth for quickly sucking in food. Because they are bottom feeders, these fish do not need to be as buoyant as other fish, and have a reduced swim bladder.

Catfish do not have scales and some have modified skin that allows them to breathe through their outer body. Some will also have spines in their dorsal and pectoral fins that can be venomous to the point of being lethal, like the striped eel catfish (Plotosus lineatus).

Catfish also vary greatly in size, which is not like most other fish orders. Some of the smallest, like Corydoras, remain small while others, like the aforementioned Mekong catfish, can grow to an astronomical size!

If your search for the perfect catfish for your tank has halted due to the high demands of the redtail catfish, have no worry, there are plenty of other kinds of catfish that would do great in an aquarium that is actually a manageable size. Here are some kinds that we recommend for a freshwater tank:

With so many different kinds of beautiful catfish available, the redtail catfish should only be an option when requirements have been met. As always, adequately research the fish you are wanting to buy before going out and getting it.

Catfish are extraordinary fish, and the redtail catfish will definitely need an extraordinary home. Phractocephalus hemioliopterus is mostly reserved for public aquariums and other aquatic centers, but extreme hobbyists have successfully kept them in ponds and large freshwater tanks.

If you’re not up for having a fish that could grow as long as you are tall, then you are better off sticking to smaller catfish like striped Raphael catfish (Platydoras armatulus), Otocinclus, Corydoras, glass catfish (Kryptopterus vitreolus); even plecos (Hypostomus plecostomus) can get very large and will need special care, but are much more manageable than the redtail catfish!

If you have any questions about Phractocephalus hemioliopterus care or have experience with these incredible fish, don’t hesitate to leave a comment below!