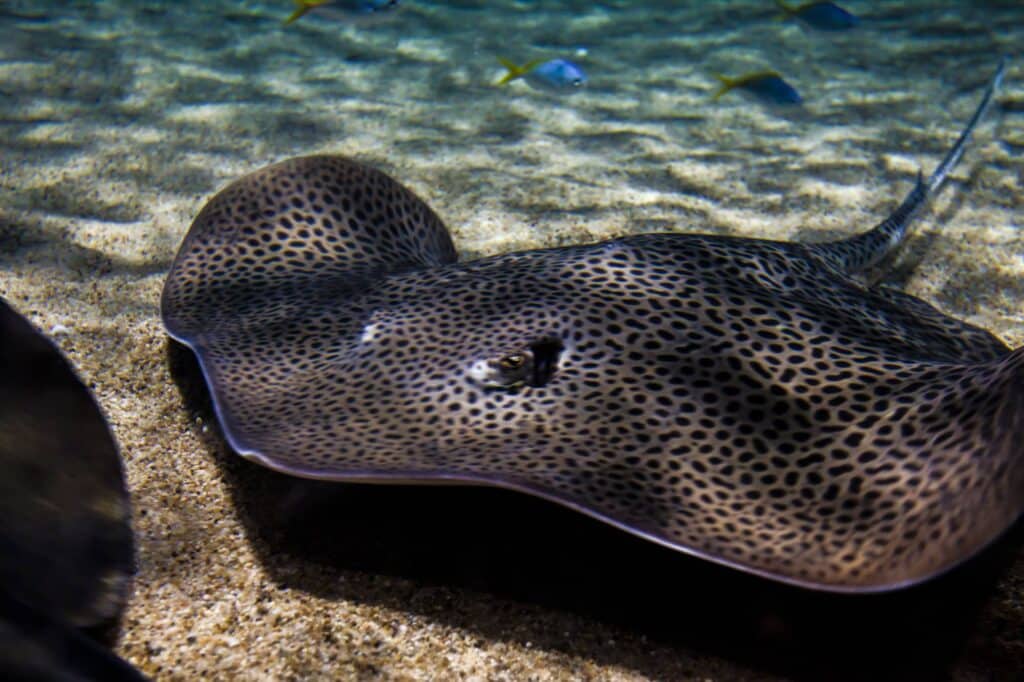 If you’re an experienced aquarist and you’re looking for something different and undoubtedly impressive to add to your collection, the freshwater stingray might be a species to consider. Rays can be challenging to keep and are expensive to buy, so be sure to do plenty of research on their care before you part with your cash.

These friendly, fascinating creatures are becoming an increasingly common sight in specialty fish stores and online. But are freshwater stingrays easy to keep, and can you breed them in your home tank?

Keep reading for the definitive guide to keeping these beautiful, enigmatic freshwater fish.

What Are Freshwater Stingrays?

Freshwater stingrays belong to a large family of true rays, much like their saltwater relatives. These rays are also close cousins of sawfish and sharks.

Freshwater stingrays have a cartilaginous skeleton rather than bone. They also possess electrosensitive pores called Ampullae of Lorenzini, which enable the fish to detect the electronic impulses given off by all animals. That allows the carnivorous stingrays to detect prey items hidden under the substrate and hunt in complete darkness.

The freshwater stingray is found in many different tropical regions of the world, and there are many different varieties. Although there are different sizes of stingrays, most are large, and even the smallest reaches up to a foot in diameter. So, you will need a large tank with powerful filtration to house one of these beauties.

Although you can tame your stingray to accept food from your hand, and many even enjoy being petted, you must be very careful of the fish’s venomous stingers.

How To Handle Freshwater Stingrays Safely

Freshwater stingrays, as their name suggests, possess a row of barbs on their tail. The venomous barb is actually a modified scale, and the stingray only uses it for defense.

To dispel a common myth, these fish don’t attack people with their stingers and are not aggressive toward humans. Accidents generally happen when wild stingrays are stepped on or improperly handled. However, in captivity, the stinging barbs are periodically shed and replaced by new ones. The discarded barbs then fall to the bottom of your fish tank.

A sting from the barb of a freshwater ray is excruciating and much more potent than saltwater rays. The venom is produced by cells that also produce toxic mucus. A peptide mix of pain-inflicting agents is produced in juvenile rays, while adult fish use inflammatory proteins that cause tissue necrosis. The potency of the venom is influenced by the ray species, diet, and water chemistry.

Stingray venom is cardiotoxic. However, most injuries are to the fingers or feet and are not as dangerous or life-threatening as a sting to the trunk or closer to the heart.

Rays only use their barbs defensively if they feel threatened. Most injuries to ray keepers are accidental and can be avoided if you take care not to frighten, harass, or stress your rays.

What To Do If You Get Stung

If you do get stung, you should plunge the injured area into very hot water, as heat negates the effect of the ray’s venom. You should also seek urgent medical attention.

The wound itself might not be severe, but the surrounding tissue could die as a potentially very dangerous side effect of a sting. If a barb breaks off in your skin, you must consult your doctor or get to the emergency room.

Should You Clip Your Stingray’s Barbs?

The matter of clipping stingrays’ barbs for the safety of keepers is highly contentious.

Although the barbs don’t contain nerve endings and removing them is not thought to cause pain, the experience is undoubtedly stressful for the fish. Also, the barbs grow back relatively quickly, meaning that you would have to repeat the process all over again.

In the past, almost all the freshwater stingrays offered for sale were wild-caught. That meant that the fish were stressed and often carried diseases and parasites. However, most of the rays you see in fish stores these days are captive-bred.

Since 2017, some states, including California, Arkansas, Hawaii, Arizona, Nevada, Mississippi, Utah, and Texas, have banned the ownership of Potamotrygon species, while Florida and Colorado demand a permit. So, before buying a freshwater ray, double-check the rules for wildlife ownership in your area.

Tips For Buying A Freshwater Stingray

When buying your ray, look closely at the fish to make sure that the edges of the disc are not curling up, commonly known as the “death curl.” You also need to check that the ray has no obvious nicks or other injuries.

Ask the vendor to show you the ray eating. If the ray shows no interest in food, don’t buy it. Also, we advise that you don’t buy any recently acquired rays. Ask the store to reserve the fish for you, and allow them a week or so to settle in before you make your purchase and take the fish home.

New rays should be quarantined for at least one month before being added to your existing tank.

In North America, fish stores usually sell stingrays of the Potamotrygon genus found naturally in South America. Most of these fish come from a particular river system, with most found in the Amazon River.

The rays’ preferred habitat is slow-moving rivers with a sandy substrate bottom. However, some species of freshwater rays can be found in flooded forest areas when the rainy season arrives.

Stingrays can be fun to keep, and they do make great interactive pets. However, these fish are not suitable for beginners, and they can be challenging to feed and keep healthy.

As mentioned previously, most stingray species grow to a large size, so you’ll need a large tank.

Although the tank height isn’t important, the aquarium for freshwater stingrays should be at least 72” to 84” in length and between 24” and 36” wide. You can use a 75 to 90-gallon tank for juvenile stingrays, but adults must have at least a 180-gallon to be comfortable.

Rays like to burrow down into the substrate, so fine sand is essential. Make sure that any decorations are smooth and don’t have any rough surfaces or sharp edges. When decorating your tank, be sure to leave lots of open space on the bottom so that the rays have plenty of swimming area and scape to bury themselves in the sand.

Your tank heater must have a guard fitted around it. Choose an in-line design or put the heater in a sump so that the rays don’t burn themselves. Tank lighting should be subdued and set on a 12-hour night/day cycle.

Stingrays are extremely sensitive to water conditions, especially to ammonia, nitrite, and nitrates. For that reason, you need to have a good understanding of the Nitrogen Cycle and how it works.

Most freshwater stingrays require a constant water temperature between 75° and 82°F. The water pH should be in the range of 6.8 to 7.6, with an alkalinity between 1° and 4°. Ammonia and nitrites must be zero, and nitrates should be below 10 ppm.

You should not add salt to the tank, and many stingray owners use DI/RO water, together with a trace element restorer.

Freshwater stingrays spend most of their day on the tank bottom. The rays’ eyes and spiracles (gill inlets) are sited on top of the fish’s body so that they can stay hiding under the sand, waiting for prey to appear.

Stingrays hunt by jumping out of the sand, trapping prey animals under their bodies. When it comes to choosing tank mates for rays, the most compatible fish species are:

Tank mates for freshwater rays must be peaceful fish, and large enough not to be eaten, so they don’t bully the rays. Upper water level swimmers are the best choice so that the rays have the bottom of the tank to themselves.

Fish species to avoid include Plecos and other suckermouth catfish, as these have been seen sucking on the rays’ soft bodies, causing injury and stress.

All freshwater stingrays are carnivores. In the wild, the fish eat mainly crustaceans and other fish.

In captivity, most keepers find that their rays accept live blackworms and earthworms as an introduction to frozen foods, including bloodworms and mysis shrimp. You can also feed your rays raw white fish and raw shrimp, and captive-bred rays can be offered sinking pellets and tablet foods.

Once your rays have settled in, you can often train them to take a portion of food from tweezers or your fingers.

It’s thought that all freshwater stingray species are livebearers. Female rays have two uteruses, meaning that they can simultaneously carry two litters of pups from two different male rays.

However, unless you have lots of space and time for this project, breeding rays in captivity is difficult.

Although there are many species of freshwater rays to be found in the trade, you only see a few of those in fish stores.

Tiger River rays are quite popular in the trade, although not much is known about them. These fish are one of the larger species of Amazonian rays growing up to 28” in diameter. These fish from the Peruvian Upper Amazon region are also one of the most sensitive to water quality.

The majority of Tiger River rays are wild-caught, costing upward of $750.

This species is one of the most commonly found in home aquariums. These fish come from South America, specifically the Orinoco, Amazon, Mearim, and Río de la Plata river basins.

These rays are one of the easiest species to look after and grow to measure up to 24” in diameter. You can expect to pay up to $300 for an Ocellate ray.

Atlantic stingrays are native to the US. Freshwater rays are found in the St John’s River in Florida. In contrast, others migrate between ocean, brackish, and freshwater environments, searching for food from Mexico north to the Chesapeake Bay.

These rays are one of the smallest species, measuring up to 12” in diameter. They are also one of the cheapest rays at around $100, and they are readily available.

These rays are rare in nature and are consequently one of the most expensive fish in the hobby.

Black Devil Stingrays come from the Xingu River tributary of the Amazon, and this is the only place where these unusual, beautiful fish exist in the wild. Because of their rarity, the export of these fish is banned, although you can find captive-bred specimens, as these fish are relatively easy to breed.

The Porcupine River Stingray comes from the upper reaches of the Rio de la Plata and is a very popular choice for first-time ray owners.

These rays are relatively cheap, are less sensitive than other species. They are also relatively small, reaching up to 16” in diameter. You can expect to pay up to $250 for one of these beautiful rays.

Freshwater stingrays can make a spectacular addition to your collection, although their size and sensitivity to water conditions make these creatures challenging to keep successfully.

Many regions prohibit the keeping of stingrays, as many species are threatened in the wild, so be sure to check the rules with your local authority before you spend your cash on one of these beautiful animals.