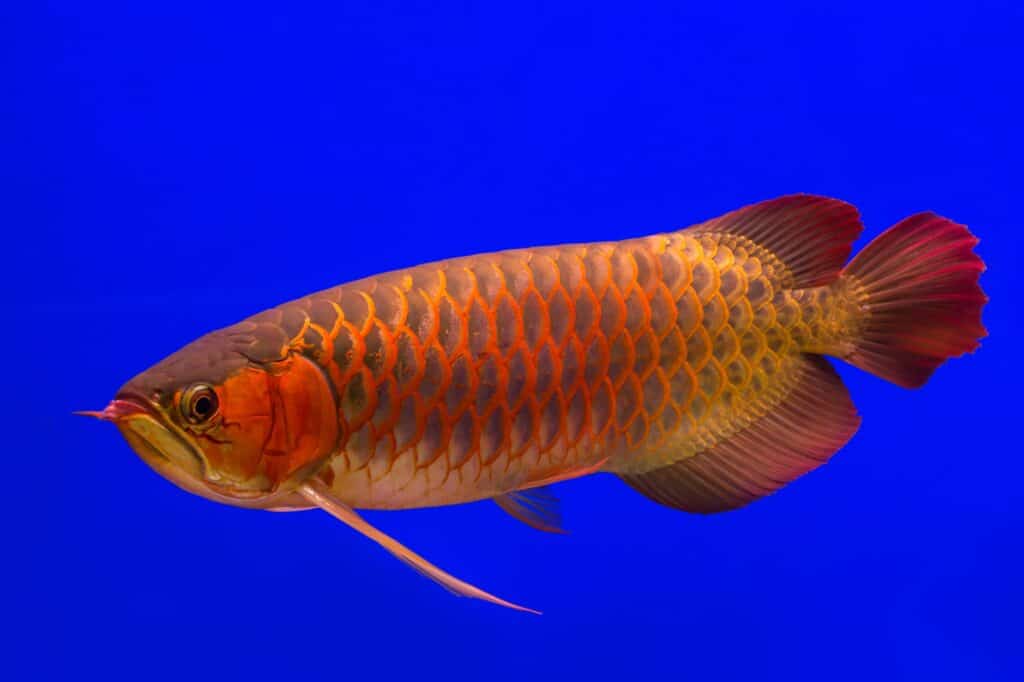 To keep big, ancient-looking red arowanas, you would need a huge freshwater tank or spacious pond. However, even if you could afford to buy one of these prehistoric, endangered creatures (and the tank needed to keep it), you would be breaking the law if you tried to keep it in the United States.

Read on to find out more about the mysterious red arowana and why it’s against the law to own one!

Why is it illegal to own a red arowana in the U.S.?

Although red arowanas are currently on the IUCN Red List as being of least concern, they’re covered under the U.S. Endangered Species Act. Because of that, the Convention on International Trade in Endangered Species of Wild Fauna and Flora (CITES) put the red arowana under Category 1, a restriction that makes it illegal to sell or import these fish in the United States.

There are also major concerns that once they outgrow their tanks, these fierce predatory creatures will be released into the wild, potentially decimating the local ecosystem. The red arowana can only be bred under license, and those exported from Asia are all microchipped so their owners can be traced.

Despite all the restrictions and warnings of hefty fines for those caught keeping these fish, thousands of arowanas still manage to find their way into home aquarium setups in the U.S.

What is a red arowana?

The red arowana (Scleropages formosus) belongs to the Osteoglossidae family of ancient fishes.

These Southeast Asian fish are also known as chili red, blood red, or super red arowanas. In Chinese culture, they’re significant because they resemble the dragon, hence the fish’s common name: dragon fish. Their red coloration is also considered lucky, and the fish are said to bring good fortune to their owners. Despite being a good luck charm, though, arowanas are used as a food source in some places.

Arowanas have what’s referred to as a “bony tongue,” a bone structure at the bottom of the fish’s mouth that has teeth, which the creature uses to crush its food against the top of the mouth cavity. These fish are classified as bony fish, meaning they have a skeleton made of bone instead of cartilage.

According to fossils that have been discovered, these prehistoric fish were around over 150 million years ago!

The red arowana varies wildly in price, depending on the size and age of the fish. Generally, a small juvenile specimen will set you back about $100, but you can pay up to $5,000 for one!

Thanks to their size and rarity, arowanas are one of the most expensive fish in the world, retailing around $300,000 in some cases.

As previously mentioned, you’d probably struggle to legally import this rare and expensive aquarium fish, although you can find them for sale online from Asian arowana breeders.

Arowanas are extremely active hunters, cruising their aquariums right under the water’s surface looking for food.

These fish’s appearance includes the characteristic “drawbridge” jawline of all arowanas with a steeply angled mouth and a long, flat body covered with five horizontal rows of large scales.

Every scale has a base color, a first rim, and a second rim, and the scales have brilliant red rims, often with a glowing gold base color. The fish’s large and jet black eyes sit right next to its mouth.

Arowanas are facultative air-breathers. That means they can breathe atmospheric air if their water is poorly oxygenated.

One of the main challenges of keeping a red arowana is that the fish can grow to a massive size, sometimes reaching up to 35 inches in length!

Side note: this fish has a long lifespan, too, commonly surviving for over 20 years. There are even reports of some fish living 60 years, so taking on one of these giants is a big commitment!

Red arowanas come from slow-moving streams and rivers in Southeast Asia. The water there is warm and generally slightly acidic, and the waterways are broad and deep. That gives the fish plenty of space for swimming and a fine, sandy substrate with sparse vegetation, debris, and rocks.

Red arowanas prefer swimming in the middle of the water column, though they will move around all areas of the tank.

These carnivorous fish are extremely territorial and will often fight others of their own kind, so you’ll need to keep each specimen in its own tank to avoid incidents.

How to Care for a Red Arowana

Although red arowanas are undoubtedly exotic fish, they are surprisingly easy to care for, as the very hardy fish are tolerant of a range of water conditions.

For one arowana, you’ll need at least a 250-gallon tank. If you decide to keep more than a single fish, you need to add 100 gallons per additional fish. Keeping these fish in a tank that’s too small will result in stunted growth and possibly deformities, too.

Keep in mind that arowanas are capable of leaping right out of the water, so you must keep a sturdy cover slide or a tight-fitting lid on your tank to prevent potential escapes — especially if your fish spots a tasty fly buzzing across the water surface.

Depending on the climate, you can keep beautiful giant dragon fish in outdoor ponds. If you decide to do that, we recommend fitting a tightly strung net across the surface to keep the fish safely in the pond.

Since these are very large, active fish, you need to allow plenty of swimming space in the tank.

Don’t overcrowd the habitat with decorations and aquatic plants; you only need a few pieces of rockwork and perhaps some driftwood. After all, the fish is the star of the show anyhow!

The ideal substrate is very fine gravel or sand, and you’ll find your arowana’s gorgeous colors will show up best against a dark background.

Red arowanas are tropical fish, so they require warm water at a temperature of between 75 and 82 degrees Fahrenheit. The water pH should be in the neutral range, between 6.0 and 7.0.

These large fish need an efficient filtration system to keep the tank clean and maintain water quality. Your best bet for a tank that’s big enough for arowanas is an external canister filter system that can circulate the water through the aquarium at least four times per hour.

In their natural habitat, the water flows very slowly and is even stagnant in some cases. However, these fish can tolerate a moderate flow in the aquarium.

It’s not a good idea to keep multiple red arowanas together since they tend to fight. However, groups of six or more individuals are usually more tolerant of each other, although you’d need a massive tank to accommodate that many!

So, there are a few fish species that can make suitable tank mates for these beautiful giants. As they share similar requirements, try keeping the following species with your red arowana:

These creatures should only be taken on by aquarists who have experience keeping elasmobranchs, as they’re not the easiest to care for and they have special requirements.

The giant gourami (Osphronemus goramy) usually does well when kept with arowanas. These fish can reach up to 16 inches in length when fully grown, but they’re peaceful, solitary fish that tend to keep to themselves.

Gars (Lepisosteiformes order) are members of another ancient fish species that dates right back to the Jurassic period. These large fish come in several varieties and can make suitable tank mates for the arowana.

Keeping with the prehistoric theme, the dinosaur bichir (Polypterus senegalus) makes an interesting addition to a red arowana tank. These giants can reach two feet long, and they spend their lives moving around the bottom of the aquarium where they won’t trouble your arowana.

The family of knifefishes has a unique look, having neither fins nor scales. Knifefish can reach a foot or more in length and are quite active swimmers, so if you plan to accommodate these guys and your arowana, you’ll need a very large tank.

Since the arowana is carnivorous, we don’t recommend keeping any fish that are small enough to fit into the predator’s mouth. Most species of freshwater inverts are likely to be on the arowana’s menu, too, so steer clear of those as well.

To keep confrontation and fights with tank mates to a minimum, try to choose species that inhabit the lower levels of the tank. Also, note that every individual red arowana has its own personality, and some fish are more aggressive than others; it’s up to you to keep an eye on your fish and separate them if fighting breaks out.

If you’re planning on using feeder fish, make an effort to find a reputable supplier. Feeder fish commonly come with an unwanted cargo of parasites and disease that could affect all the fish in your aquarium.

Frozen foods, flakes, and carnivore pellets are also suitable food options for these fish, however, remember that because they’re primarily surface feeders, any food that drops to the bottom of the tank will most likely go to waste. You’ll need to remove the uneaten food to prevent water pollution.

Although they’re not generally fussy feeders, you might need to try a few different foods to find out what your arowana prefers. It’s also a good idea to vary the fish’s diet every once in a while, as some high-protein foods like mealworms can lack other nutrients. Keeping variants in the diet also helps keep your fish interested at feeding time.

How often should I feed red arowanas?

When the fish are small, they can be fed once or twice a day. You generally find arowanas only need feeding once every two days when they’ve grown to be 12 inches long.

Breeding these fish in captivity is not really a practical option, largely because of their aggressive nature and size.

In the wild, red arowanas spawn when the rainy season arrives, and adult fish form breeding pairs. The female fish lays her eggs, and the male mouth-broods the fertilized eggs until they hatch. It generally takes around two months for the eggs to produce free-swimming fry that can fend for themselves.

As is often the way with very large fish species, the brood size is quite small at only a dozen or so eggs in one spawn, totaling a couple hundred every spawning season.

If you live in the United States, the large and beautiful red arowanas are an illegal, super-expensive pet fish; because they’re currently endangered, you can’t keep and import them in the States and we don’t really recommend you try.

However, if you live in a country where you are permitted to keep them and you have a fish tank large enough to handle this species of fish, be prepared to make a big commitment to these long-living giants. And, as red arowanas are one of the world’s most expensive aquarium fishes, you’ll need a pretty generous budget to buy one!