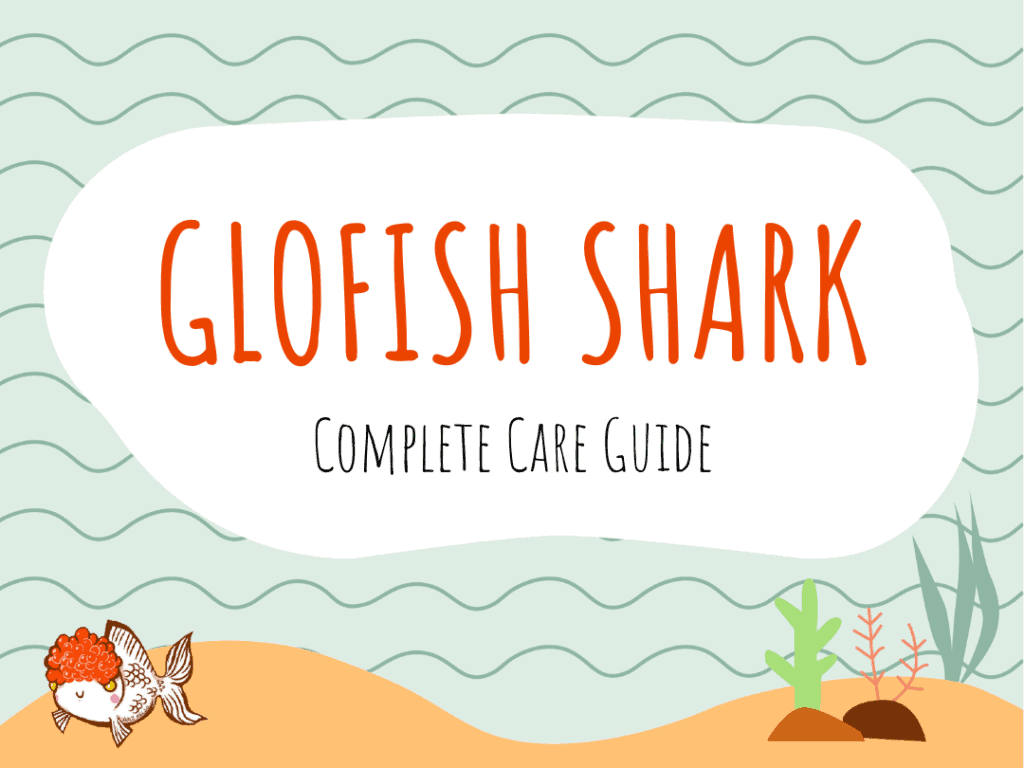 The popular GloFish have been around for quite a few years, much loved by hobbyists who want to create a colorful tank without having to spend a fortune on expensive exotic fish species. The latest addition to the GloFish stable is the GloFish shark, and it’s that variant we focus on in this article.

In this guide, we find out more about GloFish and, in particular, the GloFish shark. Here you’ll learn how to care for these beautiful fish, including tank mates, feeding, water conditions, and more!

GloFish are simply freshwater aquarium fish that have been genetically modified to give them a brilliant fluorescent color. You can get GloFish in the following patented colors:

Contrary to popular belief, GloFish are not injected with dyes or otherwise artificially colored.

GloFish were created by scientists in Singapore who adapted various fish species’ fluorescent genes as biomarkers to create genetically modified fish with “natural” bioluminescent colors. Once the process had been perfected, it was a Texas company that took out the patent and began creating fish for sale to the public.

The first GloFish were Starfire Red zebra danios, which were first released to the market in 2003. Such was the fish’s popularity; the company went on to develop further fluorescent colors and species, including GloFish barbs, Glofish tetras, and most recently, sharks.

All GloFish look like regular fish under white light, but their stunning colors emerge when exposed to black and blue light. Although purists don’t like these artificially created fish, GloFish sales now account for around 10 percent of annual aquarium fish sales.

Are GloFish good for beginners?

GloFish can be a good choice for beginners, depending on what species you choose. Like all fish, some have more complex care needs than others, so potential owners must do their research on their desired fish carefully before purchasing.

What are GloFish sharks?

GloFish sharks are similar fish to rainbow sharks, and they have pretty much the same care requirements.

These fish are members of the Cyprinidae family, having the scientific name Epalzeorhynchos frenatum. GloFish sharks are artificially created variants of the rainbow shark, and you won’t see these fish in the wild.

Rainbow sharks occur naturally in the Bangfai, Mekong, and Chao Phraya basins of Indochina. Unfortunately, the species is decreasing in numbers, largely because of habitat destruction. That said, the shark doesn’t yet appear on the IUCN Red List.

Rainbow sharks are bottom-dwellers, living in small rivers where the substrate is soft sand. The fish are omnivores, eating mainly plankton and algae.

How big do GloFish sharks get?

The fish are long-bodied and flat-bellied with pointed snouts and erect dorsal fins, giving the fish a shark-like look. In nature, males are generally brighter in color than females, although that isn’t the case with GloFish sharks, as the sexes are pretty much the same color.

Sharks reach breeding condition when they are around 4 inches long.

GloFish sharks can live for between five and eight years in a well-maintained tank if cared for properly and fed a high-quality diet.

Just like regular rainbow sharks, GloFish sharks are territorial and aggressive toward other fish that invade their space.

That said, you can keep these fish as members of a community tank, provided that you have a large aquarium with plenty of hiding places, and choose larger tank mates that inhabit the upper parts of the water column. Bottom-dwellers should be avoided, as they will undoubtedly come into conflict with the GloFish shark.

What fish are good tank mates for GloFish sharks?

You can create an interesting display by including peaceful fish species that are capable of avoiding your GloFish shark and handling themselves if necessary, such as gouramis and rainbowfish.

Try including other GloFish species, such as barbs and danios, in different fluorescent colors to really bring your tank to life!

You can help to curb your shark’s aggression by introducing him to the tank last so that he doesn’t try to claim the whole setup as his own and feel that he has to defend it from all newcomers.

Can GloFish sharks live together?

You can keep juvenile GloFish sharks together, as they are tolerant of each other and are quite timid. However, as the fish mature, they become more aggressive and are best kept as single specimens.

These are not naturally shoaling fish, being solitary fish in nature, and they will attack others of their kind. If you decide to attempt keeping a pair of sharks together, you’ll need a very large tank that provides at least one square meter of floor space per fish.

There’s no doubt that a GloFish shark would make a stunning addition to your home aquarium. But before you rush out to buy one, you’ll need to know how to care for them.

Read on to find out everything you need to know!

GloFish sharks are extremely lively, bottom-dwellers, and they need a spacious tank with lots of swimming space. For that reason, we recommend a long, shallow tank, rather than a bowl-shaped tank or a tall design.

You should also fit a lid or cover slide to prevent your fish from leaping out of the tank, which sometimes happens when new fish are introduced to a setup.

Ideally, you need a tank of at least 50 gallons for one shark. However, if you decide to attempt keeping more than one specimen, you’ll need an aquarium that’s at least 6 feet long with a 125-gallon capacity.

GloFish sharks need hiding places they can claim as their territory. So, include lots of overhangs, caves, driftwood, and thick planting that the fish can adopt as their own space.

The best substrate for sharks is fine, sandy gravel that won’t injure the fish as they swim along the bottom of the tank.

In nature, sharks live in rivers where the water movement is fairly strong, and the water is well-oxygenated. In the aquarium, you’ll need a mechanical filtration system that provides good flow, and it’s also a good idea to use an aquarium bubbler to add more oxygen to the water.

Filtration systems are rated in GPH, and you’ll see that number printed on the product packaging. GPH stands for Gallons Per Hour, which refers to the water circulation capacity of the unit. Ideally, you want a GPH that’s at least four times the total water volume of your aquarium.

For example, if you have a 50-gallon tank, you want a filtration unit that produces a GPH of at least 200. It’s important to know that the GPH is based on an empty aquarium or one that has only a small number of fishes, so always choose a filter that provides a slightly higher GPH than you need.

GloFish sharks are a tropical species, so the water temperature should be between 75 and 81 degrees Fahrenheit. The water pH should be in the range of 6.5 to 7.5 with a water hardness of between 5 and 11 dKH.

Sharks don’t need any special form of lighting, and a regular broad-spectrum lighting unit is fine to provide live plants with what they need for photosynthesis. However, if you add an LED lighting unit that has blue or black lights, that will really make the fluorescent colors of your GloFish pop!

There’s also the option of the GloFish Cycle Light that offers four different light modes that totally enhance the colors of your fish and tank décor.

Do GloFish need light at night?

The lights in your fish tank are there to provide living plants with the light that they need for photosynthesis and to illuminate the tank so that you can see your fish.

Ideally, you should have your lights on for between eight and ten hours per day for your plants. The lights should be turned off at night.

If you take on juvenile sharks, be sure to feed them a high-quality diet so that your fish grow well and maintain their bright colors.

Feed your GloFish twice a day, providing only what they will devour in a couple of minutes.

GloFish sharks are pretty hardy fish that don’t generally suffer from too many health problems, provided that you keep their tank clean, manage the water conditions correctly, and give your fish a correct, high-quality diet.

Your sharks should be lively, active creatures that constantly search for algae to eat and chase away any fish that encroach too closely on their territory. If your fish become lethargic or lose interest in food, trouble could be brewing.

Ich is more commonly called white spot disease. The condition is caused when fish are attacked by the aquatic parasite, Ichthyophthirius multifiliis.

Initially, infected fish rub against solid surfaces within the tank in response to the irritation caused by the parasites. As the disease progresses, a sprinkling of white spots develops across the fish’s body, fins, and gill covers.

Ich can be fatal if not treated. To disrupt the parasites’ lifecycle, increase the water temperature in the tank to 82 degrees Fahrenheit for three to four days, and add a white spot disease medication to the tank.

Flukes are another common parasite that can affect sharks.

These creatures typically find their way into your tank and onto your fish via plants and live foods. Flukes attach themselves to the fish’s gills and body, depending on the species of parasite, and you can often see them with the naked eye.

Treat flukes by adding an anti-parasitic medication to the water.

Many species of bacteria live in fish tanks, only causing problems when the fish are weakened by the effects of stress or sustain some injury that provides an entry point for the bacteria.

Bacterial infections can be treated by adding an antibacterial medication to the aquarium and carrying out frequent water changes.

Fungus commonly affects fish that are kept in poor water conditions and dirty tanks. If you notice white, fluffy growths on your fish’s body, fins, or head, the problem is most likely caused by some variety of fungus.

Fungus can be treated with antifungal medication.

Where can I buy fish disease medication?

You can buy products to treat the most common fish diseases over-the-counter at your local fish or pet store or online without a veterinary prescription. If you can’t find what you want in-store, ask your veterinarian for advice.

You can help to keep disease and parasites out of your fish tank by taking a few simple precautions.

When you buy fish, always keep them in a quarantine tank for at least ten days and make sure they are healthy before introducing the newbies to your display tank. All new plants and decorations should be rinsed thoroughly in a solution of water and antibacterial treatment to get rid of parasites and bacteria.

Unfortunately, it’s virtually impossible to breed GloFish sharks in a home aquariaum, mainly because the fish are so aggressive. For that reason, the GloFish sharks you see in pet stores or for sale online are raised commercially.

GloFish sharks are the most recent addition to the GloFish portfolio of species.

You can buy these beautiful fish direct from the GloFish online store and other online stores at similar prices.

GloFish sharks are the latest addition to the range of brightly colored GloFish color morphs that have been created by genetic modification.

Although these neon-bright fish are not to everyone’s taste, they can certainly give your aquarium an injection of color, and they are pretty easy to care for. GloFish sharks are pretty hardy creatures that have basic care requirements. The only drawback is that they are not community fish, so you do need to choose their tank mates carefully.