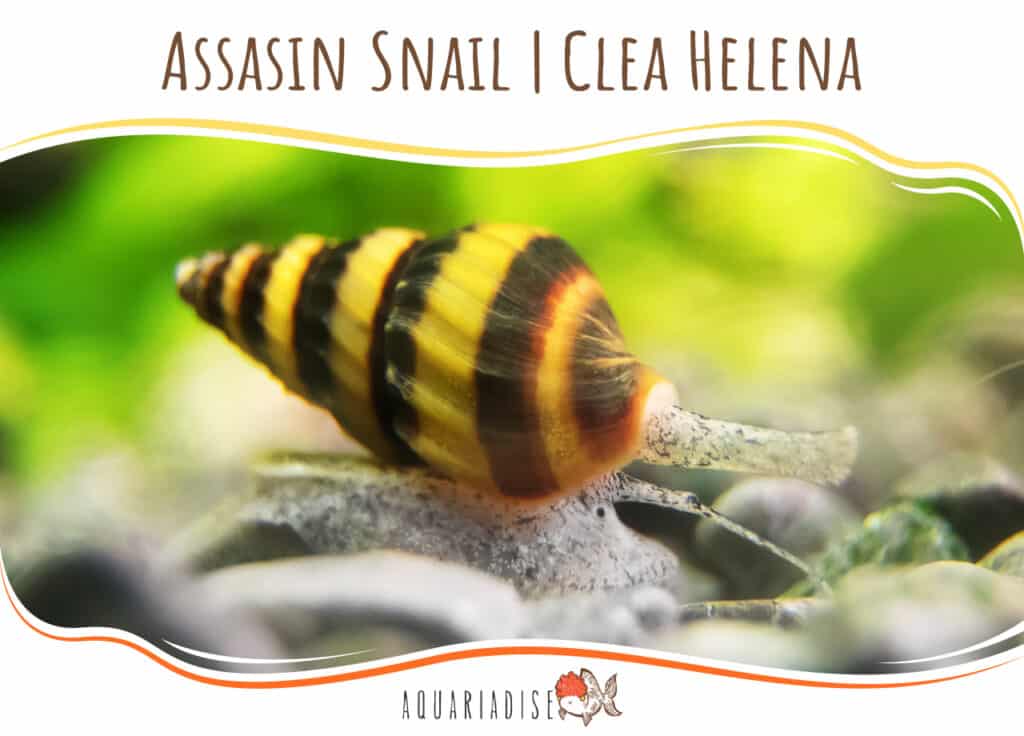 Even the most careful aquarium hobbyist can end up with a pest snail infestation in their tank. In the search for a quick solution, aquarists often turn to fish that eat snails, like puffers or clown loaches. These may initially be an easy fix, but most don’t consider tank size and which fish they can actually accommodate in the long run, which leads to even more problems. Luckily, there is another option: assassin snails.

Keep reading for more information on assassin snail care and their effectiveness when dealing with snail infestations in your tank!

The freshwater assassin snail is typically found throughout southeast Asia, ranging from Malaysia to Thailand. They are also found on the island of Sumatra in Lake Toba. Assassin snails do not have a preferred body of water–they are found in many types of freshwater streams, ponds, and smaller ditches–but favor a soft substrate to bury themselves in. As a small carnivorous snail species, assassin snails hide until food is sensed and don’t tend to feed on any plants around them. Usually, these snails are least active around midday but will emerge specifically to eat.

Because of their growing popularity in the aquarium trade, the assassin snail has become an invasive species and is being discovered in many new locations. Their increasing populations may come to threaten many other species of freshwater snail because of the external predation.

Their conical, yellow, and dark brown striped shell makes the assassin snail an attractive small addition to any aquarium and earns them the bumblebee name. Occasionally, their shell may lack stripes, but this is rare. They can grow to a maximum size of around 1.25 inches (3.2 cm), although this seems to vary depending on the amount of food available and size of the aquarium. Because of this, the maximum size of assassins in the wild is often larger.

Like many other snail species, the assassin snail uses a siphon that can usually be seen sticking out of the shell to breathe. However, they do not directly breathe air like many other snails. They have an operculum that keeps predators out of their shells when they want to retract their ‘foot.’

Assassin snails are not a hermaphroditic species, so telling males and females apart is not really possible. If wanting to breed assassins, make sure to get larger groups so there is a good chance you get both female and male snails for your tank.

Although they don’t really group together in a tank, keeping at least 3-4 assassin snails is usually recommended for any aquarium setup. There seems to be a bit of confusion about the minimum tank size for them, but 10 gallons (38L) should definitely be enough for a group that size with some room for additional fish! Assassin snails are very easy to care for and will thrive in any mature tank with stable water parameters. Just don’t get more than your tank size can handle.

This is also one of the few snails that you don’t have to worry about your plants getting eaten, as greens are not part of their natural diet! This makes assassin snails ideal for any small planted aquarium with community fish that won’t try to pick at them. It is also not recommended to knowingly house assassins with other snails, especially their favorite treats: trumpet snails (Melanoides tuberculata)and ramshorn snails (Planorbarius corneus).

Because assassin snails naturally bury themselves and wait for their prey to appear, a sand substrate is preferred, although it’s not a must. The water should ideally not be too soft, as this could lead to deterioration of the shell. As with all tropical fish and invertebrates, the aquarium should be properly filtered, heated, fully cycled, and free of ammonia and nitrites.

How long do assassin snails live for?

As with any invertebrate, any trace of copper in your tank will prove to be fatal for your assassin snail, any eggs that may have been laid, and for any plants. If there is not enough calcium in your aquarium, your assassin snails will also suffer. Unlike hermit crabs, they grow their own shell and require calcium to do so. While their diet, that should include a wide variety of food, will provide some of the nutrients they need, you can also test your water for calcium levels and dose accordingly if needed.

As long as all water parameters and nutrient levels remain stable, you should have no problem keeping your assassin snails alive for a couple of years with minimal care.

If you’re thinking about introducing assassin snails into your aquarium, keep in mind that they don’t just eat pest snails. Although not all sources agree on whether they will also devour ornamental nerite snails and even large mystery snails, you should definitely assume they will and avoid keeping them together in your tank. In fact, assassin snails will eat about any type of food that smells appealing in the water column: planaria, fish eggs, and according to some aquarists, even the occasional dwarf shrimp fry.

This means that if you’re breeding your fish or shrimp and want to avoid any risks, you may want to skip assassin snails. Larger tankmates that require the same water values are fine, as long as they’re not snail-eating fish. Good compatible fish are guppies, small tetras, danios, and less aggressive barbs. Loaches and other bottom-feeding fish should especially be avoided as snails are their favorite snack!

Popular aquarium setups involve a species only tank, with an assortment of plants and a group of assassin snails bringing color and excitement to the bottom of the tank. Other than for a display tank, these snails can also be fed to larger fish. Tanks with just assassins are especially appealing as you can specifically monitor their diet and the food they eat, making sure your larger fish get a quality meal!

As mentioned before, assassin snails do not strictly feed on just other snails. While they can wipe out entire populations of pond snails, ramshorn snails, and trumpet snails, they are opportunists that will eat anything that makes its way to the bottom of your tank. This means live prey, deceased tankmates, commercial fish foods, and frozen foods are viable meal options to supplement in your tank.

To feed a steady supply of assassin snails once the initial pest population is gone, you can ask your local aquarium store for smaller snails or breed snails in a small separate tank as described here. However, there is no need to worry if you do ever (temporarily) run out. Feeding your assassins other protein-rich foods, such as bloodworms or brine shrimp, is fine as well!

Although they will quickly flock to any food that is traceable through the water, assassin snail behavior is very different from that of most herbivorous snails. They don’t move around foraging and grazing on the sides of the tank; their hunting process is quite calculated and interesting to watch!

When they’re hunting for live snails, assassin snails will bury themselves into the substrate whenever possible and wait with just their proboscis (feeding tube) sticking out. When an unsuspecting victim gets close enough to assassinate, they emerge and start to feed. If there is no sand substrate available to bury in, assassin snails will often actively move around the aquarium while searching for other snails to devour. However, this is most likely very stressful for your snails as they have nowhere to hide; it is always recommended to have a substrate or plants for your assassins to hide in!

Fortunately, while breeding assassin snails is not very difficult, it’s not as easy as breeding pest snails. That would make for two snail infestations! If you do end up with more assassins than you can house after a while, it’s usually not too difficult to find another aquarist or aquarium store willing to take a few for a snail infestation in their own tank.

As mentioned before, assassin snails are not hermaphrodites where both sexes can reproduce. Instead, only the female can reproduce, which means a lot less offspring than other types of snails. Because the two snails look exactly the same, get a big enough group to have a good chance of introducing both sexes into your tank.

As long as there are plenty of snails or other nutrient and protein rich foods available, the assassin snails in your tank will take it from there. The male and female assassin snail will connect for up to 12 hours during this time. You should then soon see light colored, square shaped eggs appear that should hatch in about a month’s time. After hiding for a while among plants and in the substrate, the baby assassin snails will join the adults during feeding time in about six months.

When buying assassin snails, make sure to look for snails that are actively moving around, eating, or stalking prey throughout the aquarium. If the operculum is closed, there may be something wrong with the snail. A flaky looking or deteriorating shell is a sign of calcium deficiency, which may be too late to reverse. If you’re ordering assassin snails online, be sure to look for a trustworthy seller with plenty of good reviews like InvertObsession!

When introducing your snails into their new tank, make sure you acclimate them properly so they can slowly adapt to the different water values just as you would with other fish and invertebrates. Skipping this step means a lot of stress for the snails, which can unfortunately sometimes be fatal!

Although assassin snails do a great job at keeping aquariums snail free, their striking stripes and interesting feeding behavior also make them a great addition to tanks without a snail problem as well. They are fun to watch when hunting and do well in a wide range of water conditions!

If you have any more questions about keeping assassin snails or want to share your experiences with them in your aquarium, make sure to leave a comment below. Happy snail keeping!