Do Assassin Snails Eat Shrimp? Only if They Ca Catch Them! 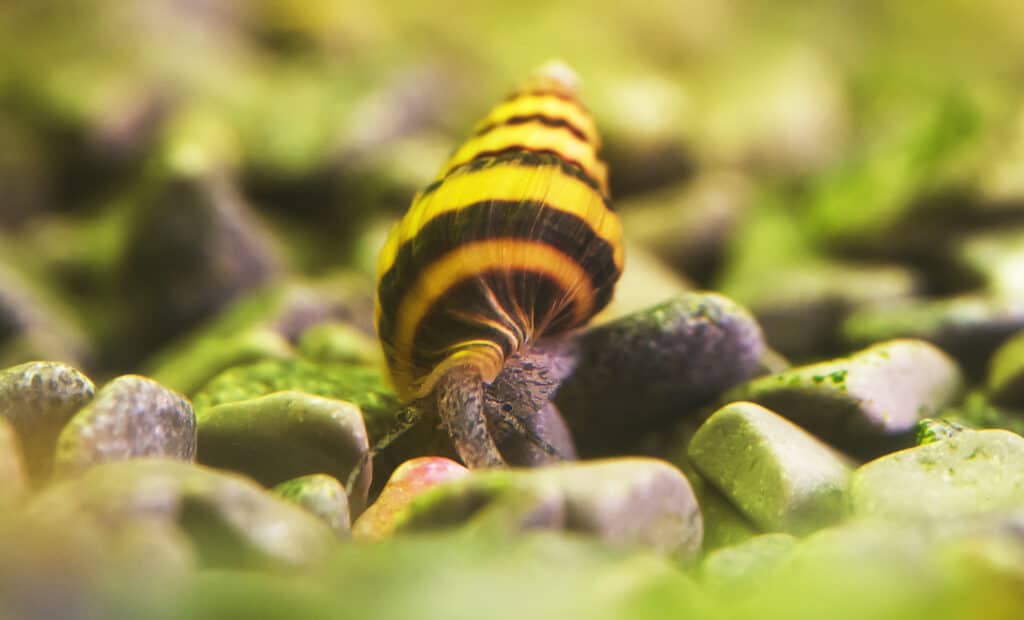 Shrimp and snails can make an excellent cleanup crew, so many freshwater fish keepers like to keep a few invertebrates in their community tanks to help keep the habitat clean and free from general detritus. Usually, that’s a great idea, and these peaceful creatures can also make good companions for aggressive fish, such as bettas.

However, Assassin snails can be the exception to that rule.

How so? Well, Assassin snails are carnivorous predators known to eat small shrimp.

Read this guide to learn more about the Assassin snail and find out if you can safely keep these creatures with crustaceans in your aquarium.

What Is An Assassin Snail?

Assassin snails are also known as Bumblebee snails because of their markings. Clea helena or Anatome helena, to give this snail their scientific names, are often added to small fish tanks by hobbyists who want a creature that will eat pest snails.

These freshwater snails are generally found throughout Southeast Asia, including Malaysia and Thailand, and also occur in Sumatra, specifically in Lake Toba. Assassin snails inhabit many different types of water bodies, including lakes, ponds, streams, and ditches. In fact, the snails’ only preference is a soft substrate in which they can bury themselves.

These small snails hide until they sense a prey item passing by. Then they swiftly attack. Interestingly, Assassin snails are diurnal, emerging from their hiding places specifically to hunt and feed, but they are typically most active around the middle of the day.

Another reason for the Assassin snail’s popularity in the hobby fish tank is its appearance.

These small snails have beautiful conical shells, usually striped in dark brown and yellow, that give the mollusk the appearance of a bumblebee, hence the snail’s other common name.

Assassin snails grow to a maximum size of around 1.25 inches, depending on the tank size and the quantity of food available to them.

Assassin snails won’t bother your fish or plants in a community tank. That makes these snails a perfect choice for a small aquarium containing a community of fish that won’t hassle the snails or regard them as a food source.

However, these attractive, innocent-looking snails should not be housed with other snails, especially Ramshorn snails (Planorbarius corneus) and Trumpet snails (Melanoides tuberculata), both of which are at the top of the Assassin’s menu!

As previously mentioned, the Assassin snail is a predatory invertebrate, and one of its favorite meals is shrimp.

However, the good news is that these murderous mollusks don’t prey on every kind of shrimp and have particular preferences. That said, you should know that Assassin snails will attempt to eat any shrimp species if they are hungry enough.

So, yes, Assassin snails do eat shrimp. However, most hobbyists report that these snails only eat dead shrimp rather than hunting mature live ones unless there’s not enough food in the tank to sustain them. After all, a healthy shrimp is more than capable of outrunning a snail.

That said, Assassin snails can be extremely helpful in controlling shrimp populations in a community tank situation by eating tiny baby shrimp. Once the shrimp reach maturity, it’s improbable that the snail will be able to catch and kill them. So, your tank won’t end up overrun by shrimp, and those left to mature will be the strongest, healthiest specimens.

What Do Assassin Snails Eat?

So, if an Assassin snail’s favorite foods include dead, sick, or dying shrimp and certain species of pest snails, what else can you feed your Assassins?

Assassin snails are opportunistic feeders that will make a meal out of pretty much anything that finds its way to the bottom of your aquarium.

That can include leftover food, deceased fish, and certain live prey, including other small snails. To ensure your Assassin snails don’t go hungry, you can supplement their diet with most frozen meaty foods and commercial fish foods, including flakes and pellets.

These carnivorous critters also appreciate the inclusion of some live bloodworms and brine shrimp in their diet as a preferred food source.

In addition, if you initially added a couple of Assassin snails to your tank to clear out a pest snail population, you can ask your local fish store for a few tiny snails, or you can breed common pond snails in a separate dedicated breeding tank and add a few to your community tank to keep the Assassins happy.

Interestingly, although Assassin snails will prey on other snail species, they are not cannibalistic and won’t kill and eat each other.

How Do Assassin Snails Hunt?

As well as feeding on carrion and leftover fish foods, Assassin snails are predatory hunters. These animals hunt in two ways, as described below.

The Assassin snail’s most popular hunting method is to ambush its prey.

The ambush technique is the hunting method most frequently employed by Assassin snails. The snails burrow into the substrate and lay in wait for prey with their extended proboscis sticking out. As soon as the victim is near enough, the snail grasps the unfortunate creature with its foot.

The Assassin snail uses its rasping radula to penetrate the prey’s shell or carapace. The radula acts like a kind of scouring pad, slowly scraping away the victim’s flesh and weakening it until it dies.

The second method of assassination used by the snails is the crawl-and-catch technique.

The snails crawl across the substrate and follow the prey until they get close enough to catch it. The target is subdued with the snail’s foot and then eaten as described above.

There is no truth to the rumor that Assassin snails use a toxin to immobilize their victims. Animals that use venom to incapacitate their prey usually attack fast-moving creatures that would otherwise escape. Since Assassin snails prey on other snails, sick or injured shrimp, and carrion, they do not need fast-acting venom.

Can Assassin Snails and Shrimp Ever Be Tank Mates?

So, you know that Assassin snails sometimes eat certain species of small shrimp, feed on dead shrimp, and can be handy to keep shrimp populations under control by eating fry and eggs.

But does that mean the two species can never make good tank mates?

Well, it turns out that you can keep Assassin snails with certain varieties of shrimp. Provided that the type of shrimp you keep are large, healthy, and active, they can stay safe in the company of Assassins. Some owners have reported success when keeping the following shrimp varieties in the same tank with Assassin snails:

Of course, if you decide to keep shrimp with your Assassin snails, you must ensure that your snails are well-fed and have a constant, appropriate food supply to keep them satisfied.

Did you enjoy our article about keeping Assassin snails and shrimp in the same community? If you did, please share it!

Although Assassin snails will sometimes eat shrimp, that’s usually only if the shrimp in question is already dead, dying, or injured. The snails will also eat shrimp eggs, and fry, helping to keep the population under control.

That means you can keep Assassin snails and shrimp in the same tank, provided you ensure your snails are well-fed. Hungry snails are far more likely to go after shrimp than those with access to plenty of suitable food.

Do you keep shrimp with Assassin snails? Tell us how that works in the comments box below!