How To Care For The Large Rabbit Snail 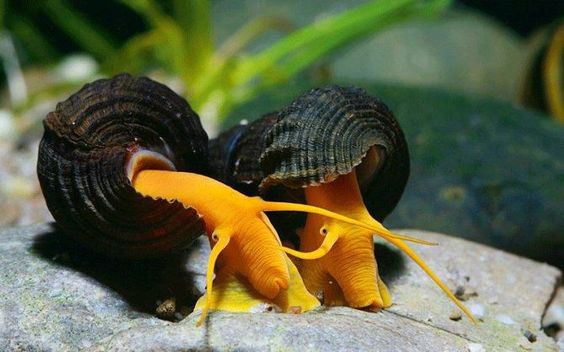 Ornamental snails can make a decorative and entertaining addition to your aquarium community. In this guide, we take a look at the popular and widely available Rabbit snail.

Rabbit snails are easy to care for and exhibit some unique behaviors that can be fascinating to watch. You can also breed your own rabbit snails in your aquarium if you want to.

What is a rabbit snail?

Rabbit snails, scientific name Tylomelania, are freshwater snails that make a useful and interesting addition to a community aquarium.

Also known as Elephant snails, the Rabbit snail grows up to around 5 inches in size, gradually increasing in size as the animal ages. They can live for up to three years if care for properly.

Rabbit snails are very active creatures, spending their time exploring and wandering around their environment. The snails are scavengers, cleaning up any leftover food from the substrate and grazing on certain species of algae.

Don’t panic if you see a Rabbit snail lying motionless on the bottom of the tank. That’s not uncommon behavior for these generally active snails. While resting like that, the snail’s body will be curled up into the shell, and its operculum will be pulled into the aperture. That is perfectly normal snail behavior and doesn’t mean that your Rabbit snail is dead or dying.

Rabbit snails come in different colors and patterns, including red, green, blue, and dark chocolate. The most popular and readily available variant is the yellow rabbit snail.

The snail has a long, spiral, cone-shaped shell with a grooved pattern that extends from the apex of the shell to the aperture.

Rabbit snails have a small operculum that they use for defense, although that only covers a small portion of the aperture. The operculum is a plate that the snail uses to close and open its shell. The structure resembles a large nail when the shell is closed and can be used to determine if the snail is healthy and alive. If the snail dies, the operculum falls off, and if the snail is sick, the operculum does not close properly.

The snail has a large, yellow foot, which it uses to move around the tank.

The snail’s head is extremely important for the creature’s health and wellbeing. The head has two large tentacles that the Rabbit snail uses to sense its environment and locate items of food. Directly behind those tentacles are the snail’s eyes that it uses to detect light and movement. Both sets of tentacles work together, finding food and providing an alert when predators are around. If the snail sees a predator, it will retreat into its shell and close the operculum until the coast is clear, and it is safe to re-emerge.

Below is the second pair of tentacles that are used for feeding, together with the snail’s mouth. There’s also a siphon on the side of the snail’s head that is used to pass water through the gills.

Rabbit snails are pretty easy to look after. As long as you provide them with the right conditions and diet, your snails should thrive.

When introducing Rabbit snails to your tank, you need to remember that they do count as members of the community, and they do take up space!

A tank of 30 gallons or more is best if you’re going to keep a few snails.

Finally, make sure that your tank has a well-fitted lid and cover slides. Rabbit snails have been known to escape from their tank, only to end up on a dry floor where they dehydrate and eventually die.

Snails can be injured by sharp rocks and gravel, so be sure to provide plenty of flat, smooth surfaces around the floor of the tank so that they can move freely and safely. Use a soft, sandy substrate that won’t cause discomfort to the snails as they crawl across it.

Decorate the tank with robust plants, driftwood, and some caves where the snails can hide. Avoid using Java ferns, as it has been reported that Rabbit snails do have a tendency to eat it.

Rabbit snails are a tropical species of aquatic snail, so they need to live in a warm water environment.

The ideal water temperature for Rabbit snails is a wide range between 750 to 850. Snails need to live in water with a relatively high pH level of between 7 and 8 to avoid damage to the snails’ shells. If your fish don’t tolerate water with that pH level, you can feed your snails a calcium supplement instead to boost and protect shell condition.

Lighting should be kept on the subdued side if possible, as snails don’t like bright light. That’s why you will often see your rabbit snails hiding beneath rocks or amongst plants.

Be extremely careful when using plant fertilizer or any form of fish medication that contains copper. Snails are highly sensitive to copper and some fertilizer components, and you could risk killing your rabbit snails if you introduce these products to the aquarium.

Rabbit snails can be vulnerable to injury by canister or power filter intakes. Your snail could easily become caught by its head or foot in the slots of the filter intakes. In that case, the snail could be unable to free itself and may be seriously injured or even killed.

To protect your Rabbit snail from damage, be sure to keep the filter intakes covered with coarse, sponge pre-filters.

Rabbit snails will graze on the algae that grow on surfaces within the aquarium, as well as foraging for scraps of uneaten food that drift down to the substrate.

However, you will need to supplement the snails’ diet by feeding them. Fish flakes, pellets, lettuce, spinach, algae wafers, green beans, and kale are all good food for freshwater snails.

Rabbit snails will eat dead and decaying plant matter, but they won’t damage robust species of live plants. That said, it’s best not to use fragile plants such as Java moss, as the Rabbit snail has been known to eat it.

Most snails are peaceable creatures, and rabbit snails are no exception to that rule. They will mix happily with non-aggressive fish species and with other different types of snails and shrimp. That said, Assassin snails will attack and eat most other snail species, so it’s best not to mix the two.

It is a good idea to keep a small group of Rabbit snails together, especially if you want them to breed. Also, watching the snails interacting with each other and with their habitat can be very entertaining.

However, be wary of mixing snails with large species of fish that are carnivorous or omnivorous. For example, some species of freshwater pufferfish will overturn snails to rip out the flesh and eat it. Also, fish species, including Oscars and Cichlids, should be avoided, as should crayfish, all of which can be aggressive and view the snail as a meal.

Unlike some species of snails, Rabbit snails are not asexual.

Rabbit snails don’t tend to lay vast amounts of eggs like some snail species do. A female rabbit snail typically carries one to three eggs and will gradually release them one at a time. Each egg contains a fully-formed young snail that will quickly get into the routine of moving around the aquarium and foraging for food.

Rabbit snails are generally easy to find in many good fish and aquarium stores. Snails are generally inexpensive to buy compared to fish, and you can also breed your own relatively easily if you only want to buy a few to start with.

When choosing Rabbit snails to buy, look carefully to make sure that the snail shell is undamaged and free-from cracks or pits in the surface. Check to see that the snail’s tentacles are intact and undamaged. Sometimes, if the Rabbit snail has been kept in a display tank with nippy fish, it can be injured.

Also, remember that the Rabbit snail grows larger as it ages, potentially reaching a size of around five inches. So, be sure to choose smaller specimens, not big ones, to ensure that your snails are youngsters with a reasonable lifespan.

Just like every aquatic creature, Rabbit snails are susceptible to some diseases and health issues. In this part of our guide, we take a look at the problems you are most likely to encounter when keeping a Rabbit snail.

Some wild-caught, imported specimens may come with passengers in the form of leeches. If you discover leeches using one of your snails as a host, it’s time for some drastic snail care!

If you see small brown “tentacles” waving around beside the snail’s head or moving under the edge of the shell, it’s most likely a leech. You may also find leeches appearing in commercially produced snails that were originally bred from wild specimens that passed on the parasites to their offspring.

To kill the leeches, remove the snails from the aquarium and immerse them in a salt solution made from 1/2 teaspoon of salt in a cup of tank water for ten minutes. That irritates the leeches so that they leave the snail host, but the treatment doesn’t upset the snails. Repeat the procedure the following day and then two months later until no more leeches appear.

From time-to-time, you may discover that one of your snails has been injured and may have lost all or part of a tentacle.

The tentacle, and even a damaged eye, will eventually regenerate without the need for treatment. During the recovery time, you should leave the snail alone but continue to provide food.

Some keepers have reported that their snails lost the operculum. It’s uncertain why that injury should occur, and one would expect it to be very distressing for the snail. That said, once again, the robust snail will regenerate its operculum.

Unfortunately, accidents do happen, and sometimes a Rabbit snail will suffer a damaged shell.

More serious breakages can be repaired, although the process is rather fiddly and not guaranteed to succeed. Check out this link to a helpful site with an article on shell repair.

In this section of our guide, we answer a few of the most commonly asked questions about Rabbit snails.

Q: What do Rabbit snails eat?

A: Rabbit snails are herbivores. They eat algae, decaying plant matter, and various other forms of greenery, including lettuce, kale, zucchini, and algae wafers. You can also feed your snails flake and pellet foods, although the snails will most likely vacuum up any leftover food that’s drifted down from above.

Q: How big do Rabbit snails get?

A: Rabbit snails can grow to around five inches at maturity. When looking to buy a Rabbit snail, always choose small specimens, as these are youngsters who will live longer than older ones.

A: Yes, Rabbit snails do burrow, especially if you have a sandy substrate. Burrowing is good in that it helps to aerate the substrate, preventing anaerobic hotspots and enabling plant roots to push through compacted substrate more easily.

A: Assassin snails cannot be trusted not to kill and eat any other species of snails, even if the Rabbit snail is a large specimen.

Rabbit snails can make a great addition to a peaceful community aquarium.

The snails are surprisingly active and entertaining to watch. Also, they graze on algae, leftover food, and other detritus, helping to keep the tank clean and preserving healthy water by removing substances that would otherwise decay and release nitrites into the water column.