The Best Betta Fish Species To Keep In Your Tank 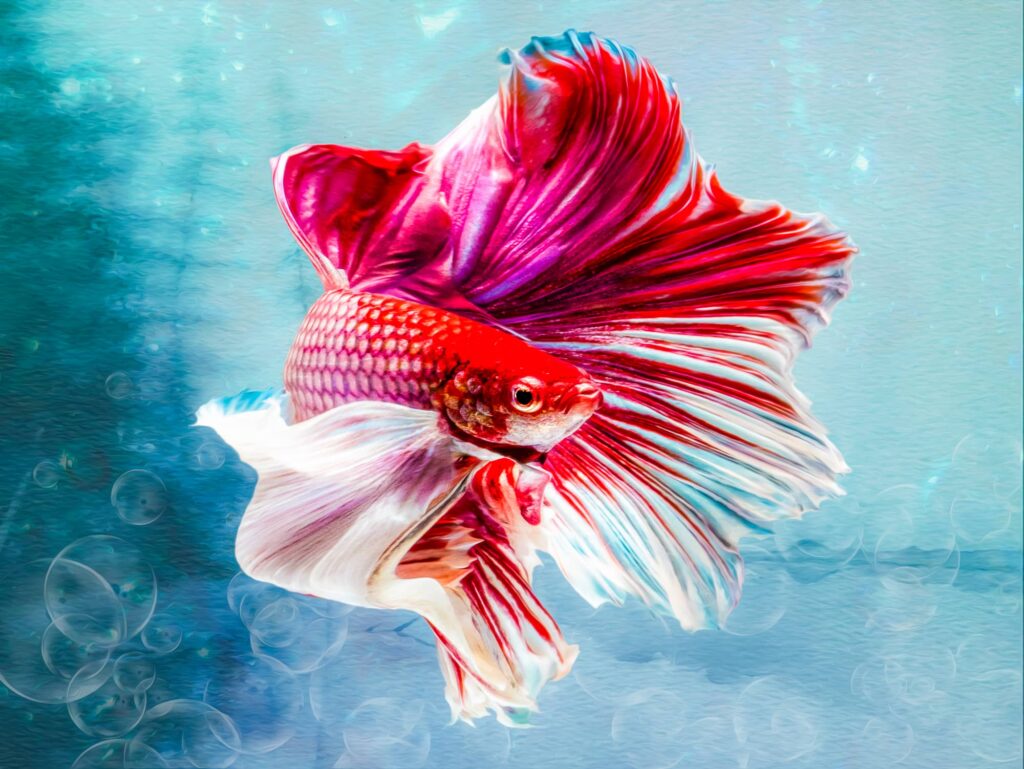 After the traditional goldfish, bettas are just about the most popular choice of pet fish on the planet. Bettas are intelligent, interactive, colorful freshwater fish that come in a dazzling array of beautiful forms, making them much-loved by aquarium hobbyists.

So, what’s not to love about a betta fish?

But there are so many different kinds of betta fish, how do you know which is the best betta fish for you?

Read this guide to find out.

What Are The Different Types Of Betta Fish?

Betta fish are also commonly called Siamese Fighting fish in the aquarium trade. That’s because of their temperament and origins.

Male bettas are a naturally highly territorial species of fish that will attack any other male bettas that enter their patch. Male betta fish will even attack other fish species that are brightly colored or have flowing finnage, apparently mistaking the interloper for a rival betta. Bettas come from Thailand, formerly known as Siam, where the fish live in rice paddies, ponds, and other slow-moving bodies of water.

The betta fish’s aggressive temperament was exploited by farmers who pitted the fish against each other, wagering on the fight’s outcome. In some parts of Asia, betta fighting is still a common practice. However, such events are illegal in other parts of the world, including the US and Europe.

Today, these beautiful aquarium fish are kept as pets. Bettas can learn to recognize their owners, learn simple tricks, be surprisingly interactive, and be beautiful to look at.

Bettas are labyrinth breathers that need to breathe atmospheric air through their labyrinth organ, as they can’t extract the dissolved oxygen they need from the water.

How Are Bettas Classified?

Although most pet stores sell these colorful fish, there’s an astounding variety of bettas to choose from. In fact, there are so many variations of bettas that the species is divided into several different classifications.

Bettas are classified by their tail shape, patterns, and coloration. A betta’s tail can have enormous variation, ranging from short and flat to long and flowing. Also, the betta’s body patterns can vary from single body patterns to multi-colors and marbling. But the incredible color variation that the fish displays makes the betta fish so popular in the aquarium hobby.

When you look at the hundreds of different betta variations available, you can see that every fish is unique. So, you can be certain that the fishy friend you choose to take home as your new pet will be one of a kind!

So, now let’s take a look at those different classifications.

When choosing the best betta fish for you, the fish’s tail is probably the most appealing feature, after its color.

Bettas are classified by the size and shape of their tails. Tails can be large and flowing, spiky, or short and powerful.

Crowntail bettas were first produced in Indonesia by fish breeder Ahmad Yusuf around 25 years ago.

The male fish’s fins are long and spikey, giving a crown-like appearance. However, if the webbing between the tail’s rays reaches over two-thirds of the way up the caudal, it’s called a Combtail betta.

As with most betta varieties, female Crowntail bettas have shorter tails and duller colors than males.

Veiltails are a very common betta variety that you’ll see in pretty much all pet shops and fish stores. Males have long, flowing tails, and they come in many beautiful colors.

Female bettas are much plainer in appearance with lighter colors and lack the extravagant finnage of the male. If you fancy breeding betta fish, you should know that Veiltail is the most dominant genetic trait.

Plakat bettas are very similar to wild bettas, with a stocky body and short, round fins. Captive-bred Plakats come in many different color morphs, unlike their wild relatives’ drab greens and browns.

Plakats were originally used for fighting and are powerful, agile swimmers. That’s something to bear in mind when choosing tank mates for your betta fish.

Halfmoon betta fish have a tail that creates a large half-moon shape, hence the fish’s common name. These attractive betta fish first appeared in the 1980s and are very popular with exhibitors at betta shows.

Halfmoon betta fish are known to be somewhat more aggressive than other varieties, and they are more challenging to breed, too.

Double Tail bettas are quite unusual and not commonly found in fish stores. These tropical fish have a split tail and longer, larger dorsal fins with short bodies.

The Dumbo or Elephant Ear betta has two huge pectoral fins that give the fish the appearance of an elephant. These fish come in a range of striking, bright colors and patterns, too.

Unlike most other betta variants, the Dumbo betta is found in the wild, but its colors are relatively dull: gray, brown, and dark green.

Delta Tail bettas take their name from the Greek letter “Delta” since the fish’s caudal fin resembles the Greek letter (?). The betta’s tail tapers toward the body, widening at the edges to make the shape.

There’s also a Super Delta variant with a tail that can reach a flare of 180 degrees. In both varieties, the tail has smooth edges.

Rosetail bettas are a variation of the Halfmoon betta, but in this case, the tail has a total spread of over 180 degrees. The Rosetail has a very branched tail, giving the appearance of a rose in full bloom.

The tail is exceptionally branchy in some cases, creating an extravagantly ruffled appearance. Fish with those characteristics are commonly called Feathertails.

The Round Tail betta is very similar in appearance to the Delta variety. However, the Round Tail has fully rounded tail edges, whereas the Delta does not.

The Spade Tail betta is so-named because its tail resembles the spade symbol on a deck of cards (?).

The Over-Halfmoon betta is a more extreme variant of the Halfmoon, where the tail’s spread is more than 180 degrees around the fish’s body.

Although these are undoubtedly beautiful fish, they are very poor swimmers. So, you must bear that in mind when housing an Over-Halfmoon betta. Choose a shallow tank so that the fish can make it to the surface to feed and breathe through his labyrinth organ.

Half-Sun bettas were created by selectively breeding Crowntails and Halfmoons. The Half-Sun’s caudal fin extends over 180 degrees around the body and has slight crowning among the webbing and rays.

You can find betta fish in solid colors or patterns. The most common betta colors are red, blue, green, black, copper, pink, and pretty much every other rich color of the rainbow!

So, here are some of the colors that you can choose from when selecting your beautiful betta pet.

There are many different shades of blue betta fish to choose from, ranging from turquoise to electric blue and every variation between.

However, the most common colors you’ll find are steel blue and a vibrant, iridescent royal blue.

The Black Orchid betta fish variation is a beautiful fish that sometimes present blueish or purple accents to the overall base body color.

Red is the most dominant color category of betta fish, ranging from a striking and full-bodied red color to a faded, almost pinkish shade. Red also appears as a highlight across the fish’s fins or as part of a pattern on the body.

Pink bettas have a brilliant, intense pink color right across their bodies. Often, pinkish-purple colors leach into the fins, too.

There are variations of this unusually colored fish, including an almost translucent fish where the color pink is created by the fish’s flesh shining through the skin.

If you want a very rare betta fish, the Rose Petal betta is the one to look for. These fish come in a wide range of color variants, although you generally see them in copper, electric light blue, or dark blue with a darker colored face.

Yellow bettas are also quite a common color variation. These fish usually show a bright, rich, full-body color that extends to the caudal and fins. Different shades of yellow are available, from vibrant to a more subdued, subtle shade.

White bettas can be just as stunning as their brilliantly colored cousins! These fish are entirely white, including their fins, and they come in all the different tail types we mentioned above.

Pure purple bettas are pretty rare and difficult to find.

You can often find these fish in blueish purple, coppery or blackish purple, and rich violet shades. More commonly, you find fish with purple bodies but faces or fins of another color.

When it comes to patterns and tail types, you’re spoiled for choice.

Green bettas are surprisingly rare, even though green is one of the wild betta’s natural colors. Most captive-bred green bettas are more turquoise than genuinely green. So, if you find a true green-colored fish, it’s likely to cost you a lot of money!

Interestingly, the fish’s green coloration is often hidden underneath a darker coloration, but you can reveal the green shade by shining a light on the fish.

Mustard Gas bettas are bi-colored variants with different colors between the fish’s fins and body.

Generally, these fish have a dark body in either blue or green, fading to orange or yellow fins, hence the betta’s name.

The final classification of these popular freshwater fish is by patterns. Patterns are formed by using colors in combination with other shades that appear across the fins and body of the fish. They have usually been created through many years of careful crossbreeding.

The fish’s body has a bright, full color with body scales that resemble a dragon or lizard. The Dragon Scale’s base color is usually deep red or blue with iridescent, paler scales across the top.

Butterfly bettas are quite common, with very distinctive color variations.

These fish have a solid body color. The fins are an iridescent, paler color, usually transparent or white. Sometimes, you can find a variation of the Butterfly betta where the body is one solid color, and the inside of the tail and fins is another color that fades to transparent or white around the fins’ edges.

Marble bettas are tremendously popular in the hobby and come in many fantastic color combinations.

Marble bettas have an irregular, rather patchy appearance on top of a solid body color. Finnage can be marbled or solid and translucent. Because of a genetic quirk, Marble bettas change color over time, sometimes from week to week.

Koi bettas are a version of the Marble betta, again created through selective breeding. The color patterns of a Koi betta resemble those of the popular Koi pond fish.

There’s no distinctive coloration for Koi bettas. The colors and their brilliance vary widely from fish to fish, with every specimen being unique.

Betta fish are incredibly popular pet fish, partly because of their friendly, interactive personalities but primarily due to the astonishing range of amazing colors, patterns, and tail types that the fish come in.

You can choose from extravagant tail forms that resemble roses in bloom to long, flowing caudals that look like floating veils. Then there are metallic, iridescent fish, with solid or patterned colors in every color of the rainbow to pick from!

So, what kind of betta fish did you choose in the end? Was it the betta fish that got you interested in the aquarium hobby in the first place? Tell us about your betta buddy in the comments box below.