Rosetail Betta: The Downside Of Beauty 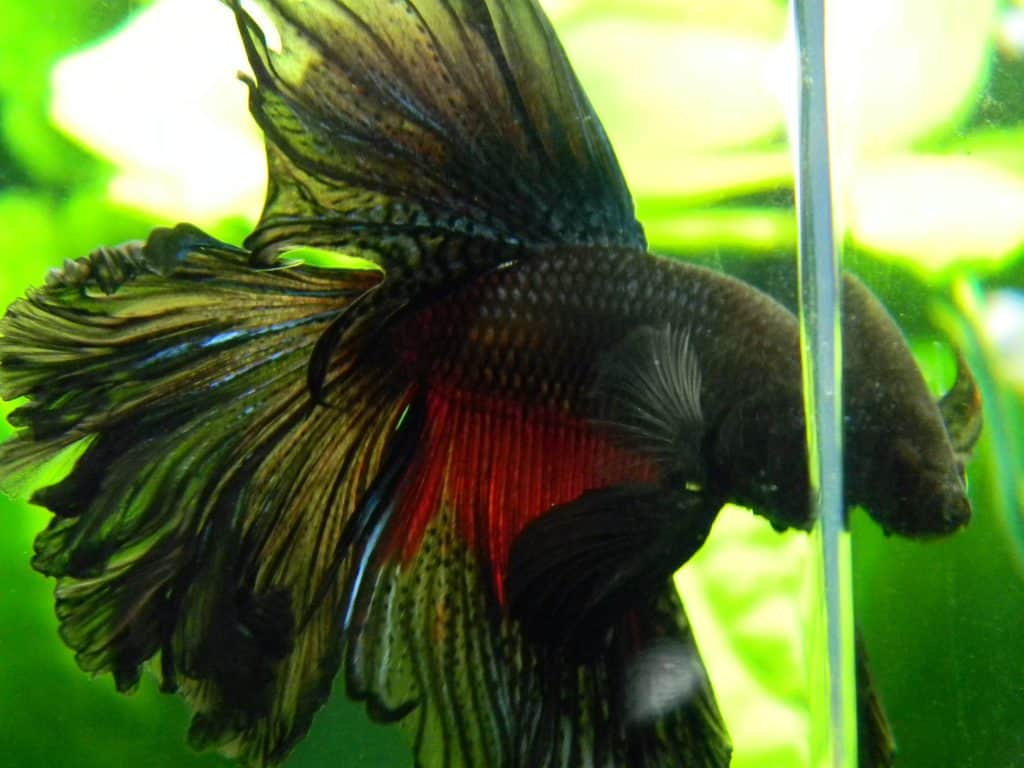 Betta fish are one of the most popular pet fish worldwide today, second only to the traditional goldfish. There are many different variations of betta fish. But sometimes, those stunning looks come at a cost to the fish’s health and welfare, and unfortunately, that rings true with the beautiful rosetail betta.

So, what’s so bad about this type of betta? Should you buy a fish with this tail shape?

Keep reading to get the full lowdown!

What is a rosetail betta?

A rosetail betta is basically a halfmoon betta with extra branching in the fin rays, especially on the caudal fin. That causes the fish’s tail, or caudal fin, to spread beyond the 180-degree mark in some cases. Sometimes, the caudal overlaps with the betta’s other fins.

The spreading tail gives the fins a rose-like appearance. In extreme cases, the tail appears almost feather-like. Hence the fish is sometimes referred to as a feathertail.

That certainly makes for a beautiful betta fish, which explains why these creatures are so popular.

The rosetail betta variant was developed in 1989 by the well-known betta breeding team of Rajiv Masillamoni and Laurent Chenot. These fish were not officially given the name “rosetail” until breeder Jeff Wilson joined the team in 1991. Jeff is also credited with coining the term “halfmoon.” So, rosetails have actually been part of the aquarium trade since the late ’80s and early ’90s, although they’re still among the varieties of bettas that are considered relatively new.

When these bettas were first seen in halfmoon spawns, they were considered undesirable mutations since they were unable to spawn and were also weaker than other halfmoons. However, even though rosetail bettas were not used for breeding purposes, they were exhibited at an IBC convention during the early ’90s, being presented as blonde-diamond halfmoons.

Rosetails are incredibly popular with betta fans these days, but originally, these freaky fish were used by betta breeders to quickly improve the tail spread of their progeny. However, now, rosetails and feathertails are specifically bred to be sold commercially, and you can generally find plenty of examples of these types of bettas for sale on sites like Aquabid.

But of all the different betta tail types, there are a few reasons why aquarium hobbyists should think twice about buying a rosetail betta.

So, what’s so bad about rosetail betta fish?

The examples of rosetail bettas that you see in photos and videos are usually strong, young fish whose fins are not yet fully grown. These fish might look great, but that’s not the full story.

Rosetail betta fish generally develop serious health problems as they get older, leading to a miserable life for these aquarium fish.

All betta breeds like to take rest periods throughout the day. That’s why many owners buy betta hammocks and hollow floating betta logs for their pets. Resting is a natural betta behavior and shouldn’t give you cause for concern.

However, a list of bettas that develop extreme finnage, including halfmoons, rosetails, and feathertails, are severely hampered by their spectacular flowing tails. Their very distinct tails become so heavy and cumbersome that the tiny fish find swimming so energy-sapping that they often end up resting on plant leave or just sitting on the bottom of the tank.

Plus, senior bettas become weaker as they age, making swimming even more of a challenge.

The ever-popular betta fish are labyrinth breathers, which means they boast an evolutionary quirk that allows them to breathe atmospheric air at the water surface.

In fact, no variety of betta fish can extract all the oxygen they need from what’s dissolved in the water, so they must visit the surface regularly to top up their oxygen reserves by breathing air.

So, if your fish is so weighed down by its tail and other fins that it doesn’t have the energy or strength to swim to the water surface, it could even suffocate.

Look carefully at your betta fish (which is sometimes called a Siamese fighting fish), and you’ll notice that it has an upturned mouth filled with tiny teeth. That’s because bettas are surface feeders. In the wild, water-bound insects make up a large part of the betta’s diet. The betta waits below the water surface until a mosquito or some other unlucky insect settles on the surface. Then, the betta grabs the insect and hangs onto it with its teeth so its lunch can’t fly away.

In the captive environment, domesticated bettas visit the water surface to take floating betta pellets or other foods you’ve offered them. If the fish can’t swim to the surface easily because its finnage hampers it, there’s a good chance that your betta will go hungry or even starve.

If your betta struggles to get to the water surface to breathe and feed, it will quickly become stressed.

Stress is extremely dangerous for all fish species, as it weakens their immune systems, leaving them open to attack by parasites and bacteria.

Look closely at your betta’s tail and other fins, and you’ll see that there are fine, hair-like bony structures that hold the webbing of the fin together. At the end of the fin, the rays spread out or branch. That’s perfectly normal. However, fish that are bred to develop abnormally spread tails have rays that are correspondingly more spread out than usual.

That excessive branching produces a bigger tail, which puts more weight onto the rays. When the tail becomes excessively heavy, the rays can no longer hold the weight and sometimes break. If that happens, the whole tail collapses.

Once that happens, the beautiful rosetail effect is usually gone, and you’re left with a crippled betta fish with collapsed fins that is usually unable to swim properly.

Sometimes, in an attempt to decrease the handicapping weight of their tails so that they can move and swim more easily, rosetail bettas resort to biting their tails.

This distressing habit sees the fish using its teeth to bite off parts of the caudal fin. That greatly increases the risk of bacterial conditions like fin rot, so you must keep the tank super-clean if you spot your rosetail biting his tail.

Most betta fish breeders think many of the betta varieties with spectacular finnage are not as strong and healthy as regular betta splendens and plakats.

Often, rosetail bettas are the smallest of the fry. In pursuit of bigger and more impressive finnage, imperfections are often ignored, and that can lead to poor scaling (body scales incorrectly lined up, for example) and other bad conformation.

How can you help your rosetail betta?

If you have already fallen for the charms of or rescued a rosetail betta, you might run into one or more of the problems that we mentioned above. So what can you do to make your betta buddy’s life happier and more comfortable? Read on for a few rosetail betta fish care tips!

Some betta keepers opt to trim the tail of their extravagantly finned bettas. However, we do not condone that practice, as it’s likely to be painful and distressing for the fish.

Also, there’s the risk that the betta’s damaged fins will become infected. Bacteria can enter the fish’s body through the wounds on its fins, potentially setting up an infection that could eventually kill your fish.

Except for plakat bettas that have shorter fins than the betta splendens long-finned varieties of the species, regular bettas don’t appreciate too much water movement in their tank.

In the wild environment, bettas live in slow-moving or stagnant waters where the current is minimal or non-existent. As previously mentioned, long-finned bettas like rosetails struggle to swim as their finnage grows, and too much water flow makes matters even worse. Your fish will certainly become stressed if it struggles to swim, and it could even be injured if the current throws your pet against the glass or tank decorations.

However, your betta tank does need to have a filtration system to keep the water clean and safe for your fish. So, what can you do?

The easiest way to protect your betta is to baffle the filter outflow to deflect the current. That won’t affect the circulation of water around the tank, which is essential for a healthy environment for your fish. However, baffling the outflow will make life more comfortable for your betta buddy.

To baffle the filter, you can:

Alternatively, you might want to consider swapping your current filter setup for a HOB, sponge filter, or canister system.

One of the betta traits we mentioned earlier is that the fish needs to visit the water surface frequently to feed and breathe air. That’s going to be tough for your pet if it lives in a tall tank and is struggling to swim to the top.

If you have a tall tank, then, you might want to consider replacing it with a long one. Bettas don’t generally need a vast amount of swimming space, although they do appreciate a tank with enough room to patrol their territory.

Betta fish are pretty intelligent creatures, and they do get bored in a plain environment without any decorations and toys to explore and play with. However, it’s very easy for your rosetail betta fish’s extravagant finnage to become snagged on items of tank décor. So, by all means, include a few caves, overhangs, floating logs, and the like, but be sure not to clutter the swimming space too much and present a hazard for your pet.

Also, check any ornaments that you add to your tank to make sure they don’t have any sharp edges that could injure your domesticated betta.

Swimming, when encumbered by a huge tail, is extremely tiring for your fishy friend. So, you’ll need to provide your pet with plenty of resting places.

You can buy betta hammocks that are shaped like a broad leaf and made from soft, safe plastic. They even come with a sucker to fix the hammock to the aquarium wall. To make your betta’s life easier, fix the hammock just under the water surface so that your pet can easily grab food or take gulps of air when it wants to.

If you have your heart set on owning a rosetail betta, you’ll need to know how to choose a good one.

Here’s what to look for:

As explained above, the finnage should never be so extreme that the betta cannot swim properly.

What should I do if my white rosetail betta fish is turning blue or changing color?

White or light-colored rosetail bettas often change color as they mature. So, don’t be surprised if your white or pale pink fish gradually turns red or blue, especially if it had little specs of color on its body when you bought him.

The only kind of white betta that is guaranteed to maintain its color has very thick metallic white scales. However, it’s important to note that the thickened scale gene can mean possible health problems, including tumors, for the fish.

Although rosetail bettas are beautiful to look at with their gorgeous flowing finnage, all that extravagance can spell a life of misery for the fish as it gets older. The fins are heavy, making swimming very difficult for the betta, potentially leading to stress and consequent ill-health.

Also, fish with a genetic mutation, like rosetails and feathertails, don’t generally enjoy a long lifespan and tend to succumb to health conditions as they age.

For all the reasons mentioned above, although these fish are undoubtedly beautiful to look at, we would urge you not to buy one.

73 thoughts on “Rosetail Betta: The Downside Of Beauty”