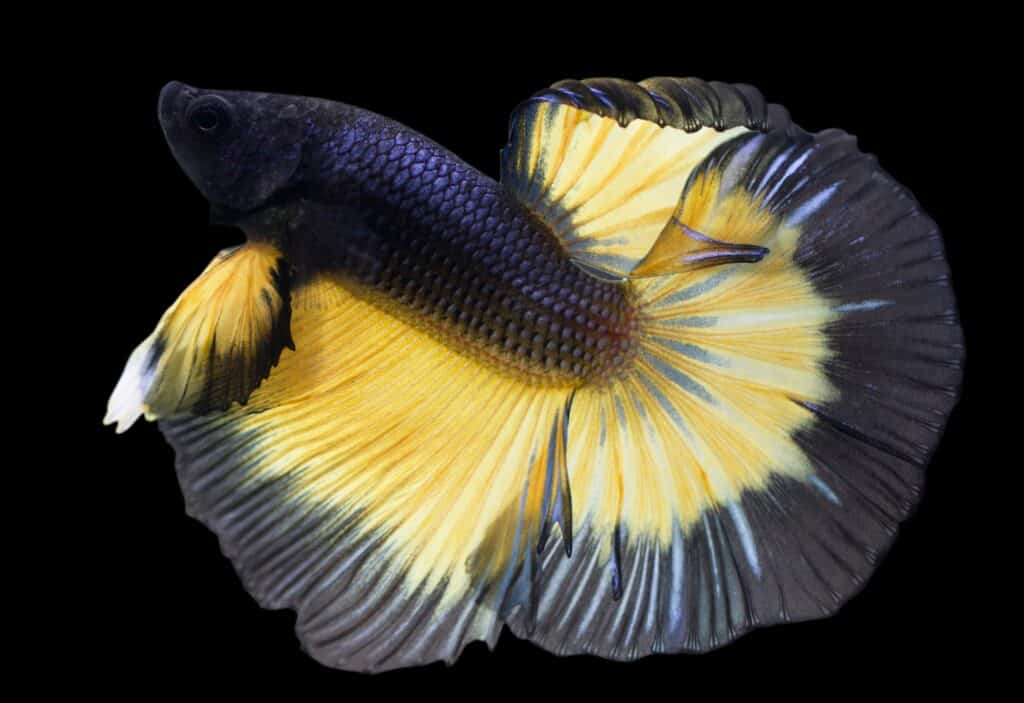 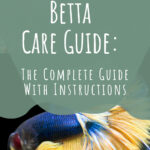 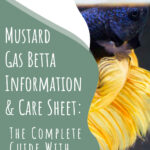 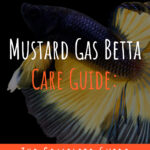 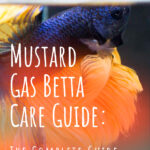 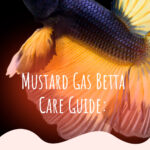 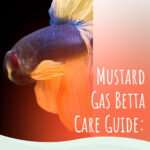 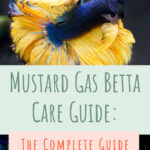 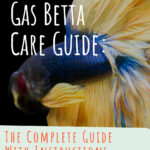 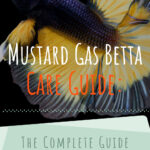 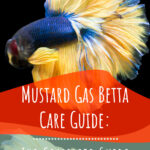 Betta fish come in many color morphs and forms, making them an extremely popular choice of aquarium fish with hobbyists worldwide.

In this guide, we take a detailed look at the beautiful mustard gas betta, including how to care for the fish and where you can buy them.

What is a mustard gas betta?

The mustard gas betta is an absolutely stunning form of the betta fish. These fish are bi-colored or, in some cases, multi-colored bettas, having different colored fins and bodies.

The fish’s body is typically dark in color, usually blue or green. The flowing finnage is usually orange or yellow, with the color spreading outward from the body in cloud-like waves, hence the variety’s name.

Sometimes, the variety is incorrectly referred to as chocolate, as the fin color is similar. However, the chocolate version of the betta has a brown body. You may also find the mustard gas betta called the paradise betta, but that’s just another name for the same variety.

Bettas of this species generally grow to around three inches in length as a maximum, although many are smaller than that.

The growth rate of your fish depends on its genetic makeup and lineage.

Betta fish can be expected to live for between three and five years, although they can survive for longer than that in some cases. Your pet’s lifespan will depend to some extent on how well you look after his tank and the quality of the diet you give him.

This betta first appeared in 1999 when a United States breeder called Jude Al introduced the fish to the hobby. According to Al, it took 13 years to produce his “pure” betta. Most of these fish are now produced by cross-breeding or through imitation.

This species is mainly bred in Southeast Asia, and most betta enthusiasts concur that the current stock is much diluted from the original fish.

In a nutshell, yes!

A mustard gas betta that’s directly descended from those that were originally bred 20 or so years ago is an incredibly rare find. Most of the fish you see these days are bred from one male mustard gas betta and a female of another species.

Many of the fish you find advertised as a mustard gas betta are merely bi-colored fish with tail coloration and tones similar to the genuine mustard gas fish.

In many ways, it’s a good thing that hobbyists began out-crossing this betta species, as that means we now get to see this rare fish in many different and gorgeous colors.

Blue was the main body color of the first mustard gas bettas, and it’s still about the most commonly seen today. This color looks stunning, especially when contrasted with the fish’s characteristic mustard-colored or orange tail.

If you find a green-bodied example of this fish, you’re in for a treat! The brilliant green sheen sometimes extends into the caudal fin, making this color variation of the betta a breathtaking addition to aquariums.

The black-bodied mustard gas betta is an absolutely beautiful fish! The deep black shade of the creature’s body provides a stark contrast to the mustard fins, as does the black outline of the caudal fin.

The dragon scale is a rare mutation of the mustard gas betta in which the scales have a metallic sheen. This color morph is most often seen in blue, although green fish are found occasionally, too.

The main feature of the mustard gas betta is the color of its tail and other fins. There’s no standard tail form for these fish, which means that there are plenty of tail forms to choose from. Many breeders focus on producing fish that have a particular type of tail, so it pays to shop around online dealers to find what you want.

Half-moon is the most commonly found tail type of mustard gas betta and is carried down from the original examples of this unusual fish.

The full moon betta has a tail that looks much like that of the half-moon, although the circumference of the tail exceeds 180 degrees.

The delta tail initially looks very similar to the half-moon, but the shape is more triangular when fully stretched.

The rose-tail is a variation of the half-moon tail shape. This form has many skin folds that give the tail the appearance of rose petals overlapping each other.

The commonly seen veiltail drapes downward like a veil, as its name implies.

Like the male of any betta fish species, the mustard gas betta is highly territorial and will be extremely aggressive toward other males. This species doesn’t do well when kept with fin nippers who would make a meal of the betta’s fins.

Bettas are quite active swimmers, spending much of their time patrolling their home patch. These fish make wonderful centerpiece specimens and can share a tank with a few small, peaceful companions that don’t bother the betta. Bottom-dwellers such as Corydoras catfish make good tank mates.

Betta fish are not especially demanding when it comes to their care. However, you do need to provide your fish with a large enough tank; bowls and vases are not suitable for betta fish to live in! So, you need to invest in a tank that works for your betta, like those featured in this article.

Bettas are surface feeders, and they are also labyrinth breathers, periodically needing to get to the water surface to breathe. Also, mustard gas betta fish have luxuriant, flowing heavy fins. So, a shallow tank is best for these guys so that they don’t need to expend too much effort in swimming to the water surface.

Wild bettas can jump when they need to move around between water bodies during the dry season. Domesticated bettas can jump, too, so you need an aquarium with a cover slide or lid.

Clean water is very important for your betta fish. So, you need to install an efficient filtration system in your pet’s tank.

You’ll also need to carry out partial water changes each week and deep-clean the substrate with an aquarium vacuum.

Although bettas are classed as omnivores, their natural diet consists primarily of meaty protein in the form of insects and insect larvae, augmented by a small amount of plant matter.

You should feed your betta a basic diet of betta pellets and tropical flake with frozen or live bloodworms, daphnia, brine shrimp, and other meaty proteins. Ideally, you should feed your fish twice daily, offering only what the betta will eat in a couple of minutes.

Also, you should include one day per week when you don’t feed your fish at all. That fasting day allows your fish’s digestive system to process the food in it without becoming overloaded and blocked. Constipation and bloating are common problems seen in betta fish, which can be prevented by including a fasting day in your pet’s weekly feeding regimen.

Where can I buy a mustard gas betta fish?

Mustard gas betta fish are extremely popular, and they are also in short supply. That makes this species of fish somewhat difficult to come by.

Specialty betta breeders are the best place to buy these rare fish. Check out Pinterest, other social media pages, breeder’s blogs, as well as online auctions, although you then have the potential hassle of international shipping to contend with.

You may occasionally find mustard gas bettas for sale in fish stores, although these are often fake and not the genuine article. That said, if it’s just the look of the fish you want, then breeding and genetics may not be a priority for you.

Mustard gas bettas vary in price, depending on their coloration and tail form. However, we found this species for sale online from around $30 and upward.

The mustard gas betta is a lovely and rare color morph of the ever-popular betta fish.

As they are very difficult to come by and can be expensive to buy, you’ll need to make sure that you give your aquarium fish the very best care to maximize his lifespan. Check out the other articles on our sister site, bettasource.com, to find out how to give your betta fish the very best of care.