Rainbow Shark vs Red Tail Shark! Which One’s Right for You? 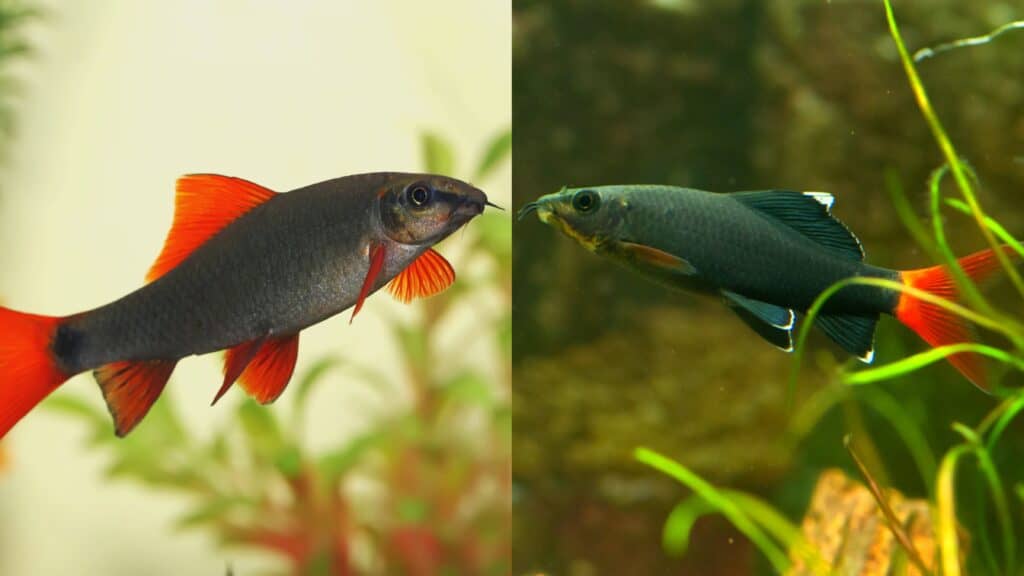 Rainbow Sharks and Red Tail Sharks are very similar, so they are easy to confuse. While they are two separate species, they share lots of similarities in behavior, diet, and habitat, but they also have some specific differences.

Read on to find out the similarities and differences between these two lively species.

What Do Rainbow Sharks and Red Tail Sharks Look Like?

Rainbow and Red Tail sharks both have black body colors. A Rainbow Shark’s fins are red to bright orange. The Red Tail Shark has black fins and only has red on its tail fin, hence the name. Both species also have a torpedo-like body.

These fish aren’t actually “sharks”. Both species belong to the Cyprinidae family, just like minnows. They are named “sharks” because of their dorsal fin on the top of their body which gives them a shark-like appearance.

Their physical differences are the easiest ways to tell these two types of fish apart.

The identification of males and females of Red Tail Sharks is a bit more difficult. Females are usually larger than males with a grey stomach that is rounder. Males have black stomachs with flatter shapes.

Origins Of Both Species

Both the Rainbow and Red Tail Sharks are endangered in their native waters and more of them exist in the aquarium trade.

Red Tail Sharks are very active and need lots of space. They can become territorial during feeding, so it’s best not to feed them near other fish. They typically don’t nip at other fish but will chase other adult fish for hours and exhaust them and cause them to die.

Juvenile Rainbow and Red Tail Sharks are calmer and tend to spend a large amount of time hiding. They generally show more dominant behavior as these fish mature.

Both sharks spend most of their time at the bottom of the tank eating algae.

Water parameters are another commonality between The Rainbow and Red Tail Shark. Here are the water conditions ideal for both species.

Both of these species are very active and semi-aggressive, so they need lots of space. A minimum 55-gallon aquarium is ideal for one shark and other community tank fish. If you plan on keeping multiple sharks with other community fish, a minimum of a 75-gallon tank is needed.

Because of their active swimming ability and semi-aggressive attitude, they need lots of space. A longer tank is also recommended because these fish are horizontal swimmers. This amount of space is recommended to keep territorial behavior to a minimum.

A tank lid is also necessary because these species of fish do jump. These fish also need a good filter with a medium water flow.

These tropical freshwater fish also need a heater to keep the water temperature at an appropriate level to imitate tropical waters. Sharks love to dig in the substrate, so any substrate with large particles isn’t recommended. Sand is the best substrate for these trendy aquarium fish.

These species also prefer lots of alone time, so they need lots of places to hide like tunnels or caves. Hollow decorations are also a great option.

Plants are also a welcome addition to a tank with sharks. They provide additional hiding places and oxygen to your aquarium. Medium lighting is important for an aquarium with sharks because they don’t like bright light.

Both Rainbow Shark fish and Red Tail Shark fish are omnivores. A balanced diet for them would include frozen foods, cut-up vegetables, brine shrimp, algae wafers, and sinking pellets. They also feed on tank algae and debris within the substrate. These fish eat at the bottom of the tank so no matter what you feed them, make sure the food will sink or try to feed your sharks separately from your other fish to prevent territorial behavior.

Sharks need to be fed once or twice per day. Just like in other fish, overfeeding can lead to swim bladder disorder.

Both of these sharks don’t cope well with fish that look similar to them. It’s best to keep a single shark in a community tank or in a group of six to eight sharks.

Just like other fish, sharks are prone to common diseases. These include:

The swim bladder controls the fish’s ability to stay upright and float. Swim bladder disease will cause your fish to be upside down, float abnormally, or lie on the bottom of the tank. This is caused by overfeeding, rapid eating, gulping air with eating, digestion problems, poor water quality, shock, infection, or trauma.

Fin Rot is a condition where the fins start to decay and tear away. Fin rot is typically caused by poor water conditions. Other factors like the stress of fish, tank overcrowding, aggressive tank mates, and more can contribute to fin rot. Fin rot is caused by bacteria either from your tank water or from an injury.

Parasites like Ich or Velvet are contracted from infected fish usually when adding new fish to your tank environment. They are heavily contagious parasites that multiply quickly. Ich can be seen in the form of white spots all over your fish. Velvet turns the body of the fish a dusty brown color.

Which Shark Species Is Better?

Which shark species is better for you depends on the fish keeper. Red Tail Sharks are generally not recommended for beginners because they are more aggressive than Rainbow Shark fish. The Rainbow Shark fish tends to do better in community setups.

They both have the same tank requirements, dietary needs, and other conditions, so which shark is right for you depends on the ease of care you would prefer and whether you’re looking to keep a community tank or not.

Can I Keep a Rainbow Shark With a Red Tail Shark?

Do Rainbow Sharks Get Aggressive?

In an aquarium environment, Rainbow Sharks are semi-aggressive and may attack other fish. They are very territorial and will defend their territory even against other Rainbow Sharks.

What Sharks Can Live With Rainbow Sharks?

There aren’t any sharks that can live with Rainbow Sharks. They do well with smaller schooling fish and other community fish, or other Rainbow Sharks.

What Sharks Can Live With Red Tail Sharks?

Red Tail Sharks also don’t do well with other sharks. The only shark they can live with is the Bala Shark because they are so different in terms of size, appearance, and temperament.

Both Rainbow and Red Tail Sharks are great aquarium tank cleaners that can bring a lot of joy to your tank. Which one is better for you depends on your level of experience, what kind of tank you’d like to keep, and ease of care. The most important factors are making sure that you provide the proper tank size, tank mates, and water requirements to keep your shark healthy and happy.