Guppies and Betta Fish – Do They Make Good Tank Mates? 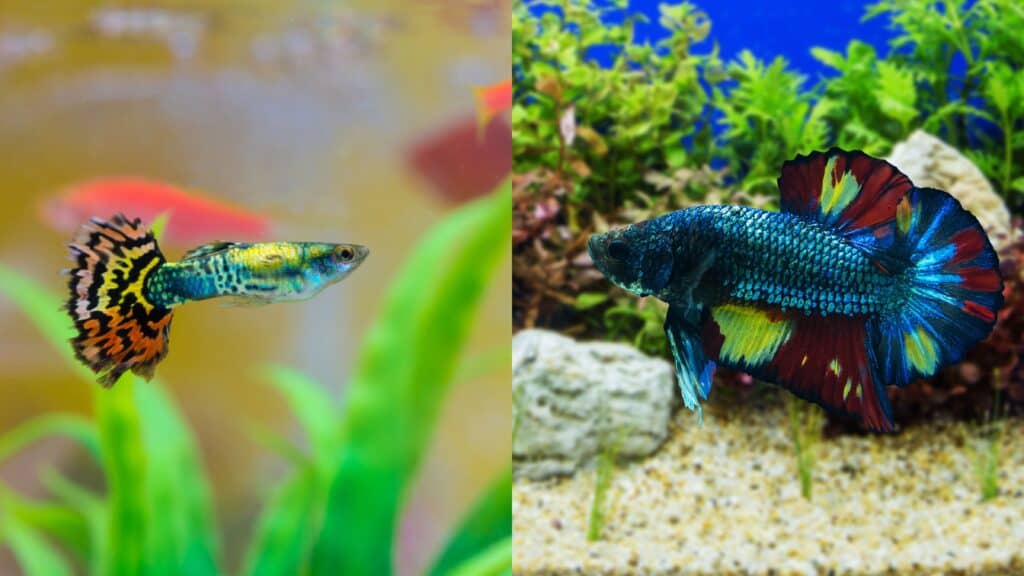 So, you have some colorful Betta, and you’d like to add some Guppies to your tank. Can Guppies and Bettas thrive in the same aquarium? The answer is yes but there are several factors you’ll need to consider.

Read on to learn about everything you need to know about keeping Guppies and Betta together.

Bettas and Guppies have many differences and similarities and there are many factors to consider when thinking about housing them together. Let’s explore what those are.

When you plan on combining two groups of fish, you’ll need to make sure the water condition aligns. Guppies originate from South American rivers and lakes and Bettas survive in streams in Southeast Asia.

Gender Of Both Species

The gender of the fish also plays a key role in the fish living together. Male Bettas are very aggressive while female Bettas are less hostile. The same is generally true for Guppies.

Female Guppies are generally less colorful than males, so it is possible to keep them with a male Betta. It’s best to use caution with this combination and find a female that has the least color possible to not trigger aggressive Betta fish.

This is another combination that should be avoided. Male Guppies will often mistake a female Betta for a Guppy and try to breed with them. Although female Bettas aren’t as aggressive this is likely to result in aggression and the death of your Guppy.

How Many Guppies Can Live with Bettas?

If you plan on keeping Guppies with a Betta, you’ll need a big enough tank. As a general rule of thumb, it’s best to have one gallon of water per fish in your aquarium. The more room the better. For example, if you have a 10-gallon tank you can keep a single Betta fish with three Guppies. With each additional 5 gallons, you can add three additional Guppy fish.

A 10-gallon tank is a minimum size to house these two species. 30 gallons or more is a better choice so that each species has plenty of space to live in harmony.

Where In the Tank Do Guppies Live?

Guppies usually live and swim in the middle or the top of the aquarium. If your Guppies swim into your Betta’s territory this could cause some squabbles but if your Betta has an established territory, Guppies will typically avoid that area.

Differences Between Bettas and Guppies

Guppies are usually very active, and Bettas are more sedentary. Bettas can misinterpret the quick swimming of Guppies as aggression, which can cause fights between these two species of fish.

Is A Specific Betta Better to House with Guppies?

There are certain types of Bettas that are calmer than others and could make a better match with your Guppies.

Halfmoon or Deltas are very docile, making them great community fish. It’s best to consider, however, that just like humans, Bettas have their own personalities and the same goes for Guppies.

Also, choosing a Betta that is very similar in size to your Guppies will help prevent aggressive behavior.

Plakats are among the most aggressive Betta fish breeds that should be avoided when choosing a Betta to pair with your Guppies.

Other Factors to Consider

When keeping any two types of fish together there are so many factors to consider. Here are some other factors to think about before housing Betta fish with Guppies.

In any tank, there is a natural hierarchy between individual fish. It’s best to have plenty of hiding places to avoid aggressive fish if necessary. If the fish have nowhere to hide from the aggressor, they will often become ill and die.

Bettas like to shelter in plants and caves also so having plenty of them available is a good idea for a harmonious tank. Plants like Java Moss, Java Ferns, or Guppy Grass are good choices for your tank.

Thankfully, with these two species, breeding isn’t possible. However, if you plan on breeding your Guppies, Bettas are likely to see them as food so it’s best to separate them into another tank or use a breeding box to protect them.

Wait to introduce your Guppies back into the tank until they are large enough not to be eaten by your Betta. As with breeding any species, it’s best to make sure your tank doesn’t become overpopulated and cause poor water quality.

Just like Betta fish, Guppies need a variety of foods to thrive. Luckily, your Guppy will also eat daphnia, bloodworms, and mosquito larvae. Feed your Guppies around three times per day. In addition to those items, Guppies also eat flakes and pellets.

Guppies also survive on algae in your tank. While they aren’t the best algae cleaners out there, they will help with buildup.

Bettas require lots of protein and meat to thrive and are carnivores. Guppies are omnivores. They need both meat and vegetables to thrive.

Guppies tend to be quicker eaters than Bettas so feeding them can be tricky. Follow the tips below when feeding your Guppies and Bettas together.

You might be thinking, can Guppies eat Betta food? The answer is yes but not all the time. Due to their food needs partially overlapping it can be difficult to feed your pet fish together. Here are some tips on how to do this.

How To Feed a Community Fish Tank

Other Precautions to Take Before Housing These Species Together

Besides the factors mentioned above, if you have your heart set on putting your Guppies and Betta together, here are some precautions to take to keep your fish happy.

Keeping these two species together can be challenging, but if you follow our tips, it can be done. Consider the tank environment, size, gender of both fish species, and diet. Consider keeping a tank divider or separate tanks just in case fights occur.