Do Betta Fish Fight? Everything You Need To Know 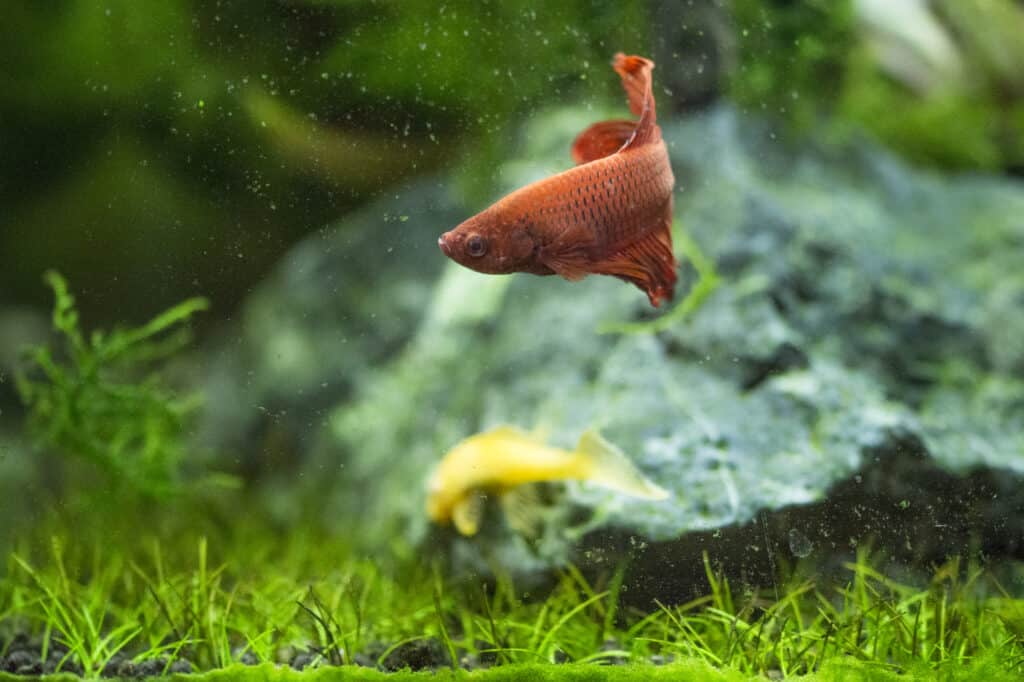 The most common question when anyone keeps more than one betta fish is, “Do betta fish fight?” The quick answer to this question is yes, betta fish will fight.

Actually, I made the dumpiest mistake in my first experience with betta fish! I put two males in the same tank without researching whether or not it was a good idea. They’re little fish; how much trouble could they cause?

Oh, were those bettas ever trouble! They fought all the time! Constantly chasing each other and nipping at each other’s fins.

However, there are some things you can do to stop this behavior. In this guide, I’ll share what I’ve learned from experience and research about why betta fish fight and how you can prevent it.

Do Bettas Fight Other Fish?

Bettas are also known as Siamese fighting fish for their aggression toward other fish, especially smaller ones with brightly-colored scales or long fins.

However, if you add fish with similar coloring or the same size as your betta, they will likely leave them alone.

Do Male Bettas Fight With Females?

Male Betta fish are very territorial, and this behavior also appears in their interactions with their female counterparts.

Often, these beautiful fish pairings end in fights that lead to death. In some cases, the male might harass the female even during spawning periods when she becomes physically exhausted or falls ill.

You should temporarily house male and female bettas together when both are willing to breed and spawn.

Afterward, you have to separate them to prevent possible aggression immediately.

Do Female Betta Fish Battle Each Other?

Female betta fish do fight with each other. However, this doesn’t mean you can’t keep more than one in the same betta tank.

If you want to house more than one female betta fish in the same aquarium, they must have adequate space, or else they will engage in combat.

Also, make sure there are lots of hiding spots since this will aid in preventing fights. You can add live plants, Driftwood, or rocks to create these hiding places.

What Are Betta Fish Fighting Indications?

Knowing the signs of fighting betta fish is essential to intervene and prevent fatalities quickly.

The most common indications are:

Why Do Bettas Fight?

Now that you know the different ways betta fish will fight, let’s examine some of the reasons they engage in this behavior.

Betta fish are highly territorial creatures that live in shallow rice paddies and small streams in their natural habitat.

Because of this, they have developed a fish-fighting instinct to protect their territory from anything threatening, including other betta fish.

Another reason these guys fight is because they are attracted to bright colors and long fins. This is why they are often drawn to smaller fish with brightly-colored scales or those with long fins.

Finally, when your community tank lacks hiding spots, your fish feel like they constantly have to defend their territory. This lack of privacy can cause stress, leading to aggression.

How To Stop Your Betta From Fighting?

As I mentioned before, male bettas are the most aggressive. So, if you want to prevent fighting, keeping one male per tank with an adequate food supply is the best.

This way, your boy won’t need to protect his territory from other fish and will be less likely to show aggressive behaviors.

Avoid Brighter Colored Fish or Those With Long Fins

Bettas tend to resemble other colorful fish with bright scales or with long fins. They might view these fish species as a threat to their territory.

Instead, choose tank mates that are dull-colored or don’t have long fins. This way, your betta will be less likely to nip at their fins or attack them.

Some fish are naturally aggressive and might instigate fights with your betta.

To prevent this, research before adding any fish to your tank. Please make sure they are docile fish and won’t start any trouble.

Here are some suitable betta fish tank mates for bettas:

One of the major causes of fighting is a lack of space. When fish feel confined in such a small area, they will fight for their territory.

To stop your fish from fighting, ensure your betta has a minimum tank size of 2.5 gallons. Thus, they’ll have plenty of space to swim around and won’t feel like they’re in a tuna can!

You can add live plants, Driftwood, or rocks to create these hiding places. Just make sure they don’t have any sharp edges that might injure your fish.

What Are the Risks of a Bettas Fight?

Betta fish fighting can lead to death. As a result, pet fish retailers and keepers keep male betta fish in separate aquariums to make them unable to see each other during the pet fish trade.

In some circumstances, Betta fish fighting is not fatal. Thus, if you don’t see your fish battling, look for these other indications:

How Much Time Do Betta Fish Spend Fighting?

Most betta fish fights will only last two minutes, while others can end immediately.

However, bettas selectively bred for aggression tend to fight much more intensely and often end with one fish being severely injured or dead. These fights can last up to an hour.

In the wild, fights usually end within a few minutes, with one establishing dominance over the other.

Fighting betta fish is illegal. You will be held legally responsible if you purchase equipment for fighting, help advertise the fights, bet on them occurring, or attend these events.

This applies particularly to the United States, Thailand, and other Asian countries.

From a legal standpoint, animal fights are illegal, and so is breeding animals for the purpose of fighting.

Can I Put 2 Male Bettas Together?

You should not put two male bettas together. They are likely to fight and could injure or kill each other.

Can I Have 2 Female Bettas Together?

You can put two female bettas together, but you should still provide them plenty of space and hiding places. They might still fight if they feel like their territory is threatened.

What Is Meant by Flaring?

Flaring occurs when a betta spreads its gill plates to look bigger, usually done to scare other fish. This is similar to how a pufferfish expands and flares its spines whenever it feels threatened.

Bettas are generally solitary fish and do not like to be around other fish. However, this still depends on the individual fish.

Some bettas might be okay with being around other fish, while others will become aggressive.

Do Betta Fish Fight Over Food?

Betta fish can fight over food. To prevent this, you should ensure that each fish has access to its own food. You can do this by spreading out the food in the tank. If possible, the fish should be put in separate tanks.

If two male betta fish meet, they will usually start ramming into each other and trying to bite each other. This can sometimes lead to death.

Do All Betta Fish Fight?

All betta fish fight. However, bettas can have different levels of aggression.

Do Betta Fish Share Their Life With a Partner?

Betta fish do not need a partner. They are solitary fish and can do well on their own. In fact, putting two betta fish together can often lead to them fighting.

Can I Put a Betta Fish in a Bowl?

It would be best not to put a betta fish in a bowl. Bowls do not provide enough space or hiding places for bettas. This can lead to stress and aggression.

Can Betta Fish Be Trained To Fight?

Betta fish can be trained to fight. However, this is considered animal cruelty and illegal in many countries.

Do Betta Fish Recognize Their Owners?

Betta fish recognize their owners. They are intelligent fish that can learn to associate their owner with food and will often swim to the top of the tank when they see their owner.

Bettas are beautiful but can be very aggressive fish. Their aggression levels vary based on provocation. Therefore, you should keep an eye on them.

Remember to provide them with enough space and hiding places. It’s also important to avoid keeping them with other fishes that they might view as a threat.

Finally, be sure not to attend or support any illegal fish fights. These events are inhumane and often result in the death of one or both fish.

I hope this article was helpful. If you have any questions, feel free to leave a comment below.