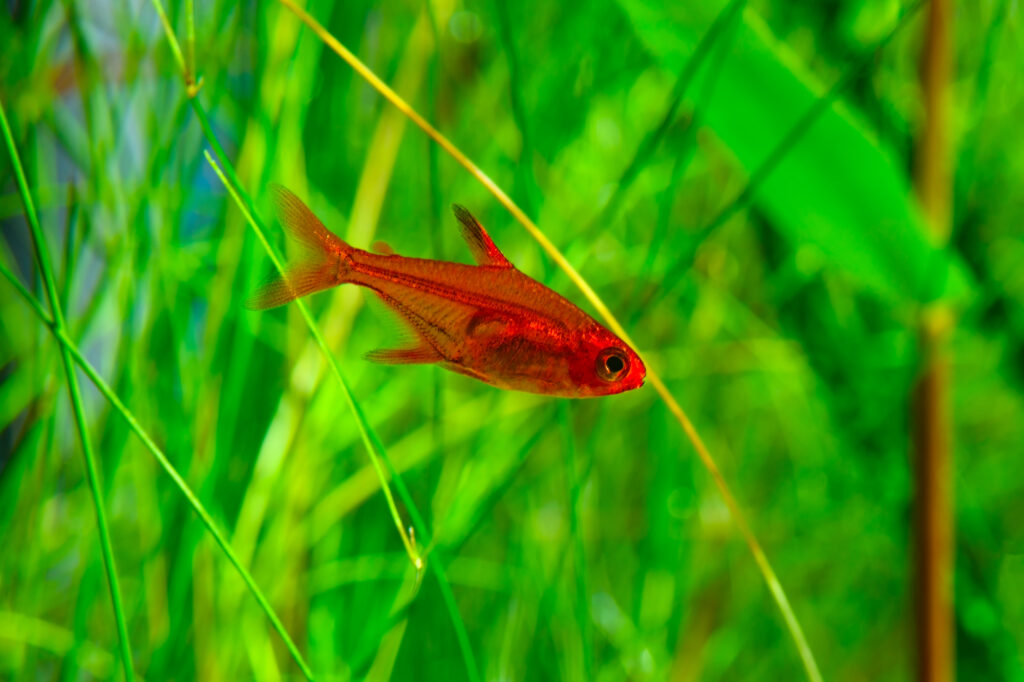 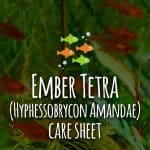 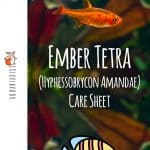 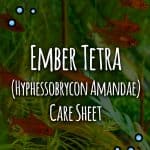 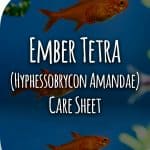 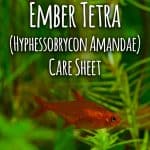 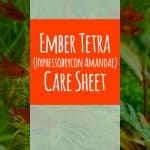 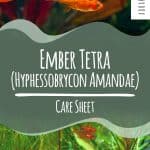 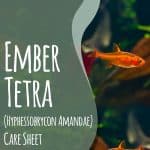 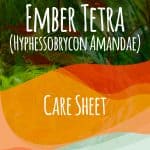 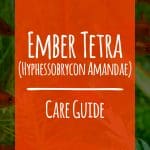 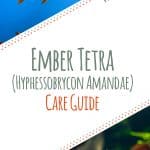 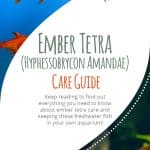 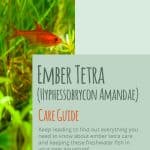 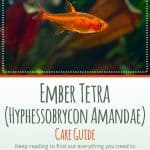 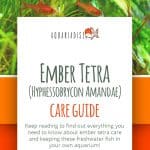 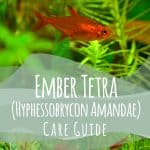 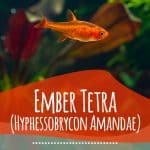 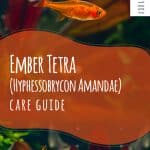 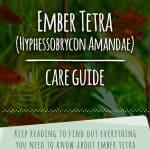 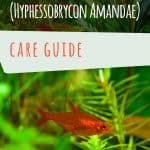 The ember tetra is one of the most colorful and compatible tetra species available in the aquarium trade today. These small and bright fish bring a spark of life to the freshwater aquarium and can be kept with an assortment of other tank mates. They don’t require much extra care and will look spectacular in a planted tank!

Keep reading to find out everything you need to know about ember tetra care and keeping these freshwater fish in your own aquarium!

Hyphessobrycon amandae is commonly known as the ember tetra but may also be referred to as Amanda’s, dwarf reds, reds, or as fire tetras; this species was recently discovered in 1987 and was named after Amanda Behler who was the mother of the founder, Heiko Bleher.

Hyphessobrycon amandae is part of Hyphessobrycon, which contains about 150 different species. However, the actual phylogeny of the genus is very scattered with some classifications based on color and shape alone. Because of this, members of Hyphessobrycon are likely to change species and even genera over time.

Because of their recent discovery, not too much is known about the preferred natural habitat of the ember tetra. It is believed that these fish prefer the blackwater tributaries and streams of the lower Amazon basin in Brazil, mainly those from the Araguaia River. Their exact range within this region is not exactly known, but populations have been confirmed in central and western Brazil.

These areas usually have soft substrate that is often covered in detritus from aquatic vegetation and the overhanging canopy; as this organic material decomposes, tannins stain the water brown and lower the pH. For the most part, there is little to no water movement.

These fish are very easily identifiable due to their bright solid color; ember tetras get their most common name from their warm orange body that seems to almost glow in the aquarium. Their eyes match the color of their body but are outlined in black while their fins tend to be a little darker in general. Ember tetras will only grow to be about an inch (2.5 cm) long when fully grown.

Males usually have brighter and more intense coloration, especially during spawning periods. The female will be duller and will have a rounder abdomen.

How long do ember tetras live?

If kept in ideal conditions, these small fish can live about 2-3 years! These are schooling fish and will tend to live longer when kept in larger groups.

Tetras are some of the easiest fish that you can keep in your aquarium; however, just because they’re small doesn’t mean that they can be kept in a small tank. The recommended tank size for a school of ember tetras is at least 10 gallons (37.9 L), with a larger tank allowing for a bigger school and other species of tetra to be intermixed; a longer tank will allow for more swimming space than a taller one as well.

In order to recreate their natural habitat in the tributaries of the Araguaia River, it is best to go with a blackwater system that is heavily planted. Indian almond leaves may be used to stain the water dark as tannins are released from the leaves; these tannins also provide a bunch of beneficial properties and keep the water more acidic, which you can read more about in our Indian almond leaf guide here. Live plants, especially floating plants, will also help oxygenate the water, provide shelter for the fish, and create its own detritus.

These fish will do best in low water flow where they can’t be easily pushed around while they idle in the water column; it is also important to consider that these fish are very small and can easily be sucked up into filtration if there is no protective barrier. A darker substrate will bring out the beautiful coloration of these fish, but ember tetras will do just fine on either gravel or aquarium sand of any color.

In general, tetras are pretty hardy freshwater fish that can withstand a wide range of water parameters. Ideal conditions would be a stable temperature between 72-82° F (22.2-27.8° C) with pH a little lower than normal, between 5.5-7.0. The water should also be pretty soft, with KH between 4.0-8.0.

How many ember tetras can you have per gallon?

For freshwater fish, the recommended rule is one inch of fish per one gallon of water. While these fish are small, they do like to swim around the tank and move as a group. Instead of having ten ember tetras in a 10 gallon (37.9) tank, it would be better to keep only six or seven as opposed to filling the tank to its capacity with ten ember tetras.

If you have a larger tank, you may follow the rule closer and have about one ember tetra per every gallon as long as the tank is stocked correctly otherwise.

The ember tetra is a schooling fish and will thrive when kept in large numbers. For the most part, these fish keep to themselves, move as a group, and wade together in the middle and upper portions of the water column.

No, ember tetras are simply too small to be overly aggressive. If you do have problems with aggression, try adding more members to the school, and try keeping them in odd numbers. Adding other species of tetra will not help as Hyphessobrycon amandae only tends to school with itself.

While there have been a few occasions where a rogue ember tetra nips at fins, it’s very unlikely to happen. These fish keep to themselves and will usually shy away from other more active fish. However, if you’re experiencing fin nipping, it may be because the school is too small.

An ember tetra school will fit in with most other community fish as tank mates. They like to stay in the middle and the upper water column of the tank, so it is best to plan around this. Some recommended tank mates are:

Of course, these fish can always be kept together in a single-species tank, with a beautiful school of Hyphessobrycon amandae against a backdrop of plants and other vegetation.

Some hobbyists have had success keeping these fish with smaller and less-aggressive species of cichlid since they inhabit different parts of the tank from each other. We don’t recommend this unless you have an extra aquarium to separate the two in case something happens.

Along with being a hardy fish, the ember tetra will eat just about any food that they happen to come across. Ember tetras will readily accept fish flakes, but other high-quality food should be the basis for the diet. Frozen, freeze-dried, and live foods, like brine shrimp, bloodworms, and insect larvae, should regularly be offered in order to keep your tetra glowing brightly.

It is important to keep in mind that these fish are very small and may have difficulty eating bigger pieces of food. If necessary, it is recommended to break up bigger pieces so that your fish can eat the food more easily and faster so that other fish don’t try to steal it.

While Hyphessobrycon amandae is a relatively new species of tetra, their breeding habits seem to match those of other tetra species. The ember tetra is an egg-scatterer, which means that there is no specific area where they need to lay their eggs. The ember tetra will not display any signs of parental care after spawning.

The ember tetra is relatively easy to breed and may even spawn in the display tank without any special treatment if conditions are ideal. In order to regulate the process better and increase the likelihood of your fry surviving to become mature fish, it is recommended to set up a separate breeding tank.

This separate aquarium should have the same parameters as the main display. An egg crate, mesh fabric, or other spawning mat should be used to line the bottom to prevent parent fish from being able to reach the eggs. Plants may also be added to help catch eggs and create a more natural environment. The lighting should be dimmed. A small group of adult tetras can then be placed into the tank.

Slowly begin to raise the pH and temperature until the water is close to neutral (7.0) and the temperature is between 80-84° F (26.7-28.9° C). The parent fish should also be given a variety of high-quality food with a large assortment of live foods.

Once the fish have laid eggs, the parent fish will need to be removed from the aquarium as soon as possible; adult ember tetras will see their own eggs as food and won’t hesitate to eat them! Over the next several weeks, the fry will begin to mature into adult fish. During this time, it is recommended to supplement brine shrimp and other small worms until the fish can accept crushed up fish flake food.

From all the tetras available in the aquarium trade today, Hyphessobrycon amandae is one of the most colorful. The ember tetra can be kept with an assortment of tank mates and is relatively easy to breed for beginners. In order to keep them healthy and happy, it is best to recreate the blackwater conditions naturally found in the tributaries of the Araguaia River.

If you have any questions about ember tetra (Hyphessobrycon amandae) care or have experience keeping these small colorful fish in your own aquarium, don’t hesitate to leave a comment below!