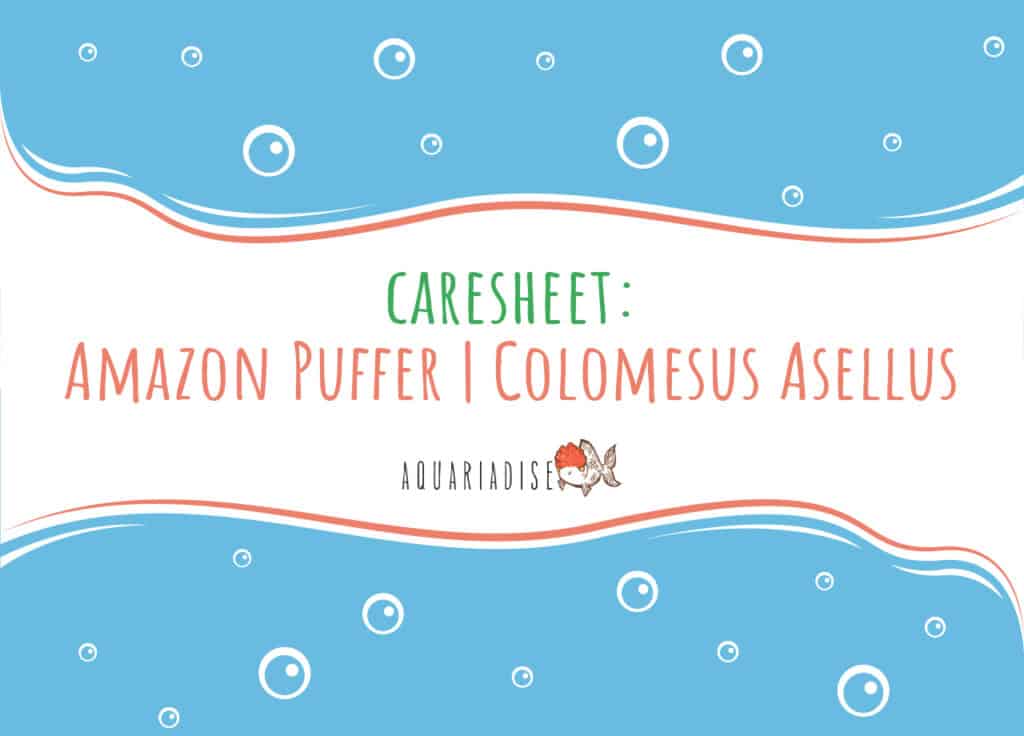 Freshwater pufferfish are what we refer to as ‘oddballs’ in the aquarium hobby: the many species of pufferfish, both marine, and freshwater don’t seem to fall neatly into any of the regular fish categories. Colomesus asellus, also known as the Amazon puffer, is even more of an oddball species than other puffers. Unlike its very aggressive cousins that should always be kept alone in their own tank, it loves the company of its own species and can even be kept in their own sort of community tank setting.

While definitely not a fish species for beginners, the Amazon puffer might be a perfect choice if you’re looking for an unusual fish that few other aquarists keep.

Keep reading for everything you need to know about Amazon puffers and keeping them in your own aquarium!

As its common name suggests, the South American pufferfish is naturally found in the Amazon River and the surrounding basin throughout Colombia, Peru, Ecuador, and Brazil; the Amazon puffer has not been described in French Guiana or Suriname as of early 2020.

Throughout these South American countries, the Amazon puffer has been found at all regions of the basin, the upper, middle, and lower sections, in varying water conditions; these fish have been found near beaches, in floodplain lakes, and in areas with lots of vegetation. They seem to prefer fast-moving water where oxygen levels are high as it is believed they may be more sensitive to low oxygen levels. The water can be soft and acidic or harder with a higher pH.

While some believe that the Amazon puffer can tolerate brackish water conditions, most agree that it is a purely freshwater fish species.

With a maximum size of around 3.1 inches (8 cm), Amazon puffers are one of the smaller pufferfish species available in the fish trade. Beginners might have some trouble distinguishing Amazon puffers from other puffer species, especially when the fish are juveniles. Many have white bellies and yellow-green backs, but luckily they all sport a different pattern. Amazon puffers will have five stripes running across the top of their body: one above the eye, one behind the eye, one behind the pectoral fin, one under the dorsal (back) fin, and one ring right before the caudal (tail) fin.

One puffer that’s especially similar to the Amazon puffer is its cousin, C. psittacus, which is a brackish puffer that grows much larger. It can be told apart by its extra back stripe, smaller eyes, and overall larger size. It’s also not a very popular aquarium puffer so you’re unlikely to come across it in the average aquarium store.

As with most puffers, it’s not possible to tell the difference between male and female Amazon puffers.

Note: Like almost all puffer species, the Amazon puffer is not a beginner fish. If you’re a beginner interested in keeping puffers, consider going for a dwarf puffer instead.

Amazon puffers are sometimes referred to as ‘nice puffers’ because they are one of the only larger puffer species that will tolerate some tankmates and can sometimes be kept in their own type of community tank setting. They are also the only species that should be kept in groups and will actually display signs of stress when kept alone. Get at least three Amazon puffers; more is better for these fish!

Despite their ‘nice’ reputation, Amazon puffers are not suitable for the typical community aquarium. They don’t view other fish as food but are still notorious fin nippers that can cause stress among their tankmates. When they are stressed, these fish are also known to release a toxin that can potentially kill all the other fish in your aquarium. Therefore, a single-species setup is probably still the best idea for this fish. If you really want to keep your Amazon puffers with other fish, go for quick species with short fins or species that spend most of the day in hiding; however, there is a good chance that you may lose them one way or another.

Corydoras are a good example of a sturdy fish that should be quick enough to avoid nippy Amazon puffers, but keep in mind that they might still end up missing some fin chunks now and then.

One of the most important aspects of keeping any puffer, and especially Amazon puffers, is their diet. Amazon puffers are omnivores that naturally eat snails, shrimp, aufwuchs, and anything wiggly, such as mosquito larvae and worms. In the aquarium, their diet should consist mostly of hard, crunchy foods like ramshorn snails, crab legs, and small mussels or cockles. You can also occasionally your fish feed live or frozen foods such as mosquito larvae. Pellet foods might be an additional option; some Amazon puffers will accept algae pellets.

Sticking to these diet rules is important because puffer teeth keep growing throughout their life and the only way to wear them down and keep them from overgrowing is by offering hard foods. Even then, Amazon puffers are known to be especially prone to overgrown teeth and you might still need to trim their teeth occasionally. You read that right: trim their teeth. This is usually done by sedating the puffer using a very small amount of clove oil and trimming off a tiny part of the teeth using cuticle clippers. An Amazon puffer with overgrown teeth is unable to eat and will starve, so be sure to always keep a close eye on those chompers.

Pufferfish are pretty difficult to keep and are very sensitive fish. The reason they’re still so popular in aquariums is because of their fascinating behavior. All puffers, including Amazon puffers, are intelligent, inquisitive, and fun to watch. They will closely inspect anything that enters the tank or gets close to it using their big, curious eyes that can move independently. These fish seem to hover instead of actually swimming and quickly learn to recognize their owner. Amazon puffers are naturally migratory in the wild, which means they are very active and will constantly be swimming, inspecting things and surfing the filter flow.

Because Amazon puffers are so intelligent and active, they do need a lot of enrichment. If you frequently spot your Amazon puffer ‘glass surfing,’ your tank might need some extra decorations or stronger water flow for added entertainment. Try tall plants like Vallisneria to easily break sightlines!

Colomesus asellus have never been bred in the aquarium and the process is still poorly studied in the wild. The eggs are very small and no parental care by either the male or female fish has ever been observed. In their natural habitat, the fry seem to be washed into specific nursery zones where they go through a planktonic phase before growing into ‘real’ fish. These different environmental and water changes make raising them from egg/fry to adult fish in the aquarium pretty much impossible.

If you’re looking for a fascinating fish that proves to be a challenge–but definitely pays off–the South American Amazon puffer may be right for you. These fish are purely freshwater and are quite sociable amongst themselves. While they need a larger tank and a more specific diet, there will never be a dull moment as you watch your puffer explore every nook and cranny of your tank.

If you have any questions about keeping Amazon pufferfish or have any experiences with this fish that you want to share, don’t hesitate to leave a comment below!