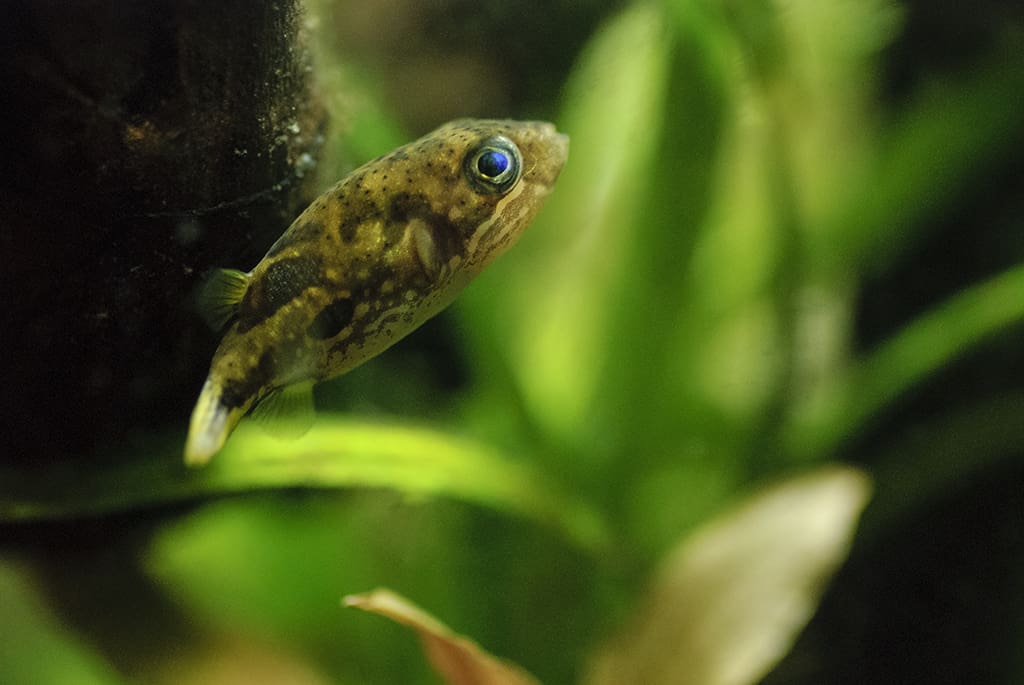 Freshwater puffers are gaining popularity in the aquarium hobby, and for good reason: they are a very intelligent and incredibly fun fish to keep. Unfortunately, there is still quite a bit of confusion out there about which species of puffer belongs in freshwater and which only do well in brackish aquariums, which often results in sick or dead fish and a lot of disappointment.

To help prevent you from choosing the wrong pufferfish species, here’s a list of puffers that are 100% suitable for freshwater aquariums!

Probably the most popular and also the easiest freshwater puffer to keep are dwarf puffers (pictured above), also sometimes known as pea puffers or Malabar puffers. With an adult size of around an inch (~2.5 cm), these fish are the smallest freshwater puffers available in the hobby and can be kept in densely planted aquariums of at least 15.5 inches (40 cm). Dwarf pufferfish are less aggressive than their larger cousins and don’t have constantly growing teeth that need regular care, which makes them a good choice for beginner puffer keepers.

Although choices are still limited due to (fin-)nipping tendencies, these fish can do well in some community aquariums as long as tankmates are carefully chosen. Like all freshwater puffers, they are very sensitive and water quality should be kept at perfect levels at all times.

You can find a full dwarf puffer care sheet including preferred tank conditions and food, as well as breeding methods on Aquariadise here.

Red-eye puffers are a group of four different small puffer species in the same genus as dwarf pufferfish. These freshwater fish all tend to look relatively similar but are easily recognized by their striking red eye color. While not as easy to keep and notably more aggressive than their dwarf puffer cousins, these fish are definitely not the most difficult species as long as care requirements are met.

Because of their aggression level, it’s best to keep these freshwater puffers on their own in a single-species setup (although two or more females can supposedly successfully be kept together). Despite their small size of around 1.8 inches (4.5 cm), the recommended tank size is at least 31.5 inches (80cm) for one red-eye puffer. This is due to the fact that these fish, like all freshwater puffers, are easily bored and produce a lot of waste.

These fish can be naturally found across Asia. C. lorteti is often found in shaded and slow-moving canals and brackish waterways throughout Thailand, Cambodia, and Vietnam, where vegetation is thick. C. salivator is only found in the rivers of Malaysia, more specifically in Sarawak, Borneo; while not much is known about these freshwater puffers, they are thought to prefer fast-flowing water with lots of leaf litter and submerged roots. Even less is known about C. borneensis, but they have been documented living in the same area and conditions as C. salivator, only seeming to prefer slow-moving water instead. And lastly, C. irrubesco comes from the acidic (pH 6.0) brown waters of Indonesia.

In order to best replicate these conditions in a freshwater fish tank, break the sightlines using plenty of tall plants like Amazon sword. Include aquarium-safe branches and driftwood to really make your fish feel like it is in its natural habitat. Don’t forget to use a powerful filter to deal with the messy feeding habits that come along with these species of fish!

Feed your red-eye puffer crustaceans like live snails and shrimp, or frozen food like mosquito larvae. These species are most active during and after sunset, so try feeding with the lights off if you’re having trouble getting your puffer to take food. Setting up a separate freshwater snail breeding tank is a good idea and very easy so that you always have a surplus of readily available food for your fish! Instructions for starting your own snail ‘farm’ can be found here.

Here you can really see the red eye of this fish species!

As one of the only freshwater puffer species that actually live in groups in the wild, the South American puffer (also known as the Amazon puffer) is not an easy fish to keep and not the best choice for beginning puffer keepers. If you’re up to the challenge, though, a group of these gold and black striped fish is really a joy to see.

The South American puffer is very active and loves to swim, which means a large aquarium is in order. For a small group, these fish need a rectangular tank of at least 47 inches (120 cm) with heavy filtration, strong aquarium water flow, and dense planting. Because these freshwater puffers quickly end up with overgrown teeth, hard food needs to be supplemented; crustaceans like large snails (you can breed ramshorn snails yourself), crabs, and mussels should be offered at every feeding.

Even with plenty of hard food being offered you might have to clip their teeth regularly yourself. Postponing this for too long can result in a puffer that’s unable to feed and has permanently lopsided teeth, so choose another species of fish if you’re not prepared to do some pufferfish dentistry.

As with all freshwater puffer species a cycled aquarium, regular water changes, and perfect water values are a must. Other fish, like tetras or Corydoras, are somewhat of a possibility as compatible tankmates as long as your aquarium is large enough and enough food is provided.

You can find a full care sheet for this fish here.

If you’re serious about freshwater puffer keeping, are looking for a puffer that gets very large that you can really bond with, and happen to have a fish tank of at least 60 inches (150 cm)–as well as some large filters lying around–look no further! Fahaka puffers grow to a massive size of up to 16 inches (40 cm) and are very aggressive. This makes them a fish recommended only for experienced puffer keepers. Even then, they are a reasonable alternative to the larger Mbu puffer (Tetraodon mbu), which is only really suitable for public aquariums.

These freshwater puffers are sold in fish stores usually as juveniles, but unfortunately, this doesn’t mean you can start out with a small tank and upgrade later as they grow incredibly fast. Make sure to feed them a diet consisting of crustaceans like snails, mussels, crayfish, and cockles.

As their second common name suggests, these fish come from many countries throughout Africa, including Egypt, Kenya, Nigeria, and Ghana. These freshwater puffers also come from a variety of lakes and rivers, in both open and harbored bodies of water. They prefer heavily vegetated areas but will munch at any aquarium plants that may have food on them.

Watch out for your hands while feeding a puffer of this size. Although a fahaka puffer can be trained to hand feed, it is still a predatory fish that react will very strongly to food and will not hesitate to go for your fingers. It is strongly recommended to use aquarium planting tongs to safely deliver food to your large freshwater puffers.

A fahaka tank should consist of a sand substrate and decorations like plants and driftwood for the fish to hide behind to prevent stress from feeling exposed or bored. Avoid anything sharp, though, as these fish are clumsy! Tankmates are not recommended due to the aggression level of these freshwater fish.

Note: The video below shows this fish feeding on a live crayfish and can be considered graphic.

A little different than most freshwater puffer types, target puffers are not very popular in the aquarium hobby as of now. These fish seem to be most commonly available at this point, but don’t worry if you happen to come across another variety. Care requirements are largely the same for all target puffer species.

Target pufferfish grow to a size of around 6 inches (15 cm) and are not very active, which means they don’t need a large fish tank like many of their cousins. A 35.5 inch (90 cm) setup should be fine for a single puffer. Filtration should be heavy and strong water flow is appreciated.

These fish come from the Mekong basin, which flows through Cambodia, Laos, Thailand, and Vietnam. These freshwater puffers are poisonous if eaten, causing saxitoxin to accumulate in the skin, which has resulted in fatalities among the locals. The exact preferred environment for these fish is not exactly known, but the water in this basin is usually murky with varying flows depending on the location on the river.

Like red-eye puffers, these fish are nocturnal hunters that become active after nightfall. If you want to see your target puffer in its active state, try installing a moonlight in your tank that comes on for a few hours after the normal lights go off. The blue light will be enough to allow you to see your target puffer hunt without distracting it.

These fish are not completely carnivorous and require some plant matter in their diet. Feed a varied diet of snails, mussels, and other crustaceans, as well as a plant-based food, like peas.

Here you can see a freshwater puffer really enjoying some frozen food instead (NOT graphic)!

A rather uncommon but fascinating freshwater pufferfish is Tetraodon cutcutia, naturally found in both freshwater and brackish waterways throughout southern Asia. This species of fish is commonly known as the ocellated pufferfish. This is not a species you will likely encounter in your local fish store very often, but definitely one worth searching for.

The main reason these freshwater puffers are so fascinating is that it is known to have been bred in captivity. The video below shows a male ocellated pufferfish guarding its eggs. If that isn’t an unusual breeding project I don’t know what is!

Contrary to many other pufferfish, this fish doesn’t strictly have to be kept alone. If you can obtain a pair, they can be kept together without too much difficulty. A large aquarium isn’t needed for this species: 20 gallons (75 L) should be enough for a single puffer.

These fish will really keep you entertained with their individual personalities, even when it’s swimming in a circle for a couple of minutes!

There are many different species of puffers to chose from, each with their own personalities and characteristics! Make sure to do proper research on any one of these fish that you end up getting, as proper care is sometimes hard to give.

If you have any more questions about keeping these freshwater puffers or want to share your own experiences, don’t hesitate to leave a comment below!

PS: Want to read more about pufferfish? Click here to browse through the entire list of articles related to puffers.

A guide to culturing Grindal Worms 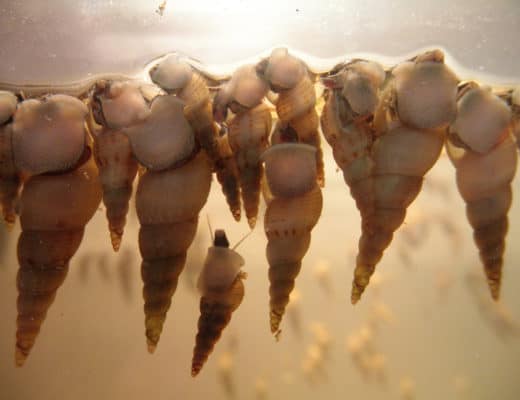 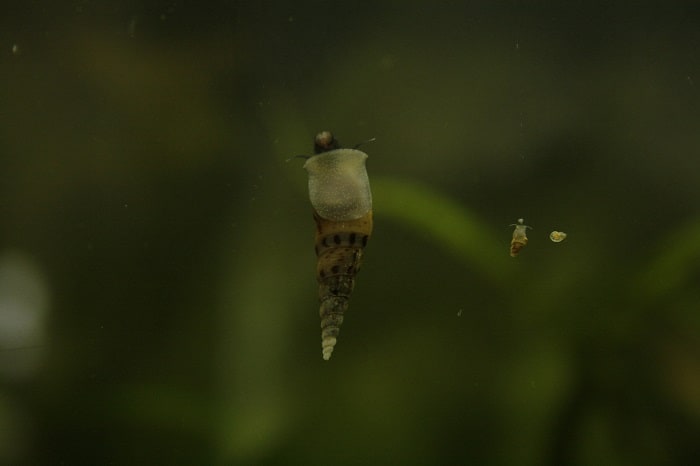 Removing snails from your aquarium