Can Frogs Eat Fish Food? Everything You Need To Know! 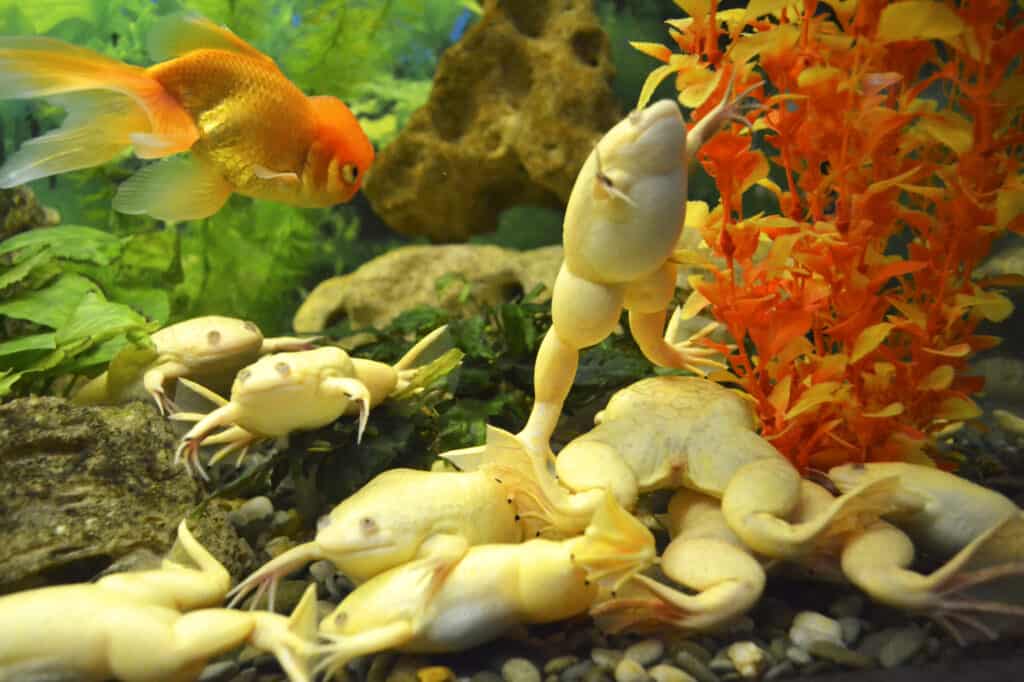 Frogs are endlessly fascinating creatures to keep in an aquarium or herpetarium. But like fish, you need to create the ideal environment and feeding regime for them to remain healthy and happy.

When it comes to feeding frogs, a diverse diet that mimics their natural menu is the key. If you try to feed your frogs commercial fish food, they’re unlikely to accept it. Even if they do, it probably won’t do them much good.

Let’s find out why.

What Do Frogs Eat in the Wild?

When we’re learning how to feed an aquatic pet, it’s always important to understand what they’d eat in the wild.

It’s difficult to generalize about frogs because they’re such a diverse family of amphibians. There are more than 5000 frog species in the wild, and some will even eat more plants than meat.

In fact, at least one known species eats mainly fruit! Most frog species, however, are primarily carnivorous.

Small carnivorous frogs like to feed on ants, termites, aphids, beetles, mosquito larvae, small worms, and flies. Larger frogs like Pacman frogs and African bullfrogs are fierce predators and will also eat small fish, other amphibians, and even young mice!

Most frogs are predators that tend to hunt the majority of their prey on land, although there are a few exceptions, such as the African Dwarf frog, which we’ll discuss at the end.

What Should I Feed My Frogs in an Aquarium or Herpetarium?

In captivity, your pet frogs need a diet as close as possible to their natural one. Since each frog species has different dietary requirements, you need to research your specific frog species to find out which types of foods they prefer.

Carnivorous frogs are generally predators rather than scavengers, meaning they like chasing down living, moving foods rather than eating dead ones.

Good live foods for pet frogs include springtails, ants, beetles, moths, earthworms, and crickets. As we’ve mentioned, some types of frogs will also eat small fish, and some people have even kept frogs in their guppy tanks to control the population of guppy fries! Feeder fish can indeed be given to frogs that naturally hunt fish.

Pet frogs shouldn’t be fed much of anything that wouldn’t exist in their natural diet. Their natural behavior, digestive systems, and nutritional requirements tend to be geared towards hunting live prey of small animal species.

If you feed your frogs things that they weren’t made to eat, you might find they develop digestive problems, become bloated or constipated, or develop nutritional deficiencies.

Furthermore, if you don’t offer your frogs live food, you’ll be depriving them of their primary natural occupation: hunting for food. Without this crucial exercise, your frogs could become bored, unfit, and obese.

Can I Feed My Pet Frogs Commercial Fish Food?

As we’ve said, feeding frogs anything outside their natural menu can be detrimental to their health and well-being.

Dried fish foods such as fish pellets and flakes should never be given to mature frogs, as they contain many ingredients that would never be a part of your frog’s natural diet.

Although some aquarists have tried feeding their pet frogs fish flakes and pellets, many frogs simply wouldn’t recognize them as food and leave them to rot, worsening the water quality.

If you did manage to persuade your frog to eat commercial fish food, it’s unlikely that your frog would be happy on such a diet and may even die prematurely.

There are, however, some foods that are suitable for both fish and frogs.

Live Foods That Are Good For Fish and Frogs

If you keep pufferfish, loaches, South American cichlids, betta fish, or gouramis, you may already be feeding live foods to your fish.

Live fish foods such as bloodworms, tubifex worms, brine shrimp, and mosquito larvae may all be enjoyed by small frogs too. It can be fun feeding these types of foods to a mixed tank and watching the inhabitants dash around in a feeding frenzy, savoring the feast.

Some people have also managed to coax their aquatic frogs into eating frozen foods, such as frozen blood worms or frozen brine shrimp. While this might be better than feeding frogs on dried foods, you must remember that carnivorous frogs are predators, not scavengers.

In the wild, frogs never eat dead food, so it may be considered unwise to feed such foods to them in an aquarium.

Tadpoles and froglets (baby frogs still with a tail) tend to be less fussy when it comes to food than adult frogs and can eat a wide variety of foods.

In the wild, tadpoles will often feed first on their egg sac before moving onto algae and aquatic plants, and then turning to more meaty sources of food. Tadpoles are well known for eating one another if the opportunity presents itself!

Tadpoles and froglets may accept fish food when it’s given to them, but it shouldn’t occupy the main part of their diet.

Since it doesn’t contain all of the nutrients they need, tadpoles and juvenile frogs fed on fish food may not develop properly. This could result in nutritional-deficient symptoms like a type of metabolic bone disease.

Therefore, feed tadpoles and froglets instead of small live foods like bloodworms, brine shrimp, and daphnia. If they have little algae in their tank, then occasional algae wafers may also be beneficial.

Can Frogs Eat My Fish?

As we’ve mentioned, some large species of frog can eat live fish. This may be alarming news for you if you’ve just introduced a frog into your community tank! But don’t worry just yet – few species of frog are large enough to eat fully-grown fish.

Exceptions would include Pacman frogs, American bullfrogs, and African bullfrogs. These enormous amphibians will prey upon just about any living thing that they can fit in their mouths, which could include small fish like neon tetra, guppies, and betta fish.

Be warned though, that even small frogs are quite capable of eating fish fry, and if their parents are protective of them, your feasting frog could end up getting attacked by them.

Some people have kept frogs with goldfish, both in fish tanks and in ponds. So you may be wondering: Can a large frog eat my goldfish? The answer: it depends on how big your goldfish are compared to your frog.

Frogs are known to try to eat anything the width of their head. If you have especially large bullfrogs and very small goldfish, then yes, your frogs could potentially eat your goldfish.

If you have a garden pond and don’t want the wild bullfrogs to eat your goldfish, consider getting larger breeds of goldfish, such as Comet goldfish, Ryukyu goldfish, or Shubunkin goldfish, which all grow to at least 10 inches long in a pond, bigger than any frog would be willing to take on!

You may have heard of people feeding their African Dwarf frogs fish food. So are these popular pets an exception to the no-fish food-for-frogs rule?

Yes and no. African Dwarf frogs are a type of ‘Pipid frog’ and are unusual in that they spend their entire lives in the water. They also feed underwater, so instead of having a long, sticky tongue to catch their food on land like terrestrial frogs, they hunt their prey by sucking them up underwater!

These frogs are known to be remarkably indiscriminate when it comes to eating, and unlike other frogs, they’ll sometimes eat dead meat. This opens up your feeding options because you can feed them with frozen foods like thawed frozen bloodworms, blackworms, tubifex worms, and brine shrimp.

Some pet food brands have even created specially formulated frog pellets for aquatic frogs such as African Dwarf frogs. As with all aquatic pet food, use your common sense and do your homework when choosing your feeding regime. While frog pellets may serve as an occasional supplement to their regular diet, frogs are generally better fed on the natural foods that we’ve already discussed.

How Often Should I Feed My Pet Frog?

Like fish, pet frogs mustn’t be overfed. Overfeeding is one of the biggest causes of health problems and poor water quality and must be avoided.

Frogs only need feeding once a day at the most, and only as much as they can eat within a few minutes.

Larger frogs like bullfrogs can even go without food for several days between large meals, such as baby mice!

With a few exceptions, frogs won’t do well on dried foods, and feeding them an inappropriate diet could lead to health problems and nutritional deficiencies.

Frogs can make wonderful pets, but they require the right care and feeding regime just as fish do. Most frogs are carnivorous predators and will do much better when fed on a diverse menu of live foods.