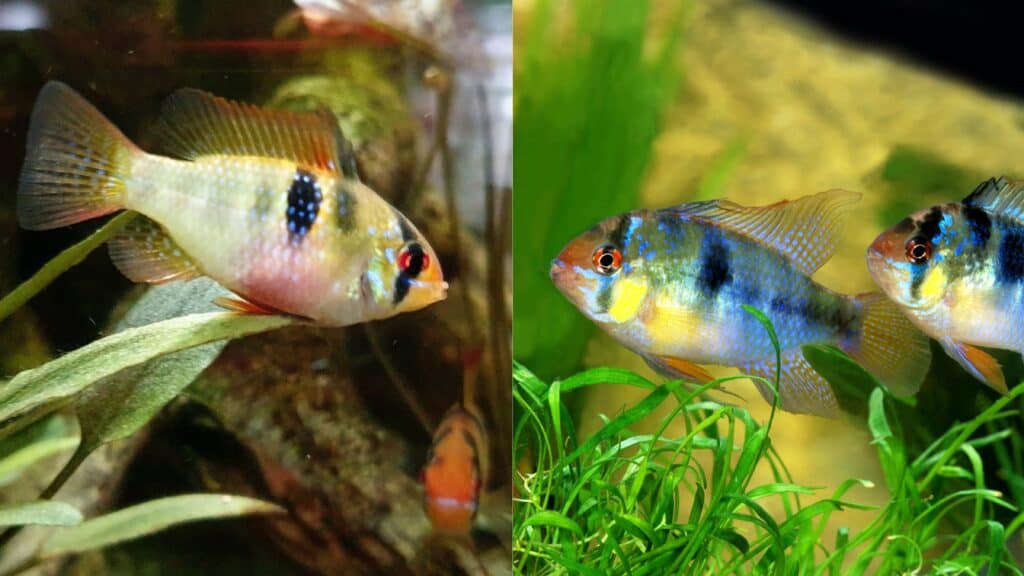 The Bolivian ram and German blue ram share many characteristics, such as being a part of the same fish family and being peaceful. But what are the differences between these two beautiful freshwater fish?

An example of their differences is that the Bolivian ram is easy to care for and can live in a wide range of temperatures, whilst, in contrast, German blue rams are a little more delicate and need to be kept in a tank with a stable water temperature.

In this article, I’ll break down the key differences between Bolivian rams and German blue rams so you can decide which fish is right for your aquarium.

What Is a Bolivian Ram?

The Bolivian ram originates only from the Amazon River in Brazil and Bolivia and belongs to the Cichlidae family.

Also, they are known as Bolivian butterflies, Bolivian ram Cichlid, and ruby clown Cichlid. They are omnivorous, meaning they eat both small organisms and plant material.

Not only do these guys have a stellar reputation as perfect aquarium fish, but many fish enthusiasts agree that they are great for beginner breeders. The main reason is that they tend to be peaceful creatures in contrast with the other members of their family.

In addition, they can withstand colder temperatures and a variety of water types. However, they will do better when their living space echoes their natural environment – meaning an aquarium with acidic water and moderate climate conditions.

Further, male and female Bolivian rams differ in size and color. Typically, the female is smaller with a different-colored belly.

What Is a German Blue Ram?

German blue rams are small and beautiful fish that come in a variety of colors. They are part of the peaceful Cichlidae family and typically have yellow, blue, and white coloring. Their bright colors and interesting shapes make them popular among aquarium enthusiasts.

More surprisingly, the German blue ram is not actually from Germany. These fish come all the way from South America where they reside near the Amazonian rivers in Colombia and Venezuela.

In fact, the name German blue ram comes from the color variation of the fish. Originally, blue rams had different shades of blue, but German breeders decided to breed their rams to continue a certain shade of blue.

German blue rams are a type of fish that prefer to live in more acidic environments, similar to those found in South American rivers. However, unlike Bolivian rams, they need warmer water temperatures.

In addition, these rams are omnivores, so they eat both plants and small animals. A nutritious diet for them must include a combination of plant and meat-based items.

Male and female German blue rams have distinct physical traits. For example, males typically grow to be 1/2 inch to 1 inch (1.3 to 2.5cm) longer than their female counterparts. In addition, females usually feature a pinkish hue on their stomachs.

Not only do these fish have specific dietary requirements, but they also need optimal water conditions in order for breeding efforts to be successful – making them quite difficult fishes to breed overall.

How to Properly Care for Bolivian Rams?

Replicating the Bolivian rams’ natural environment is the key to success when it comes to keeping them healthy and happy.

Because they are native to the colder depths of the Amazonian rivers in Bolivia and Brazil, they require temperatures of 87°F (30.6?).

As for pH levels, they prefer slightly acidic water that has a range of 6 and 7.5. To maintain these optimal conditions, you can use a water conditioner and test the pH levels regularly.

When it comes to water changes, you should do them once a week and change 20% of the water each time.

In order to circulate the water and oxygenate it properly, you can use an air stone. This way, you can also reduce the risk of ammonia and nitrate poisoning.

To ensure their health and safety, these fish need both rocks to hide in and plants to breed. If they are kept in an exposed aquarium with other fish, they will feel intimidated which could shorten their lifespan significantly. By giving them enough space though, you can help them live healthy lives for at least four years.

Unfortunately, Bolivian rams may fall prey to parasites. One of the most recurrent ones these Cichlids face is white spot disease, also called Ich. If you see white spots appear on their body where none were before, then try raising the temperature to 86°F (30?) and wait to see if they disappear.

If the parasite persists, you will have to resort to using copper. Copper is a great option for eliminating parasites in your fish tank. However, be cautious because it might harm the plants.

Furthermore, they will require a place to hide. As a result, you should select an appropriate plant ecosystem for them. I recommend java fern, amazon sword, anubias nana, or wisteria.

How to Properly Care for German Blue Ram?

German blue rams are fragile Cichlid and can’t survive in an environment that isn’t similar to their natural habitat. Thus, it is important to take extra care when setting up their tank and to maintain the water conditions properly.

In terms of water temperature, they prefer it to be between 78°F and 85°F. To achieve these temperatures, you can use an aquarium heater.

Also, they thrive in soft to medium-hard water. The ideal water hardness should be between 6 and 14 dGH.

As for water quality, you should do a partial water change of 20% every week and make sure to vacuum the gravel to get rid of the fish waste. When changing the water, you must first treat and temper the new water before adding it to the old.

To provide a secure and stress-free environment, you should also add plenty of hiding spots in the form of caves, rocks, and plants.

In addition, German blue rams are susceptible to fish tuberculosis, which is a disease that can also affect humans. The most common symptoms you will see are:

Be cautious if you come across the following symptoms, and make sure to take precautions such as wearing gloves before coming in contact with the water. Humans can catch this disease from fish, so it’s important to get rid of all the contaminated water and start fresh.

The Bolivian ram is a peaceful and shy fish, so avoid any aggressive fish in their community. They will get along well with other dwarf Cichlids and other peaceful fishes. Some compatible fish include:

In addition, refrain from including smaller fishes or plants in their tank as they might mistake them for food. In general, Bolivian rams are shy and won’t bother other fish much. Consequently, it is perfectly acceptable if you purchase a tank exclusively for them.

To have a healthy and thriving German blue ram, it’s important to keep them with other peaceful fish who won’t pose a threat. Some compatible fish include:

Also, they do well living in communities with other gentle fish or plants, as long as the smaller fishes and plants don’t resemble food. In fact, I don’t recommend mixing males in the same tank because they are likely to fight for territory until one of them dies.

What Do the Bolivian Ram and German Blue Ram Have in Common?

What Are the Key Distinctions between Bolivian Ram vs German Blue Ram?

How Do I Decide Which Fish to Get?

Your choice of fish depends on your plans for it. If you want an aquarium centerpiece, go with the German blue ram. On the other hand, if you’re a beginner breeder, the Bolivian ram is ideal. Still not sure which to choose? Consider these factors:

Both the Bolivian ram and the German blue ram are beautiful fish that will brighten up your aquarium. It really comes down to personal preference when deciding which one is right for you.

Whichever fish you choose, make sure to do your research on how to care for them properly so you can provide the best home possible!

I hope this helped you decide which fish is best for you! If you have any questions, feel free to leave a comment below.