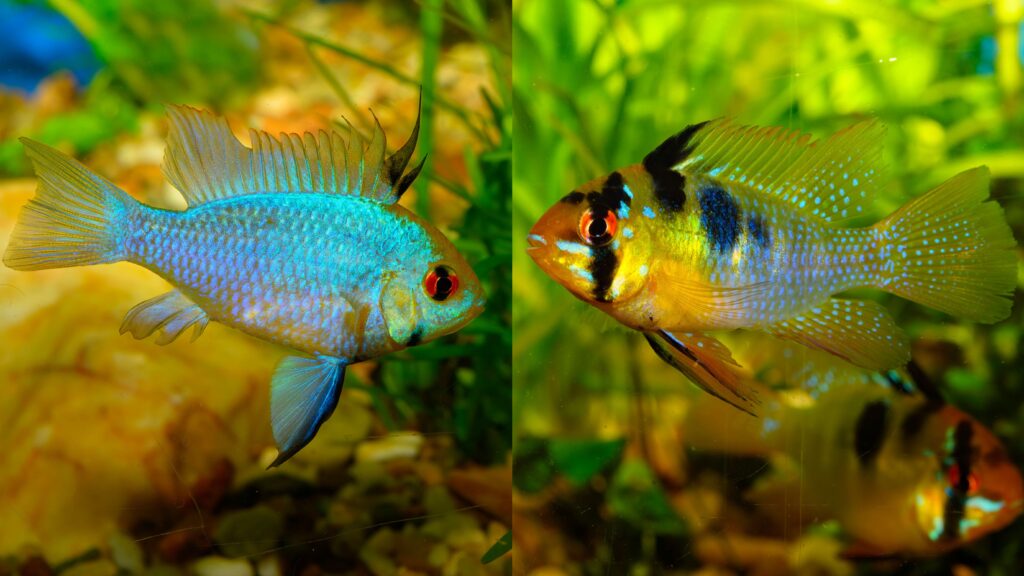 Electric Blue rams and German Blue rams are beautiful fish that many hobbyists admire. But there’s some confusion surrounding these two species.

Are Electric Blue Rams and German Blue Rams The Same Species Of Fish?

Perhaps the most commonly asked question by aquarists confused about Electric Blue rams and German Blue rams is ‘are these two fish the same type of aquarium fish?’.

The answer to that question is quite simple. Yes! Electric Blue rams and German Blue rams are variations of the ram cichlid.

Ram cichlids (Mikrogeophagus ramirezi) are also known in the trade as:

The fish come from Colombia, Venezuela, and the Orinoco River basin, where the fish live in the savannas.

The fish are widely bred in captivity for hobbyists, but the wild specimens are generally more brightly colored.

Rams were discovered and introduced to the aquarist community in 1948 by Manuel Ramirez.

Wild Electric Blue ram cichlids were discovered by Manuel Ramirez, who imported the fish into Germany. There followed a line-breeding exercise, which created the German Blue ram.

Line-breeding is the process whereby researchers use two different varieties of the same fish species to create a new one. The idea of line-breeding is to produce a fish that has the most desirable qualities of both original types in the species.

Like most fish from the same basic species, Electric Blue rams and German Blue rams have a few common characteristics and differences.

German Blue rams and Electric Blue rams are quite different from each other when it comes to appearance.

Both species share the same iconic cichlid body shape and finnage. However, they are markedly different in color.

German Blue rams are typically more colorful than their wild relatives. The captive-bred version of this cichlid fish is a beautiful combination of black, white, yellow, and blue colors.

The fish is bluish or white in color at the tail side half of its body, with the front side being yellow. The fish has blue highlights on the white parts of its body, and the fins are yellow.

The ideal tank size for a pair of German Blue rams or Electric Blue rams is 20 gallons or larger, depending on how many fish you have in your community.

If you want to keep a group of these fish, you’ll need a larger tank with lots of hiding spaces where the fish can take refuge if needed.

When it comes to the water pH level, both species are comfortable with slightly acidic water with a pH of between 5.0 and 7.0.

Both species are pretty sensitive when it comes to water chemistry. Generally, hobbyists lose their fish to disease because of the stress caused by poor water conditions. So, you’ll need to keep your tank in pristine condition to enable your rams to enjoy their full four to five-year lifespan.

Both German Blue rams and Electric Blue rams are peaceful and can make excellent community fish in a setup containing peaceful tankmates, ensuring that they are an excellent choice for hobbyists.

However, both species can become belligerent during spawning. At that time, the fish become territorial in an effort to protect their eggs. For that reason, we recommend that you keep your rams in a separate breeding tank.

If you want to add additional fish to your community, you’ll need to know what species make good tank mates for your German Blue rams and Electric Blue rams.

Rams can live with other docile fish species, including:

Avoid keeping large, aggressive fish that could hassle or attack your rams. So, Green Terrors, Convict cichlid fish, and the like should be avoided.

Can Electric Blue Rams and German Blue Rams Live Together?

Both fish species can usually live peacefully together in a community fish tank. However, the levels of aggression that are displayed by both species can vary.

However, we recommend a large tank if you want to keep German Blue rams and Electric Blue rams together. Ideally, you should have a tank of 75 gallons as a minimum to provide plenty of swimming space for the fish.

To be on the safe side, the tank should be decorated with plenty of hiding places in the form of driftwood, rocks, caves, and dense planting. If the aquarium is too bare, there’s a chance that aggression might occur.

You can reduce the likelihood of aggression in the fish by keeping each species in pairs.

In this section of our guide, we answer a few of the most commonly asked questions about the difference between the Blue ram and the German Blue ram.

Q: What is the difference between an Electric Blue ram and a German Blue ram?

Both these fish come from the ram cichlid family. However, Electric Blues were line-bred to create the German Blue ram.

A: Electric Blue rams typically grow to reach 1.5 to 2 inches long. In contrast, German Blue rams can reach 2 to 2.5 inches in length.

Q: How do I identify my German Blue ram?

Q: Can I keep three German Blue rams together?

A: German Blue rams should be kept in mated pairs. That said, you can keep a group of these fish, provided you mix males with females.

Bear in mind that these fish pair for life. That could cause an issue if you added a single male to a tank containing a mated pair.

Did you enjoy our comparison between the Electric Blue ram and the German Blue ram? If you did, please share the article!

These fish can be sensitive to water quality, but they are generally peaceful and can make a good addition to a community tank.

If you have Blue rams in your collection, we’d love to hear about them! Tell us about your fish in the comments box below.