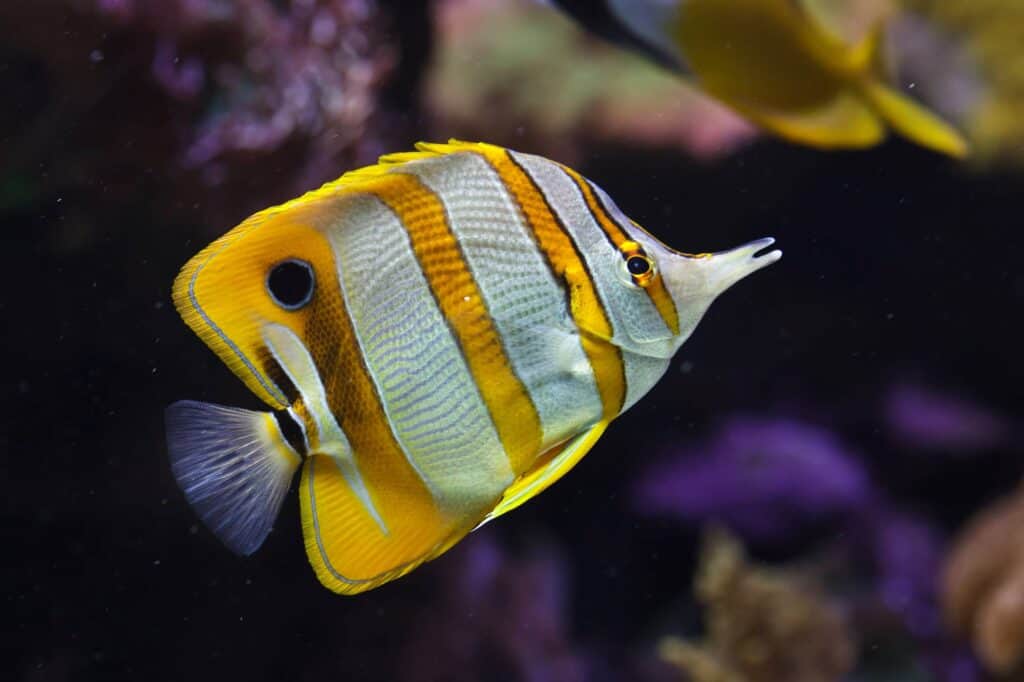 Butterflyfish are some of the most iconic species of fish swimming around a shallow reef with large, angelfish-like bodies and eye-catching yellow, black, and white patterns.

In the aquarium trade, these beautiful fish also make excellent additions as saltwater aquarium life, in part because they graze on the rocks for algae and other microorganisms.

Unfortunately, these shy fish are among some of the most difficult to keep. They’re not great to have in a beginner fish tank, largely due to special care requirements making the butterflyfish habitat a challenge to set up.

Keep reading to find out everything you need to know about butterflyfish, including the most common species of butterflyfish and how to keep them in your own aquarium!

Butterflyfish belong to the Chaetodontidae family of fish, and there are about 130 different species found throughout the Atlantic, Pacific, and Indian Oceans.

In the wild, these marine fish get a large part of their diet from corals, which means they are not reef-safe species. They are also quite territorial, but they are easier to manage in captivity.

Butterflyfish are very similar in appearance to marine angelfish (Pomacanthidae family), and the two aquatic animals are often kept together in the same aquarium by hobbyists.

Are butterflyfish easy to keep in the aquarium?

Butterflyfish are considered to be for intermediate to advanced hobbyists. Some species are more difficult to keep than others, but they should still not attempt to be kept by reefers new to the aquarium trade.

In the wild,  butterflyfish voraciously graze on corals, algae, and other organisms living in the rockwork. In the aquarium, they need ample space to swim and plenty of nooks and crannies to find food.

Because of this, they usually require tank sizes upwards of 75 gallons (283.9 L). Once in the aquarium, most species of butterfly are relatively hardy. However, getting them to eat can be another challenge.

Butterflyfish are notoriously picky eaters that may or may not devour your coral reef and other aquarium life overnight. Because of their affinity for stony corals, they are often used as a means for controlling Aiptasia pest anemone populations.

However, it takes extra care and attention to get them on a reasonable, steady feeding schedule and diet.

Even then, they are active swimmers and need to be fed multiple times a day to ensure they’re getting enough. Sadly, many butterflyfish die after only a few months for seemingly no reason at all.

Butterflyfish aren’t the hardiest species, but they’re not particularly difficult to keep, in terms of water parameters at least. They need standard, quality saltwater aquarium water, though the tank should be mature and stable.

Butterflies love to pick at anything they find on live rock, so having a good supply and level of biodiversity will help keep your fish fed. A mature tank will also have fewer parameter swings which will keep your butterflyfish safe and stress-free.

Otherwise, the recommended water parameters for saltwater butterflyfish are:

The tank should always have 0 ppm ammonia, 0 ppm nitrite, and minimal nitrates (<10 ppm).

In the aquarium hobby, not all butterflyfish from the Chaetodontidae family are labeled as butterflyfish. For example, bannerfish, like the schooling bannerfish (Heniochus diphreutes), is also part of this butterflyfish family, but they’re rarely regarded as such.

Fish identification becomes especially confusing when you consider that the look-alike moorish idol (Zanclus cornutus) is from a completely different family called Zanclidae!

For these reasons, we’ve compiled a list of fish that are only categorized as butterflyfish according to the aquarium hobby; these fish largely belong to the Chaetodon genus.

Here are some of the most common butterflyfish species you’re likely to come across and some information on how to keep them in your own aquarium.

The auriga butterflyfish, sometimes known as the threadfin butterfly, has a half white and yellow body.

They have a black face mask and a spot towards the end of their tail, known as an eyespot, meant to confuse predators. Fully grown, they can reach about 8 inches (20.3 cm).

Interestingly, their appearance can differ based on where they originate from. These fish are largely collected from the Indian and Pacific Oceans as well as the Indo-Pacific. Auriga butterflies from the Red Sea specifically may lose their eyespot over time.

Auriga butterflies can be aggressive with similar species and other fish that share the same colors and patterns.

The pearlscale butterflyfish is named for its iridescent white body laced with black and accented with a bright orange dorsal fin. They are smaller than other butterflies, growing to about 6 inches (15.2 cm).

Many species within the xanthurus complex look alike, such as the mertensii butterflyfish (Chaetodon mertensii). Most members of this complex are found throughout the Indo-Pacific.

These feeder fish can be kept in a 55 gallon (208.2 L) tank, though bigger is better. Like other species, pearlscale butterflies are omnivores and not reef-safe. They’re relatively peaceful as long as other members of the species are introduced at the same time.

The blackback butterfly, also known as the melannotus butterflyfish, is another small Indo-Pacific species, staying under 6 inches (15.2 cm) when fully grown.

They have a black, diagonally striped body, black eye band, and yellow fins and face. They’re also one of the more inexpensive species of butterfly, though less commonly kept.

Still, they require at least 75 gallons (283.9 L) with plenty of hiding spots. There should be ample rockwork for regular algae grazing, and like other butterflies, they are not reef-safe.

The Pakistan butterflyfish is a unique yet beautiful species. These fish, also recognized as the red-tailed butterflyfish, are named for their contrasting red tail and brown body.

They are found in portions of the Indian Ocean and Indo-Pacific where they feed on large polyp stony (LPS) corals and small polyp stony (SPS) corals. They can reach a maximum size of about 7 inches (17.8 cm).

Pakistan butterflyfish need at least 75 gallons (283.9 L) with 125 gallons (473.2 L) for fully grown adults. Also, these are fish prone to aggression towards their own species unless introduced as a pair together.

Pakistan butterflies are especially not reef-safe.

The raccoon butterfly is a personal favorite, with a bold yellow body and black and white face masking that resembles the animal it’s named after. They can grow up to 8 inches (20.3 cm).

They’re especially popular with some reefers as they eat pest anemones, like Aiptasia and majano anemones. The problem is that they might take more interest in other fleshy corals first.

Raccoon butterflies get big and are active swimmers so they need at least 125 gallons (473.2 L). They can be picky eaters so it’s important to have an assortment of fish foods on hand if you plan on getting one; most hobbyists have found that they take an extra liking to blackworms.

The vagabond butterfly is similar in appearance to the auriga butterfly but grows slightly larger to 9 inches (22.9 cm). They are also slightly less popular, though they still have beautiful white, yellow, and black colorations.

Unlike other butterflies, vagabond butterflyfish are mainly carnivores, meaning they’ll largely accept meatier foods and could potentially go after any smaller delicate fish or invertebrates in the aquarium.

That being said, they do tolerate being kept with other species of butterfly, but should not be housed with more aggressive species. Due to their size and activity, they need at least 125 gallons (473.2 L).

And no, the vagabond butterfly is not reef-safe.

The copperband butterfly is probably the most recognizable species of butterflyfish and is considered to be one of the hardiest. However, they are still challenging and can unexpectedly die at any given moment.

These fish have beautiful alternating yellow and white stripes and can grow to an impressive 8 inches (20.3 cm). They have a beak-like mouth that allows them to pick in between cracks and crevices.

Copperband butterflies need at least 125 gallons (473.2 L) and a very mature system. This is one of the few species of butterfly that hobbyists have had success with keeping in a reef setting. However, there is always the chance that your copperband picks at corals, so don’t be too trusting.

The bigger challenge with keeping copperband butterflyfish is keeping them fed. They are notoriously picky eaters at first, but once they acclimate to the tank, they can live for many years.

The first step to adding a copperband butterfly to your tank is making sure that it’s healthy. You definitely want to watch it eat before purchasing it and find out what food it’s accepting. At the same time, check for intensity of colors as well as other signs of disease.

Once you’ve successfully acclimated your copperband to your tank, it’s time to get them eating your preferred food selection; this will take some time and there will be lots of trial and error in the beginning.

Start by offering meaty, live foods, like brine shrimp, mysis shrimp, and marine clams. Slowly transition them to frozen meaty foods. Some hobbyists teach them to feed from a feeding mechanism as this makes it easy to watch that they’re receiving the nutrients they should be.

From here, you may be able to transition them to a flake or pellet, but for their own health, it’s best to keep them on a high-protein diet. You may also find that they munch on Aiptasia and algae around the tank as well.

You may recognize the yellow longnose butterflyfish from the Pixar film, Finding Nemo. These interesting-looking fish are yellow with a brownish-purple and white face. As their name suggests, they have a beak-like mouth longer than that of the copperband butterfly.

These fish can grow to be 9 inches (22.9 cm) and need at least 125 gallons (473.2 L). Like the copperband, they should only be kept in well-established systems. These fish are largely considered reef-safe, though they might take a liking to any fleshy LPS corals in the tank.

Yellow longnose butterflies are a little easier to get to eat than copperbands, but it can still be a challenge. First, you will want to ask to see your fish eat before purchasing it.

Once you get it into your tank, then you may start to move them onto other foods. Yellow longnose butterflyfish can have some difficulty feeding out of the water column, so it might be best to offer brine shrimp, mysis shrimp, clams, and other seafood in a stationary feeding device.

As your fish accepts more foods, you may offer a larger variety. The main challenge at first though will be just getting them to accept any food.

Butterflyfish are some of the most recognizable coral reef animals found throughout the Atlantic, Indian, and Pacific Oceans as well as the Indo-Pacific. They come in beautiful colors and are always active in the home aquarium setting.

However, they’re not good fish for beginner aquariums as they can grow very large, need a lot of space, and are picky eaters. Most species of butterflyfish are also not reef-safe which limits the types of aquariums you can keep them in.

If you have any questions about butterflyfish, the freshwater African butterflyfish, or have had experience dealing with an especially picky butterfly, leave a comment below!