Hammer Coral: How To Care For This Unique Coral 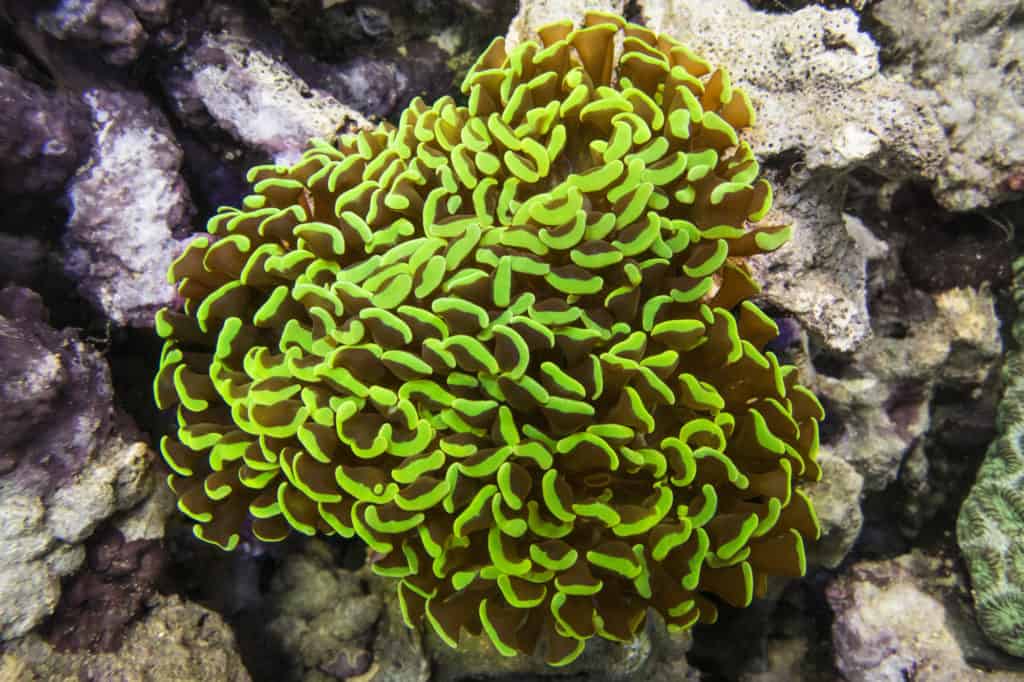 The Hammer Coral is a beautiful large stony coral that is popular with many reef aquarium keepers.

In this comprehensive guide, we explain how to care for this coral, including how to propagate it.

What is Hammer Coral?

Sometimes also called Hammerhead Coral, this large polyp stony (LPS) is a firm favorite with many hobbyists who own a reef aquarium. Hammer Coral is sometimes mistaken for its close relative, the Anchor Coral, Euphyllia Ancora, or the Frogspawn Coral. However, unlike those other species, Hammer Coral is not found in Australian waters, and it can be distinguishable if you look closely at it.

Hammer and Anchor Coral are very similar at first glance, but the Hammer Coral polyps have “T” or hammer-shaped tips, hence the species’ common name. In contrast, Anchor Coral has semi-circular tips that lack the “T” shape.

Hammer Coral is pretty easy to care for, and it will warn you if the water quality in your aquarium is not to its liking.

In the wild, it can take up to two years for a Hammer Coral colony to repopulate, and there are concerns that over-collection of the corals that are destined for the aquarium trade may present a threat to the species. Fortunately, it is possible to propagate the Euphyllia in captivity, and that’s crucial for preserving the remaining wild colonies.

Despite suffering in the wild, Euphyllia Fimbriata is not yet considered to be endangered and does not appear on the IUCN Red List.

The Hammer Coral was first described in 1799 by Spengler.

Euphyllia corals are found in the Western Pacific in the Philippines. These corals live in colonies in waters where there is a gentle flow, growing at depths of up to 131 feet and enjoying indirect bright light. Hammer Corals have stinging cells that they use to defend themselves against predators and to capture small prey animals on which they feed.

Hammer Corals live in large colonies with corallite walls that form on the outer perimeters. The coral’s polyps can retract into the skeleton, extending during the daytime and partially at night.

The tentacles of this Euphillia coral have hammer-shaped tips, which are sometimes slightly curved. The sweeper tentacles can be tan or brown with cream or green tips. When the coral is feeding, each tentacle can stretch to become two to three times their usual size. Some wild Hammer Coral colonies can reach over three feet.

The lifespan of the Hammerhead Coral is unknown.

Care of the Hammer Coral

Euphyllia Fimbriata is moderately easy to care for, although you may need to try placing the specimens in different areas of your tank to find their preferred spot. You’ll know when the coral is happy, as you’ll see the polyps expanding and feeding.

For it to thrive, your Hammer Coral needs a live rock or reef environment, together with some fish for the production of organic matter that the coral uses to supplement its diet.

So, these corals do best in a mature tank rather than a new setup. You’ll need a fairly large tank of at least 50 gallons to comfortably accommodate one of these corals.

Be careful not to position the Hammer Coral directly underneath any metal light fittings in the tank that could injure the coral’s polyps. Damage to the polyps will cause the tissues to die rapidly, and you could lose your specimen.

Hammer Corals need a water temperature of between 74° and 83° Fahrenheit.

Note that the water should be free from phosphates, as these are harmful to most corals.

Although some turbulence is good, as it helps to circulate food particles around the tank, this LPS coral does not tolerate strong water movement. If the water flow is too strong, it can prevent the polyps from extending properly and will inhibit their ability to capture food.

To keep the water in the tank clean and within the parameters that are acceptable to the coral, you’ll need to carry out regular water changes of 5% weekly or 20% monthly.

It’s worth noting that carrying out 5% water changes every week replenishes many of the additives that the coral needs, which is less costly than buying water supplements. However, you may need to use additives to maintain the proper levels of growth of the coral’s skeleton.

To keep your Hammer Coral healthy, you’ll need to use the following water supplements:

You’ll need to keep your Hammer Coral well away from other corals, as this is an aggressive species, especially when hungry. Remember that the Hammer’s sweeper tentacles can extend to over ten inches.

However, keeping your Hammer Coral well-fed will help to prevent any unwanted clashes between the different species in your tank.

Euphyllia Fibriata can be safely kept with their own genus, but they can be sensitive in a reef tank that has a large collection of soft corals, especially some varieties in the Sinularia group.

Most of the coral’s nutritional needs are met through their relationship with a type of marine algae called zooxanthellae. Also, coral Euphyllia captures planktonic organisms and food particles from the water column, and they can absorb dissolved organic matter.

Captive Hammer Coral can be fed krill, brine shrimp, Mysis, and other smaller items. Surprisingly, the corals are also capable of devouring larger pieces of food, including diced fish or shrimp, which you can include in the diet. Different parts of the fish have different nutritional qualities, so feeding a whole fish to your Euphyllia will be highly beneficial.

Hammer Corals are gluttons and are always ready to accept food, so you need not worry about overfeeding your Euphyllia.

All LPS coral species can reproduce both asexually and sexually, being both male and female. Wild specimens reproduce sexually by producing sperm and eggs simultaneously, creating a fertilized egg that then becomes a free-swimming planula larva.

The larvae eventually settle on the substrate, where they become plankters. The plankters go on to form tiny polyps, which begin to produce calcium carbonate, eventually becoming a coral. As you can imagine, most planula larvae become food for fish and other marine creatures, and only a few survive to create coral.

In the captive tank environment, asexual reproduction takes place. Small groups of polyps detach from the main colony with tiny skeletons already attached. The coral will also pinch off its own tentacles. The tentacles float away from the main colony, eventually reattaching to form a new one.

Wear gloves throughout the process. The coral will exude a slime that should not come into contact with other specimens.

Use an electric saw and remove frags at least two inches away from the top of the coral. Do not use scissors or a bone crusher, as that will splinter the coral skeleton and injure the polyp.

Take the frag to a rock or a plug where it will receive good water flow, and glue it there, using underwater putties or 2-part epoxy.

All Euphillia are pretty hardy corals. However, they are vulnerable to a few diseases.

Brown jelly is caused by tissue damage, poor water quality, or both, and it looks exactly as the name suggests.

To treat brown jelly, remove the coral from the main display aquarium and place it in a container filled with tank water. Use a brush to remove any obvious brown jelly. Using freshwater with the same pH and temperature as your main tank, dip the coral for a few minutes. The freshwater shock will kill most of the microorganisms that cause brown jelly.

Treat affected areas with a Lugol’s dip or antibiotic paste. Brown jelly responds well to treatment with broad-spectrum antibiotics, such as Kanamycin and Neomycin sulfate. These treatments come in tablet form, so you’ll need to crush the pill and mix it with seawater to make a paste, which you can then apply to the affected area of the coral, using a small paintbrush.

When you’ve finished treating the coral, place it in a quarantine tank, and monitor it closely until it has recovered fully. When you’re happy that all signs of disease have disappeared and the coral is healthy, return the specimen to the main display tank.

Hammer Coral is often confused with Anchor Coral. If you see the coral advertised as “Australian,” what’s on offer is most likely Anchor Coral, which looks similar to its Hammer Coral cousin but is, in fact, a different species.

It’s worth mentioning here that, when you acquire your coral, you should look closely for damage. When the coral is collected in the wild environment and broken from its parent colony, soft tissue damage can occur, especially if the coral’s skeleton has splintered into the flesh of the polyp.

Before making a purchase, check that the coral has been in the store for at least a week and is feeding well. That will help to avoid sick coral, as Euphyllia can take a few days to recover from shipping and show any signs of distress.

Most good aquarist stores with a good selection of marines carry Hammer corals. You can also buy specimens online, but these are often more expensive, and you’ll need to pay for shipping too.

You can expect to pay upward of $40 for a small Hammer Coral specimen.

In this part of our guide, we answer some of the most frequently asked questions about hammer corals and their care.

Q: Are Hammer Corals easy to care for?

A: Hammer Corals are considered to be moderately easy to look after.

A: Yes, these corals are capable of stinging. They use their sting to protect themselves from predators and to capture small prey items for food. When handling your coral, always wear gloves to protect your hands.

Q: What do Hammer Corals eat?

A: In the wild environment, the coral’s primary source of nutrition is a species of marine algae called zooxanthellae. To supplement that, the coral captures planktonic organisms and food particles from the water column, and can also absorb dissolved organic matter.

In captivity, you can feed your coral a diet of brine shrimp, Mysis, krill, and whole diced fish or shrimp.

Q: Where should I put my Hammer Coral?

A: You must take lighting and flow into consideration when deciding where to place your coral. Lighting should be moderate, leaning to the Royal blue spectrum, and it should not come from metal halides that could damage the coral’s polyps.

The flow around the coral should be low to medium, but it should not be direct. Put the coral at the mid-tank level if possible, as it will expand more, whereas it won’t if you put it on the substrate. Keep your Hammer Coral at least ten inches away from other corals, as its sweeper tentacles can sting other species, especially SPS varieties.

Euphyllia Fimbriata is an attractive coral species that makes an interesting addition to any live or reef marine tank.

These corals are moderately easy to care for, provided that you give your specimens the correct environment and feed them a varied and balanced diet. One word of caution is that Hammer Corals can be aggressive toward other corals when hungry, and they have tentacles that are able to extend up to ten inches. So, you’ll need to site your specimen well away from other corals in your collection.

Hammer Corals are easy to propagate, so you can create your own additional specimens, which will reduce the impact on wild colonies that have suffered from over-collection for the aquarium trade.

1 thought on “Hammer Coral: How To Care For This Unique Coral”