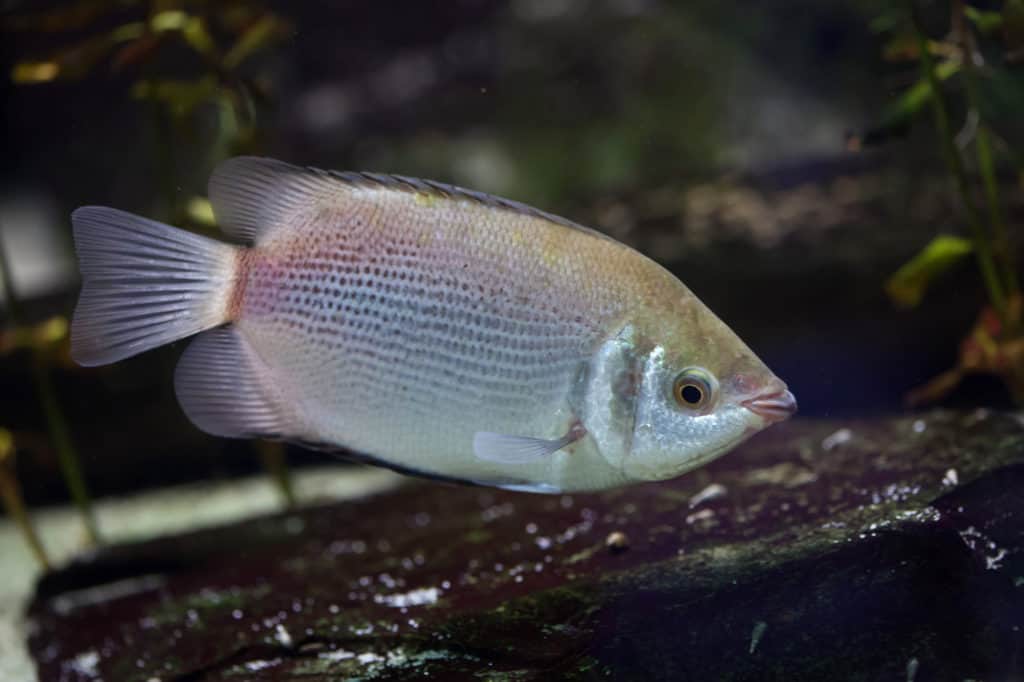 Pucker up! If you’ve ever wanted a kiss from a fish, then the kissing gourami may be the next addition to your freshwater tank. These dazzling fish in their pink variety have become a favorite among many aquarium hobbyists, and are a popular alternative to the dwarf gourami (Trichogaster lalius). However, they can have some aggressive behaviors and have the potential to grow very large, so some special care is required.

Keep reading for everything you need to know about kissing gourami care and keeping these gouramis in your own tank.

This species is known as kissing fish for their distinct mouth and ‘kissing’ behaviors which we’ll discuss later.

The kissing gourami was first described in Java, Indonesia, but has since been largely documented throughout Southeast Asia, including Vietnam, Thailand, Sumatra, and Cambodia. However, the exact range of the kissing fish is unknown as it has become a very popular food dish and has most likely been introduced to new regions by way of the aquarium trade.

This species of gourami prefers calm and slow-moving waters like those in floodplain lakes and swamps. They are also commonly found in areas with blackwater conditions with heavy vegetation. Because these waters tend to have a lot of dissolved minerals wild kissing gouramis can withstand a more acidic pH range, as low at 3.0 to 4.0; they are pretty adaptable to other water conditions as well due to the frequent fluctuations that naturally occur in their natural habitats during the dry and wet seasons.

To help acclimate to these changing conditions, these gouramis have evolved a labyrinth organ. This specific organ allows fish to process atmospheric oxygen. This is especially useful in cases where oxygen levels are low in the water. It is not uncommon to find one of these fish at the surface of the water, puckering its lips for some additional air.

The wild green and brown variation of the kissing gourami is rarely seen in the aquarium trade and has been replaced by more ornamental colors. You are most likely to find a pink kissing gourami, but they may also come in hues of green as well.

Most informative sites will say that your gourami will grow up to 12 inches (30 cm) long. While this is the average size, these fish can easily surpass that size and continue growing. They are a large species that can just keep getting larger and larger given their environment.

Their distinct lips are actually used to increase the amount of food that the fish is able to suck up off of a surface. An extra joint allows them to increase the angle of their mouth while small teeth help scrape algae. It is also believed that they use these lips to assert dominance and establish territories over other kissing gouramis.

There is usually no external distinction between the females and the males, though the females will become noticeably rounder when carrying eggs.

How long do kissing gouramis live?

This species is known to live 20 to 25 years in an aquarium tank setting. However, you are not likely to find many adult fish that are fully grown. This is most likely due to popular misconceptions and misinformation about the species as a whole.

It is commonly believed that they don’t need that much aquarium space and that they can get along with most other tropical fish. However, as we’ll discuss, these gouramis can get very large and can be semi-aggressive towards other tank mates.

For a fish that can grow to such a large size, you’re going to need a large tank. It is usually recommended to keep kissing gourami in a 55 gallon (208 L) tank; however, this would only be good for one fish that is still a manageable size. To keep your gourami happy and to be able to have other fish, a minimum tank size of 100 gallons (378.5 L) is recommended.

Water movement within the tank should be low to help replicate their natural habitat. Too much water flow could actually cause your fish to become stressed. Kissing gouramis will also appreciate dense vegetation, but make sure to keep in mind how large they will get and leave plenty of space for your fish to swim in the forefront. Any plants added should be able to withstand being scraped for food.

They do best with a large-grained substrate and large river rocks for more surface area so that they have easy access to algae in the tank. These fish are also known to burrow in the substrate and uproot plants, so a large gravel will make it more difficult to do so.

Otherwise, kissing gouramis are pretty easy to care for; they need a stable water temperature between 72-82° F (22-27.7° C) with pH between 6 and 8. Because they are known to go to the water surface for air, there should be enough space between the tank and the aquarium hood for them to do so without injuring themselves.

It is also better to go with a bigger tank size to avoid aggression between fish; these gouramis do best in a semi-aggressive community tank with other large fish that can hold their own. However, other fish should vary enough in shape and size that they are not mistaken for the same or similar gourami species as this is when they become especially aggressive.

If you see one of your fish going to the surface of the water for air more than usual, your water may not have enough oxygen in it. This could be due to high water temperatures or high amounts of dissolved nutrients. Test your water parameters, do water changes accordingly, and add an air stone if needed.

Why are my gouramis kissing?

If two kissing gouramis are kept together in too small of a space, you may often see your fish locking lips. It is believied that this is how they establish their territory and assert dominance over one another. If your gouramis are displaying this behavior, your tank may be too small or you have an especially aggressive fish. It is recommended to remove and rehome any fish that are too large or too aggressive for your tank.

In general, it is not recommended to keep more than one of this species in your tank unless you have the space for them to establish their own territories.

Kissing gouramis are semi-aggressive. Some of these gouramis are more on the peaceful side while others will bully the rest of the fish in the tank. Avoid similar-looking fish and species that would be able to fit in your gouramis mouth. Keep an eye out for fin-nipping and chasing.

These fish also have the ability to suck the protective slime coat off other fish, so if there are any signs of bullying make sure to remove the fish as soon as possible. As always, never release something from your aquarium into the wild.

With all that being said, what fish can you keep with your kissing gourami?

Adding other species of gourami, as well as more Helostoma temminckii, should largely be avoided. More active and larger fish like tiger barbs, clown loaches, yoyo loaches, and pictus catfish will do well with your gourami. Invertebrates should be avoided as they could possibly be eaten.

While invertebrates and other small fish may not mix well in your tank, your gourami will definitely appreciate some live or plastic plants. However, any live plants that are added should be able to withstand being scraped for algae and should be able to live in a gravel substrate. It is best to place any plants towards the sides and back of the tank so that there is plenty of swimming area available towards the front.

Species of Anubias and Java moss may be the best bets to add to your tank as they are hardy, regrow faster, and are more difficult to eat than most others. There is always the chance that your fish will take a liking to whatever you choose to put in though so be prepared to lose one or two (or all of them)!

These fish are omnivores which means that you need to regularly offer them both plant- and animal-based foods. In the wild, they get most of their food from scraping algae off surfaces and catching any live foods that land on the water surface. Their specialized gill rakes also allow them to filter plankton out of the water so they always have access to some kind of food.

Due to these mouth adaptations, these kissing gouramis are not able to chew and swallow larger foods. This means that any live foods, frozen foods, fish flakes, and fish pellets should be small enough so that your fish can properly swallow them. Vegetables, like lettuce and spinach, can be supplemented and left for your fish to graze on. Small live foods, like mosquito larvae and bloodworms, may also be offered from time to time to complete their dietary needs.

While it is possible to breed kissing gouramis and is regularly done for aquaculture purposes, it’s highly impractical in a tropical tank setting.

In nature, these fish depend on the rainy season to spawn in flooded areas. There, they can spawn several thousand eggs at once in the dense vegetation. The fry become free swimming within a couple of days and the adults do not exhibit any additional parental care.

So while it is easy to breed these fish, those changing conditions would need to be replicated in a tank. This tank would also need to be able to hold a very large amount of eggs. Given the size of the adult fish, how many fish are spawned, and the low retail price of these fish, breeding within the aquarium trade is not seen as being worthwhile.

If you have a larger tank and don’t want to fill it up with tiny fish, then a Helostoma temminckii may be the one fish to fill that space perfectly. If you’re looking for one more addition to your semi-aggressive community tank, then the kissing gourami may also be for you if there are no species that resemble it.

As long as you are able to accommodate a 12 inch (30 cm) fish for up to 20 years or more, then the kissing gourami is easy to care for and has an especially fun personality. As always, never buy a fish that will quickly outgrow your tank in hopes of upgrading.

If you have any questions about kissing gourami care or have experience keeping these gouramis in your own tank, don’t hesitate to leave a comment below!