How Many Snails Can Comfortably Fit in a 20-Gallon Tank? 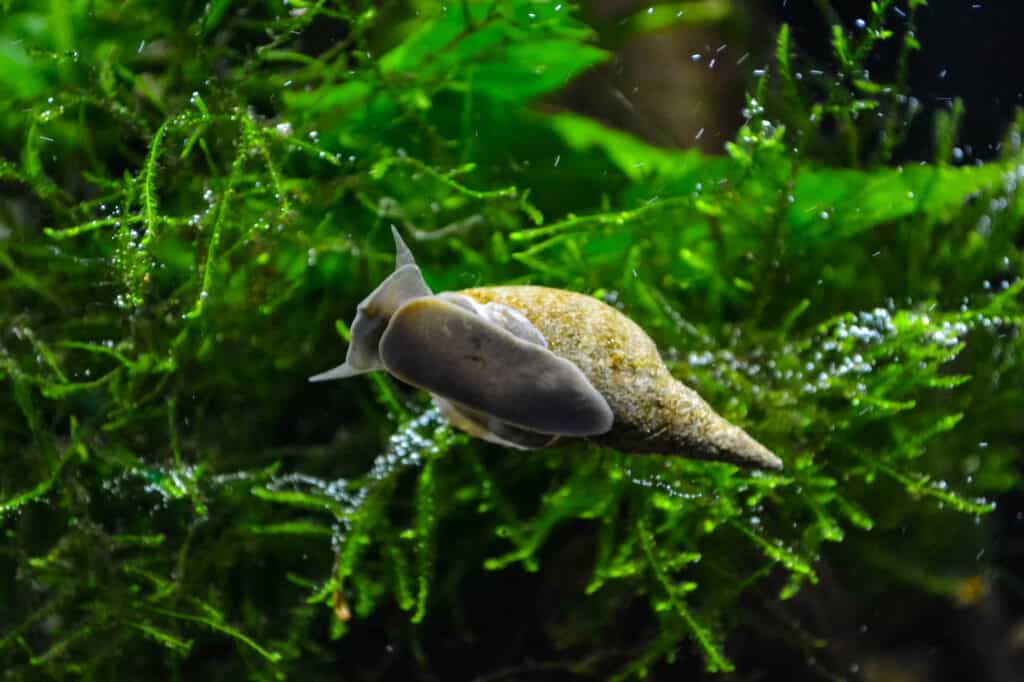 Okay, aquatic snails are just adorable! They’re simply one of my absolute favorite aquarium-dwellers, and like me, you may wish to own as many as possible – but how many is that?

In short, it totally depends on what type of snail you’re buying and if they’re living alone or with other fish!

This article will discuss the basics of stocking your tank with snails and cover the most popular types: The Nerite Snail and the Mystery snail! (No, that’s not a joke… it’s their actual name!)

Which Kind of Snail Is Perfect for Your Aquarium, and How Many You Can Keep?

Most aquarium snails are a type of scavenger that dines on algae, debris, dead plants, and fish, making them a great addition to the cleaning crew of your tank!

These little algae-eaters can play an important role in any freshwater aquarium by keeping the tank sparkly and clean and maintaining the ecosystem.

They’re a great choice if you’re looking for a low-maintenance cleaner that adds more variety to your tank than another fish might. For instance, they can feed on plant matter, thus helping in substrate aeration.

There are different aquarium snail types that survive in a variety of water conditions and water temperatures.

There are many different breeds of aquarium snails, including:

How Much Space Do Snails Need?

The answer to this question depends on several factors: The type and size of aquatic snails, if there are tank mates, if they live alone, etc.

If living alone, with no other tankmates (not even other snails), the general rule is one to two gallons. The larger the tank, however, the more surface area there is for the snail to crawl around, and therefore, the more snails are able to live there.

The inches in diameter of your tank determine the types of snails you will keep. A 20-gallon long tank can accommodate more snails than a 20-gallon tall tank.

The number of gallons of water also influences the type of aquarium snail you keep. These peaceful snails require enough space to swim around. Avoiding overcrowding avoids snail infestation or unwanted snail populations.

Taking a 20-gallon tank, for example, around 10 – 15 snails could live together comfortably, depending on the breed, as long as they’re not living alongside other fish.

Mystery and nerite snails are two of the most popular freshwater snails found in home aquariums. They’re both popular choices, but many beginner snail keepers struggle to tell them apart.

When Nerite hatch, they’re just one gender; however, Mystery snails are able to change their gender over time, making them much easier to breed.

Though this isn’t a huge way of telling them apart, it certainly is a huge difference in providing the correct care for them – you don’t want to end up with a tank overflowing with little baby snails!

One way of being able to tell these breeds apart is by their appearance. Mystery snails have a spiral shell and long pretty antennae. However, Nerites don’t possess either of these and instead come with wonderfully striking patterns and markings on their shells.

Their striking appearance differs by breed; they may have beautiful stripes like the Zebra Nerite Snail or even little spikey horns like the Horned Nerite Snail.

That said, either of these is a great choice, as both are excellent aquarium snails.

How Many Mystery Snails in a 20 Gallon Tank?

As I keep saying, it depends on whether they’re living with tankmates. For the purposes of this article, we’re going to assume that you’re stocking a tank with fish and Snails, as that’s what most people do!

Good tank mate choices for mystery snails are various kinds of Shrimp, such as the Blue Tiger or the Cherry Shrimp, Guppies, Tetras, and even other species of snails, such as the Nerite. They’ll also get along great with Cory Catfish and Killifish.

Make sure your tank is stocked appropriately to avoid any fatalities. No fish stocked with your snails should be big enough to consider them a snack, and all of them should be peaceful in nature.

Species such as Cichlids and Oscars should be avoided at all costs, as these are among the various types of fish that prey on snails.

Knowing how many Mystery snails to add to your aquarium is essential to ensure the happiness and health of your pets. The tank can easily become overcrowded, as when they have babies, they have babies.

Mystery Snails are a fast-breeding snail species and can have up to two hundred (yes, you read that correctly). Two hundred babies in just one egg-laying period.

Not only do they reproduce in such a high amount, but all of this can take place quite quickly, as once the eggs have been laid, they can hatch within two to four weeks.

To try to keep breeding to a minimum, and to prevent your tank from becoming overcrowded with hordes of snails, the recommended amount of Mystery Snails in a 20-gallon tank is between 4 and 8.

In general, they’re quiet and private, minding their own business and bumbling around on the surface of a rock somewhere, happily grazing on algae. They won’t be a bother to your other fish and instead will happily meander around, cleaning up their house.

How Many Nerite Snails Are in a 20-Gallon Tank? (Smaller Snails)

Just like with the Mystery Snail, the answer totally depends on your set-up and if you’re adding them to a community or species tank.

If adding them to a community tank, two or three Nerite snails are a good choice. They should be housed alongside creatures they’re known to get along well with, such as Shrimp, Barbs, Tetras, and Guppies.

They can also cohabit with other friendly snails, such as different breeds of Nerite and also the aforementioned Mystery snail.

Again, keep them away from predators who may wish to pull them out of their shells and devour them. That’s the last thing you’d want to happen to your new pet, and it sounds like an awfully traumatic way to go!

Like the mystery, they won’t bother their tank mates – They’re cute, peaceful, and quiet and are a great choice for beginners just starting out with their first aquarium due to how easy they are to care for.

They’re also a great addition to a cleaning crew, as they enjoy grazing on algae all day long!

If housed alone, it’s recommended to have around four snails in a 20-gallon tank, and Nerites are a great choice for anyone wanting a species-only tank, as there are so many different breeds with different looks to choose from that it can end up being a bit of a pick-and-mix of snails!

Some of the Most Popular Nerite Snails Are:

Like any other aquatic creature, they produce waste and add to the bio-load within the tank, so even though they’re small, you should refrain from adding too many.

They’re also easy to breed and can multiply quickly, so be careful not to add too many.

By now, you should have come to a decision about how many snails you’re able to add to your aquarium – and if you’re still not sure, just throw in a couple!

Okay, don’t actually throw them! But if you add one or two, they’ll have more than enough space to move around and clean as they go.

No matter what type of snail you choose to house in the end – be it the Nerite or the Mystery, they’re both simple to care for and can get along just fine with an abundance of freshwater tankmates.