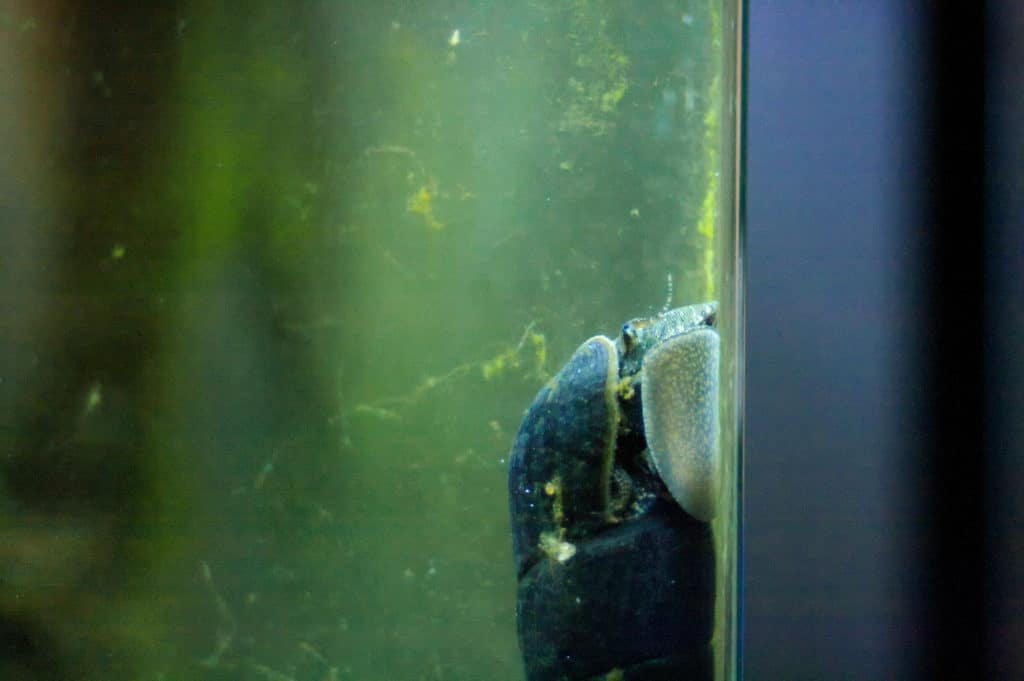 Tired of searching for an aquarium snail that doesn’t produce babies by the hundreds? Nervous about Sulawesi snail care requirements?

The solution is here. Faunus ater, also known as the black devil snail, is a large aquarium snail that doesn’t reproduce in freshwater. Also, it looks awesome! The ideal choice if you’re looking for an interesting aquarium snail that won’t overrun your tank with offspring and is easy to care for.

Keep reading for everything you need to know about Faunus ater care and keeping this black devil snail in your own aquarium.

The Faunus ater snail is naturally found in the Western Indo-Pacific region, where it inhabits a wide range of islands. It can be found in all types of waters, including estuaries which can range from fully freshwater to mid-end brackish.

Faunus ater is definitely one of the more spectacular freshwater aquarium snails.

Its common name ‘black devil snail’ is derived from its black body. Its shell is also usually black, although there are also Faunus snails out there with brown shells and even ‘gradient’ shells (from black to orange to white). These are sometimes referred to as ‘cappuccino’. It’s unsure whether these are actually Faunus ater or another species in the Faunus genus.

Faunus ater looks similar to Sulawesi snails: both sport an elongated shell. In reality, Faunus snails are actually said to be more closely related to Malaysian trumpet snails. They grow to a maximum size of around 3.5″/9 cm.

What do you need to keep your Faunus ater snails happy and healthy? Actually, not that much!

When it comes to tankmates, Faunus ater snails aren’t fussy.

As can be seen in the video below, they are a great choice for super-peaceful setups with dwarf shrimp like red cherries and other vulnerable tankmates. This way, there won’t be any nippy fish to damage the snails’ fragile antennae and even the tiniest shrimp will be left alone. Be sure to keep at least two of these snails, as they do love company. No need to worry about snail babies!

If you do want to keep your Faunus ater snails with larger and more active fish, try to avoid any active hunters. Species that love a very low pH value and soft water don’t make a great choice either.

Like many other aquarium snails, Faunus ater snails are omnivores that will eat pretty much anything they come across.

Any leftover fish foods will happily be consumed, and the same thing goes for dead (or even live) plant bits. Algae is also a favorite, so your Faunus snails will appreciate it if you leave some in the tank.

Because most of our aquariums are a little too ‘clean’ to sustain a few of these snails you’ll need to supplement their diet. Use an invertebrate food that contains plenty of calcium to ensure proper growth; I’ve found high-quality shrimp foods (like the appropriately named ‘Frenzy’ food) work well. Other than that, anything goes. Blanched fresh veggies, algae tabs, regular fish food and even frozen foods will all be devoured.

This snail behaves exactly as you would expect a snail to, with one big difference. They are fast.

If you’re looking for an active snail that spends a lot of its time zooming around the tank in search of algae, Faunus ater is a great choice. They are actually reported to be more active than their Sulawesi cousins and certainly cover more distance!

Breeding Faunus ater snails is not an easy task. This means no risk of a baby explosion, but unfortunately also no way to ensure a steady supply of snails.

Although not much seems to be known yet, it’s suspected that breeding happens in brackish water.

Although Faunus ater snails definitely aren’t as widely spread in the aquarium hobby as some other snail species, you might be able to find them at your local aquarium store. You can also easily order them online from Amazon here!