Harlequin Rasbora and Betta Fish – Can They Live Together? 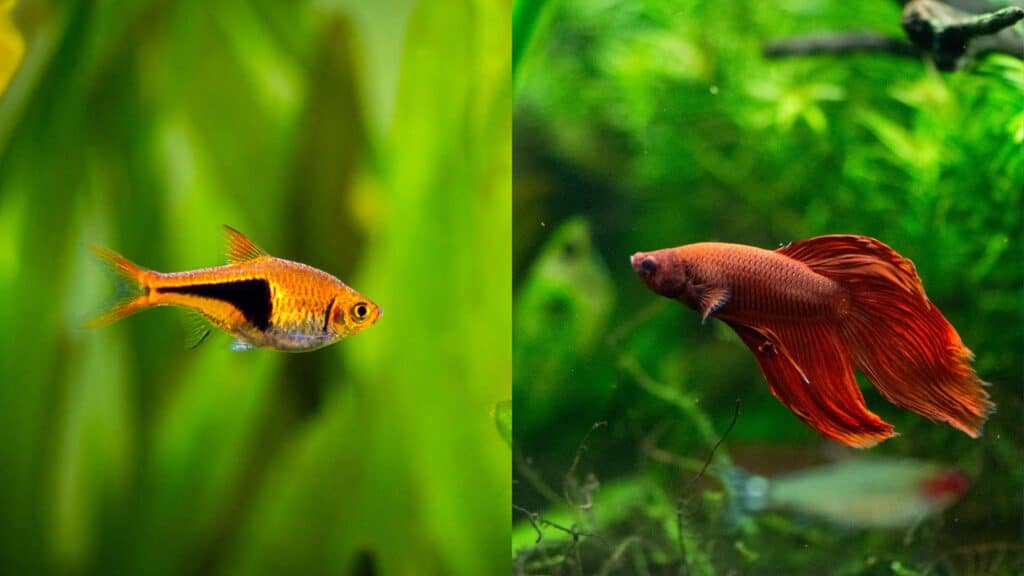 When it comes to looking for tankmates for betta fish, rasboras are often mentioned as some of the best.

Harlequin rasboras are no exception to this rule, and there are some interesting reasons why these two species of fish can make excellent tank mates.

Here we’re going to explore all the reasons why harlequin rasbora and betta fish can make a great match, as well as a few reasons why you might want to look at other possibilities.

One of the most interesting reasons that harlequin rasboras and bettas can make such great tankmates is that they’re both from the same part of the world!

Both species are from the warm, humid climates of southeast Asia, and while the harlequin rasboras have a larger geographical range, both species can be found in southern Thailand.

So while they might be very different-looking fish, some of their physiology is adapted to survive in similar water and surrounding environments.

Since both of these species inhabit the same waters, they both enjoy similar water temperatures.

Betta fish are quite specific in their temperature requirements and like aquarium water to be between 78-81 Fahrenheit.

Harlequin rasboras are more flexible and can tolerate water temperatures anywhere between 72-80 Fahrenheit. This means that 79-80 degrees should be a good temperature to set on your aquarium heater for both species.

The waters that these fish hail from in Southeast Asia tend to be fairly stagnant and full of dead tree leaves and decaying organic matter – especially in the dry season.

The continual release of tannins from the tree leaves in the water makes conditions soft and acidic, so both species need to be adapted to this.

Harlequin rasboras are once again quite flexible when it comes to water parameters, and can tolerate a pH level anywhere between 5.0-7.0 and hardness of between 2-12 dGH.

These two fish are also fairly well-matched in size. Whereas Harlequin rasboras grow to a maximum size of 2 inches, adult bettas can grow to 2-3 inches in size.

This is important because if a betta’s tank mates are too small, they’re more likely to get attacked or even eaten by your betta, whereas if they’re too big, they may intimidate your betta, making him feel stressed and unsafe.

If you’ve been keeping betta fish for long, you’ll know that they are a fairly carnivorous fish that needs a specialized meaty diet.

Community aquarium flake foods or fish pellets won’t satisfy their dietary needs, so a menu of specially formulated betta pellet food and natural foods such as bloodworms, daphnia, and brine shrimp is necessary to keep them happy.

Yet again, the hardy harlequin rasbora isn’t fussy when it comes to eating and shouldn’t have any issues sharing your betta’s food.

To satisfy their preference for slightly more vegetable matter in their diet, you could supplement their feeding regime with occasional broken-up garden peas, and also add soft-leaved aquarium plants for them to graze on.

Also known as Siamese Fighting Fish, betta fish have a reputation for being a fierce, territorial species that don’t always take kindly to other fish – especially their own species!

Interestingly, their slow movement and long fins also make them vulnerable to attack from aggressive fish species too, so choosing tankmates is a delicate balance.

Luckily, harlequin rasboras are tough, incredibly fast-moving little fish that will usually have no trouble out-maneuvering a betta and so are unlikely to fall victim to attack.

Rasboras are also a peaceful family of fish that don’t normally attack their tank mates. It would also be very uncharacteristic for them to nip the fins of a betta fish, although such good manners can never be guaranteed!

We mustn’t forget that each fish is unique, and fin-nipping can become a potential habit in almost any aquarium species.

If you do notice fin nipping in your betta’s tank mates, your best strategy is to remove the culprit as soon as possible and try to change tank conditions to make your fish feel more relaxed and peaceful.

Fin nipping is usually caused by fish feeling stressed, and is especially common when schooling fish are kept in groups that are too small.

Potential Problems With Keeping Harlequin Rasboras and Betta Fish Together

The biggest drawback that aquarium owners are likely to face with keeping these two species together is that harlequin rasboras are shoaling fish that need a medium-sized tank to be happy.

Whereas betta fish are often kept singularly in 5-10 gallon tanks, harlequin rasboras need keeping in groups of 5 or more, and that means a tank size of at least 20 gallons.

If you kept them in groups of less than 5 they’d become unhappy, and a group of 5 in a small tank would be overcrowded, not giving them the open swimming space that they need to thrive.

This means if you already have a 10-gallon betta tank and are looking for tank mates, harlequin rasboras aren’t going to be an option. Check out some alternative tank mates for bettas at the end of the article!

While it is not such a big issue, there is also quite a big difference in the activity levels of these two fish.

Betta fishes are known for being fairly lazy, slow-moving fish that skulk around the tank, living life at a relaxed speed.

Rasboras, on the other hand, are very lively fish. Like their cousins the danios, they love to rocket around the aquarium from dawn to dusk and love nothing more than free swimming space to play all day long.

While this can be quite entertaining to watch, it might also become stressful for your betta fish if he’s sensitive to them. This will depend on the temperament of your betta, but if he perceives the rasboras as either a threat or as something to fight with, his stress levels will go up and his health could decline.

To make sure your betta remains healthy and happy, it’s worth monitoring him closely to see how he responds to your rasbora’s lively swimming habits.

If you’ve read through this article and have realized that your tank is too small to host both a betta and a shoal of harlequin rasboras, or you’re worried that your betta might get stressed by these active tankmates, don’t worry! There are some other good options.

Snail species such as mystery snails and nerite snails, like shrimps, do a fantastic job at keeping your aquarium free from excess algae and are perfectly compatible with bettas.

As for fish, Corydoras catfish can make a most amenable companion for your betta, and Khuli loaches are another popular choice. Suitable smaller shoaling fish would include lamb chop rasboras and rummy nose tetras.

Just be sure to add hiding places for all of these species since some betta fish simply like to pick fights with anything that moves, meaning a safe refuge will always be welcome!

If you’re lucky enough to have a 20-gallon tank or bigger, you could have lots of fun creating the ideal Southeast Asian-themed aquarium for these two species!

Replicating natural conditions in your fish tank is the best way to help your fish thrive, so choosing species from the same region allows you to create a themed aquarium where all your fish can flourish.

In the waters of Southern Thailand, both of these species swim among dense vegetation in water that’s been dyed amber by the tannins from driftwood and dead tree leaves.

You can replicate these conditions at home by installing vigorous aquatic plants such as java fern and hornwort and adding hardwood, driftwood, and Indian Almond Leaves to provide tannins.

In the wild, these fish would rarely be exposed to strong currents, so instead of a power filter, you could consider installing a double-sponge filter, capable of filtering a 20-gallon tank.

Provide plenty of hiding places so that either species can take refuge if they feel threatened, but also allow lots of free-swimming space so that your rasboras can enjoy hurtling around to their heart’s content!

It’s not always easy to find good tank mates for betta fish, but when it comes to compatible shoaling species harlequin rasboras come close to the top of the list.

Not only are they from the same habitat as betta fish in the wild, but harlequin rasboras are also hardy, peaceful fish that are unlikely to harm or be harmed by your betta fish.

As long as you have a large enough tank and your betta is not getting stressed by the lively activity of your rasboras, the two species should be able to live together amicably.

To check out our top pick of 20-gallon tanks that could accommodate both species, click here.