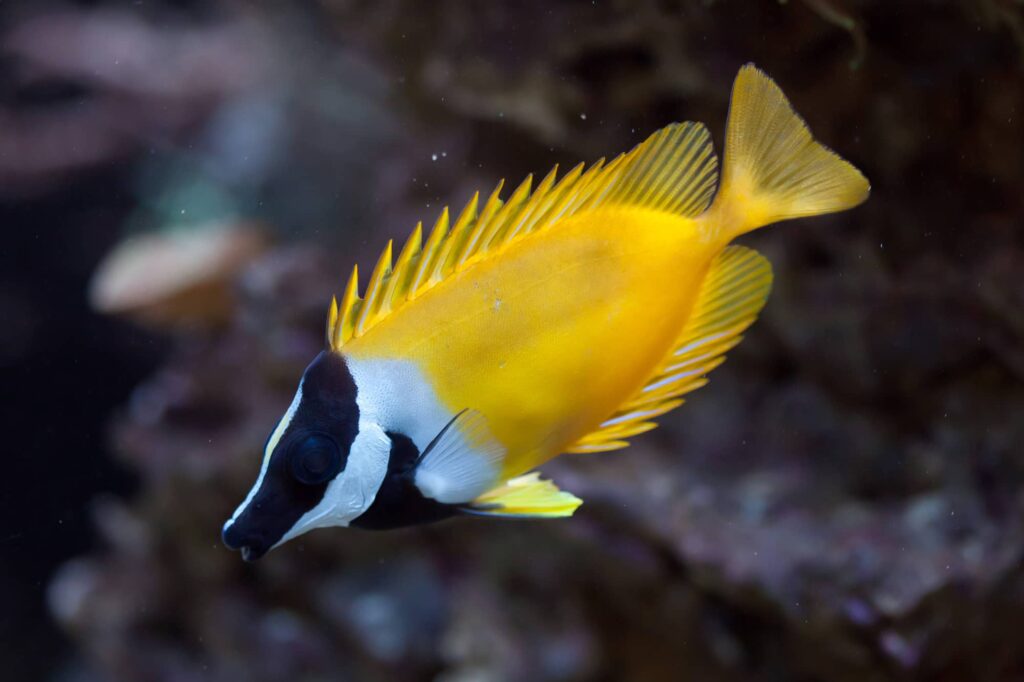 Foxface rabbitfish are interesting fish. They don’t really look like any other fish in the marine aquarium hobby, and they have some interesting behaviors.

If you’re an intermediate saltwater aquarium keeper, then a foxface rabbitfish might be the next best addition to your tank. Just don’t get too close to those venomous spines!

Keep reading to learn everything you need to know about the common foxface rabbitfish and how to keep one of these unique fish in your aquarium!

Siganus vulpinus is commonly known as the foxface lo, foxface rabbitfish, or just foxface. These docile fish belong to a relatively small genus of fish, of which not many are made available for the aquarium hobby.

Here are some of the most popular species of Siganus to come across:

Common foxfaces are most likely named for their extended mouth and black and white facial markings similar to a terrestrial fox.

The origin of the rabbit nickname is not as clear but may have something to do with their enormous eyes!

Foxfaces are native to the western Pacific Ocean, including areas of the Great Barrier Reef, Indonesia, and parts of the Philippines. Most recently, they have been spotted around the Tonga islands.

These fish live in shallow reefs among densely-packed staghorn coral polyps (Acropora cervicornis). They may be seen moving in pairs but are most commonly found alone; sometimes, foxface rabbitfish can be territorial, but this does not usually translate to the aquarium.

As juveniles, they school together to satisfy their appetite for marine algae among Acropora corals.

The foxface rabbitfish is unique compared to other marine fish species available in the aquarium hobby.

From their body shape to their bold coloration, these peaceful fish are something you don’t find in every fish tank, even though they’re reef-safe and affordable.

Common foxfaces can grow to a maximum adult size of about 9 inches (22.9 cm) long at full size. Their body is yellow apart from their face mask. This face mask is black and white, with black covering the eyes and the throat.

The most apparent feature of these colorful fish is their spiny dorsal fins. In nature, bright coloration is often associated with the animal being poisonous or venomous.

In the case of the common foxface rabbitfish, these dorsal spines contain venom, which can inflict some injury to predators.

Foxfaces are large, active fish. They need plenty of space to swim and graze on nuisance algae throughout the tank.

Because of this, these fascinating fish need a minimum tank size of 125 gallons (568 Liters). They don’t need anything special for decoration, but they naturally get a large part of their food from the rockwork, so live rock is strongly encouraged.

These fish are very hardy and will adapt to most marine conditions. Because of this and their compatibility with most other fish, foxfaces are often one of the first fish to be added to a new reef aquarium.

Yes, the rabbitfish species is considered a completely reef-safe fish.

Though they are unlikely to pick at corals and smaller invertebrates, specific individuals have been known to nip at corals, especially large polyp stony corals (LPS).

We recommended keeping your foxface well fed to help prevent it from getting an appetite for coral. As we’ll discuss later, they enjoy an assortment of foods, including nori seaweed.

If you see your foxface fish nipping at corals, try to increase feedings. It is possible that once your fish has a taste of coral flesh, it might not stop, and you may need to rehome the fish.

Foxfaces are interesting fish in terms of stocking. They are a peaceful marine species, but they can be kept with aggressive and non-aggressive species.

Here are some community fish that would get along great with a common foxface rabbitfish:

Here are some more aggressive fish species that could also be on the same tank mate list as your foxface:

Even though foxfaces might be able to hold their own against more aggressive species, this will largely depend on the size of the individual fish.

In general, predatory fish will try to eat whatever can fit into their mouths. This means that if your foxface rabbitfish is smaller than the mouth of your larger fish, there is the possibility that it will be eaten.

Don’t forget that foxfaces do have venom in their dorsal spine, though, which can defensively injure other aggressive fish in the aquarium.

Some hobbyists have found them to be very bold and right in the front of the tank with some of the most active tangs, while others see their fish hanging around the shadows of the rocks.

In general, a healthy foxface will have normal coloration and will be seen regularly picking at the rockwork and coming out when food is present.

These fish also have a strange behavior where they might look like they’re blowing bubbles at the water’s surface. This is thought to be an attempt at eating algae growing above the waterline.

If you find that your fish is gasping, breathing heavily, or struggling to stay near the surface, this might signify a deeper problem in the fish or the marine tank.

There is no way to determine how your fish will act in your reef aquarium, though there are a few ways to make it feel more welcomed.

Like freshwater fish, adding more hiding spots will make your fish more visible. This gives them a sense of security where they can retreat if necessary.

Good stocking will also help your fish feel more comfortable in its surroundings. Though foxfaces can be kept with a variety of temperaments, it’s important to look out for signs of bullying.

If your foxface rabbitfish is not being accepted by another fish in the aquarium, you might see some stress coloring appear.

Of all aquarium fish, foxfaces are one of the most likely to indicate stress through color.

It is important to note that these fish may also change color when sleeping. If the aquarium light just turned on and your fish looks paler than usual, give it a few hours to regain its color.

Foxfaces can dramatically change color at the first signs of stress. Their bodies will become blotchy, turning paler yellows and tans or even dark browns and blacks. This is to be expected when transferring a new fish to the aquarium.

However, this can also signify that disease or illness is setting in. If this color change is accompanied by lethargy, heavy breathing, or torn fins, the fish is probably sick.

If you notice that your fish is starting to change colors, is hiding more than usual, and has bumps and scratches, it might be getting picked on by other fish in the aquarium.

A healthy and happy foxface will have vibrant colors. You should take action to see what’s wrong as soon as any differences are noted.

Though these fish are hardy, they can quickly succumb to bullying and illness.

As mentioned before, yes, foxface rabbitfish are venomous.

Being venomous means that venom needs to be injected into the body through a physical process; this is different from a poison that must be ingested.

These fish carry venom in their dorsal spines, which have a very painful appearance on their own. This, in addition to their bright coloration, definitely gives predators a warning sign to stay away!

Not much is known about this venom, but it can cause localized painful stings and sensitivity. It is nearly unheard of to be stung by one of these fish in the aquarium setting, but some minor medical attention may be needed in rare circumstances.

Believe it or not, the foxface is a peaceful herbivore in the wild. They rely heavily on algae spots growing over coral reefs for their nutrition. In the aquarium, they’re a little more versatile.

Foxfaces should be fed a varied diet of meaty offerings like live, frozen, and freeze-dried marine foods like brine and mysis shrimp. They can also be given a high-quality saltwater fish flake or pellet as the staple of their diet.

However, these hardy fish are herbivores and need a good source of plant-based foods. Because of this, they should be kept in a mature reef tank that has a good coating of biofilm and other macroalgae.

Algae sheets, algae pellets, and algae flakes can also regularly be given to your foxface. They can even be given fresh vegetables, like cucumbers, lettuce, and zucchini now and then!

If you find that your foxface is picking at coral growth, then try to diversify and increase feedings.

Since foxfaces rely so heavily on lots of rockwork for their favorite food, they’ve come to have an appetite for less desirable foods.

For one, foxfaces are among the best livestock choices for dealing with a bubble algae problem. Bubble algae can be extremely difficult to remove, but a foxface rabbitfish will help eat fully formed bubbles and clean up any remaining bits.

Foxfaces have also been known to help control some glass anemone populations, like Aiptasia, though many hobbyists find peppermint shrimp the most effective.

Though foxfaces are great at taking care of these pests, they require a large aquarium. Never buy a fish to treat a problem temporarily!

Foxfaces aren’t one of the most popular fish in the aquarium, but their bright colors and versatile stocking options can make them the perfect addition to a larger tank setup.

These hardy fish will do best when there is a good amount of natural algae to graze on. They are generally reef compatible but might nip at fleshier, soft polyp coral if they are not fed enough.

If you have any questions about common foxfaces or other types of rabbitfish, or if you have had experience using foxfaces as pest control, don’t hesitate to leave a comment below!