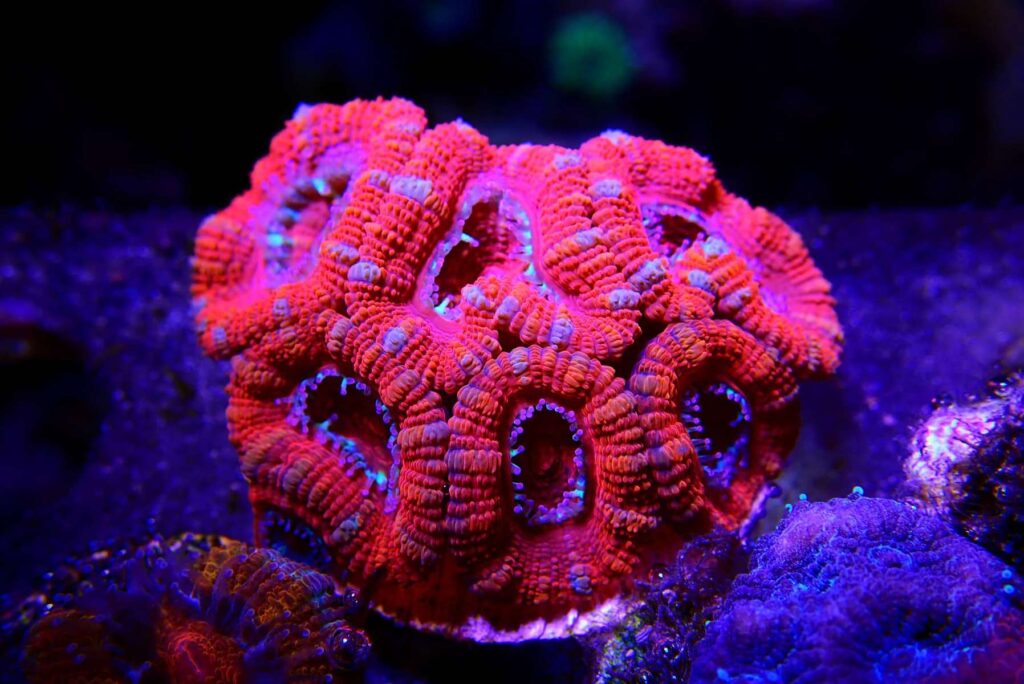 Acan corals are an understated coral. They are easy to care for and can bring intense colors to the lower portions of the tank.

Many designer varieties are available that can go for hundreds of dollars, though acan coral care is relatively basic in a well-established reef aquarium.

Keep reading to find out everything you need to know about acans and if you can keep this beautiful coral in your saltwater aquarium!

Acans are named after the genus they are classified under, Acanthastrea.

Several species are within this genus, though most acans found in the aquarium hobby belong to Acanthastrea echinata and Acanthastrea bowerbanki.

Micromussa lordhowensis (previously known and classified as Acanthastrea lordhowensis) is no longer technically a type of acan, but the hobby still primarily refers to them as acan ‘lord’ varieties.

As with many other corals, acans have been designed to display bright colors with unique names for better retail. Some examples of these are Tye Dye acans, Ultra acans, and Flamethrower acans.

For this article, we’ll mainly focus on those acan species most commonly kept in the aquarium hobby: Acanthastrea echinata, Acanthastrea bowerbanki, and Micromussa lordhowensis.

These corals originate from the tropical waters of the Indo-Pacific around Fiji, Australia, and Tonga, where they are found in relatively shallow waters (30-50 m) in large colonies.

Some species can be very aggressive, so they are usually found away from other corals.

Acans are very easy to tell apart from other corals. However, they may sometimes be confused with Blastomussa spp. or species of brain coral (Mussidae and Merulinidae families) to the untrained eye.

Acans come in many colors and patterns with blues, purples, reds, yellows, oranges, and greens. You can recognize them by their suction-cup appearance: the edges are round and puffy, and the inside is deep and flat.

Each polyp can grow around 1-2 inches (2.5-5.1 cm) across and can appear squished or circular depending on the species of the colony. If your acan is hungry, you will see tiny transparent tentacles come out from the rim of the inner disk!

Here are some of the differences between the three species of acan you’re likely to come across at the aquarium store:

These three species can be challenging to tell apart from one another, and their common names won’t help you figure out what kind of acan you have. Luckily, acan coral care is similar for all species.

Acans are generally an easy species of LPS to keep, but it might be difficult to get them to show their best colors because their appearances change with the light they live under, as well as their diet.

That said, their actual tank requirements are elementary and straightforward. These corals don’t require very high lighting (50-150 PAR) and can be kept under T5HO lighting, LED lighting, or any standard coral reef tank fixture.

The light intensity in your tank will significantly affect the long-term color of your acan. It is generally agreed that intense light can change and dampen the colors of acans, while lower-level lights will maintain their amazing colors and give the best contrast.

In most modern tank setups, acans are placed on the sand bed on a piece of rock that they can slowly encrust. If they are placed on the main rockwork, they will be left to spread as far as conditions will allow; keep in mind that this can make fragging much more difficult in the future.

We recommended you keep acans in areas of low to moderate flow. There should be enough water moving past their tentacles to catch food and remove detritus while staying gentle on the flesh of the polyps.

Acans do not require any particular water parameters but will do best in stable conditions. Along with 0 ppm ammonia, 0 ppm nitrite, and some nitrate, here are their preferred reef conditions:

As a species of LPS with a calcium carbonate skeleton, they will depend on calcium, magnesium, alkalinity, and other trace minerals to help build new structure and grow.

Acans like dirtier water, as do most other corals. Acans will thrive when there are available nutrients in the water column, like phosphate and nitrate. A healthy reef with never have 0 ppm phosphate or 0 ppm nitrate!

Dosing is unnecessary for acans, though it is recommended if you keep larger colonies or more demanding species, like large polyp stony corals (SPS).

Are acan corals easy for beginners?

While acan corals are a relatively easy choice for beginners, they’re not the best or the most popular choice. These corals are very slow-growing, and their changing colors might deter some hobbyists from adding more to their tank.

However, acans are very hardy and can withstand most changes in the tank. They also acclimate well to different setups, making for a fast addition.

Still, it is strongly recommended to have an established tank before adding acans and other LPS corals; if you are starting in reefing, try soft coral species first, like mushroom corals (Corallimorpharia order) and soft leather corals (Sinularia spp.).

You can keep acan corals with all reef-safe fish and invertebrates, including some of the most popular saltwater fish, like clownfish and tangs.

Though these fish usually won’t cause any direct harm to the coral, this can cause the acan to retract most of the time, which can impact the overall health of the coral.

That said, non-reef-safe invertebrates, like emerald crabs, should not be kept with acans. Not only will they cause the healthy coral to retract, but they may also start to tear at the delicate flesh of the polyps.

Angelfish, triggerfish, and pufferfish are not reef-safe and should not be kept with acans.

Acans getting along with other corals is another story. Though these corals don’t have long sweeper tentacles capable of stinging corals farther away, they are very capable of causing damage to other colonies waging coral warfare.

It is believed that Acanthastrea echinata are the most aggressive species of acan, but A. bowerbanki and M. lordhowensis should be given plenty of space too.

You should give these corals enough room to grow and spread without having to compete with other corals. Because of this, they are usually kept on rock islands away from other corals. This also protects the acan from being attacked by even more aggressive coral species.

Acan corals are one of the most fun corals to feed and will let you know they’re ready to eat by sticking out their transparent tentacles. This is especially common when the lights are dimming down for the night, though a healthy acan will expose them throughout the day.

These corals do not need to be fed and can sustain themselves with the nutrients from debris and fish waste in the water column. However, regular feeding has shown benefits to color, size, and coral growth rate.

You can give these corals an assortment of coral foods, like powders (Reef-Roids) or pellets, as well as live, frozen, and freeze-dried options. Acans will especially appreciate meatier coral food like Mysis shrimp, brine shrimp, krill, and even smaller fish pieces.

It is best to let your corals know they’re about to eat by placing a few pieces of fish food on the polyps. Once they’ve reacted, continue with the full feeding.

Be conscious of any invertebrates or fish that try to steal the food away from the can, as this can irritate the coral and cause it to close up for some time afterward!

How often should you feed your acans?

Acan corals can be fed once or twice a week, though some hobbyists feed them daily. They are an aggressive feeder and will eat when offered food.

They can be target fed or broadcast fed. Target feeding is effortless with acans as they can quickly move food into their mouths, which is usually a problem for other slower LPS, like Euphyllia spp.

Acans are generally slow-growing, so you won’t find it necessary to propagate your acan colony too often. That said, if you have a more desirable variety, you might want to frag it as soon as there are any signs of new Acan growth.

Fragging acans is relatively easy as these corals heal fast, though they are very susceptible to bacterial infections; to prevent disease, use a coral dip for increased healing or iodine after fragging.

First, you will need a bone cutter or an electric saw; an electric saw is much preferred as it provides a cleaner cut that makes healing easier for the coral.

When cutting the coral, make sure to cut around the polyp and not through it. Cutting directly through the acan will usually result in the death of that frag or slow down an otherwise fast healing time.

Once you have separated the frag from the colony, simply dip the coral and superglue (cyanoacrylate) the piece to a frag plug. After giving it some time to heal, move the pieces to their desired location in the tank or give them to another hobbyist.

How fast do acans grow?

Acans are not the fastest growers, though there might be some ways to speed up the time it takes.

In general, new acans won’t start to grow until they have been established in the tank for several months. Not only do lighting intensity and flow influence the color of your acans, but they can also encourage faster growth if conditions are ideal; remember that the brightest light possible isn’t always the best for your coral.

Many hobbyists have found increased growing speeds through regular feedings. If you are not currently feeding your acans and they’re not showing any signs of growth, try target feeding some food two to three times a week.

Where can you find acans for sale?

Acan corals have become very popular in the aquarium hobby. They are almost as diverse as zoanthids, making them incredibly easy to find in online stores as well as in your local aquarium stores.

Price will be determined by name, size, color, and rarity. Some hobbyists choose to go with bigger coral frags due to their slow growth rate, but a simple frag can cost as low as $15-$20.

The more desirable brand names can go for a couple hundred dollars or more.

Acan corals aren’t the most exciting thing to watch in a coral reef aquarium setting, but they’re a favorite of reef keepers. These corals need low to moderate lighting parameters and low to moderate water flow but don’t need any other special requirements besides a meaty diet.

If you have any questions about acans, how to get your acan to intensify in color, or have had experience dealing with other wild species of acan, don’t hesitate to leave a comment below!