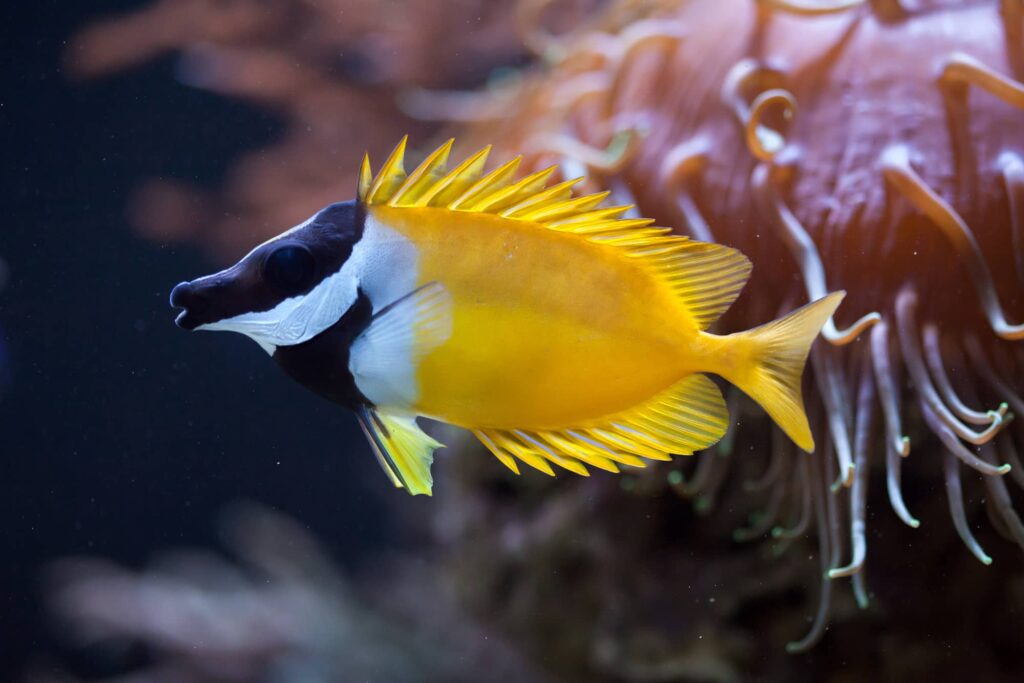 Is yellow your favorite color? Or are you looking for a pop of color to add to your saltwater fish aquarium?

Yellow is one of the more desired colors in the reef aquarium, as not many fish are that color. Luckily, there are a few options of yellow reef-safe fish to choose from that might be just right for your marine setup!

Keep reading to find out some of the most popular species of yellow-colored saltwater fish and their specific care requirements!

The best yellow reef fish for your aquarium

You should note that while a tank full of yellow might be desirable, it’s not very possible because fish species that are similar-looking in body shape and color often become aggressive towards each other. This is not the case for all the fish on this list, though.

To provide the best selection possible, we have also included some species of fish that are not entirely reef-safe.

The yellow tang is undoubtedly the most popular yellow fish in the saltwater aquarium hobby. These fish make bold statements in any marine setup and are even more impressive when kept in schools.

Yellow tangs are reef-safe and are great at keeping rocks free from algae. They are extremely active and need plenty of space to swim and graze freely.

Too often, a yellow tang is shoved into a too-small tank. As a result, they often die within a few months of having them.

To give your yellow tang the best life possible, always make sure you have the proper setup before bringing it home; even if you plan on upgrading, it’s not recommended to purchase your fish until the new tank is physically set up.

The yellow longnose butterflyfish gets its popularity from its debut in the animated Pixar film Finding Nemo. These fish are short and stout with a large yellow body and grey and white masking.

Although popular, this variety of fish is not the best choice for beginners because adapting them to an aquarium diet can be challenging.

Hobbyists usually need to try an assortment of live foods and then slowly introduce them to other options. This can sometimes lead to the fish starving over a couple of months unless a live food culture is used.

Only introduce a yellow longnose butterflyfish into a mature system to help prevent this from happening. You should note that these fish are largely considered not reef-safe.

Foxfaces, more specifically one spot foxfaces, are another species of colorful fish commonly found in the home aquarium.

These marine fish are incredibly helpful to have around coral reef ecosystems as they deal with many pests, like bubble algae and even Aiptasia.

Though foxfaces are regarded as being reliably reef-safe, some individuals have been known to go after zoanthids and other polyp corals, so caution is needed.

You should also note that these fish have venomous dorsal spines, and they need to be handled with care. However, there are few to no reports of hobbyists being stung by their foxface.

The clown goby is named after the unique blue markings around its face and gills. They have an orangey body instead of entirely yellow, though we thought they were close enough to make this list!

Clown gobies are very popular in nano tanks with soft corals. There is some discussion about whether or not these fish are entirely reef-safe, though.

For the most part, they are good additions to smaller mixed reef display tanks as long as behaviors are closely monitored.

Named after the bird with the same bright yellow body, the canary wrasse is a simple yet bold addition to the aquarium.

These fish are very slender but can grow to be considerably long. As with all wrasse, the canary wrasse likes to sleep and hide in the sand bed if it feels threatened. Otherwise, they are active fish that will graze on invertebrates in and around the rockwork.

Though canary wrasses are reef-safe, they may not be safe with smaller invertebrates.

The lemonpeel angelfish is a beautiful fish, though they are a little more challenging to keep than your more popular angel species.

This is because these fish tend to be more aggressive than other dwarf species, more difficult to get eating anything other than live foods, and are the most likely to start nipping at corals.

However, if you give them the space they need to establish a territory and get them eating, they can be very hardy saltwater aquarium fish. On the other hand, the chance of them eating your corals never goes away.

Another option for colorful angelfish is the plain yellow angelfish (Centropyge heraldi), though the lemonpeel seems more popular.

If you’re looking for something a little different, the longhorn cowfish will definitely bring some yellow excitement to the aquarium. However, they’re a difficult fish to keep and need pretty exact tank conditions.

If stressed, these fish can excrete a unique toxin called ostracitoxin (now known as pahutoxin).

These fish grow big. While they grow smaller in home aquariums, they still need large saltwater setups that can handle their immense size and personality.

On top of that, they need minimal water flow. They are not the best swimmers and will appreciate not having to struggle against strong currents.

Only keep docile tank mates that won’t bully or outcompete your cowfish for food. Regular, heavy feedings will help ensure they’re getting enough to eat.

Cowfish are likely to pick at corals, though they have successfully been kept in reef setups. They are especially susceptible to aquarium-born diseases and illnesses, so it is important to quarantine them and acclimate them slowly to new systems.

Cubicus boxfish are very similar to cowfish but might be a little cuter, with small black polka dots on their bright yellow bodies. Don’t let their appearance fool you, though! These fish are challenging to keep.

In general, these fish need low flow, docile tank mates, and a healthy food supply. Their natural habitat consists of coral and rocky reefs. They are also susceptible to common diseases and illnesses and need to be acclimated slowly.

Like cowfish, these fish also carry ostracitoxin (pahutoxin), which can be excreted at any point if stress levels increase.

As you can see, there are plenty of fish species that can be the yellow centerpiece of your aquarium! Though they all have different tank requirements and care, these marine fish are relatively easy to keep in the home aquarium if given the proper reef setup.

As always, make sure to research the fish you plan on bringing home thoroughly before impulsively buying them (especially those small boxfish)!

If you have any questions about the many yellow fish on this list or would like to see another color selection, don’t hesitate to leave a comment below!