New Tank Syndrome: What It Is And How To Avoid It 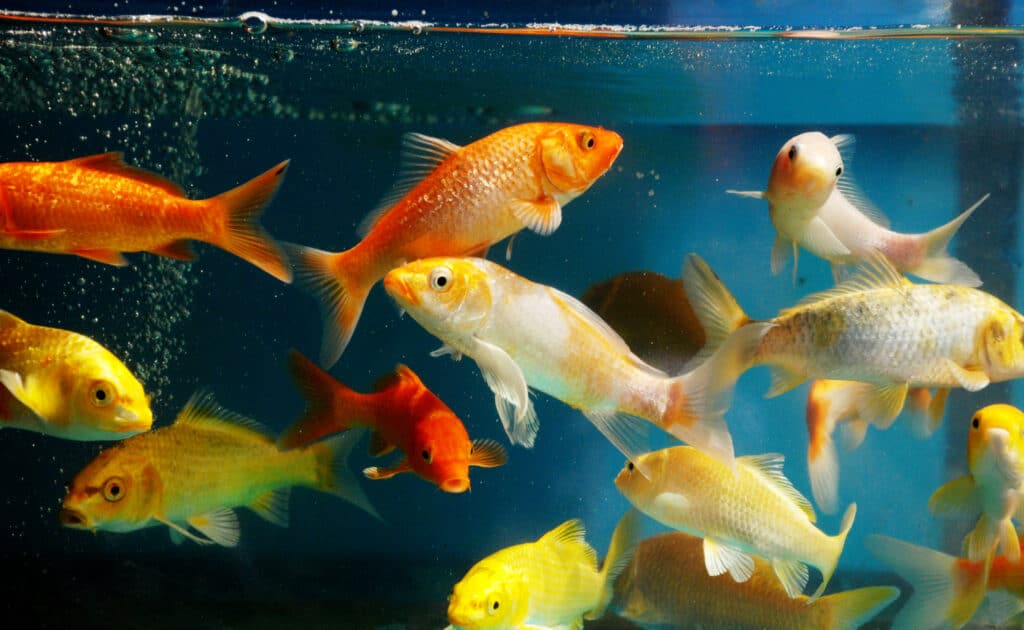 Poor water quality is the biggest killer of pet fish, and new tank syndrome (NTS) is one of the most common causes of bad water in your fish tank. Overzealous cleaning of an established aquarium and filtration system can cause NTS, too.

Did you know that new tank syndrome doesn’t just affect new setups? No one is immune to the disastrous effects of NTS. Commercial fish breeders, fish stores, experts, and even the largest public aquariums on the planet can all be at risk.

In this article, we explain what causes new tank syndrome and how you can prevent it.

What is new tank syndrome (NTS)?

All fish tanks, both coldwater and tropical, need to be allowed time to become established before you can introduce a full complement of fish.

NTS typically occurs when that time period is not observed, and too many fish are introduced too soon before the nitrogen cycle has become established.

New tank syndrome starts as the fish begin to produce waste that accumulates in the water. In an established, properly cycled tank, the nitrifying bacteria that live in your biological filter media consume and process that harmful waste, transforming ammonia and nitrites into less toxic nitrates.

However, those bacteria take many weeks to proliferate and become numerous enough to cope with the amount of waste that the fish produce. So, if you add too many fish too soon, the filter becomes overloaded, and the water turns into a toxic soup.

Weekly partial water changes can help to remove nitrates from the water while living plants also use harmful chemicals as fertilizer. However, too many water changes and overzealous tank cleaning can deplete the levels of the very bacteria that you need to grow.

How does new tank syndrome kill my fish?

The waste products that fish produce is highly toxic, particularly ammonia, which is extremely caustic. However, other parameters at play will influence the effect of ammonia on the fish’s health, like water pH, water hardness, and temperature. For example, a tank that has very warm, alkaline water is far more dangerous to your fish than an acidic, cooler setup.

High levels of ammonia in the water inflict chemical burns on your fish, especially on their delicate gills.

Fish suffering from the effects of living in an environment with very high levels of ammonia will gasp for air at the water surface, eventually suffocating when the damage to the gill tissue becomes so severe that the fish cannot breathe.

Nitrite is another very dangerous chemical that is produced during the processing of fish waste. Nitrite kills by changing the blood chemistry of the fish, overloading the blood with methemoglobin that inhibits hemoglobin’s ability to take up oxygen. Methemoglobin sticks to the oxygen molecules, preventing its release into the fish’s body. Effectively, the fish then suffocates from within.

What are the symptoms of new tank syndrome?

You can’t spot NTS simply by looking at your tank. The only way to know if the water is bad is to test it using an aquarium test kit.

That said, your fish will also tell you when the water quality in their tank is poor.

Symptoms of NTS to watch out for include:

Any sudden deaths where no obvious external symptoms are apparent are often due to poor water conditions. Some fish species, such as gouramis, are especially sensitive to poor water, acting as a canary in a coalmine and alerting owners to problems before their tank mates are affected.

Why does NTS last so long?

It takes the bacteria that process ammonia and nitrite a considerable time to become established in the biological filtration media. Too much waste in the water also inhibits the bacteria’s growth rate. The bacteria also require high oxygen levels, which they won’t get if the tank is overcrowded with too many fish.

But the biggest bacterial growth inhibitor is generally attributable to the incorrect or too-frequent cleaning of the filter medium. As well as using the sponge or other media within the filtration system, bacteria grow on the substrate, plant leaves, decorations, and other surfaces within the tank.

So, if you keep your tank too clean, you risk killing the very bacteria you need to make a safe and healthy aquarium for your fish.

Does your aquarium have new tank syndrome?

Before you can treat NTS, you need to recognize that it’s affecting your tank.

Test the water in your new tank before adding any fish. Also, if you have a mature aquarium and your fish appears to be under the weather, your first action should be to test the water.

The ammonia and nitrite levels should be ZERO. Anything above that is dangerous to fish and other aquatic life. Even levels as low as 1.0 ppm (parts per million) can kill your fish and will make even the hardiest fish species sick.

Ideally, nitrates should be below 20 ppm. However, in some areas, tap water has nitrates at that level, although nitrates up to 40 ppm generally tolerate most fish. Often, carrying out weekly partial water changes and keeping live plants in the tank can be all it takes to keep nitrate levels down.

How to give beneficial bacteria a helping hand

Like your fish, the beneficial aerobic bacteria in your tank need oxygen to breathe. You can help to boost oxygen levels in the tank by adding an air stone or bubbler to the setup.

It can be beneficial to add aquarium tonic salt to the water. Aquarium salt detoxifies nitrite and aids the fishes’ breathing. Follow the manufacturer’s directions for dosage.

In case of an emergency, if you have another established tank, transfer the fish from the aquarium that’s affected by NTS. It’s also a good idea to run two filters in one tank. That way, if NTS occurs, you can transfer one mature filter to the affected tank to consume the ammonia and nitrite naturally.

How can I prevent new tank syndrome in a new setup?

To prevent NTS in a new aquarium setup:

Why does NTS sometimes happen in a mature tank?

Although it shouldn’t affect an established tank, NTS can sometimes strike in a mature setup. That usually happens if the fish keeper makes one or more of these rookie errors:

Tap water contains chlorine and or chloramine, both of which will kill bacteria. If you wash your filter media under the tap, you’ll kill the nitrifying and aerobic bacteria, reducing the effectiveness of your biological filter.

Instead, use a bucket of dirty tank water to wash the filter media and sponges before replacing them in the filter unit.

Replacing all the filter media at the same time

Although you do need to periodically replace your filter media as it begins to degrade, you should never change the whole lot at once. If you throw out all the filter media at the same time, you’ll be discarding the bacteria too, and that could cause NTS.

Change your filter media in stages, ideally over a period of a few weeks. Squeeze the old media against the new stuff to transfer plenty of the bacteria and get the new colony off to a good start. You may also want to add some filter boost to the tank.

Carrying out a super-clean

Although you should keep your aquarium clean, you can damage the delicate balance of its ecosystem by being too efficient and carrying out a super-clean!

Beneficial bacteria live on every surface within your tank, including the substrate, glass, décor, and even on your plants. Bacteria also live in the water. So, if you strip the tank down completely and carry out a total water change, you’ll lose massive amounts of bacteria. That can lead to ammonia and nitrite spikes and NTS.

If you do need to strip down your tank, rinse the substrate in old tank water to remove loose waste and detritus, but don’t replace it. Also, retain all or some of the old filter media so that you don’t lose all the beneficial bacteria that you need to process the ammonia and nitrites produced by your fish.

New tank syndrome can last for anywhere between two and 12 weeks. You must test the water for ammonia and nitrite throughout that time so that you can see when the nitrogen cycle is complete, and it’s safe to add a few fish.

How to manage a new tank

When you add fish to your setup, be careful that you don’t overfeed them. Excess food creates higher levels of waste, putting pressure on your biological filter.

Get into the habit of carrying out small, frequent water changes. That helps to dilute levels of ammonia, nitrites, and nitrates in the water without stripping out the colonies of bacteria that you’re trying hard to establish.

Start by adding a few starter fish to the tank. Test the water every couple of days for the first two weeks, and once levels of ammonia and nitrite remain at zero, you can add more fish.

Remember that even mature tanks have a finite limit when it comes to the number of fish you can have. Adding “just one more fish” that you absolutely must have can have a disastrous effect on the environment in the tank, overloading the filter and triggering NTS.

As a general rule, you can have one inch of fish per gallon of water in your tank. However, you’ll need to allow more water volume for, especially messy fish species.

New tank syndrome can affect both new and established setups if the balance of beneficial bacteria in the filter media and tank is out of kilter and can’t cope with the amount of waste produced by the fish.

The key to managing your aquarium and avoiding NTS is to ensure that the tank is fully cycled before adding fish. Don’t overcrowd your tank, regularly carry out filter and tank maintenance, and avoid overfeeding your fish.

Follow these guidelines, and both your fish and the beneficial bacteria in your filter media should remain healthy and happy!